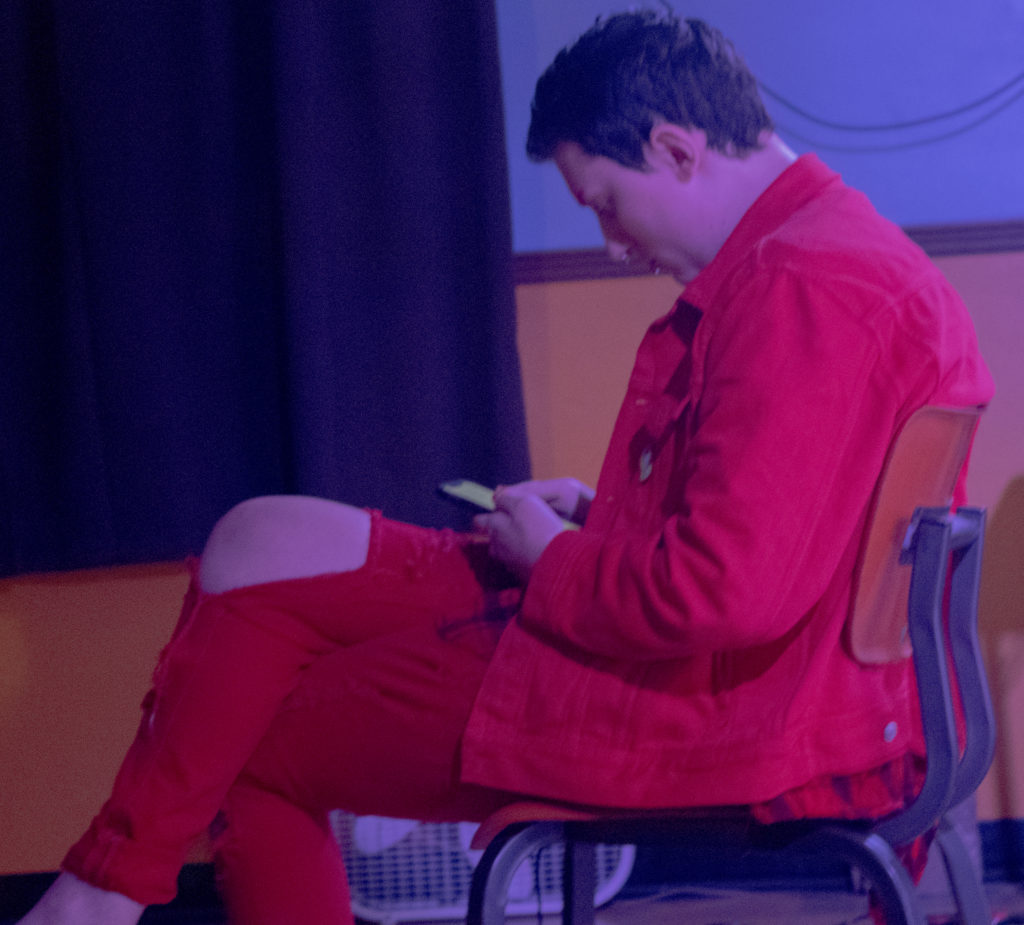 Similar to my last review, it was a complete last-minute decision which led me to attend the October 5th evening show featuring two local acts, and three from out of state at the Trunk Space. Not only has Aaron Ponzo from Yipee given me some of my favorite shots in my developing days of photography, but I am continually impressed by the acts his “Aaron Ponzo’s Soda Review” (which is not only a blog, but also an event organizer, apparently) brings into house shows and local venues.

Like my former experiences, I went into this evening completely blind to the genres of music and concepts of art I would experience; my initial excitement came purely from the out of state presence donated by Curt Oren and Real Dom from Iowa (although the above abbreviation from Curt denoted Chicago), with Belly Eater on tour from Ohio. With my boyfriend in tow, I couldn’t help but write this review with slightly more sobriety and optimism than previous occasions.

While I am always privy to avant-garde performances, nothing prepared me for what I would experience with the project and artist under the title of Bxnshy. As if a ghost from my past had reappeared, I could have sworn the figure dressed in red resembled an eccentric acquaintance I had met only a few years ago at an LGBTQ youth-group meeting. Whether or not this was the same person who blocked me on Twitter for reasons I can’t remember, nothing prepared for me for what this individual had in store.

After the beginning of the show was announced, the red-clad individual sat down in a simple plastic-metal framed chair, and proceeded to stare at their phone while upbeat electronic elements blared through the lime-green speakers. I stood in the crowd with my camera in hand, unaware the show had started. About a few minutes into the set, I realized this was the show. After understanding this would be their final physical position, I began taking tepid photos, and silently shifted uncomfortably between shots, wondering if this was the kind of art installation where I would be assaulted in blind rage if I were to publicize what I just saw.

As the set rolled forward, the music clearly encouraged dancing, but the phone activity from the performer only encouraged others to do the same. Whether it was intentional or not, I found myself frozen in anxiety, waiting for them to make one nod of approval to the audience in order to tell us, the audience, things were going great. One thing is for sure: the music Bxnshy produced in this live setting was not an issue, and much of the crowd found entertainment within the combination of various electronic and organic sounds; but, I couldn’t help myself to wonder if others found similar feelings as I with the strange combination of infectious electronic riffs and a stoic persona. 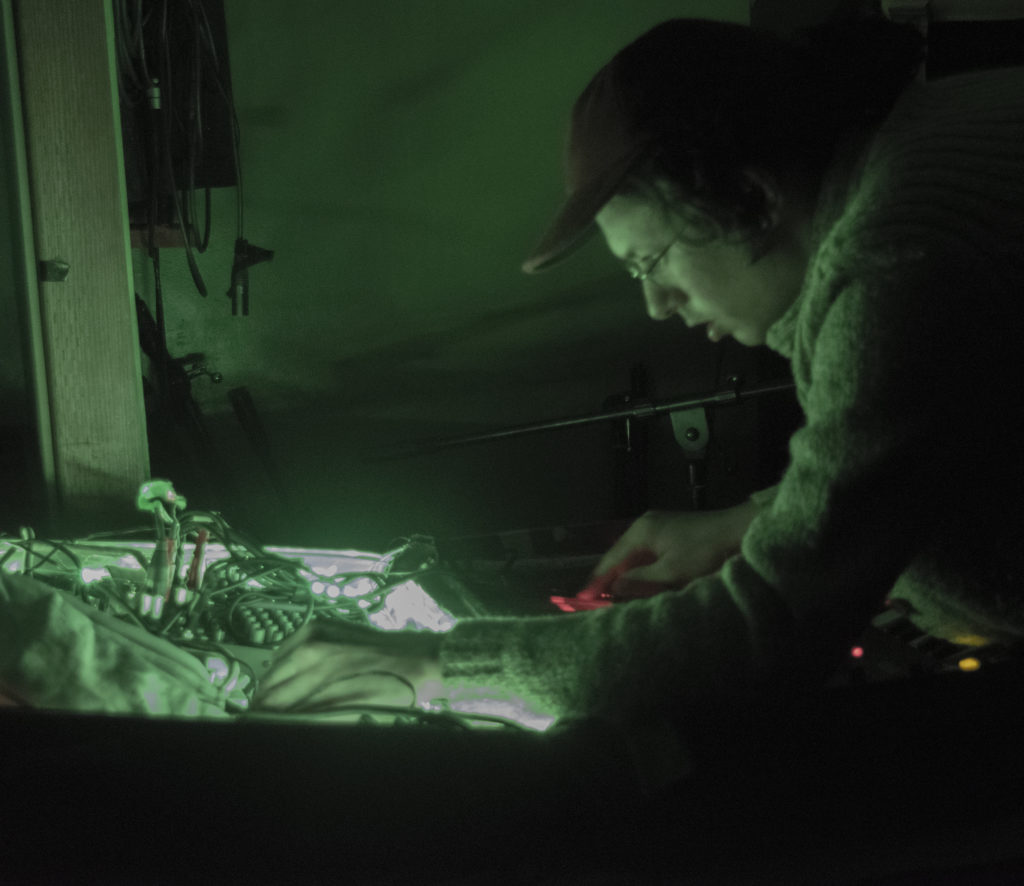 After Bxnshy gracefully segued from the stage, Belly Eater from Ohio pulled an electronic menagerie from his suitcase in order to set-up by the older, more analog piano. Dressed simply in a cardigan with short-shorts (the indie man’s “style-of-the-moment” piece), this was certainly a performer my partner understood better than I. In his own words, it was conveyed that the early use of the piano and the eventual inclusions of raw electronic noise fed through his synth told more about emotion than lyrical story.

From my own experience in dating a fan of the noise genre in the past, I did find an appreciation with the well-timed piercing screams which would punctuate certain parts of a track. While I did pick up small riffs of brighter synth sounds, most of this big-time production which exuded from this small, magical case produced more lower tones than the former. Much of the material were far from melodic, but the grungy, gritty synth and percussion tied the set together in this hellscape of modern America. Thank God I never forget earplugs after that RNA performance at the 2018 Crak Fest. 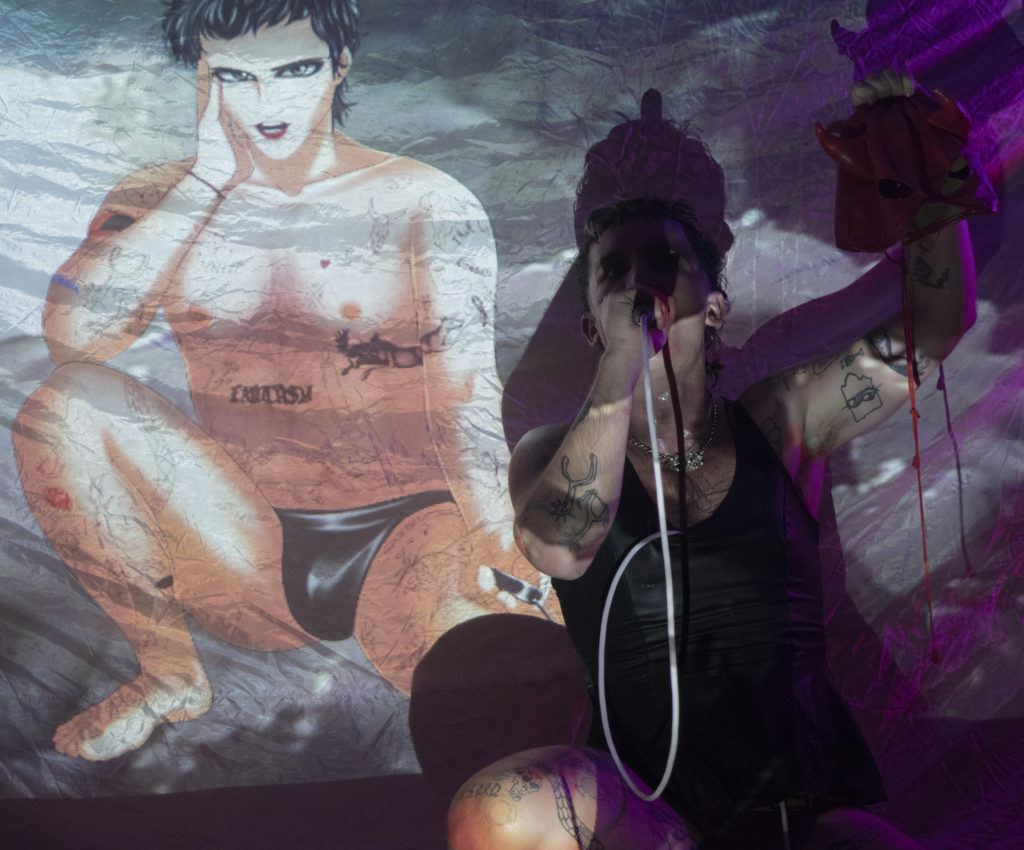 In a weird vision of Chippendale glory mishmashed with gutter-punk sensibility, emerged Dominic, better known to us as the “Real Dom.” Under a flurry of fast-paced straight-up punk-rock emerged a modern version of Dr. Frankenfurter from The Rocky Horror Picture Show. Dom equipped his show with full projected visuals, choreography (many classic stripper moves included), and a slew of costume changes which littered the short-but-sweet set. Even as a sexually liberal gay man, I was stunned. This was not simply a gentleman caller who exposed his assets for the approval of others, but a very modern and masculine rejection of those who dared to take away his power. 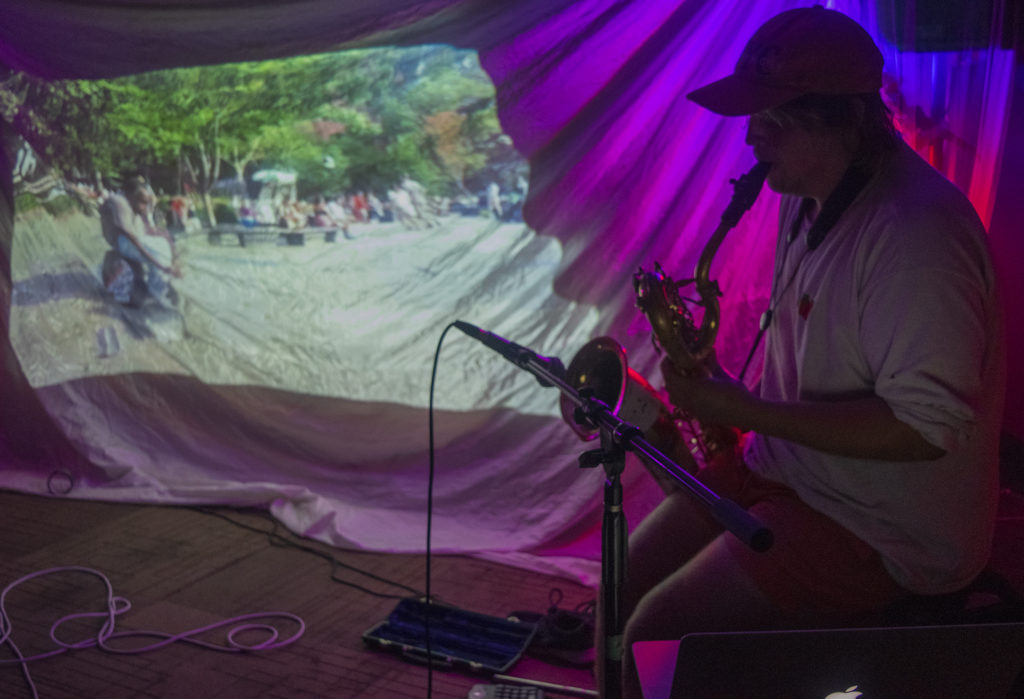 Curt Oren took the stage with sexy saxophone in hand with a slightly sardonic sense of humor. Moments before in an earlier set, Curt comically lamented his quest to get in my way as a photographer. Fortunately, my attitude of a battered DMV worker took his genial humor lightly without much harm; this humor would carry him throughout the set. Like Real Dom before him, Curt utilized the projector and displayed mix media images relating to his life and the ambient music. Described as “experimental” saxophone, the ambient riffs of (what I believe was) the baritone saxophone provided lush tones to the in-between narratives.

Like a true showman, less is more: Curt engaged with himself in a humorous pre-recorded section where the video version of himself gives the living version advice on how to make a great show. It’s a cute narrative to add levity to an otherwise deeper evening, whether it be the relationship to his father or the love he had for his canine friend. Curt Oren has a much more approachable swagger than most artistic types and had no problem relating to the crowd. Instead of a hardcore mosh on your feet, Oren encouraged the crowd to sit in James-Taylor-like circle time and enjoy the set. 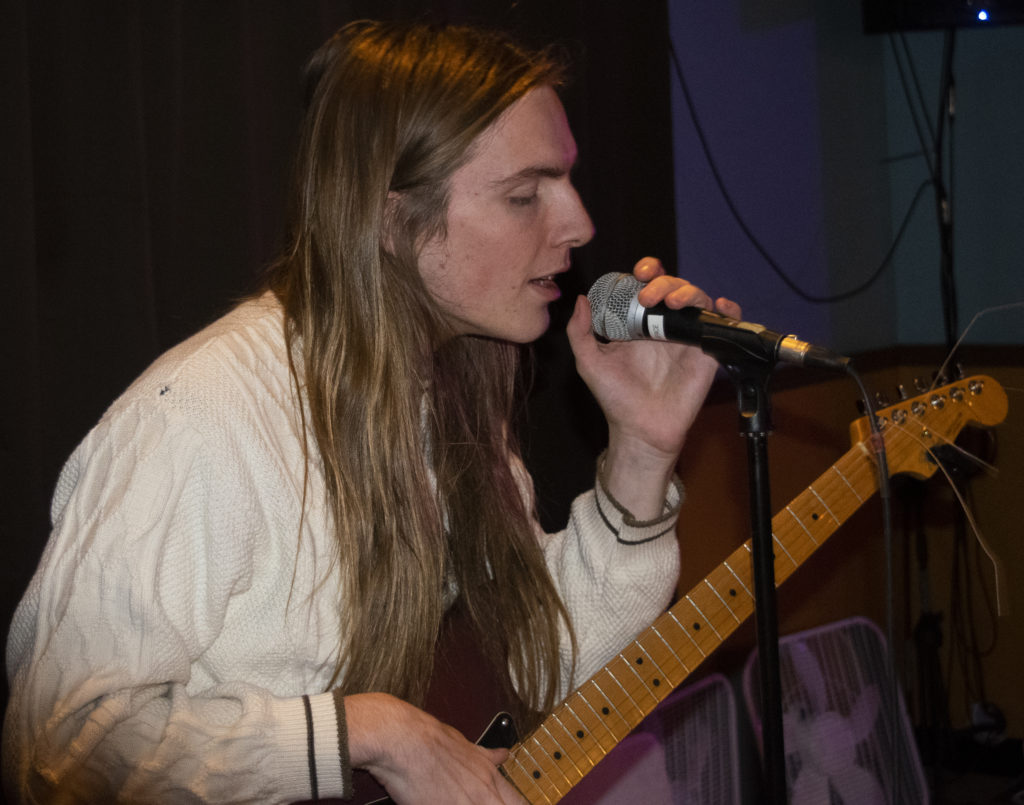 Instead of taking the main stage, Aaron Ponzo of Yipee brought his DIY guitar-and-Macbook setup to the center of the room, under fluorescent lights shifting the crowd’s attention to front-and-center. As mentioned above, I genuinely enjoy getting shots of Aaron / Yipee. Unlike some stand-still performers on the DIY circuit, Ponzo has a knack for getting the crowd up-and-about with his bubbly enthusiasm and continual bobbing around.

As mentioned in previous reviews of live shows, Aaron flourishes under moments of improv. The crowd took strange delight to the haphazard setup and execution of his short romps and ballads. Although most of his tracks would last hardly a minute, much of the lyrics are like a haiku, and say a lot with little exposition. The persona and sound of Yipee is something alien I have never encountered; an artist who has the ability to write short melodies while keeping the crowds attention by simply being himself. Hovering between a strange union of lofi pop and pop-punk, Aaron didn’t need to tell any jokes or tell us about himself to get the crowd on his side; it was refreshing to know that sometimes being yourself could be the best artistic direction. 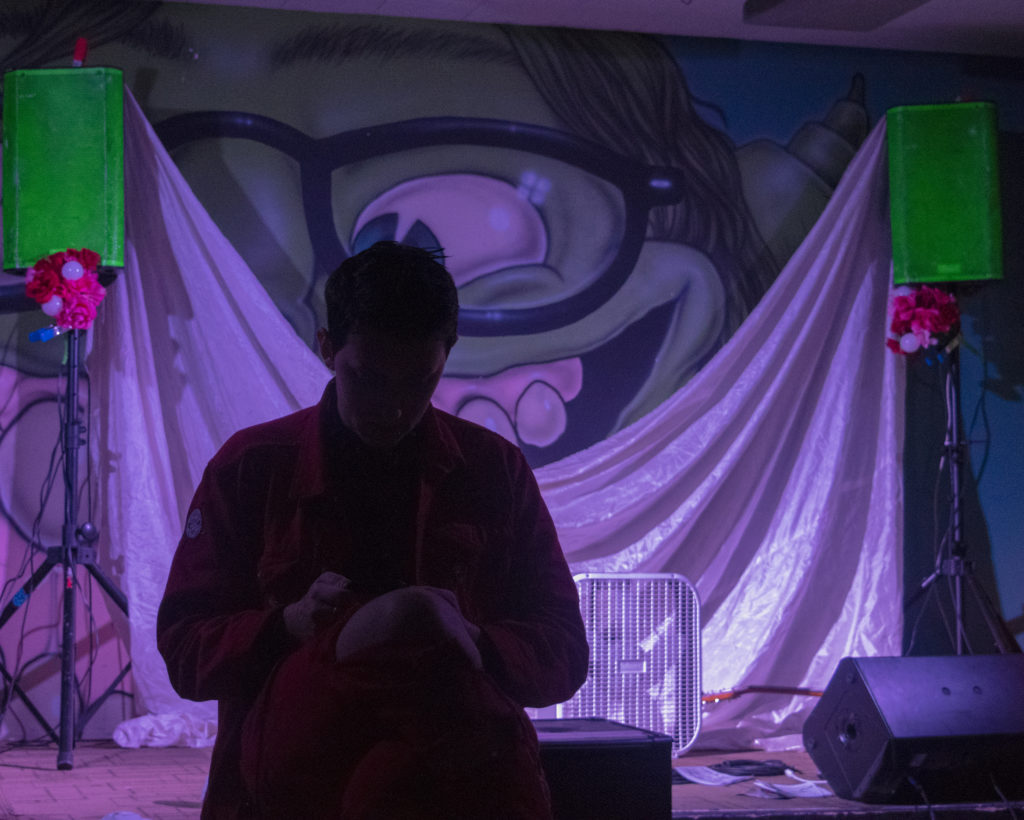 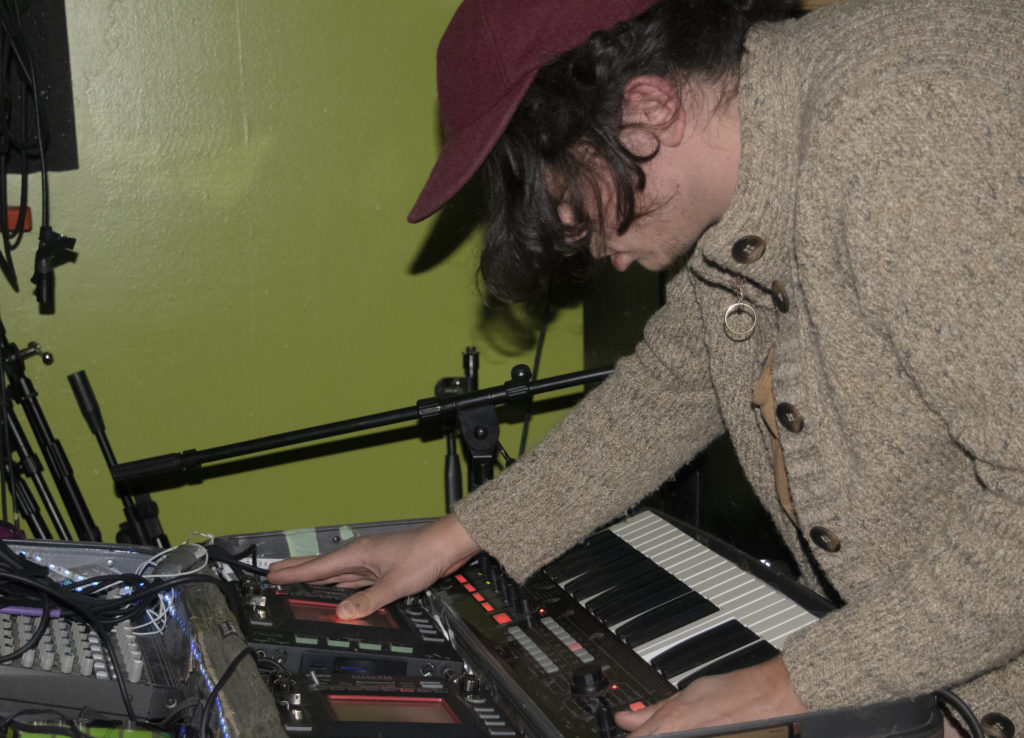 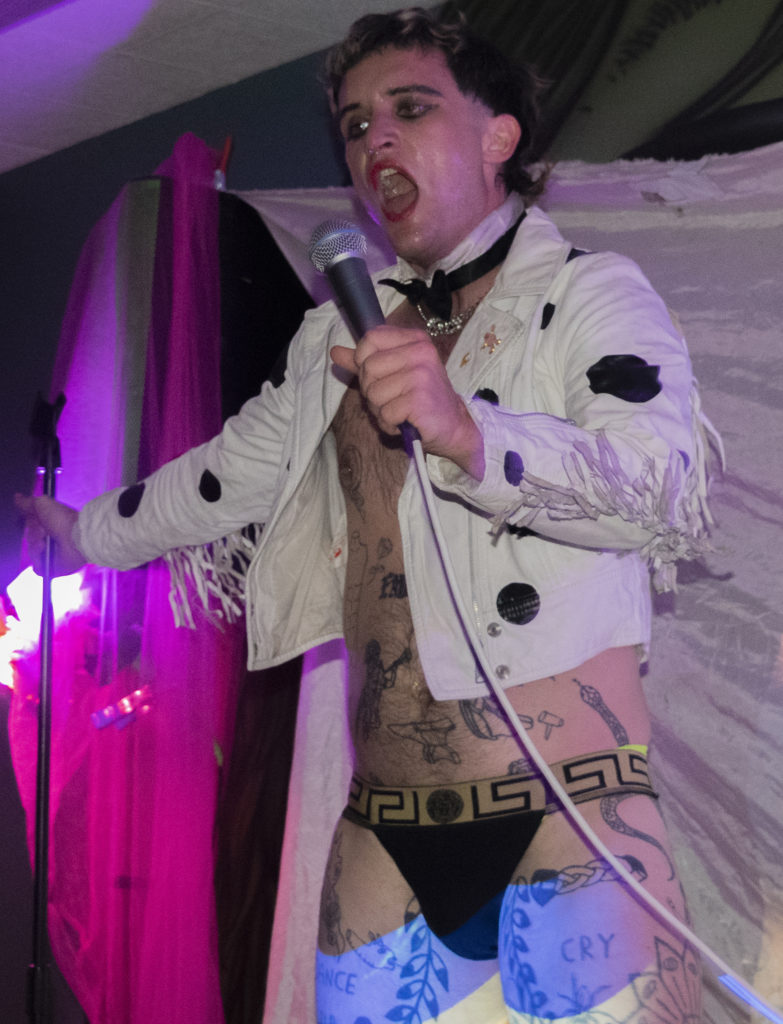 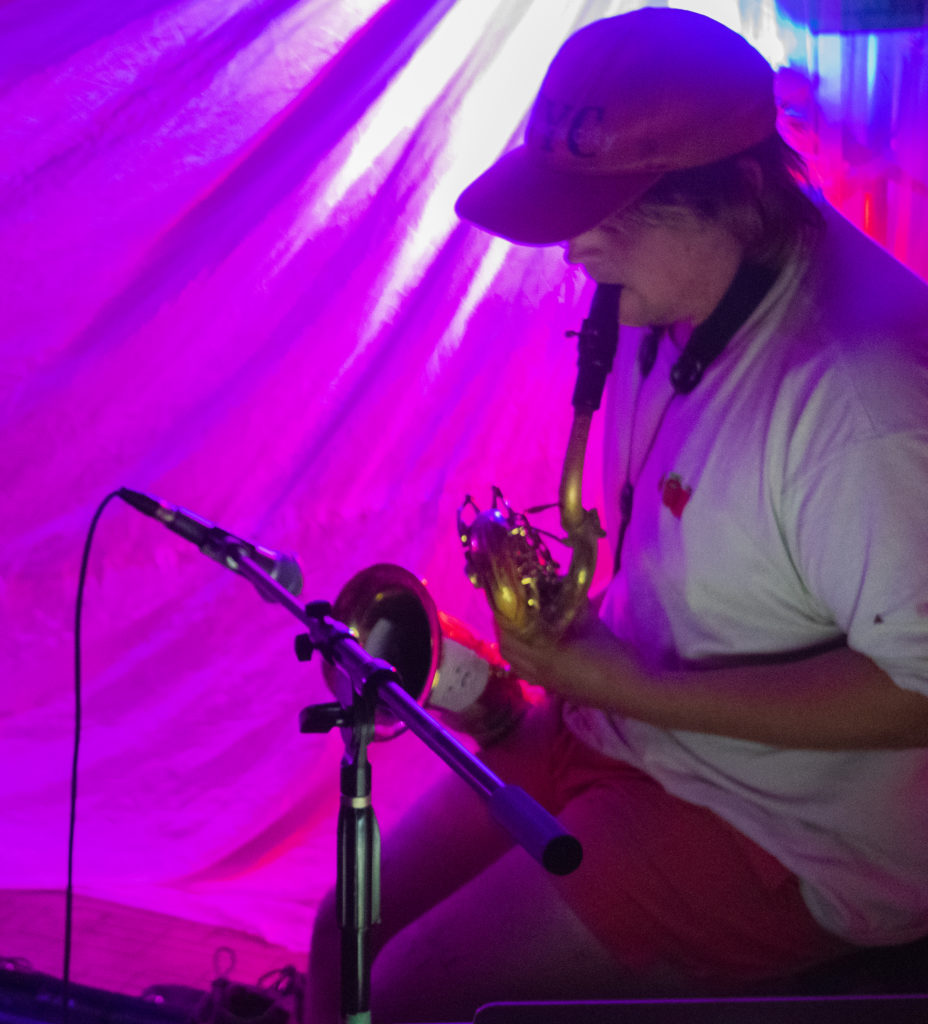 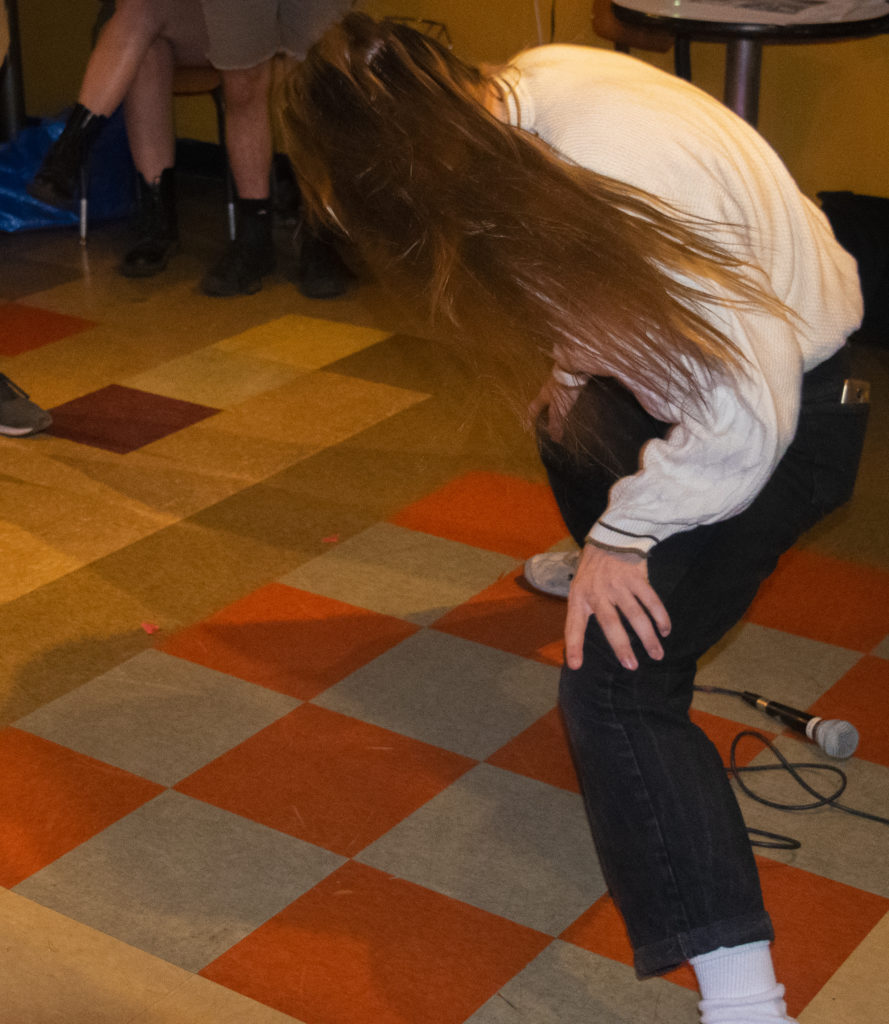 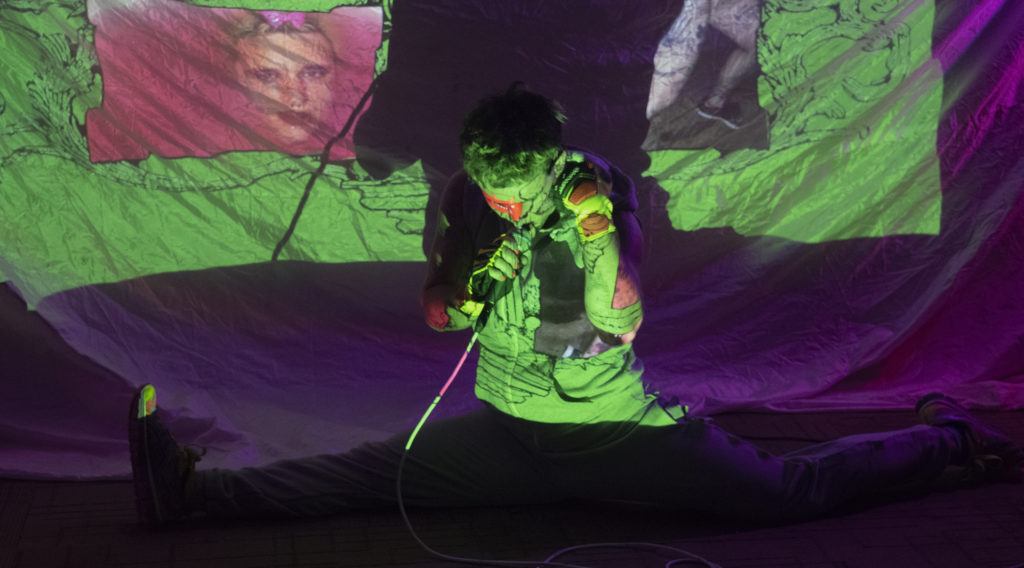 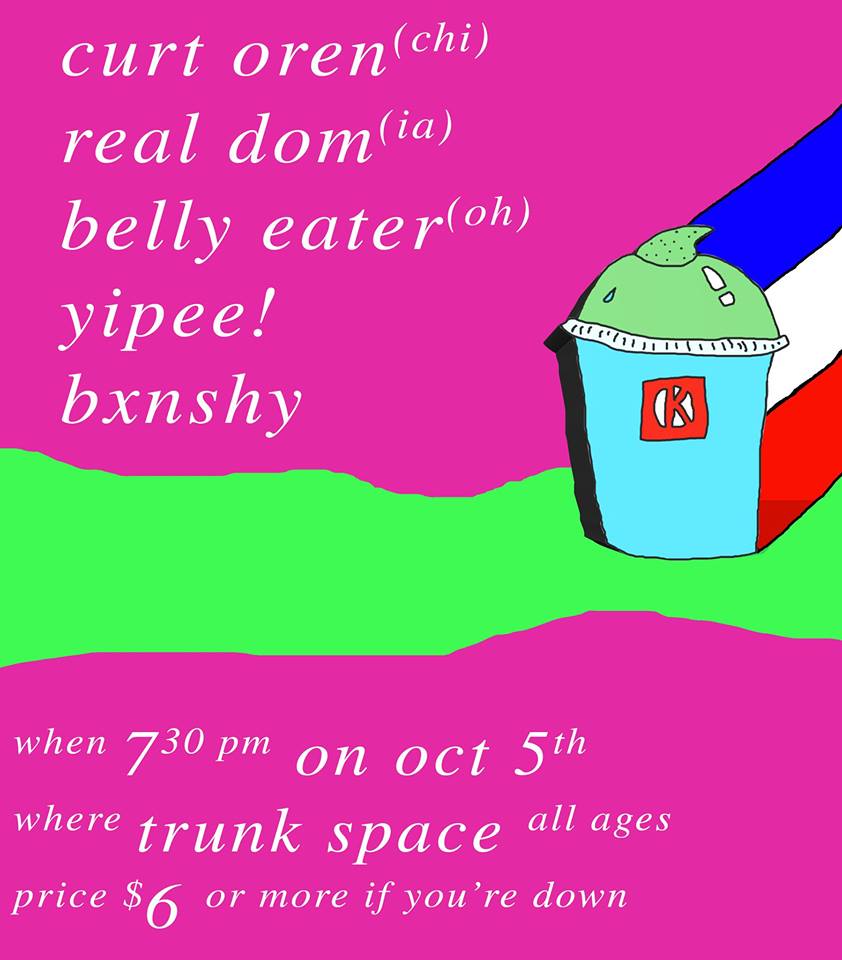