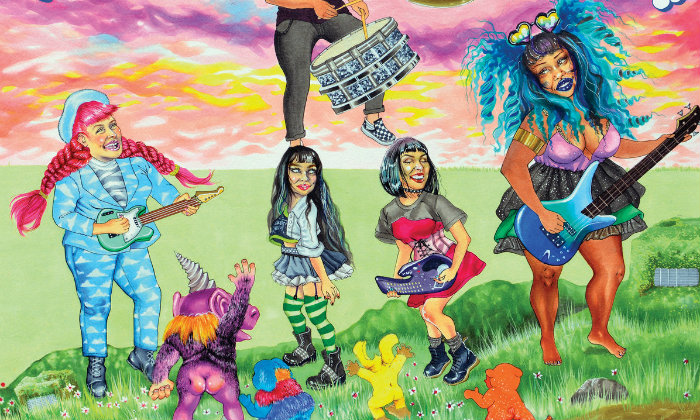 Fatty Cakes and the Puff Pastries

Maybe you caught Fatty Cakes and the Puff Pastries at The Trunk Space when the band cruised through the PHX. If not, you’ll hopefully have more opportunities to come with the impending release of the band’s new LP. Fatty Cakes and the Puff Pastries will be dropping their s/t debut on slick, colorful vinyl next month through Emotional Response Records out of Flagstaff. AND Alice Bag stepped in as producer for these feisty Fresno newcomers. The band unveiled “Panic Attack”, the first track from the new album, early to offer up a sampling of the Fatty Cakes sound: fun, summertime, garage grrrrl, pop punk. “Antifa Cakes” is also available for early listening for everyone who wants to drive around  singing, “Fuck you and your Neo-Nazi Friends”… which should be, like, everyone. Check out the new singles and join me in the wait for the Nov. 9th release of the complete LP. In the meantime, don’t forget to jump on that pre-order option while you still can!

“All Over the World”

Take Phoenix surf rockers, The Rebel Set, and stick in (Matt Rendon’s) Midtown Island Studio down in Tucson and good things are bound to emerge. Smidgen Pigeon came out on Sept. 28th AND THE VINYL EDITION IS ALMOST SOLD OUT. Srsly, by the time this article publishes, you might already be stuck with the digital-only edition (until that reprint happens). “All Over the World” kicks off the LP but fans of the band’s retro chic garage rock are going to love every song from the opening guitar riff to the closing track. The Rebel Set has some shows coming up on their hometurf and in SoCal so check make sure to check your calendars for the opportunity to catch them live.

This LA art-punk act comes with quite a stellar cast including Emilia “Pony Sweat” Richeson (dance, drums, vox), Gina Young (bass, vox), Patty Schemel (drums) and Megan Fowler-Hurst (dance, drums, vox) with violinist turned punk singer, Paris Hurley, at the helm. “Pom Pom Moves” is raw and unrefined, in all the best ways. The perfect vehicle for helping you release all that post-Second Wave malaise with some ferocious feminist punk. “Pom Pom Moves” is the second single from OBJECT AS SUBJECT’s debut LP, PERMISSION, which is both a drone-punk fantastica and a crushing blow to the patriarchy so make sure you check it out.

SoCal punk-rockers known as Together Pangea have a brand-spanking-new single to follow up their 2017 LP, Bulls and Roosters. Does this mean Together Pangea has a new album lurking on the horizon? I certainly hope so because once you hear it, this is the kind of pop punk that will worm its way into your brainspace and then won’t leave. We need more. “Hi-Fi Television” offers screaming guitars and super catchy vocals that will have you reaching for the repeat button. This is the pre-holiday banger I didn’t know I needed.

Tempe punk rockers (by way of Cedar Falls, IA) known as Canids offered up this meaty pop punk single on their summer ’18 album, The Banshee Shriek. And “meaty” is not a word I generally use to describe pop punk. Fun, feisty, charged with energy – this song is all those things and more. There are some serious instrumental moments and weighty lyrics buried in “Necrotic Green”. And that goes for the rest of The Banshee Shriek too so make sure to dive in attentive. And you should definitely dive in.