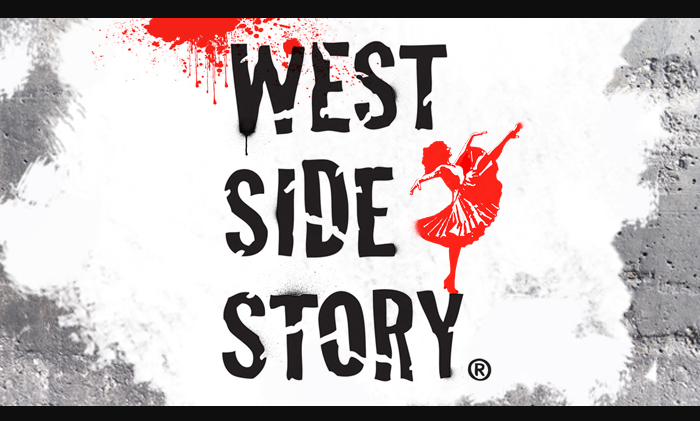 Few shows encapsulate the American theatre like West Side Story.

Based on what many consider to be English literature’s greatest love story, Romeo and Juliet, it was Sondheim’s first Broadway show, launched Chita Rivera’s career, and the 1961 film adaptation still holds the record for the musical film with the most Academy Awards. It is performed all over the world, in theaters large and small, and songs like “I Feel Pretty” and “Tonight” are almost universally known, even by those who have never seen the production.

Perhaps because it is a classic based on a classic, West Side Story is a dynamically flexible show. Many of its themes are universal. Young love. Racism. Tribalism. Michael Barnard’s take on this well-known tale adheres closely to the original work. Set in New York in the 1950s, two gangs of boys are vying for territory, fueled by ignorance and hatred. Sudden and intense forbidden love between the factions sets forth a series of unfortunate and tragic events.

The show opens with the Jets, establishing themselves as a raucous group unfriendly to the Puerto Ricans in their community. Then we meet the conflicted Tony. And from the first note out of James D. Gish’s mouth, it becomes clear that he will anchor the show. His voice is so pure and full, I never wanted him to stop singing. Joy Del Valle is a charming Maria, with an unwavering voice that never flinches at the high notes. Alyssa Chiarello portrays Anita with intense charisma, and Eddie Maldonado is a passionate and charming Bernardo. Everyone in the large ensemble is full of vibrancy and talent.

From beginning to end the choreography is absolutely breathtaking, full of graceful jumps and structured synchronicity. It is high energy, which provides a refreshing counterbalance to the heaviness of the story unfolding. Even the switchblade-laden rumble provides visually pleasing movement. Daniel Davisson’s lighting is very well done, showering the stage in colors that heighten the moods portrayed in each scene. And the live accompaniment is so clear and precise that, for a moment, I thought it was recorded.

Although this show is about racial tensions of years gone by, it remains quite relevant today. The Sharks represent a marginalized segment of our society. A portion that seems to be growing exponentially as political tensions continue to divide us. It is also impossible to ignore the ravages of Hurricane Maria, which resulted in the loss of nearly 3,000 American lives on the island of Puerto Rico. Americans who still, over a year later, live in horrific and unspeakable conditions. And in the aftermath of the hurricane, the somewhat jovial song “America” takes on new and uncomfortable meanings. “Puerto Rico, you ugly island… Always the hurricanes blowing… And the money owing…” Ick. Even Tony’s beautiful ballad “Maria” has taken on new depth, thanks to Lin-Manuel Miranda’s “Almost Like Praying” fundraiser, which includes some of the most prominent Latino voices in pop culture singing a lament in support of Puerto Rico and the Hispanic Federation.

This is not a production for the faint of heart. There are several intense moments, and — spoiler alert — there is no happy ending. You will not leave the show feeling the catharsis that comes with a story where everything works out in the end. But it is a beautiful piece of art. A production that explores the darkness of hatred, and the powerful ways that love transforms and changes us. Phoenix Theatre shows reverence to this quintessential classic, providing a production that will please both the purists and those seeing this show for the very first time.

West Side Story runs at Phoenix Theatre Wednesdays through Sundays until October 14th. Tickets can be purchased on the Phoenix Theatre website. I suggest you arrive early and grab dinner and drinks before the show at ArtBar + Bistro, right in the lobby of the theater complex. You can make reservations on the website after you purchase your tickets. And, it’s still early enough in the season that you might want to explore the season ticket options, as there are several really great shows slated for the 2018/19 season.