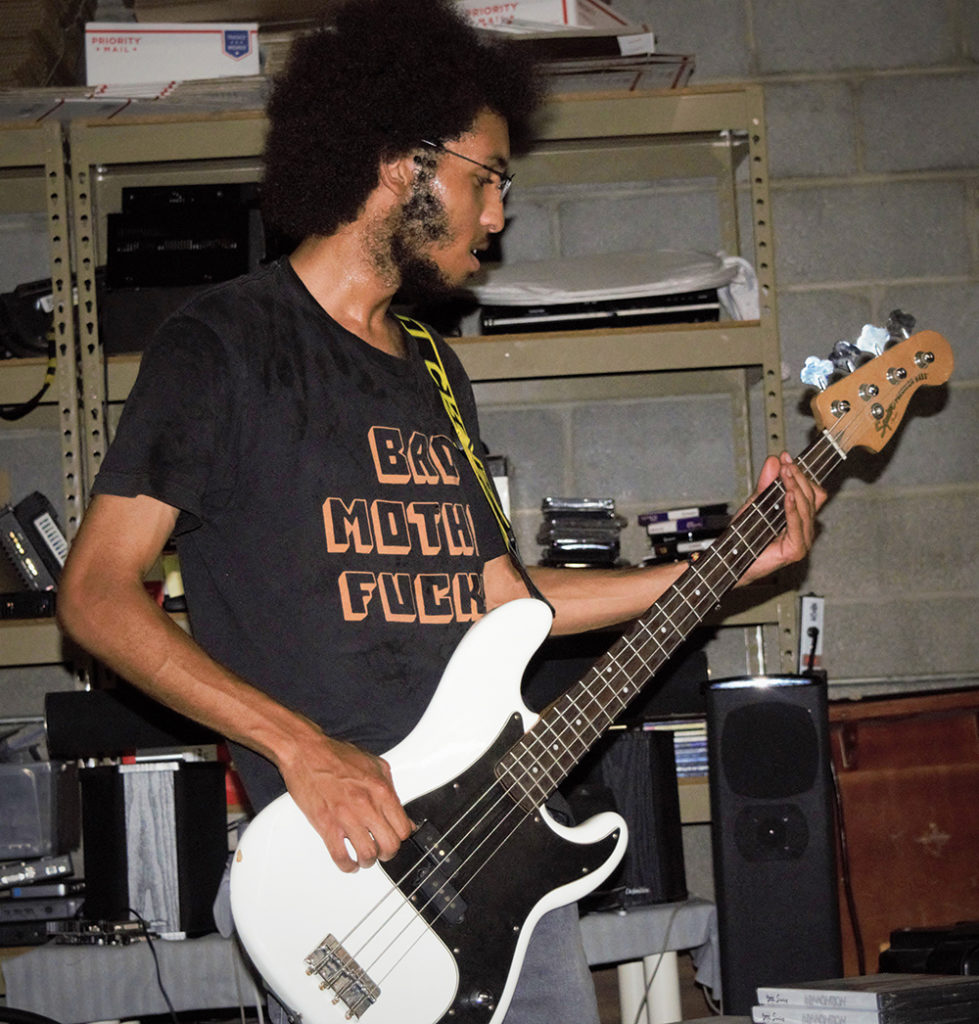 On Saturday, August 25, the last place I expected to find myself was in attendance for a local show at what turned out to be a fascinating experiment of what truly qualifies as a venue.

In the corner of Peoria hides a small business park where a nondescript tech warehouse stands among others with little solidarity. However, unbeknownst to most, Andy Warpigs drummer and NFOE founder Jimmie Lewis planned a night of artistic rock debauchery at what himself and co-founder Dominic Vega like to call, The Negative Zone. With little more needed than the flip of a switch, immediate darkness transforms a warehouse on Vogel Avenue into a cyberpunk maze complete with accented special effects scattered throughout. I may have spent a sizable amount of time catching the musical fare, but the haphazard-yet-charming arrangement of the tech-maze mixed with clever special effects makes this DIY-venue one-of-a-kind.

Since the venue and concept were still in the foundational stages during my attendance, the show — featuring appearances by Half Drag, TrailerPark TrapHouse, and Butoh Sonics (with the absence of Songs Lacking Talent and E Alo) — were nothing short of raw and aesthetically challenging at times to the modest audience. 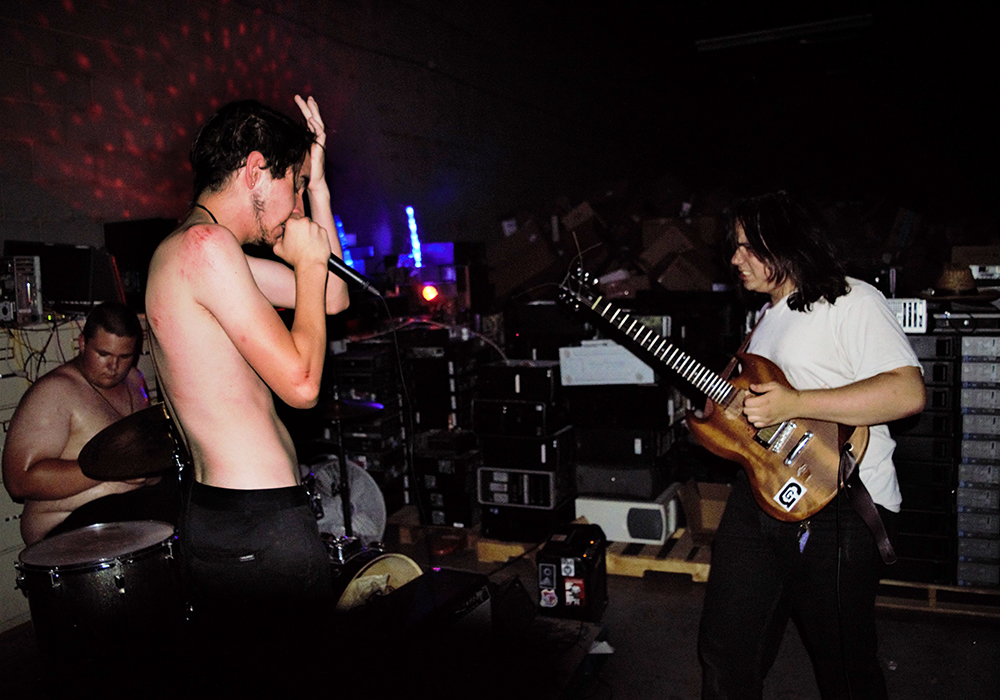 The first performance of the night featured the straight-out-of-the-gate band, Half Drag, which packed in a musical display my persisting tinnitus struggled to make sense of. I would later find out from Harrison on drums that this was the debut performance of Half Drag; the band didn’t even have a band page, let alone fully-fleshed song names from their set. In a rush of what I would call “elements of harsh noise,” Solomon on guitar and Alex on vocals laid everything out on the table in ballsy fashion while Harrison contributed percussion into the mix.

As much time as I could spend harping on the various rules of stage and theatre being broken during the performance, I couldn’t refuse the heart and soul they smothered the venue with. There wasn’t much stage patter to go around, but each track performed constantly bordered the line between insanity and semblance; just when everything seemed to culminate from chaos in their composition, a few riffs from Solomon would tie everything back for the audience. Half Drag maybe has a few acid trips to go before finishing off their sound and image, but their debut displayed all the soul needed to move forward. 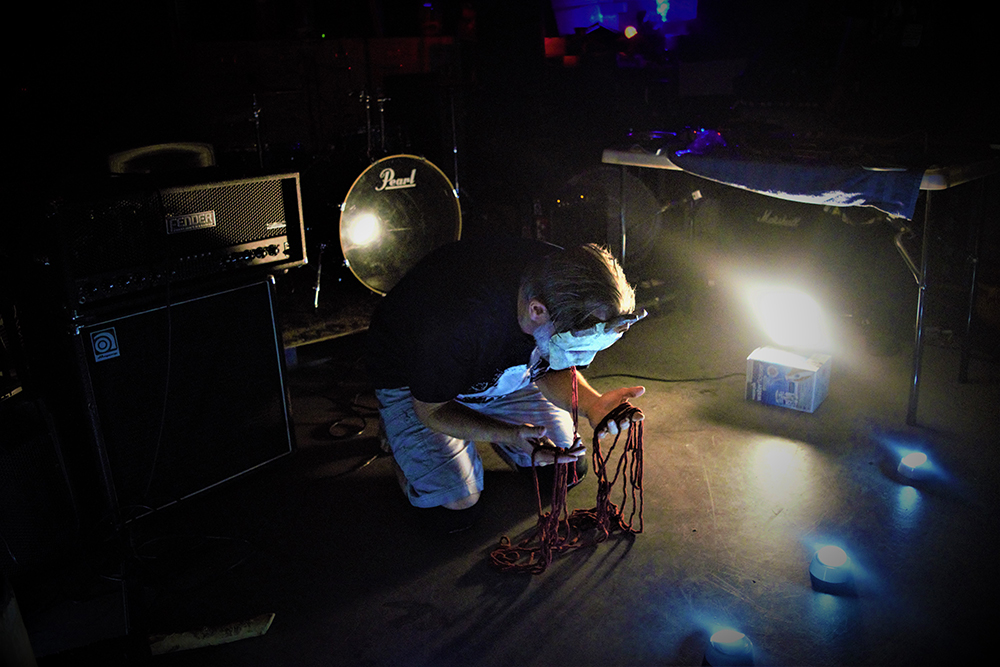 After a small, spontaneous jam-set featuring members of NFOE and TrailerParkTrapHouse, one of the more artistically specific acts took the stage area with a small, circular lighting-design reminiscent of an “in-the-round” venue experience. While a couple members were reportedly missing from the usual quartet of Butoh Sonics, the presentation of this historical art form did not suffer in the slightest. Performed to “resist fixity,” Butoh rose in popularity in the post-World-War-II world and caught on with performance artists who appreciated the attention to restrained movement which conveyed varying degrees of pain, grief, and occasional absurdity. To many modern reviewers, Butoh has been labeled unceremoniously as “unclassifiable,” even though the performance displayed by one-half of the Butoh Sonics matches the founder Hijikata Tatsumi’s view of the style of Butoh as distressed.

To call Butoh Sonics unclassifiable would be wildly inaccurate: behind the concealment, Butoh dancer Eric Hodgins emoted silently through the decorated mask and utilized the brooding red strings in forms of narrative. Unlike traditional Butoh, Butoh Sonics take this concept one step further with Victim of the String Infestation on “prepared guitar”, producing an array of improv instrumentals through various crude and electronic means. Although their presumed third and fourth components were missing, Eric Hodgens managed to transfer this interpretive somber energy into the audience, as we all felt the rigidity and despair between his controlled movements and use of the aforementioned string. While the display curated by Eric and Victim derived from their own influences mixed with the traditional dance, they showed an intense dedication to the culture and authenticity of what Butoh means to them; I may have not understood the art of Butoh before further research, but the emotional brevity present in their performance made up for my lack of knowledge all the same. 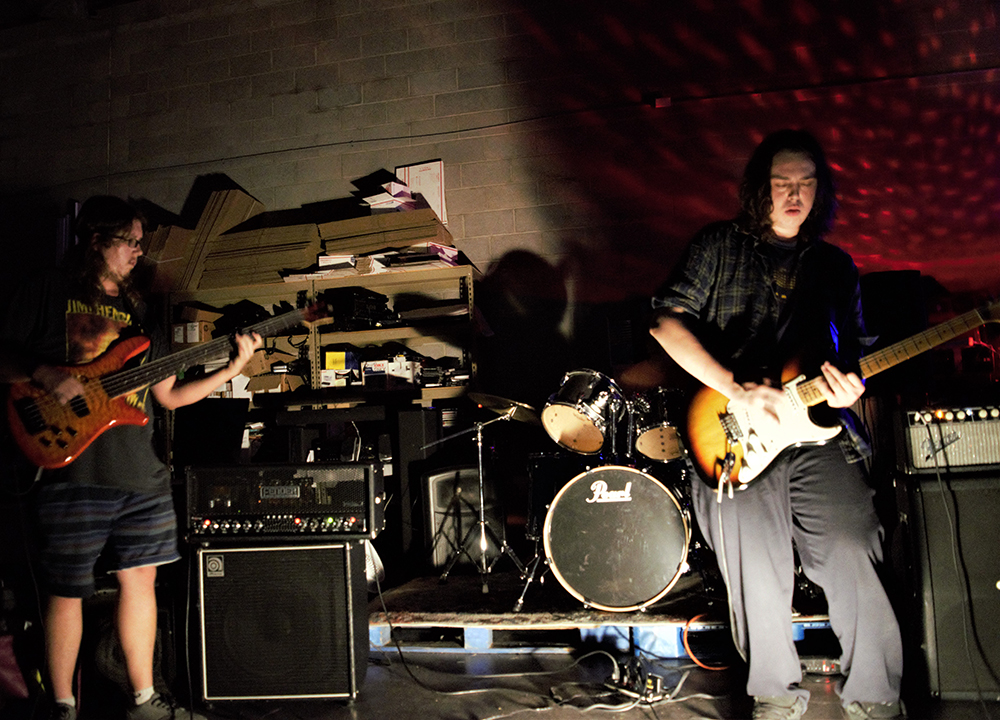 The second-to-last set also featured a band facing creative transitions: the group comprised of Alex on guitar, Lawrence on bass and Andrew on drums once went by the name Speding Out, but soon found small controversy with the nature of their name leading to them changing it. The newly-named TrailerParkTrapHouse took to their space with jovial attitudes; even when technical problems like a popped-string would halt the set, the band members tried their best to keep the jokes going (I’m sure more of them would have landed if they utilized a mic for vocals with the warehouse acoustics). Like Half Drag, TPTH took a slew of genres and entered the dark portal into the “experimental rock” category; Alex would add small riffs akin to oldies jam bands, while his brother Andrew on drums reminded me of a young Meg White, adding tribal percussive elements to the smooth bass of Lawrence.

Not quite psychedelic, but somewhere between the genre of contemporary rock and grunge lies the ethos of TrailerParkTrapHouse: fresh, still finding their groove, but still unrepentant. The naturally rebellious nature of each member guided the vibes through this obvious transition of image and sound, but the attentive audience proved to be patient even through the aforementioned string-breaking debacle. TPTH also left me slightly unsure with the nature of their set and future plans; how much would their new material differ from their brief time as Speding Out? Like Half Drag and the nature of FreakOut!, TrailerParkTrapHouse used their time to get some feet wet to their sound and introduce newcomers like me to the most recent of up-and-coming acts; in this judgement-free zone, who am I to be the big-booty Judge Judy? 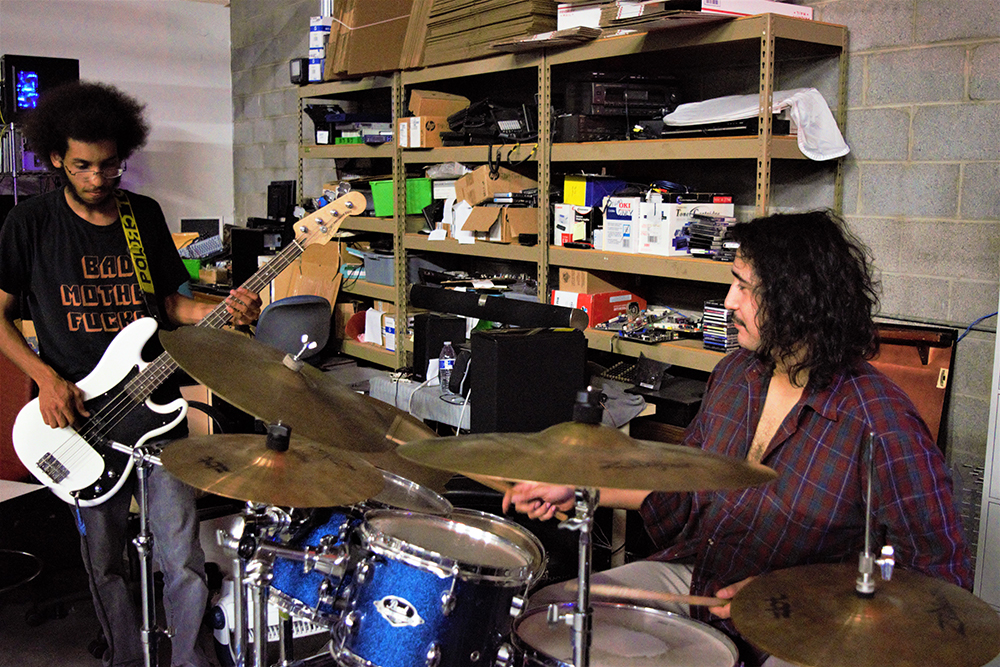 Jimmie and Moses of NFOE and Songs Lacking Talent

After a brief intermission, the night concluded with a relaxed, informal set featuring Jimmie from NFOE and Moses from Songs Lacking Talent interchanging between drums and bass. The chilled-out improv nature revealed itself to be the final theme and trademark of the night: there can always be a venue for your music if you create one. As I left the warehouse after kicking back with some remaining crowd members, I remembered a quote from 1989’s A Field Of Dreams:

“Ray, people will come Ray. They’ll come to Iowa for reasons they can’t even fathom. They’ll turn up your driveway not knowing for sure why they’re doing it. They’ll arrive at your door as innocent as children, longing for the past.”

The Negative Zone and some of the night’s acts may have ways to go in terms of achieving their creative goals, but this strong start will no-doubt make an impact on local concertgoers looking for a rad, West Valley venue. 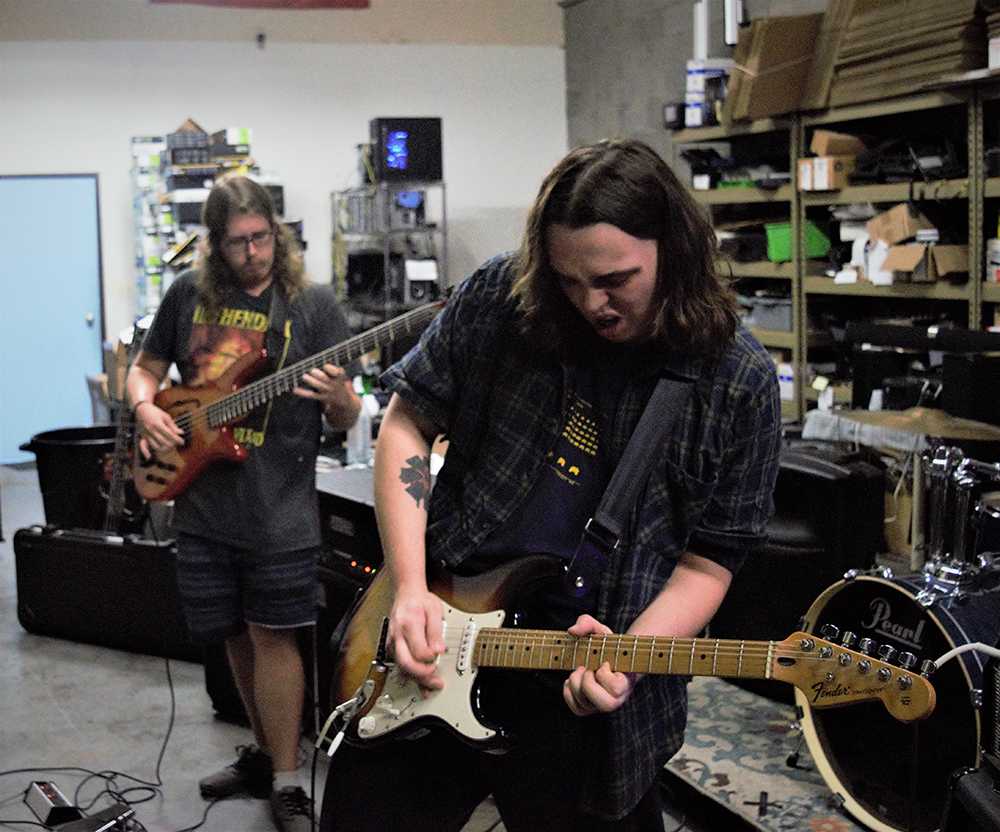 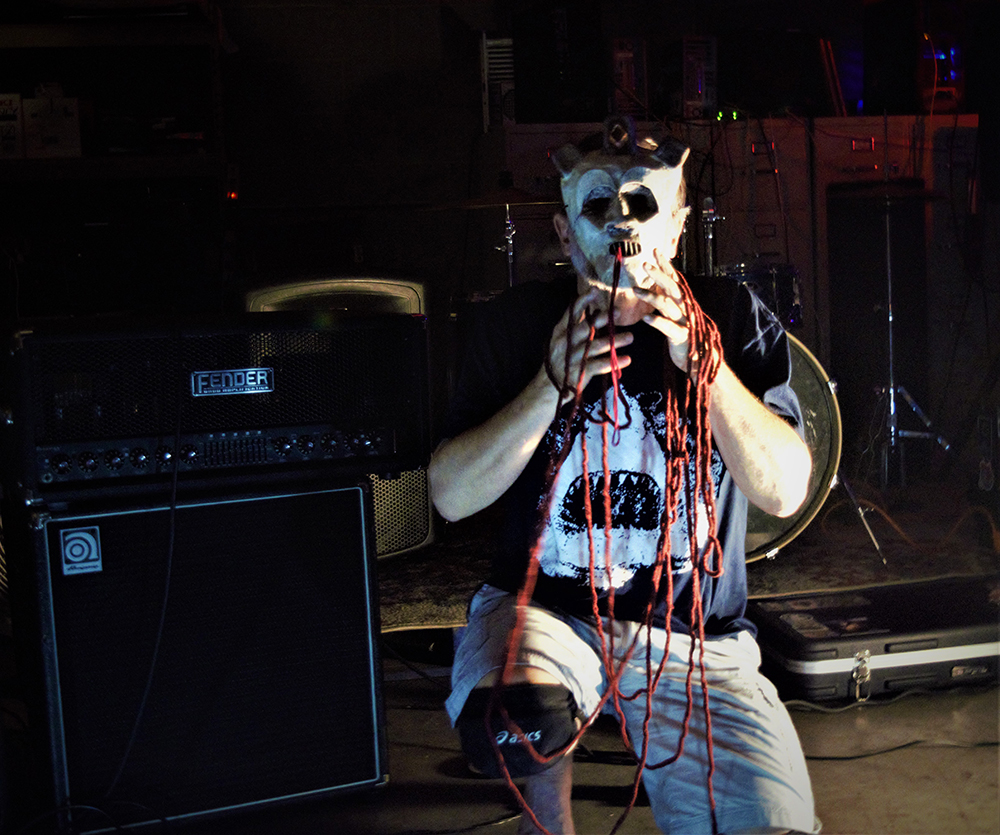 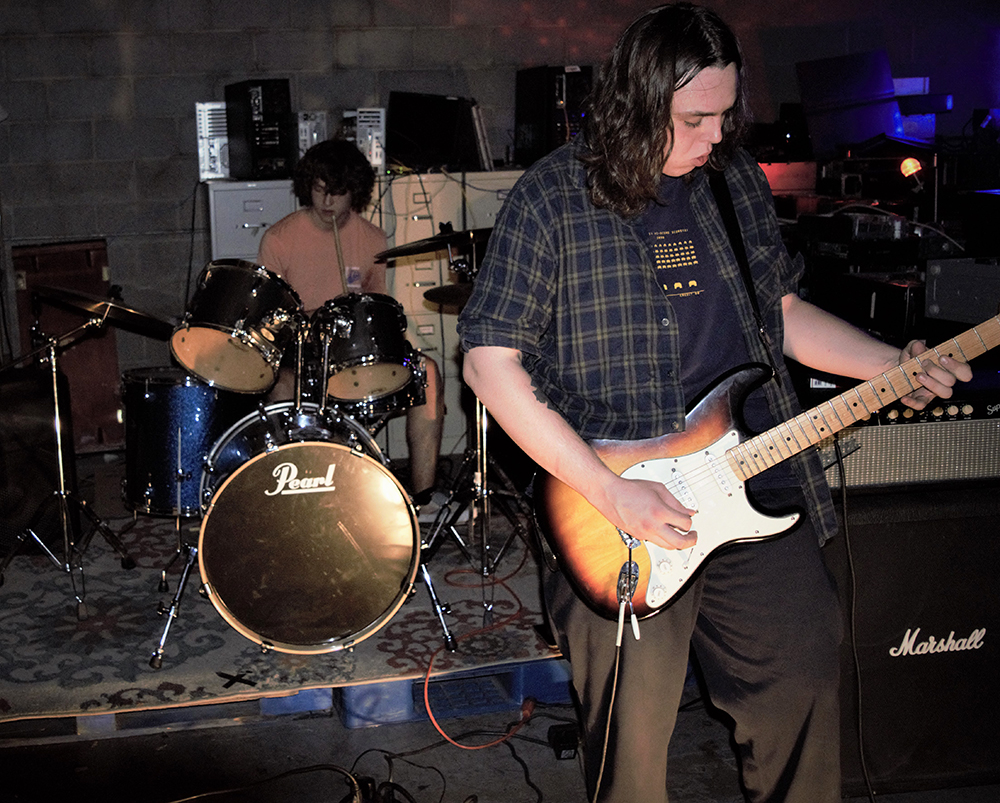 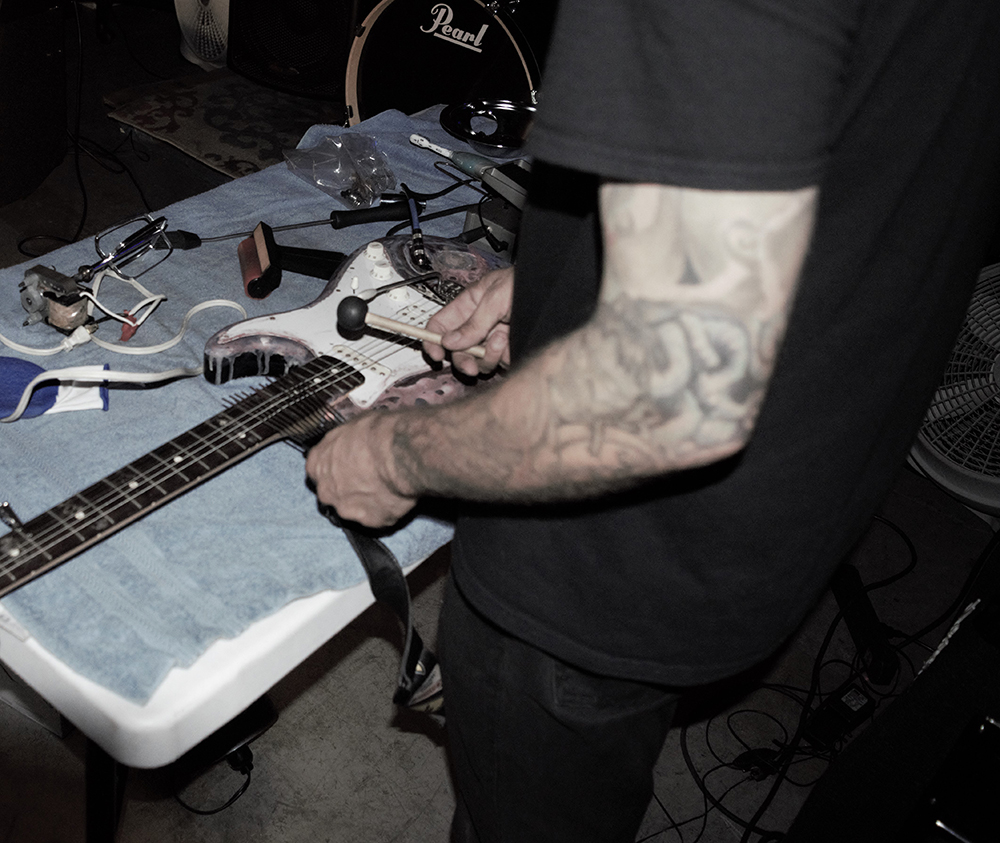 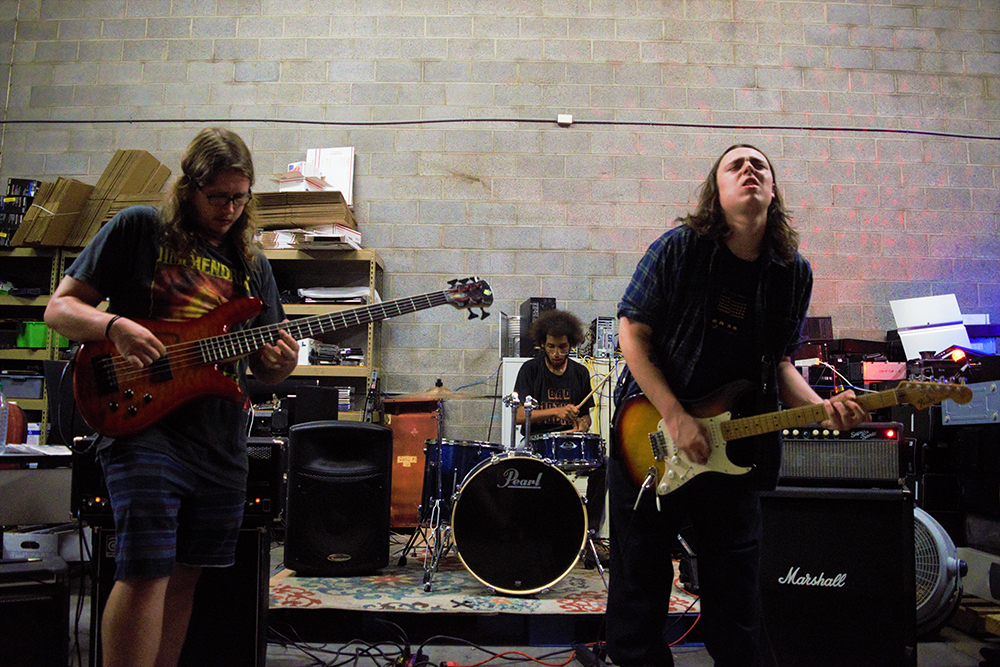 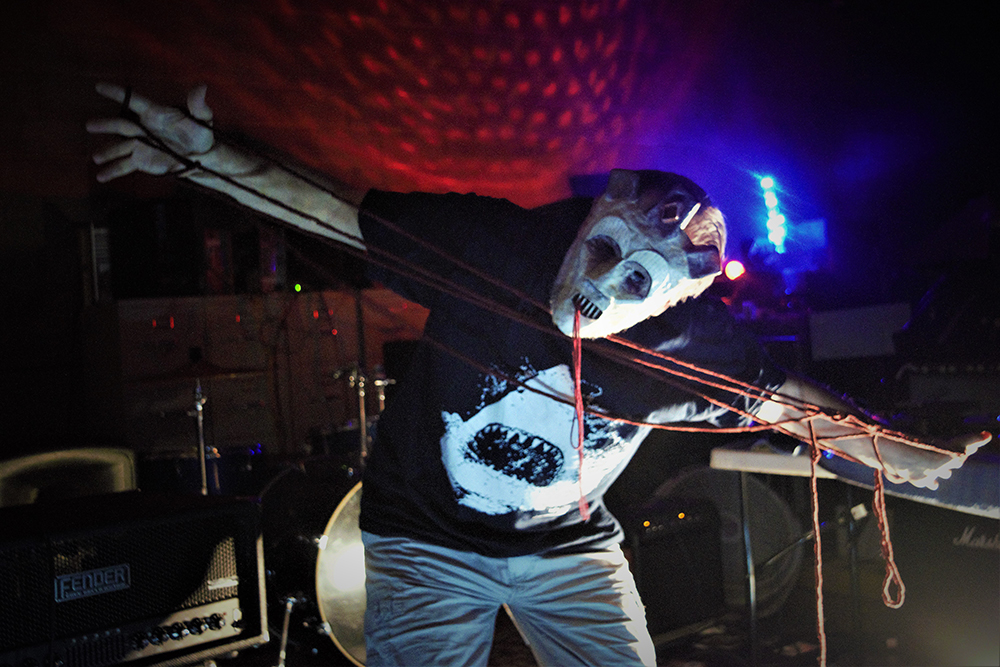 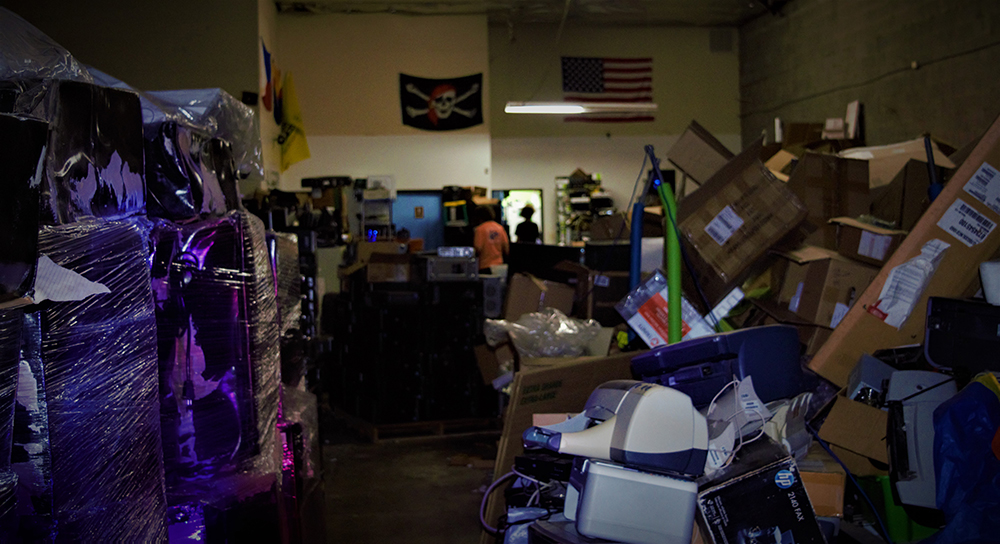