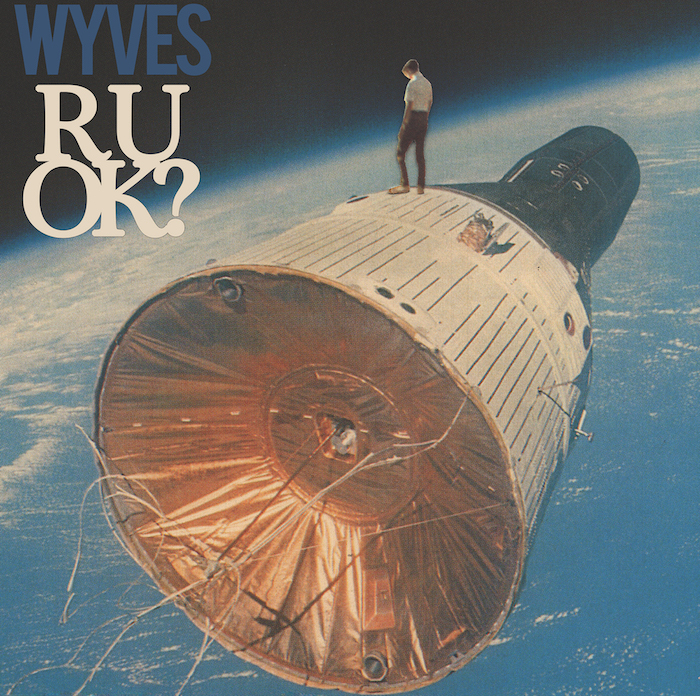 It’s been two years since Wyves offered up Spoils of War to the thirsty fanbase built over years of playing Valley bars and music venues. And, now that their fans are once again found wanting, Wyves is ready to unleash their sophomore effort, R U OK?, later this week.

The new LP has that same rocknroll swagger that has made Wyves a Phoenix mainstay at live shows over the years, but doesn’t shy away from the issues of the day. Instead, Wyves holds to that shake-up-the-bar resurgent rocknroll we know and love but the lyrics go further into the trending concerns of everyday folx.

That’s not to say that the Wyves’ party power has in anyway diminished. They’re just applying that prowess to helping you dance away your political frustrations. No diminished swagger needed.

I had the chance to ask the fellas of Wyves some questions about the making of R U OK?, the release show this weekend at the Van Buren, and what’s next for the band!

YabYum: Let’s get some of the basics out of the way. Where did you record the new album? Same players in the band as on your debut?

Wyves: We recorded with Bob Hoag at Flying Blanket Studios in Mesa, Az. The same 4 core players recorded on this album. The only non-member playing on the record is Bob on percussion throughout all the recordings.

I’m going to throw a couple questions at you at once… First, what’s the story with the title? On first glance, it’s easy to dismiss the title as some fun appeal to Millennials, but when I really started to think about it, the question seems like the most zeitgeist statement ever. Wyves has often been described as a “guilty pleasure” band, but it seems like this new album applies the band’s rocknroll swagger to some serious present-day issues. Was there a shift in focus for you as a songwriter post-election?

Corey: The title “R U OK?” and a large portion of the lyrics throughout the album have a cryptic quality, often 2-3 meanings to every line are meant to evoke a personal reaction and experience to each listener, like a Rorschach painting. It started with my hang up since I was little of being asked “Are you okay?” by people sometimes who don’t have your best interest in mind, trying to shine a negative light on something that may otherwise not be there.

An alternate title could be “Don’t dim my shine motherfucker!” The point of the whole record lyrically is, if your answer is, “NO..I’m not okay”, there is nothing wrong with that. While exploring this thought and dealing with my own fun stuff, I was seeing other people battling depression, overwork, stress about money, death and illness of loved ones, illness, disconnect in politics brought on by increasing social awareness and the attempt to quiet or redirect the narrative. The cause and effect of everything surrounding us as men, our loved ones, our city, state, the American Circus and the world we live in.

If there was any concept to the album, it was to carve out a little time capsule of RIGHT NOW, and to tell it with a sense of honest urgency and immediacy. Like a medieval minstrel or scribe. I played with narrative and different perspectives (examples: “Mar-a-Lago” is a first person dark comedy satire through the eyes of Donald Trump, “Distractions” calls out the Orwellian nightmare that has gone on long enough, “The Speed of Sound” is first person as Chuck Yeager the day he reached Mach 1 and broke the sound barrier, “My Gravity” uses Einstein’s definition of Gravity in the chorus to explain love/religion/purpose. “Princess Excess” sounds like a party girl rock song but is actually written as Lady Liberty and an homage of the working class, the quickening of industry and technology, and the unrealistic inflation/cost of living, “Leroy” is a tribute to my grandpa who I share the same middle name and who passed away a few days before we released our first album.

We wanted the words to be thought provoking and current while still maintaining the swagger and energy we are known for in the music. Contrast is key in art and good songwriting. It’s easy to get comfortable in your approach and to rely on the same topics/musical influences/progressions/rhythms, etc. This is our attempt to break it up and build something stronger and relevant to the times we live in.

And while we’re on the topic of songwriter, can you tell me about the band’s songwriting process? How does Wyves approach the task as a unit to bring the songs to life?

Evan: Corey and Nick will bring riffs and melodies into the practice room where we all craft and mold structures, polish them and finish them off.

Which brings us to the music video for “Mar-a-Lago”… can you tell us how this creative venture with Robbie Pfeffer came into being?

Corey: I had seen Robbie’s animated short pieces for the Phoenix New Times, and the thought his use of color, motion tapestry backgrounds, and raw/playful style would add a surreal element needed to make these crazy ideas come alive for the reality TV, cartoonish nature of our commander-in-chief. Robbie is not only a great songwriter and explosive performer in Playboy Manbaby, but he is also a talented and unique artist.

I saw Trump as the wizard of Oz, who no matter his manipulation and all knowing persona, he is still the fool evangelist on the side of the road with a broken wheel trying to sell cure-all elixirs trying to figure life out like the rest of us. Nick and I are always hung up on the fact that he eats his steak well done with ketchup. Evan saw the world spinning as a smiling golf ball. Robbie ran with it, put the intro in black and white, went to color when the first verse cranks in, had money and diamonds falling from the sky, and he even flew the dude to space to escape Armageddon with his favorite dictator.

Wyves has a reputation for delivering stellar live performances and you fellas play out pretty regularly. Any suggestions for maintaining that onstage chemistry over the years?

Evan: You gotta love the people you play with. We are all friends first and foremost. We accept each other for our strengths and faults and have learned to work well as a unit. Letting loose and pulling off a Rock n Roll swagger on stage we just never really needed to work on. When we play the tunes in front of a willing crowd it’s just the zone we get in. We know if we are having fun up there, the crowd will be having fun with us.

The release show is coming up this week. Do you get super excited or super nervous leading up to a release show? Or is there just a gradual sense of relief that comes from accomplishing a monumental task (like recording/releasing an album)?

Evan: We feel the pressure of a good turnout and we definitely get bogged down with all of the preparation that comes with an independent release. Once the night of the comes we are all smiles. Performing is the easy and fun part.

What’s next for Wyves? Long, much deserved break? Or right back to performing and writing new songs?

Corey: No breaks! Not yet anyways. We will begin writing our next album in October and we will be touring the Midwest, Northeast, and Southwest United States in November.

Make sure you head to The Van Buren on Friday for the album release show with decker., Banana Gun, Bear Ghost, and Harper and the Moths!  And make sure you follow Wyves to keep up with everything they have planned. 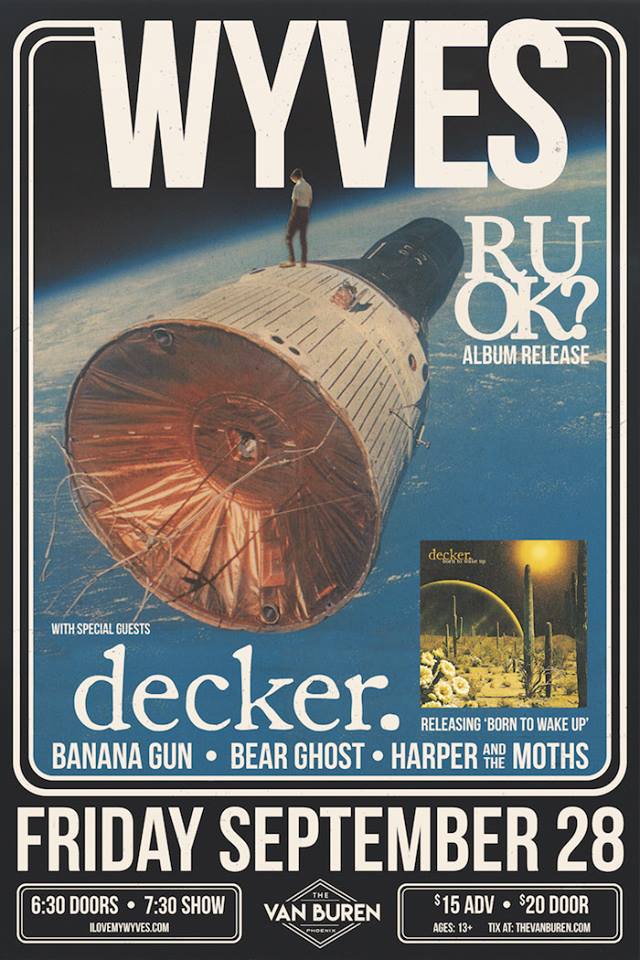