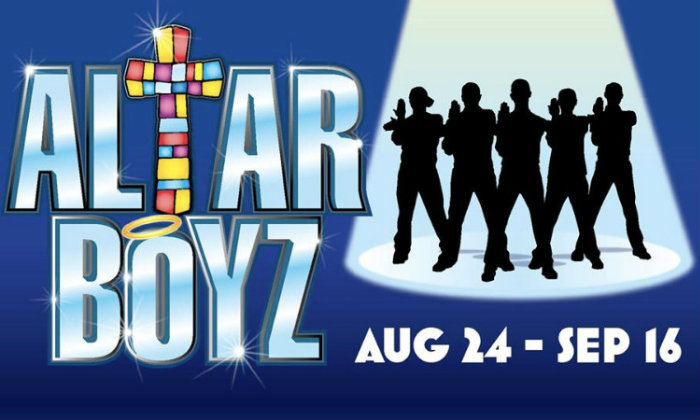 Upon walking into the mainstage space at Arizona Broadway Theatre (ABT) for Altar Boyz, there is a sense of poppy nostalgia. As a young girl, I fell in love with a boy for the first time watching New Kids On The Block music videos on VHS. I came of age witnessing friends arguing over the epic NSYNC versus Backstreet Boys debate. So I was taken back to my youth walking into a beautiful venue with those songs providing the background music. During meal service, the hits kept on coming. While enjoying the delicious food that ABT can always be counted on to deliver, I grooved along with such classics as “MMMBop”, “The End Of The Road”, and “Wannabe”. Songs that took me back to my youth, but that evaded my adulthood because…well…honestly…they aren’t that great in hindsight. But man, did I love them back in the day.

The show is quite unique. The audience is meant to feel like they are at a 90s Christian boy band concert. There is no fourth wall. The band members speak directly to you. They look into your eyes as they sing to you. There are no asides or back room private discussions. Everything seen is meant to be seen. It is an exciting format, and the execution is very well done.

The small cast, of just 5 band members, absolutely delivers the energy required to sustain a show somewhat lacking in story. They sing and dance through every tune. The moves are, for the most part, fairly muted and completely reminiscent of the synchronized choreography of the genre they are representing. Impressive when one considers that they are incessantly singing and belting while moving and grooving. The musicians play live at the back of the stage, and they all looked like they were having the time of their lives, which further amped up the fun factor.

I attended a production that had a bit of cast-shuffling based on the Playbill, but I wouldn’t have guessed as much based on the outcomes. Sam Primack as Abraham was absolutely adorable, with a voice from the heavens. Tyler Greggory as Luke is quite comical, and throws down some pretty impressive raps quite flawlessly. Kirk Sobject as Juan is charming, and brings out a somewhat unexpected showstopper at the end of “La Vida Eternal” in Act 2. Joe Ogren portrays Mark effortlessly. As perhaps the most conflicted character in the show, Ogren finds the joy in the tough moments and utter happiness in the rest. And Joseph DePietro was spectacular as the band’s leader Mathew. He has charisma for days, and dance moves that are perfect for his character but would never be allowed at church.

With as great as the performances are, and with as beautiful as some portions of the otherwise raucous songs are, this is not a show for everyone. It is overtly campy and built at an intersection of boy bands singing Christian music. It expects the audience to understand the world of 90s pop culture, Catholic traditions, bible stories, and silly slang. It is not written in a customary format, and it is not pretending to be anything that it isn’t. And it isn’t your standard musical. But for those in attendance who can appreciate the energy showcased on stage, and the playful humor that pokes fun at an era, it satiates that sweet spot for a light-hearted night at the theatre.

Altar Boyz is currently running at Arizona Broadway Theatre on Tuesdays through Sundays until September 16, 2018. Tickets can be purchased from the ABT website or by calling the box office at 623.776.8400, ext. 0. As always, I highly suggest you start with a meal. The food is consistently spectacular and the wait staff are incredible, always adding to the delight of the overall experience.

ABT is offering discounts for shows if you see others this season, so while on the line you can score tickets to the upcoming Titanic and Miracle on 34th Street. And if you want to support ABT at a higher level, ask the box office about the ABT Stage Pass, a very cool new concept that allows you to subscribe for a monthly fee for tickets to shows and tons of perks.

For tickets to Altar Boyz, head to the Arizona Broadway Theatre website here.