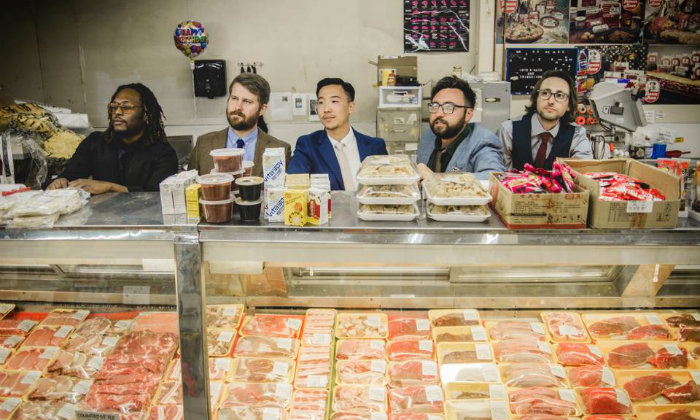 Asian Fred is one of those bands that we wait for… patiently. As soon as they put out a single, we jump to devour it with our ears and then are left waiting once again. But, this time, fans get an entire six-song EP! That’s right, folx, Super No. 1 contains six finely crafted indie pop songs for your listening pleasure. The EP kicks off with “Conversations”, a slow-blossoming introduction to the Asian Fred sound, before fully taking flight on”W.P.” which has been on repeat since the band put it out as a single in prelude to the EP’s release. Asian Fred creates indie pop for the thinking person: each note feels meticulously place and each word worth weighing in its context for meaning on repeat listens. “American Pop Culture” takes a pensive turn toward a more inclusive culture while “Uppers” demonstrates that the band is not afraid to broach new aural terrain and push toward experimental sounds and they can do so without losing the thread of continuity that runs throughout the EP…. even when shit gets weird. “When I Speak” offers the perfect closer: patient yet powerful.  Super No. 1 just came out on September 14th so score that super fresh Asian Fred sound before all your friends do.

This past summer Gene Tripp released the most perfect Autumn album. His s/t, 5-track EP sets a calm for cooler weather… and you might need a sweater as the chill of the music sets into your bones. The album digs deep from the get-go with “Tree of Life” and its haunting sense of loss. “You can never go home again, since lightning struck…” And that’s just the first song! Gene Tripp does not disappoint on Gene Tripp. The musical tone lightens (a little) for “Sun City Dreaming” but there is a desolation that remains throughout the collection. That might has something to do with the ambient waves of desert psych that the EP floats upon (nod to vocalist Lonna Kelley, who adds her voice to the soundscape, here). A number of additional artists contributed to this orchestral effort under the direction of vocalist and songwriter (et. al), Jay Hufman. This is an EP that you listen to from start to finish without interruption. I don’t even have a favorite song, just moments that rise above others and stay with me. The heaviness of vocals when they first start on “Tree of Life” or when the strings kick in on “Where does the Time Go?” More than a collection of mere songs, Gene Tripp’s s/t EP is a collection of sad and breathtaking moments.

The Edisons captured our attention with their 2016 release, Space Whales, and now the PHX 4-piece is back with their third album, Carriers. The five-song EP dropped earlier this month at Last Exit Live for fans and friends alike. The opening number, “Searching For a Lover in Hell”, sets a tone as brooding as the title implies with layered vocal angst and dark synth rock. The instrumentation lightens up for track two, “Escaping By the Moment”, but the temperamental lyrical delivery maintains the tonality previously established. The title track follows before “Coal-Hearted Romantic” (my personal favorite) brings the heartache while the music is a little more stripped down and a bit slower to really draw out the anguish. “Riding This Out” closes the EP is true Edisons’ style: emotional indie rock with just the right touch of dismal. Sink into the synthy sounds of The Edisons on Carriers. And, just in case you missed it, The Edisons contributed a cover of Glen Campbell’s “Rhinestone Cowboy” to the When In AZ Vol. 2 compilation that you should definitely hear as well.