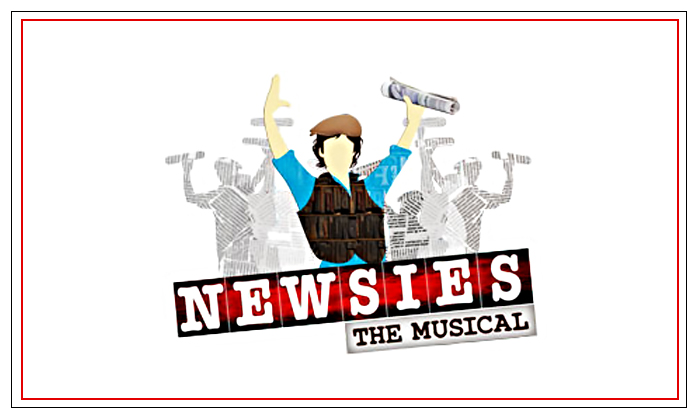 Newsies is a musical inspired by the Newsboys Strike of 1899, when impoverished children who sold newspapers on the streets of New York rebelled against the publishers who charged them more than the standard rate, most notably Joseph Pulitzer and William Randolph Hearst. The story was originally presented as a Disney film released in 1992. It was then adapted into a stage production which ran on Broadway from 2012 until 2014, recieving 8 Tony nominations, and winning for both Best Choreography and Original Score.

More recently, the production was filmed and aired in movie theatres and even made available to stream on Netflix. The filming and airing of the production makes it a very well known show; one that masses of theatre lovers have experienced even if never having seen it live. The biggest players in the original Broadway production — Jeremy Jordan, Kara Lindsay, and Andrew Keenan-Bolger — all starred in the filmed version. So any regional production has tremendously large shows to fill. And boy does Valley Youth Theatre’s production fill them, and then some!

Newsies at the Herberger is by far the best youth production I have ever experienced, and securely ranks high on the list of the best local productions I’ve ever seen. It is somewhat customary to give a bit of a pass to youth shows. After all, they are youngsters honing their craft and still learning the fundamentals. Not so for this show. By 30 seconds into the opening song it became wholly evident that this one did not need to be graded on a curve. It holds its own amongst some of the most professionally-produced performances out there.

The sets are primarily comprised of 2-story rolling metal scaffolding, used to represent the layers of the city. Tables and chairs not only serve a utilitarian function, but they provide additional layers and serve as accompaniments to the choreography. The glitz of this show is the movement and sound, so flashy pieces are not necessary and would only distract. The lighting is crisp and understated. Silent but powerful.

Center Stage at Herberger is a stunning venue. A miniaturized Broadway house that feels much larger than it is. The acoustics are fabulous. It is so refreshing to experience a local show with a full orchestra in the pit, providing the robust sound that cannot be replicated by even the best of sound systems playing recorded music.

With all the grandeur that this location provides, the cast is what makes Newsies so magical. Every single person on stage is giving 100%, every single second. This show demands perfectly synchronized, difficult choreography, as well as sustained levels of dynamism that most productions only attempt for a song or two. And the Newsies deliver tenfold.

The entire ensemble deserves tremendous accolades, so it seems unnecessary to call out any performances as stand outs. However, I would be remiss if I failed to mention that Kale Burr as Jack Kelly and Kendra Richards as Katherine are jaw-droppingly phenomenal. Those big shoes I referred to earlier, of some of the biggest Broadway stars of today, these teenagers never even flinched at them. Riley Thornton, Devon Policci, Nathaniel McNamara, Jack Walton, and Mia Johnson are also more than worthy of seeing their names in the papes.

As if the show wasn’t already enough, this was possibly the best audience I’ve ever been lucky enough to a part of. At this day in age, I am sad to say, a “good” audience may just be one that arrives on time, stays quiet and seated during the performance, and keeps cell phones tucked away and silent. This group not only managed those courtesies, they also understood that energy is contagious. The performers established tremendous vivacity from the start, and the audience continued to give it back in return. The outcome was a show that never waned in exuberance. My face is sore from the smiling, and my hands are still red from the clapping. Battle scars I wear as a proud reminder of an exceptionally joyful night at the theatre.

Newsies is a show about how young people can, and do, change the world. At a time when the American youth is banding together in acts of political activism, it is poignantly topical and inspiring. It reminds us of what can be accomplished when people band together to reach a common goal. It will make your spirits soar, and leave you on a giddy high that you will feel for days. I am confident in telling you that there is no money better spent in the Valley if you want to experience professional quality live theater. Valley Youth Theatre could charge 3 or 4 times as much and the tickets would be more than worth it!

Newsies is the first show in Valley Youth Theatre’s 30th season. It opened on Friday, August 10 and runs until August 26. Tickets start at only $20.50 and can be purchased by calling (602) 253 – 8188 or you can order them online at on the Herberger Theatre website.