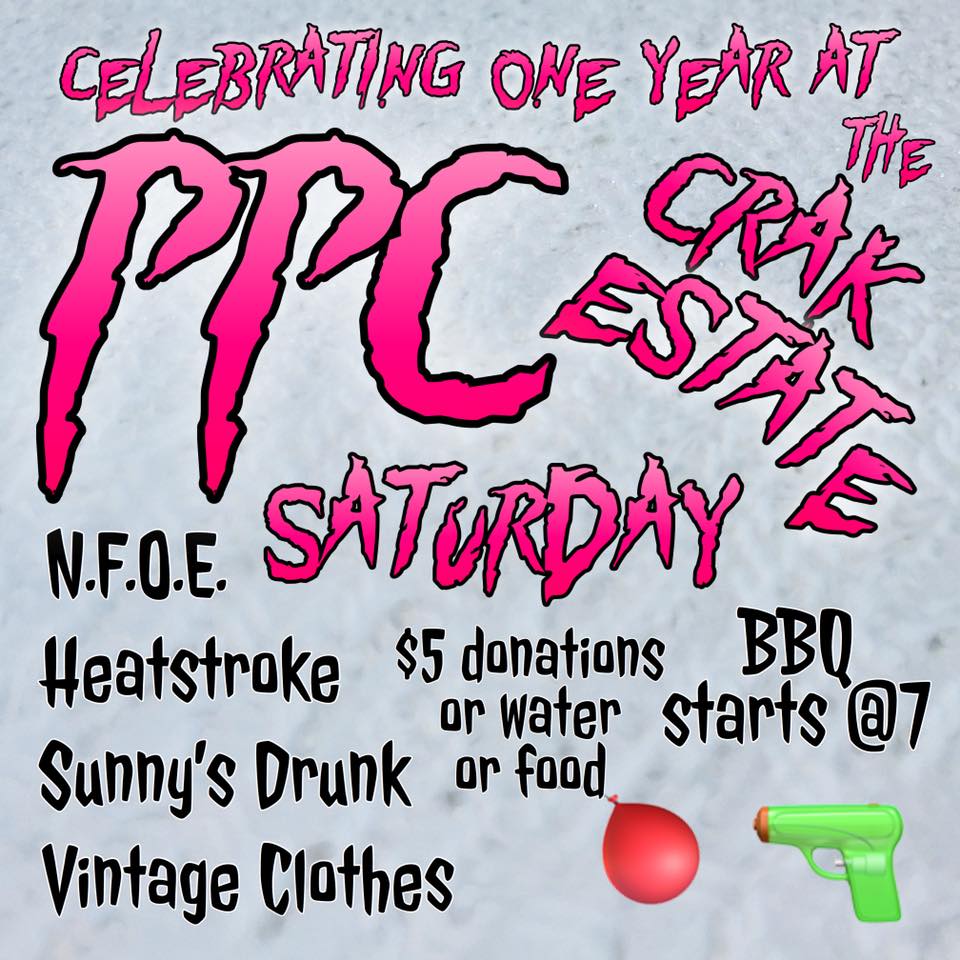 On July 28th, the Pages Per Content gang and friends celebrated the 1st anniversary of their hardy-yet-admirable local venue which has already seen a remarkable number of performers slide through their doors. As the sun began to set on the back of my sun-damaged 2004 Honda Accord, I meandered my way into my first PPC-based venue experience at the property colloquially known as, “The Crak Estate.”

“Man,” I mentally mused, “I need to seriously wear something other than a pineapple button-up.” Did I honestly and tactfully muse about my overworn button-up which survived two false-trigger weight losses and a few ill-advised boyfriends? Of course not! This is a party, and I’ll cry if I want to, damn it. I was a newcomer to this collective, and although I reeked of fresh blood (possibly from the hamburger patties), I would be damned if my selfish mini-cycle of social mediocrity were going to ruin this night. Thankfully, the personally intrusive thoughts of doing my job in an unfamiliar environment turned out to be nonexistent once I met with those present in the first phase of the night and I became familiar with who I believe to be the next yo-yo champion of the Phoenix valley and mingle with a few familiar guests.

I meandered my way inside the daintily pleasant cottage of a venue to witness the slate of four performers who declared Saturday would be the evening they would bare the smoke, heat, and closed-space festivities. The ambient sound I could only source from the main room of the venue collided with the boom of percussion that paired surprisingly well with the small size of the space.

NFOE, scheduled to open the musical portion of the night, describe themselves on their Facebook page moreso as “art” than related to a specific genre. Fronted by Jimmie Lewis (also the lead guitarist for local mainstay Andy Warpigs), NFOE utilized the drum-set front-and-center while another member preoccupied himself with the visual portion on a standard monitor. My blunted mindset quickly adjusted to the vibes being served during the symphonic banger, “Convection”, like the simultaneously alternative-yet-mainstream Moby, the NFOE name operates on material simplicity, but offers much more pomp through the composition and performance offered by Jimmie on the drums.

Pineapple icons stuck to my back as I tried my hardest to get shots in the modestly-lit performance space, but to no avail; I felt the dastardly breath of my editors as it crept down my spine, with pointed questions which would probably never be asked outside of my mental space. Sweat began to drip on my Nikon as NFOE segued into “The Catalyst” after a substantial drum solo: I had to get out of this room or smoke a blunt, and you can probably guess I chose the latter. When I returned in time to catch the ending of “Fusion,” Jimmie launched into a poignant instrumental rendition of Tool’s “Jambi” to close out an unexpectedly chill first set at the Crak Estate.

I first met Jesse of the project “Sunny’s Drunk” whilst drinking myself “off the clock” at the “Friendliest Show Part 2” somewhere in Phoenix. Strictly in attendance for the festivities, I blended in with the crowd and didn’t do much to stir up some action aside from congratulating them on their set. Unfortunately, my consumption at the time limited my memories of said-set, which made tonight’s Sunny’s Drunk set at the Crak Estate even more pertinent to attend. What I thought was a blonde 20-something-year-old mild blur of vision turned out to be a fascinating dip into the singer/songwriter concept under sober circumstances. Was I actually sober for this upcoming set? I was sober enough to write this review, so leave your stupid comments in your pocket.

“Long Walks for Flightless Birds” introduces the Sunny’s Drunk act with a cool charisma carried by a cautious tenor. As the set continued into “Pennenpiage” and “Porcelain,” it was made clear the focus of the set would be the impact of the lyrics and much less the structure of individual tracks. While the lyrics tackled abstract and artistic takes on love, most tracks employed chill indie-pop sensibilities popularized in the early 2010s which are always a welcome sound in intimate venues.

In a world built around the concept of outward aesthetic, my attempt to pin who Sunny’s Drunk actually was left me with more questions unanswered: was their employment of a quiet vocal by choice or a matter of range? What life events lead to these inner musings? Did video effectively kill the radio star? These questions didn’t matter: the energy behind Jesse and Sunny’s Drunk exudes those emotions of uncertain youth we all felt when we yearned to fit in. The loss they sing of is cognizant to those small moments when we felt a rush of unbridled joy for no good reason. As a project formed in their early 20s, Jesse resurrects the singer/songwriter concept with an intense vulnerability that caused more questions to be asked than answers received.

A somber silence washed over me as Sunny’s Drunk ended their set with “Smoke Sticks to Wet Surfaces.” Even at 23, I still felt how the lyrics and genre reminded me of all the clever boys who played songs for me on their guitar and spoke of unimaginable pain before they disappeared in a blink. I looked at Jesse and pondered how many hearts they had to break before arriving to this point in time. 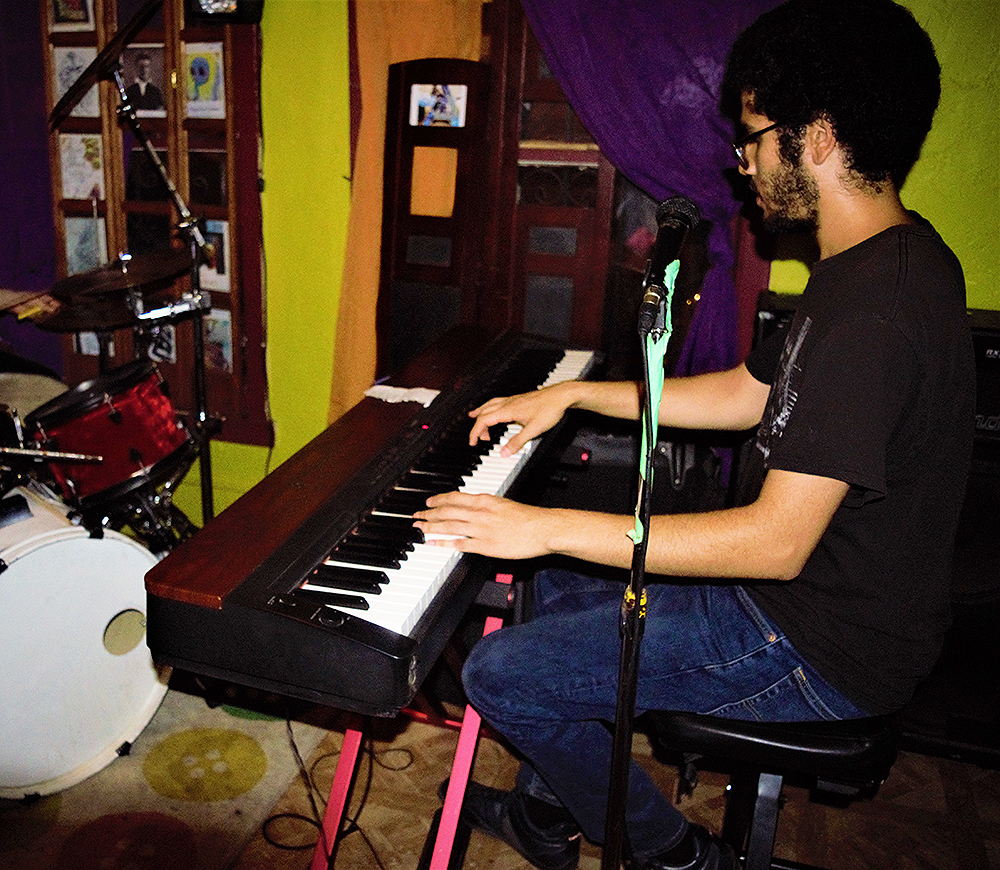 If any act had to be nominated for “Logan’s Big Surprise of the Night,” Vintage Clothes, manned by Matt Oliverio on drums and Michael Oden on piano / vocals, laid out a set I would never expected to have heard in Phoenix, let alone in 2018. Since the 1990s, the piano / keyboard had largely shifted to the back of arrangements in modern composition, minus the moments when hip hop producers or Scott Storch snuck a catchy riff to support the chorus.

In the case of the traditional piano sound, I believe it was in 2014 with the latest Elton John album in which I truly recognized the piano carry the main melody. They may have evoked the likes of other indie acts with inanimate-themed name, but the truth more resembled the songwriting-likes of Burt Bacharach, Holland-Dozier-Holland, and Dallas Austin than Mumford and Sons. Each track from “See Her Fantasies” to “Mystery Train” treated audience members to well-phrased, savory riffs which possessed enough grit to match the sugary-sweetness of the simplicity born out of complicated composition. There may be beauty in complication, but those feelings are only exemplified when morphed into pieces light on the heart and ears.

The six-song set flew by as the blunts I smoked earlier came to me in waves; the gentle-yet-inspired tunes flowed seamlessly while Michael displayed small bits of improv in-between songs and Matt who carried the shows percussion ten-fold, built the rhythm around Michael’s intense melodies. Like the songwriters of yore, Vintage Clothes managed to capture the sort of magic few producers ever see in this lifetime: a combination of simple riffs arranged in ways only experienced musicians can bring the magic to. This is far from punk, children; this is the fucking Bach of pop. 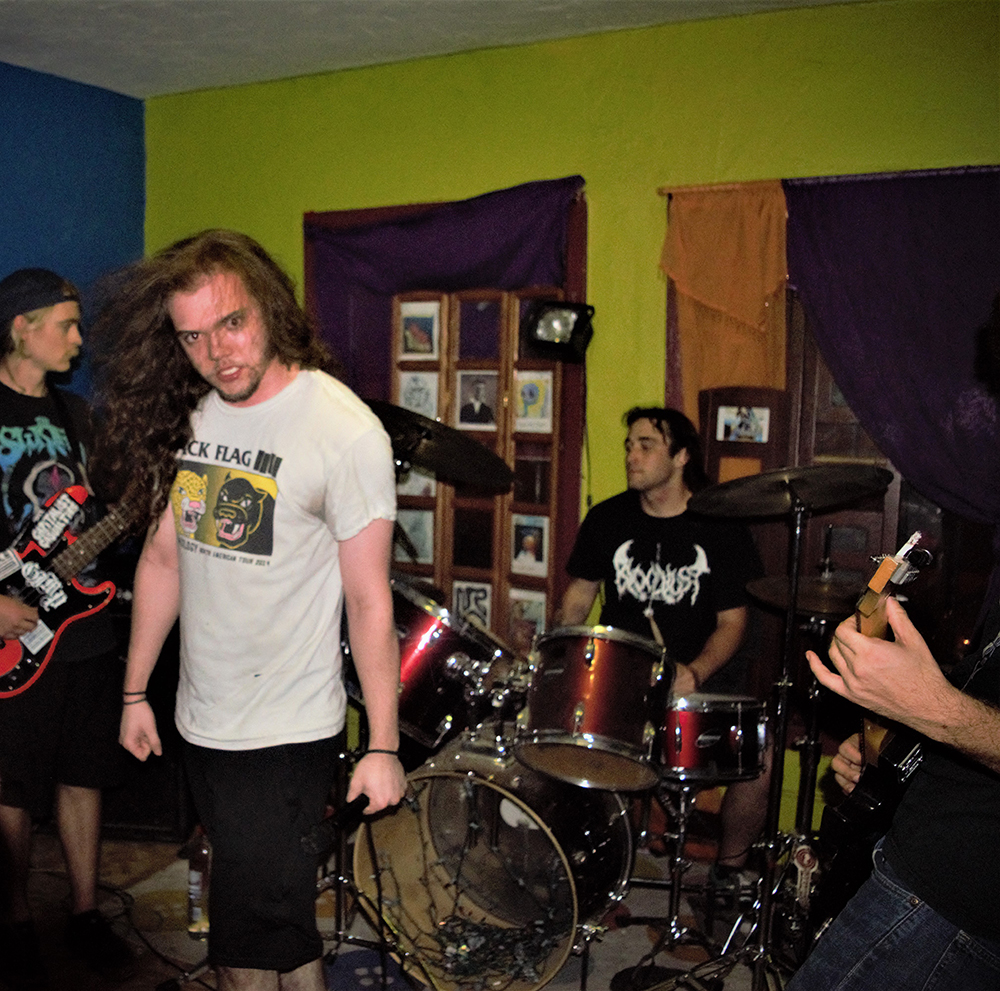 As the night stretched on and the attendees became a degree more sloppier, there was no better time for the reunion of caustic hardcore punk unit, Heatstroke. There were quite a few posts online which buzzed about their reunion, and it wasn’t until the day of the event drew closer when PPC caved with the big news: Heatstroke was back.

“Who the hell is Heatstroke,” my brain questioned throughout the night. But before I knew it, the four members of the band that hung up their jackets in November brought the guns out once more to close out the evening of well-mannered debauchery.

The crowd, specifically folks who searched for something rowdier, smushed themselves into the main performance area and later transformed the space into a make-shift moshpit. Armed with a heady 12-song set, each member took the opportunity to connect with the crowd who were more than obliged to return the favor to match the humorous and undeniably devious lyrics which dotted their performance. Most likely related to my unfamiliarity with their catalog, my failing eyesight focused in on the majestic long-haired vocalist in front of me who exuded the natural brash charisma and level of crowd interaction every performer should take note of.

The zeal Zach possessed either caused audience members to join the mini-pit or leave before they were pulled under. Even with the technical difficulties scattered throughout the set, the urge to entertain the crowd never left each members’ eyes. As musically diverse as the night was, Heatstroke proved to be the perfect cherry-on-top for those looking to get their angry rocks off. If Sunny’s Drunk aesthetically represented the smooth-talking, gentle souls of my past, then Heatstroke musically represented the rock star personas I continue to encounter in my present.

My favorite part of the set was during the encore when one attendee shrieked “GET UP!” to her stubborn boyfriend sitting in an armchair, next room over. The banshee-like noise caused a momentary silence throughout the entire venue, band included. 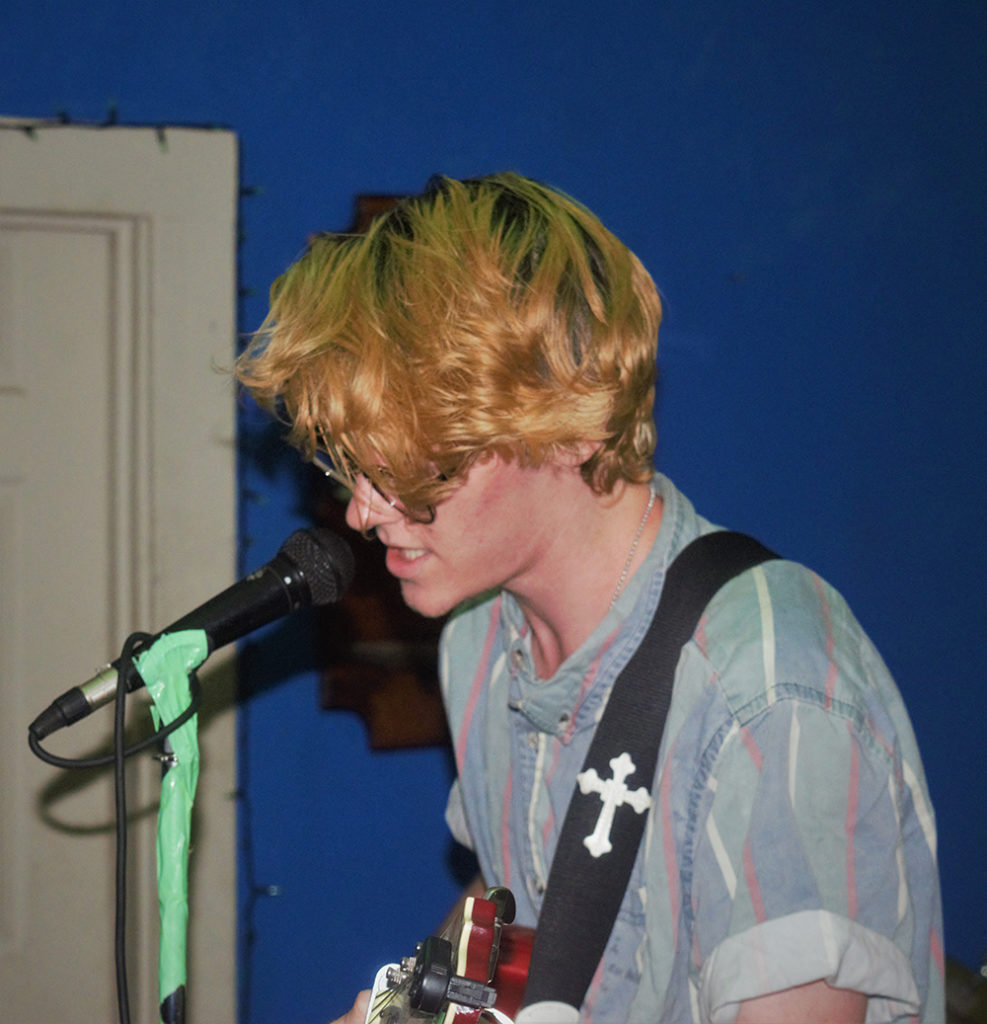 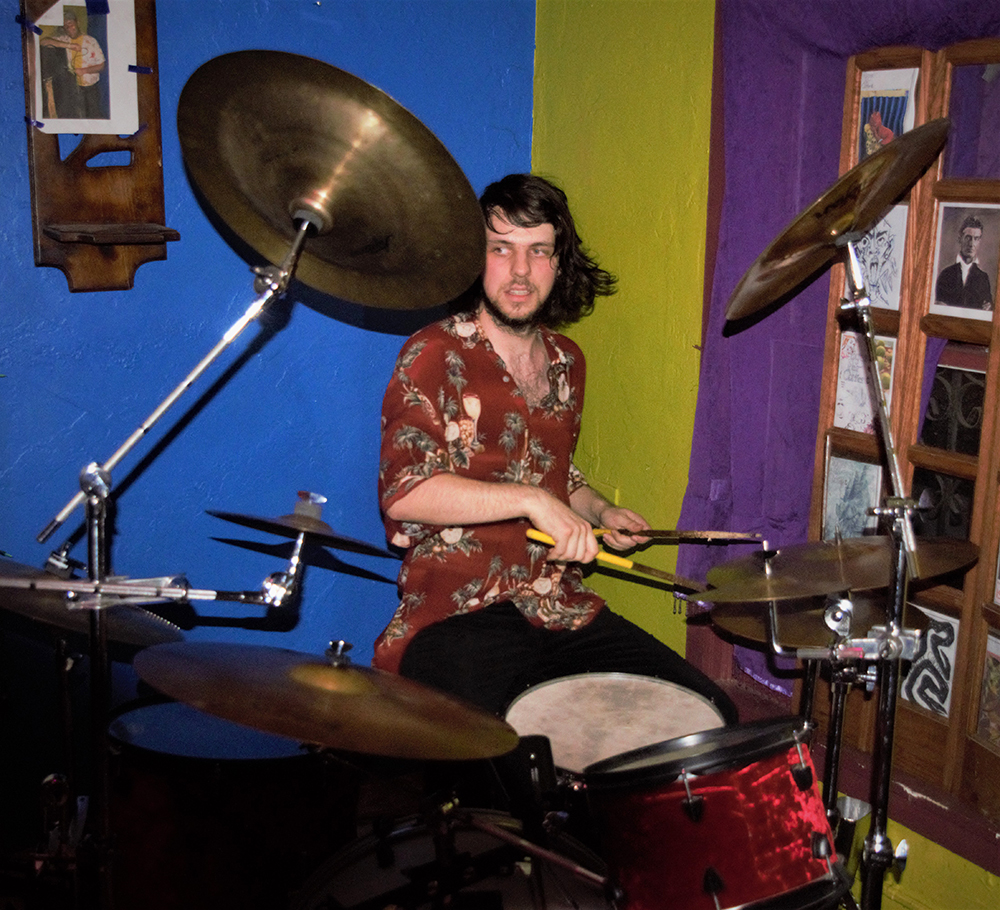 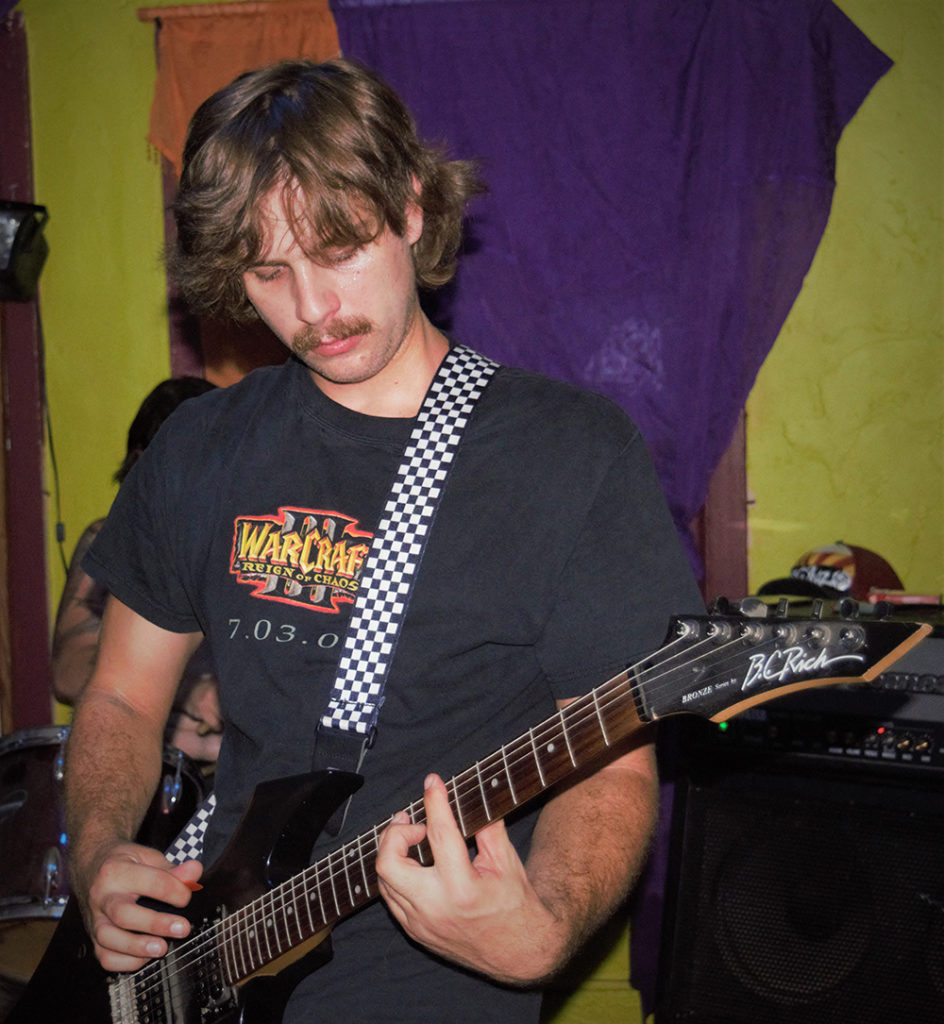 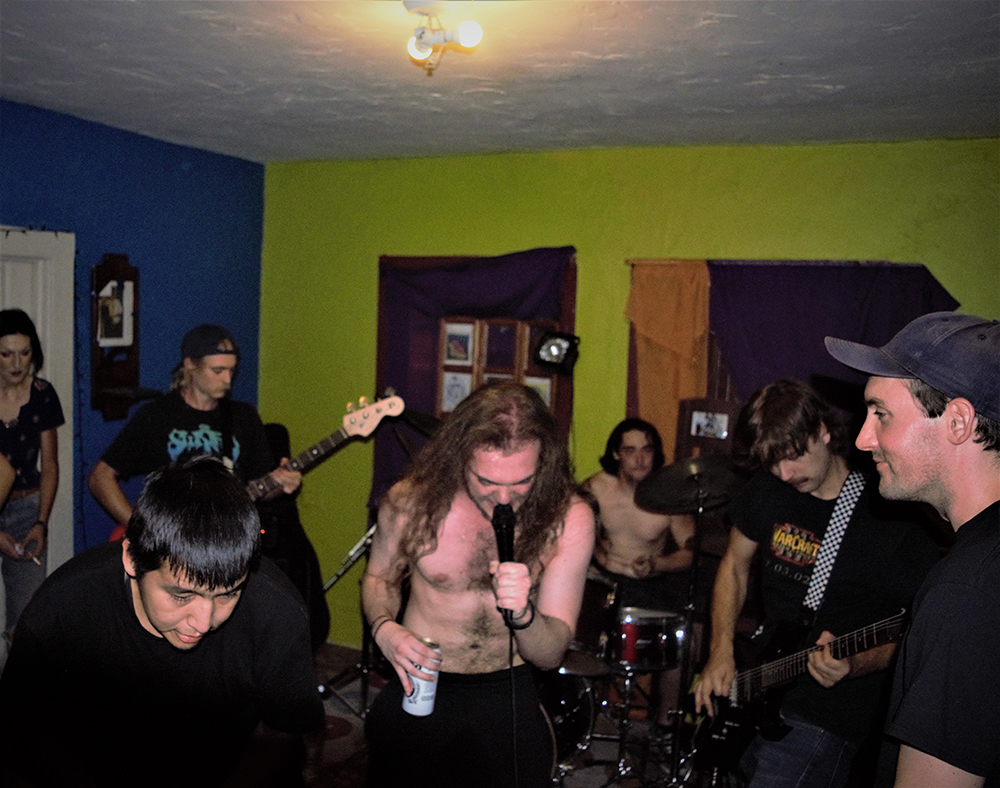 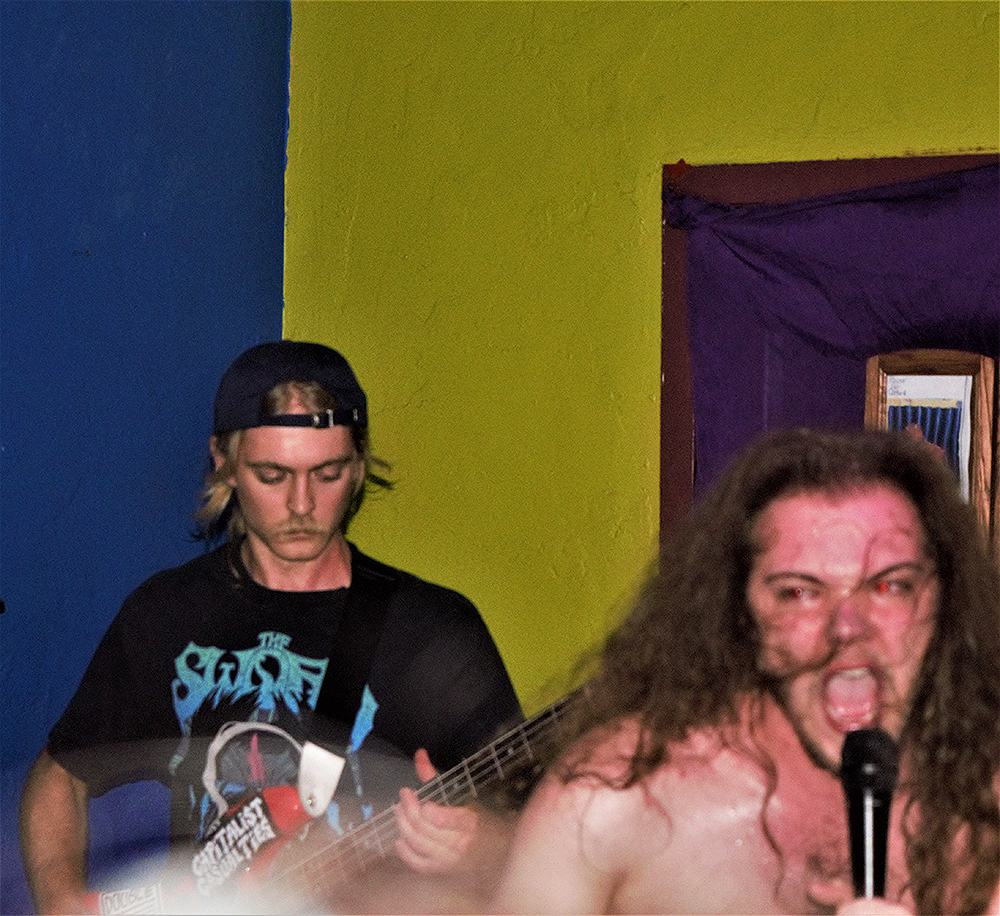