Now, I’ll be honest here. The first time I listened to Beach Haze, the new album by Phoenix quartet Oliver House, it wasn’t until halfway through the album that I realized how great this album actually was.

You know how it is. You go to put on album, often an album that you really want to hear, and because of multitasking, getting work done or paying bills, the songs end up becoming that most dreaded fear of all musicians — background music.

And when I think back to that very first listen, that’s exactly what was happening with Beach Haze until “Chelsey May Bae” came crashing into my life and forever changed my perception of both this album, and the band.

But I’m getting ahead of myself. Oliver House is Sean McCauley (vocals/guitar), Holden Flesner (drums/vocals), Dan Horner III (bass/vocals), and Ross Herbert (guitar). Beach Haze was released back in the Spring and I’ve now listened to it countless times for both reviewing and enjoyment purposes. It’s one of those albums where I always hear something new, even when I think I’ve heard the song enough times to know everything that goes into it.

I believe my initial reaction to Beach Haze is in part due to album opener, “California Blonde”. While it certainly shows off the experimental brand of alternative rock that Oliver House creates, it’s just not a personal favorite, and I kinda’ glaze over it.

“What Now?”, the second track, is where I really start to feel the Oliver House sound. Opening with a syncopated drum pattern in 3/4 time with an off-beat snare, as the guitars come in, followed by that shaker, a wonderfully polyrhythmic effect takes hold. As the chorus comes in and that snare drops in time with the other instruments, I can’t help but feel the groove.

Beach Haze, in title, does not disappoint. The surf, sand, and sun all convene together on this album and songs like “Talk, Touch, Feel, Breathe” and “Beach Haze” remind me of such notions. Oliver House fall into that Phoenix category of psychedelic-surf-indie-math-pop occupied by such contemporaries as Strange Lot and dent. I, for one, love these desert sounds that stretch all the way to the driftwood.

OK, so “Eye of Her Mind” really can put you in a trance like state. It’s happened to me on multiple occasions. The fact that much of the same riff plays throughout the entire song might have something to do with it, but even the tones of the guitars as well as Sean’s vocals all add to the hypnotizing effect.

Like many of the best songs written throughout time, “Chelsey May Bae” is a song about a girl. And, while it isn’t actually my favorite song off this album, it certainly captures my attention and is fun to listen to despite the heavy subject matter. It’s also the only song that sounds quite like this on the entire album. And Beach Haze is an album. In every italicized sense of the word. It seems like many albums released today are just a collection of singles with no real cohesiveness between songs. As “Chelsey May Bae” segues into “(Something Cheeky)” I’m reminded how much I miss moments like this.

“Fall Apart Pt. II” is for all the Oliver House fans and serves a rocking reference to the band’s first album and a fine counter-point to the original song. From here, Beach Haze broadens and grows encompassing blues, jazz, and more experimental sounds, before finishing with the powerful closer, and first lead single, “Vertigo for the Time Being”.

I was interested in finding out more about this album so I fashioned up a few questions and the band took the time to answer them. Read on to find out more about the Beach Haze sound as well as what lies beyond for Oliver House. 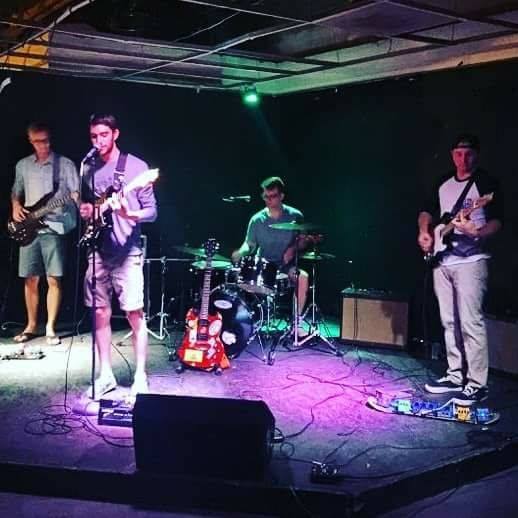 YabYum: I definitely notice a maturation in sound between your first album, Fall Apart, and your new album. What did you guys learn in the three years between the two albums?

Oliver House: In the three year period between albums, we rotated musicians in and out of the band lineup until our original bassist – Dan Horner III – expressed his interest in returning to the band. We also learned to “sit on songs” longer and be more patient to hopefully let the melodies digest before we add on to them. We also made an effort to insert changes into the songs, whether logical and bizarre, to help make the tracks more unique.

You have new member as well, Ross. How has he changed the Oliver House dynamic and how did he start to play with you guys?

Adding Ross into the band allows us to expand our live sound to incorporate more than one guitar, as well as more interesting sounds.

Are all Oliver House songs a group effort? Was there any difference in the way songs were constructed on Beach Haze?

Beach Haze, more so than Fall Apart, was truly a group effort. Most of the songs were born through the process of jamming together. We recorded every practice and listened back to the recording, picking apart which sections we liked so that we could further expand on them. Songs like “Vertigo for the Time Being,” where our drummer Holden Flesner wrote most of the melody and the lyrics, illustrate the culmination of weeks of group work while songs like “Nothing I Have is Enough,” written years ago by vocalist and guitarist Sean McCauley, was primarily his own brainchild.

You guys seem to be fans of instrumental songs and include multiple instrumentals on your albums. Is this just when one of you cant think of any lyrics?? (This is a joke. Clearly, psychedelic/experimental instrumentals round out the Oliver House sound and do well to counter-balance the alt-beach-pop-indie you guys also play.)

The instrumental songs are essentially the product of the band goofing around oftentimes late at night. We feature the instrumentals as somewhat of a “connective tissue” helping to connect songs and parts on the record. We usually leave the songs as they are and feel that the melody of the songs is strong enough to propel the songs forward. So, we just let the guitar do the singing.

I see you guys recorded with Brandon Simoes again as you did your first album. He too has gone through a maturity in his recording process as I find Beach Haze sounds better than Fall Apart in my opinion. What made you want to continue to work with him? I also understand, that once a band finds “their engineer” they tend to stick with that person and that may be exactly what’s happening here.

Brandon was an absolute pro at coordinating and recording the songs. Not only did he supply some of the equipment, but he gave us his advice in terms of the textures and tones in the songs. It was a great experience recording with him, just as it was a great experience three years ago when we recorded Fall Apart (which was recorded in one day through the night). Beach Haze, in contrast to Fall Apart, was recorded over the course of many months with repeated listens. Brandon has multiple tools up multiple sleeves and we highly recommend him to other bands.

What was the most difficult thing you guys had to do in making Beach Haze? How about the easiest?

The most difficult part of recording Beach Haze was the revolving door of musicians that played with the band over the course of three years while we wrote the tracks. Each musician brought with him different ideas, tones, and energy to the songs making it difficult to lock into a specific sound or tone.

The easiest part of recording the album was welcoming bassist Dan Horner III with open arms back into the band on New Years Eve, 2017. Welcome back, Danny boy! Another easy part of the album process was deciding the album cover, illustrated by Kendra McHugh, featuring drummer Holden’s resident cat Figaro (or “Fig” for short). Kendra did an excellent job capturing the feel of the band’s sound and channeling it into a visual portrait.

I love “Fall Apart Pt. II”. How did this version/ continuation of the title track off your first album come about? I imagined one of you guys just starting to play it that way one day and then the rest of the band just picked it right up but I could be completely wrong about this.

You got it! Nothing to see here – just a bunch of non-metal heads channeling “The Trooper” by Iron Maiden to perfection.

I feel it takes some guts to have your first single off this album be the 6 minute album closer, “Vertigo for the Time Being.” Although, with that said, it definitely does have a very inviting sound to it so I guess I’m just thrown off by it’s length. Is having a single this long something you guys did on purpose?

We felt lead single “Vertigo for the Time Being” is the best representation of Oliver House’s sound and vibe from the album. It features multiple singers (Holden sings the verses while Sean sings the choruses) and several different guitar licks and transitions throughout. When the band was discussing which track should lead the album, there was really a consensus around this track despite its nearly six minute run time. Simply put, it’s our favorite.

What’s upcoming for Oliver House? Any shows/tours in the works? Are you guys always working on new material or do you take a break from writing between albums?

We have a few upcoming shows, one on August 3rd at Time Out Lounge in Tempe and one on August 21st with Starover Blue (from Portland, Oregon), though the venue is yet to be determined. In terms of writing new material, we are writing around the clock and have many unfinished songs just waiting for us to put the finishing touches on them. We are excited to see where we go from here! 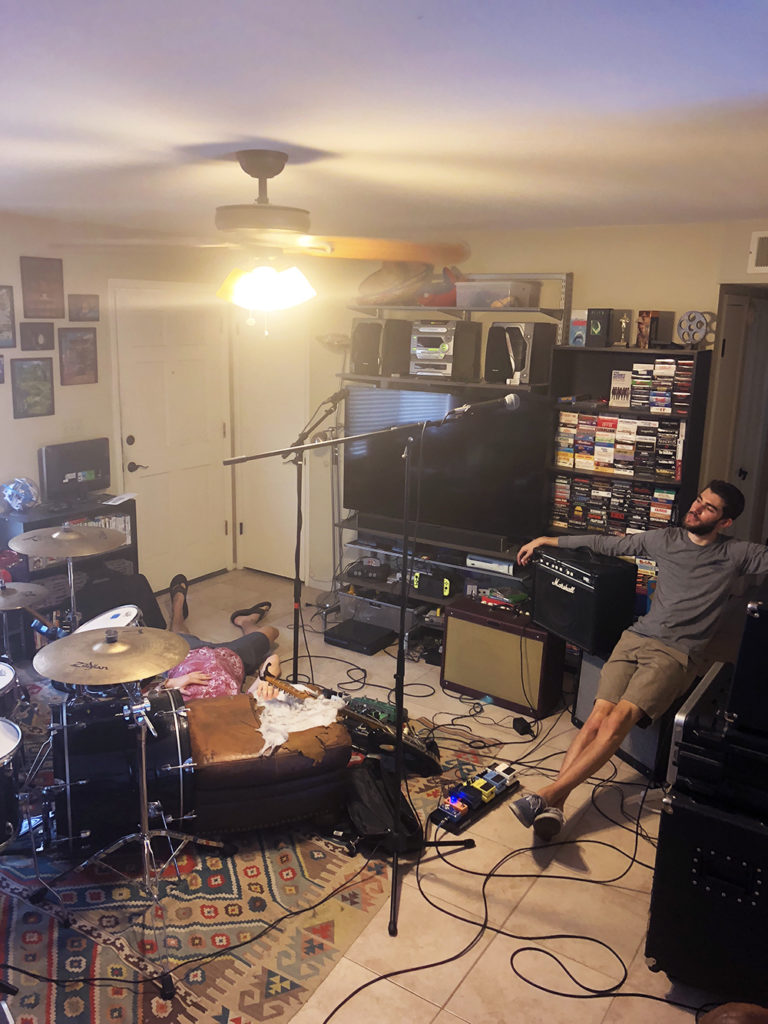