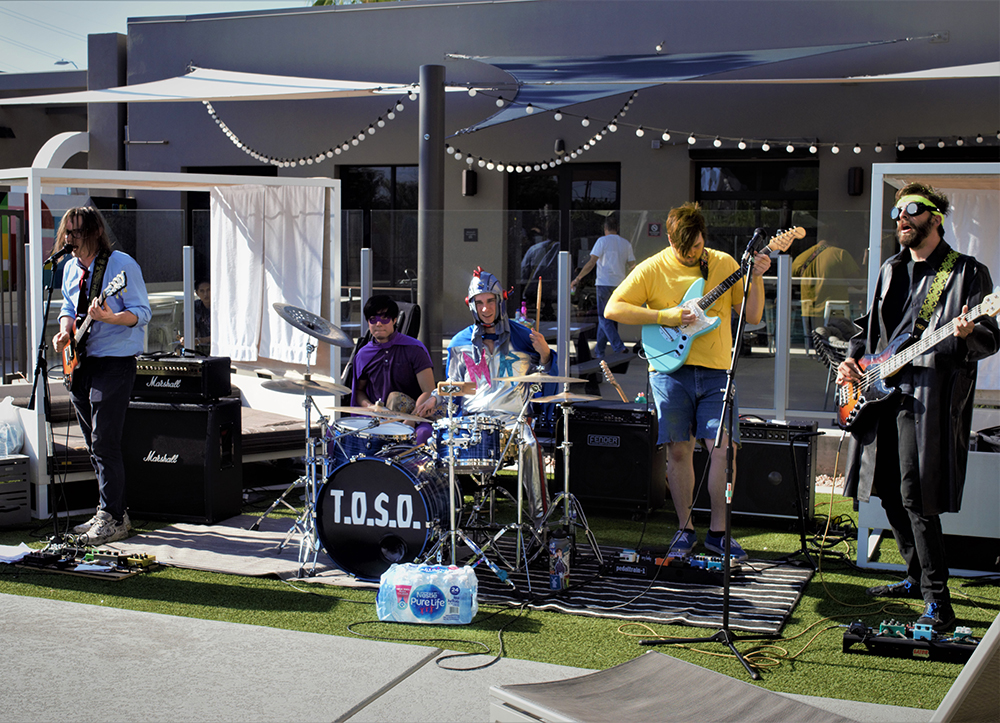 TOSO | all photos by Logan Lowrey-Rasmussen

I can’t explain to you how good I felt on the afternoon of August 4, 2018, as I was slated to cover the Endless Bummer 3 Pool Party hosted by Bloody Basin and featuring the bands Sad Dance Party, The Linecutters, The Echo Bombs, HEX Wave, and T.O.S.O.

After skipping one meal and going on an ill-advised run in the Phoenix heat, I desperately tried to fill the empty hole inside of me called “low self-esteem” as I stared my stark, chalk-white body up and down in a full-length mirror and exclaimed: damn. I felt like Judy Garland on a particularly great day during the filming of 1944’s Meet Me In St. Louis, right as her soprano dipped into a distinct, husky alto due to barbiturate use. Even after attending the antics of the Closet Goth Tour Homecoming Show at the Trunk Space the night before, the strange invisible entity controlling the outcome of my life allowed me to feel socially prepared and miraculously ready for some tropical Arizona pool party fun.

Did I say tropical? Well, as tropical as you can possibly get in the middle of a Tempe, Arizona hotel pool next to ASU’s campus. The intermission music featured the likes of The Tom Tom Club’s “Genius of Love”, and combined with my gin and soda, must have contributed to the mental vibes I felt in-between the visage of the occasional attractive gentleman-caller. Auditory hallucinations aside, I found myself a comfy spot on a lawn chair directly diagonal from the stage where TOSO and “The Adventures of ManRic” would commence.

I was immediately impressed for two reasons: a band as locally prolific as TOSO were not only playing the first set of a sweat-filled mini-fest, but they were also prepared in full garb to deliver another episode of their thoughtful musical narrative. As Zach donned his knock-off Clark Kent pseudo-reporter of the Phoenix New Times, there wasn’t much time to get the reference before jokes were cracked about the publication itself. The intro of the acoustic “ManRic Theme” quickly set the tone for fast-fired jokes and thoughtful humor which exceeded the confines of meme culture and reminded me more of Adult Swim circa 2001.

Although their set was comparably short to when I’ve witnessed their headlining set, the quick-draw nature of the constructed narrative made it the perfect vehicle to not only showcase their most recent tracks from The Waste, but included some bonus performances like “Hungover Forever” from The Cleanse, “RoboDick” from D.E.M.O.3, and “T.O.S.NO” (which I can’t find the source of). Personally, my favorite character from the TOSO crew arrived heroically in the form of Eric Ellis playing the fabled “ManRic,” as he attempted to thwart the plans of “Dr. Mank” played by equally-charismatic Marc Ellis.

The climax of the plot arrived when Dr Mank somehow “forced” (more like encouraged, I see what you did there!) the crowd to mosh in the exhausting heat, and another event where Dr Mank “poisoned” ManRic with LSD. The day was eventually saved when the humble “Phoenix New Times reporter” revealed himself to be a hero of his own, and helped thwart the plans of Dr Mank. With a better understanding of the TOSO expanded universe and as a witness to possibly one of their most grueling-hot performances in the sun to date, the band proved themselves to be true performers to their craft in the most dire of conditions. TOSO had the choice to come in complete pedestrian clothing and play their songs straight through with no expectation; but instead, they chose to bring the level of creative professionalism we’ve become familiar with and deliver an entire floor show within this short set.

Was this performance a complete hallucination on my part when TOSO possibly poisoned the water supply? I suppose we will never know. 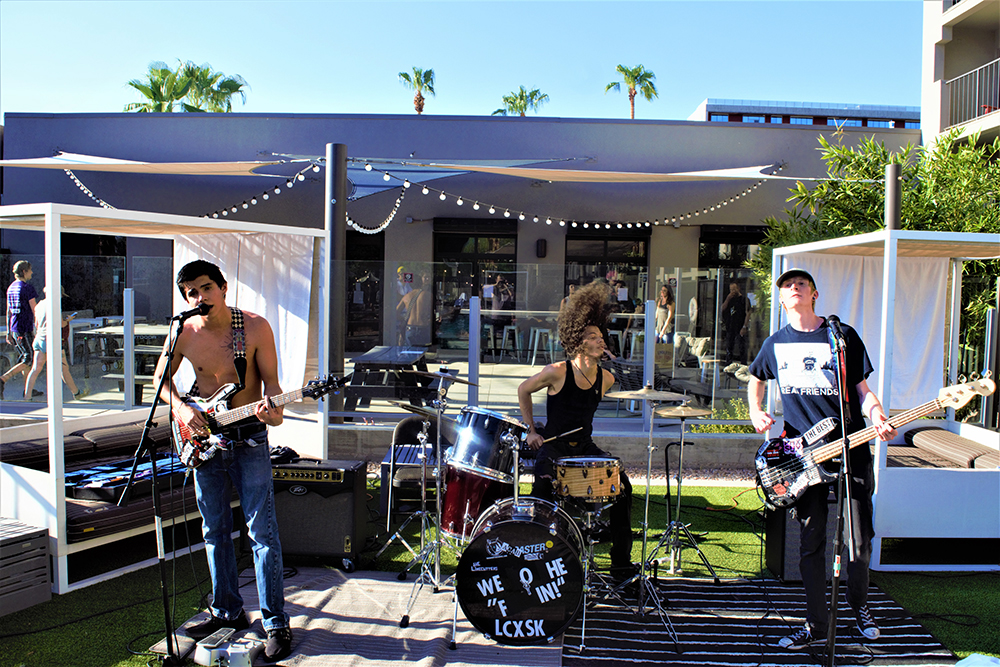 As I proceeded to lounge and mingle with friends both new and familiar, the welcomed threesome we’ve come to know as The Linecutters took their rightful spot pool-adjacent, and looked apprehensive of the conditions laid out before them. This perceived apprehension on my part quickly fueled the pure adrenaline and pandemonium as each member fought for their lives via their respective instrument. While I found out later their set was loosely structured, it would be tacky for me to claim they “played all the hits.” I mean, they aren’t Cher, dammit, but there are few local bands I know who have fans so reverent to shout back the lyrics to “Mothafuck a cop” (stated modestly by bass player and co-lead vocalist Chuck Arock as their ‘view on law enforcement’) or songs from their 2014 EP, Pirates of Suburbia, which are still cherished by the Linecutting faithfuls and are given nods throughout the setlist.

No matter what Linecutters show I attend, I have come to admire their consistency on stage, as they will quite literally shout their way through a vocal sequence as long as it means giving the crowd what they want. While some acts fall prey to the small mistakes which happen throughout a set, The Linecutters manage to keep their head up high and deliver their Shake’n Bake mix of ska, reggae, and good ole-fashioned punk. They could probably play one song on repeat for the entire set and I would still manage to be entertained by the continued passion they drive into their performance. The sun continued to oppress my good nature, but the contemporary hometown hard-surf-garage rock sound of The Echo Bombs (with Chad B Dennis filing in for Michael Reagan on drums) made the last phase of blaring heat a little lighter on my decaying body. As rock and its associated early-00s stylings continue to decline in popularity in relation to the rise of hip-hop and electronica, bands like The Echo Bombs are keeping the hardy garage-rock sound alive through incorporation of other sub-genres, like the recent resurgence of surf rock elements. Their set may have included certain staples of alternative rock, but tracks like “King of Uncool” displayed their aversion to the actual culture with odd-ball notes and a vocal style which serves more of a “fuck you” to the past of what 00s rock devolved into.

As I watched them through multiple tracks and singles dating back to their 2014 full-length LP, I realized the sounds I used to recognize in my childhood are still alive and well, albeit presented in a different form than “the man” advertised from his comfy Capitol Records chair intended. In the absence of mourning the “decline” (as if there was ever an up-ramp) of radio rock, we are introduced to rockers who took the best bits of modern rock and threw away the ugly conventions brought about by commercialism.

The Echo Bombs have a tradition to carry on with some quirky B-52s / late 70s new wave mixed in for good measure displayed both in their studio and live performance and who the hell are we to tell them “No”? Sometimes the most “punk” thing a band can do is be themselves, and the casual vibes offered in the aesthetic of The Echo Bombs leaves no “echo” for question. 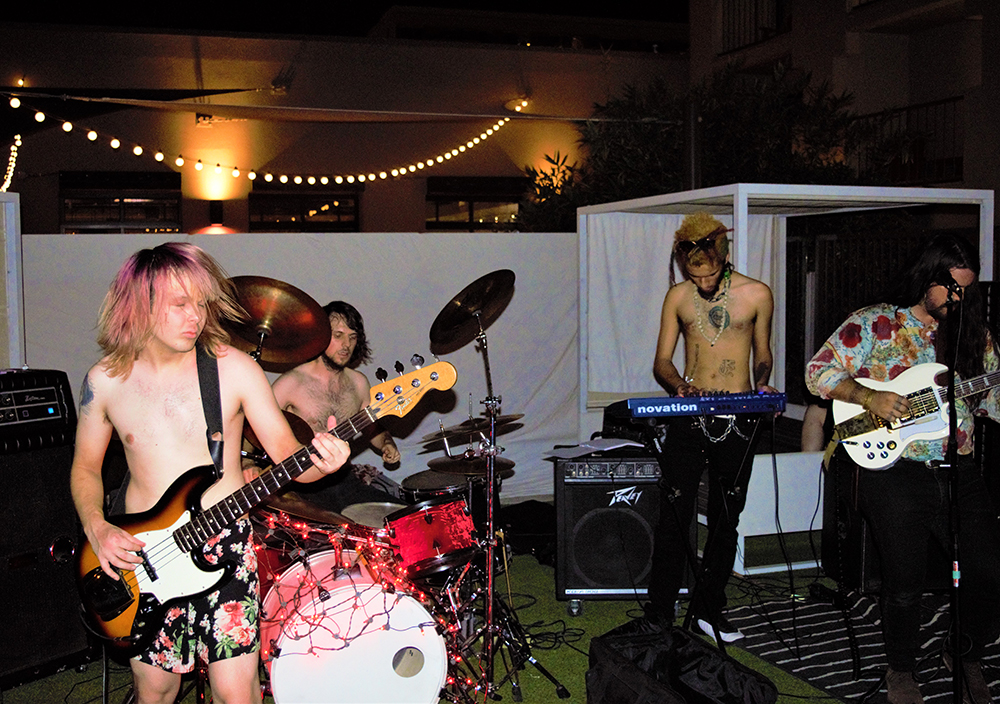 As the sun finally set on this especially tepid outing, HEX WAVE began to set up their equipment and donned the drum kit in bright red Christmas lights to complement and offset the impending darkness. It was brought to my understanding that this would be the final performance of the self-described “Slimy psychedelic deathrock,” a statement later confirmed by bassist Max Martin when contacted for comment:

“Basically, we’re just moving in another direction musically because HEX WAVE has been together for a while, and [we are] still playing music from our last project,” Martin said. “We’re moving onto a new, more matured sound and already have quite a bit written!”

For the crowd and band-alike, this departure was much less sorrowful as it was more “business as usual.” Armed with the zeal as if they’re four-track 2017 Demonlust EP were still brand spankin’ new, Matt on drums confidently guided the psychedelic vibes as the raspy vocals which stemmed from Max and Josué Kinter on guitar and vocals alike filled the evening air. Rich in a scattered layer of sound which bordered psychedelic world-building and a heavy dose of distorted surf guitar, the infectious witchcraft nods the band gave their aesthetic (especially during “King of the Surf Witches”) a distinct branding different from the various obscure acts who have infiltrated the valley in the past.

By the time darkness fell on the entire pool-side, HEX WAVE finished up their triumphant set with the closer, “Unholy Tide,” gearing the crowd up for the pandemonium which would be felt during the Sad Dance Party set to follow. Although this wasn’t as somber as I would expect a farewell performance, the “business-as-usual” vibes contributed to the sheer ecstasy certain members of the crowd felt and made me feel thankful I could experience HEX WAVE in their final glory; this wasn’t a farewell set, but a choice made from growing up and new beginnings. 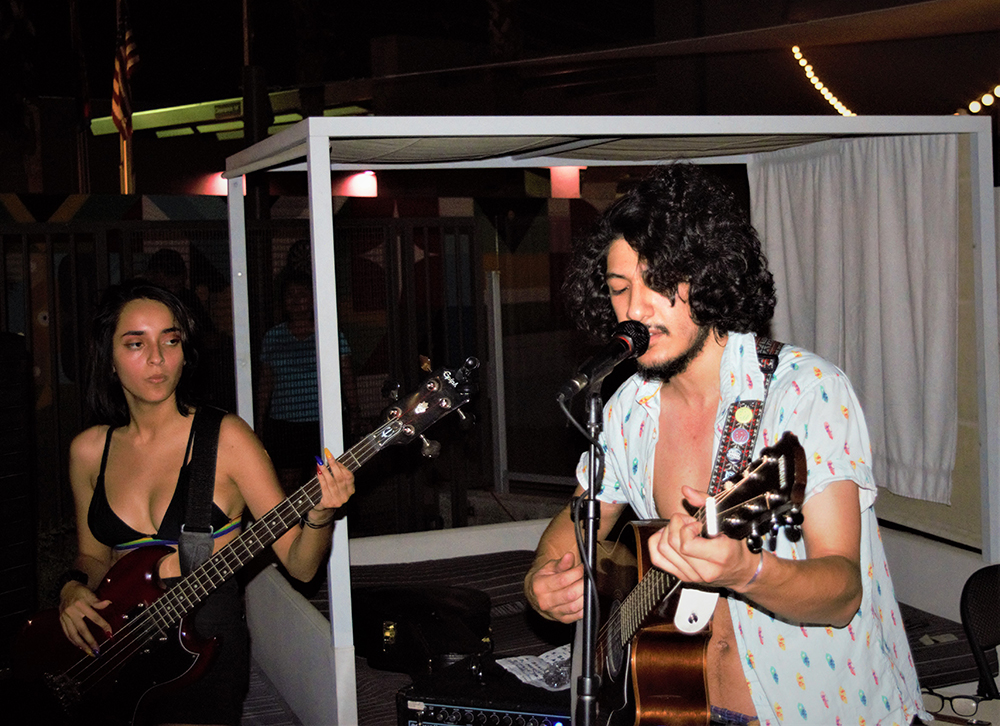 With the absence of billed-band Man Hands, Sad Dance Party took the final spot in the lineup with half-electric/half-acoustic elements provided by frontman Peter in “The Beginning,” that lead into an ambitious thirteen song set that reinvigorated my dopamine drop. As “Bad Drinker” came after the brief intro-track, I realized the ethos of Sad Dance Party relied just as heavy on the confident writing of the troubled, uncertain nature of the lyrics. I could be quick to point out the angst in the lyrical style of some artists, but Sad Dance Party took angst to the level of deep chemical imbalances paired with the strained vocal stylings of Peter. Popular track “Kendrick Lamar” featured him in strained voice moving into another key as the entire ensemble fought through the remaining humidity from the pool-party antics and kept pace with catchy folk-punk stylings interrupted by an intense guitar solo from Will; this later finished off by their iconic “Darth Vader part” as it was referred to over the mic.

The reserved nature of the Sad Dance Party ensemble only gave their set even more credence to the compositions of a constant life-crisis through peppy dance tunes the crowd could relate to. When things temporarily slowed down for a track like “Beautiful,” the careful tenor of Peter displayed a cool vulnerability and solace, a feeling not always captured in their upbeat “dance” tunes found in other parts of the set. “Mercedes Benz” harked back to the days of early 00s pop punk and hit the nail on the end when meta-referentially referring to the music I and most of the audience members grew up with, somehow arriving full circle as we tepidly enter our early to mid-20s. Life is full of made-up connections and small discomforts.

As the set closed out with the solo number of “Break Me” and “No Such Thing,” both the ethos of pathos of what made up Sad Dance Party left me ajar. I could no longer relate to the young heads bobbing throughout the crowd, but the values SDP wrote in their songs spoke across generations; at our heart, we are all scared, lonely, insecure, and trying to have a good time.

I had a great one.

*TJAAA has been omitted from this review 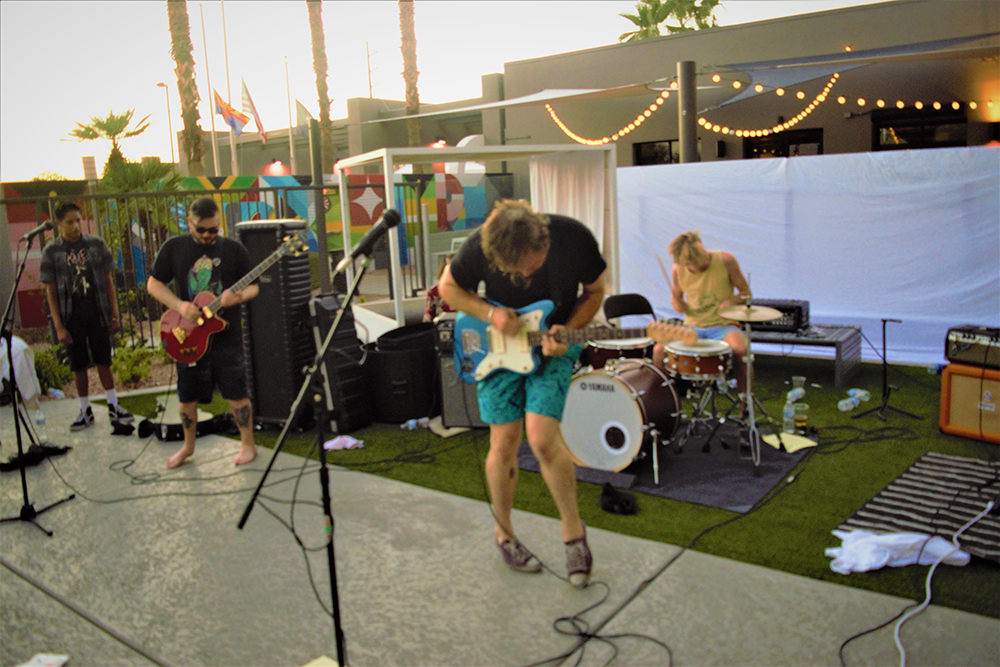 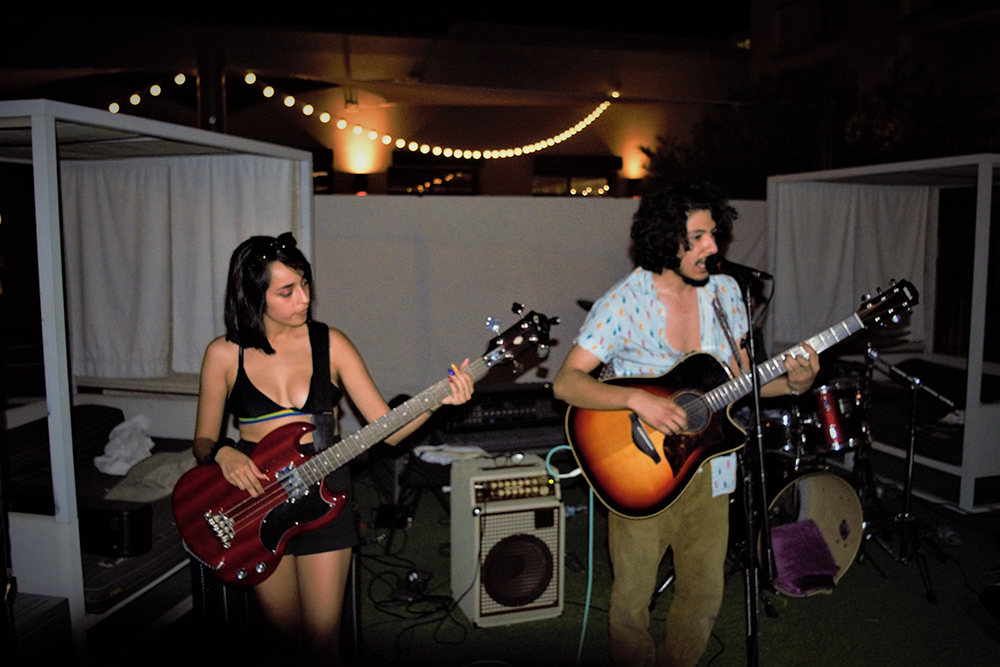 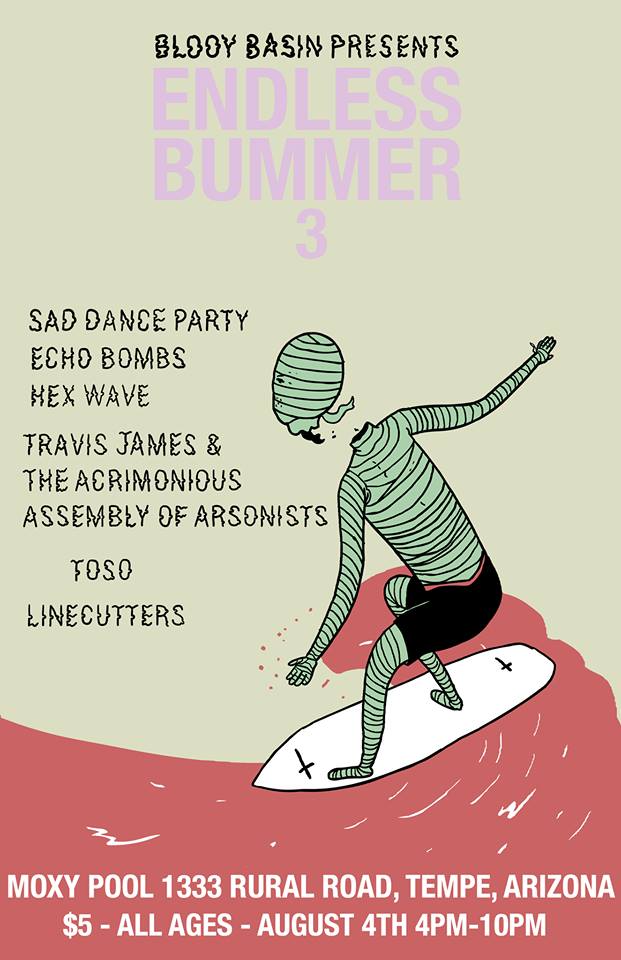