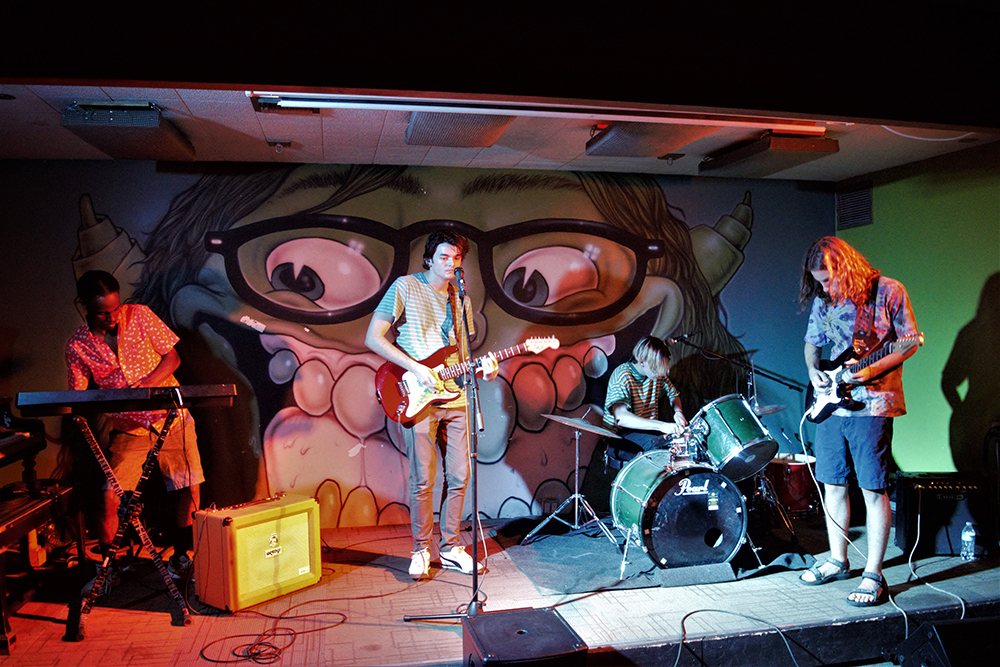 Like my original plan to go to college and make a lot of money, somehow all plans take unexpected routes, lead us astray, and sometimes, to ash trays. My name is Logan Lowrey-Rasmussen, and this is the story of how I ended up at The Trunk Space on August 3, 2018 for the Closet Goth Tour Homecoming show.

Actually, I’m joking; I disassociated on the car-ride there, so here’s the closest you can get to an concert review while I meander through my mental state.

The first thing I remember is when I paid a parking terminal I apparently didn’t have to pay to stay at the venue and, after I created a sizable line behind me, almost had my card rejected due to insufficient funds by Aaron of Closet Goth himself — Jesus Christ, what a great first impression. Later, I actually introduced myself as “the guy who held up the line and almost couldn’t pay” or something to that effect.

But I digress; I randomly showed up to review the event and surprise my editors with ill-timed material, God damn-it, and that’s what I always aim to do! First on the billing arrived an extremely unexpected entry — Spectrum Hues, an actual 60s/70s inspired jam band which I thought were all extinct to time. Of course jam bands are still out there — where there are stoners and hallucinogenic fanatics who like long, drawn out and malleable melodies, there will always be some form of the jam.

Earlier before the show, I awkwardly approached one of the band members in conversation, only to find myself awkwardly excusing myself from a private one I didn’t realize I interrupted. Did this affect my customer service experience? Did success spoil Rock Hunter? Hell, no! When one does enough acid or mind-altering substances, the complete ethics of what Spectrum Hues stood for resonated with my being.

Who were these individuals dressed from casual to tie-dye effortless licking their instruments figuratively? Although each track had a pleasing, calm melody, there seemed to be a lot of thought which went into the vibes of the improv-like jams provided on stage. Unfortunately, their names never became clear even after I spoke to them — was this a work of witchcraft, or was my water spiked? More questions about this set could not be answered via their quiet social media. Regardless of my own living irony as a memory-impaired journalist, Spectrum Hues are a cross-generational jam-experiment who are waiting to find a core audience in a sea of metal, noise, and oddity. The short-yet-sweet Spectrum Hues set passed by with fluid pace, and before I knew it, the humble gents played their last note of the night. 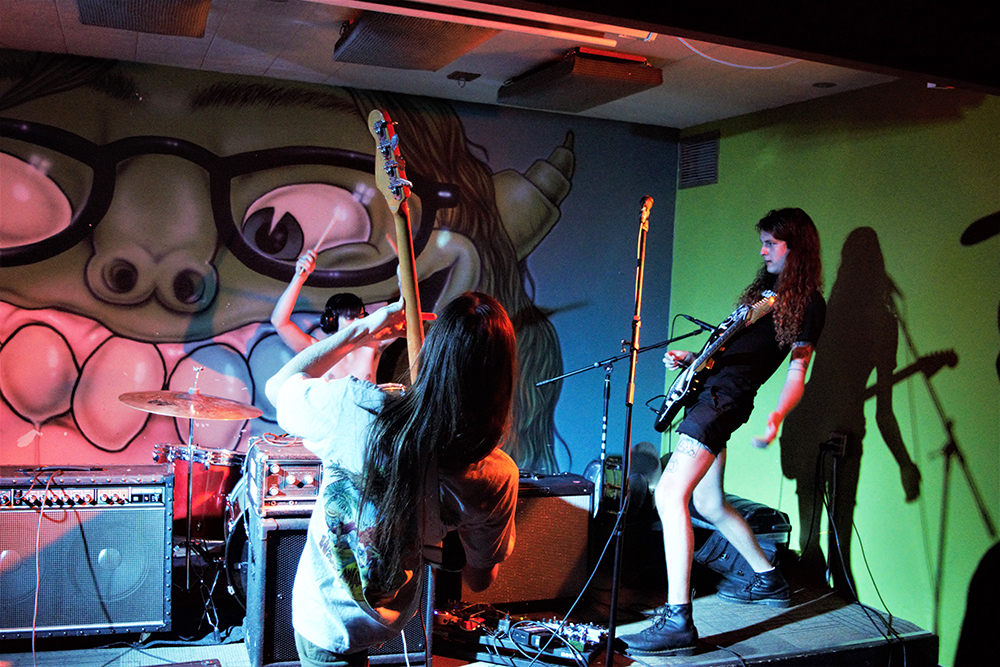 Next on the ticket featured the band that’s been on my mind — when Closet Goth’s Pretty Dead LP dropped in 2016, they were actually one of the first local bands I tried to get into in order to escape the prison of electronic music media I trapped myself in. Due to one situation or another, I never reviewed the album, but waited patiently until they popped up on my radar again like today. Years later after my mini-revelation, Aaron on bass and Col on guitar fronted the band with a cool disconnect with sounds resembling art house more than the traditional slew of metal/hardcore composition.

Closet Goth took no time in explaining what they are about through sound and song. Melodic sections of guitar are played against stressed elements of harsh noise and metal. The screams Col contributed to the set in songs like “I Hate Nazareth” showed he doesn’t necessarily focus on trying to be somebody else with his vocal delivery, but blends his speaking and screaming voice to create an emotional outburst. Closet Goth is undeniably a fun band; the high tempos during the intro of “I Wanna Party” made the entire venue shake as the screamed vocals made me wonder if this was a social experiment of combining two polar emotions together.

Closet Goth’s abrasive style — especially found in the performance of “Babes” — challenged listeners to dance in frenzy but also featured quirky song-writing conventions. As the word punk manages to change in style and split into different communities and subgenres, the standard for what is rebellious has changed from a certain aesthetic and moral belief system, to the “freaky-deaky” of music production, and how a band can separate their act from others. The between-song banter was light, but most of their performances required no explanation: while Alex masterfully pounded away at the drums and supported the electric pandemonium, Aaron gleefully bounced around on bass facing toward his bandmates for most of the performance. At least he wore a T-shirt with a back logo so I had something to look at.

I Wanna Party
Touch Myself
Why Is No One Laughing At My Jokes?
Open
Flock of Seagulls
Is There A Difference Between Red and Blue?
I Hate Nazareth
Babes
Everything Is Spinning

As Closet Goth made way for Space Camp, I eagerly awaited the two intimidating-yet-charmingly beautiful individuals who hailed from my home state of Connecticut. After chatting up June on drums before the show, I complimented them on a Bobby Hill tattoo adorned on their arm; anyone who loved King of the Hill that much understands the irony of a conservative environment and living space. Identifying themselves as “non-binary, non-denominational hardcore,” I felt completely at home with the 100% queer-friendly aesthetic of their set and wished more desert artists would let their feathers fly. At this point, one of my ear-plugs so graciously given to me for free by one of the members became lost and fell out… I foolishly decided to protect my good ear and exacerbate my right ear’s tinnitus because of my own refusal and ego to ask for further earplugs.

Space Camp became the reason why my ear would not stop ringing for three days straight, and I had no qualms about it. I may have other friends that appreciate noise genre excerpts a bit more than I do, but the sheer aggression of musical protest they offered were infectious beyond my own belief. While a third member of their posse was absent at the time, both June and Sam on keyboards radiated stage presence among their colorful and quirky counter-culture instruments. In this defiant display of tracks with names like “Bazooka the Venue” and “Rock The Dwayne Johnson,” the Space Camp experience was one of vulnerability, filth, and reverence; the thoughts and intense emotion behind their performance always gave way to a blasé attitude which doesn’t care whether you like them or not.

Theft Under $1,000
A Shark with a Gun for a Mouth, Pt. 2
Rock the Dwayne Johnson
Have I Gone Bad or Has The World Done Me Wrong
My Mansion in Georgia
Bazooka the Venue
Welcome to my Castle 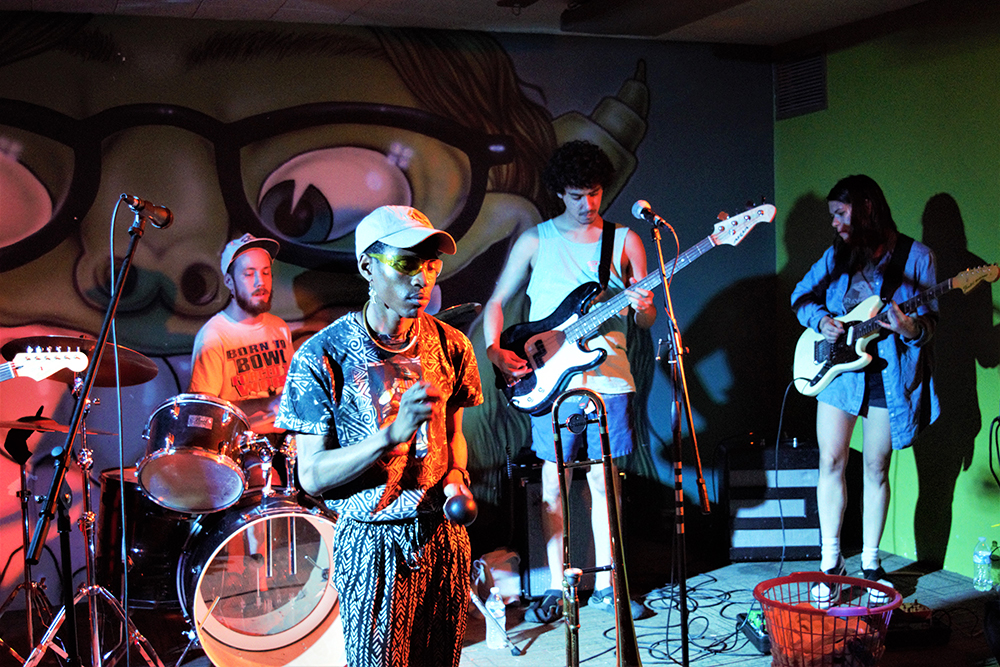 Vibes were quickly thrown into a 180-degree turn when Sun Conscious revealed their style to be (what I would call) “desert jam music.” Apparently, the law of attraction was in effect when I wished for more AZ jam-bands after I witnessed Spectrum Hues earlier in the night. After they assembled their thick ensemble of instruments and began their first jam of the set, I did some Bandcamp-related research and found they had taken an entire four year break before their latest 2018 single, “The Mark.” While some acts take a little longer to get reacquainted with their material, there was a cool calmness, especially through the aux-instruments like shakers which added simple, effective layers to the mix. This perceived notion was not only presented through the familiarity with their work, but also possibly each other. There was never a moment of tension or possible indicator that Yoko Ono was afoot.

At the heart of Sun Conscious, there is a chill acceptance for their home-state scattered among the angst of other acts who loathe it. Some may think the desert is a played out theme used chiefly in the Phoenix Sky Harbor gift shops, but Sun Conscious wholeheartedly accepted their influences, but not without making it clear they don’t belong to old school ways. Although my east coast New England upbringing doesn’t agree with every west coast ideal I come across, it’s admirable to see a band respectfully mixing the culture of the region with their own musical experience. I had no issue when I pictured Sun Conscious appealing to multiple generations with their distinct-yet-culturally-eclectic mode of operation. 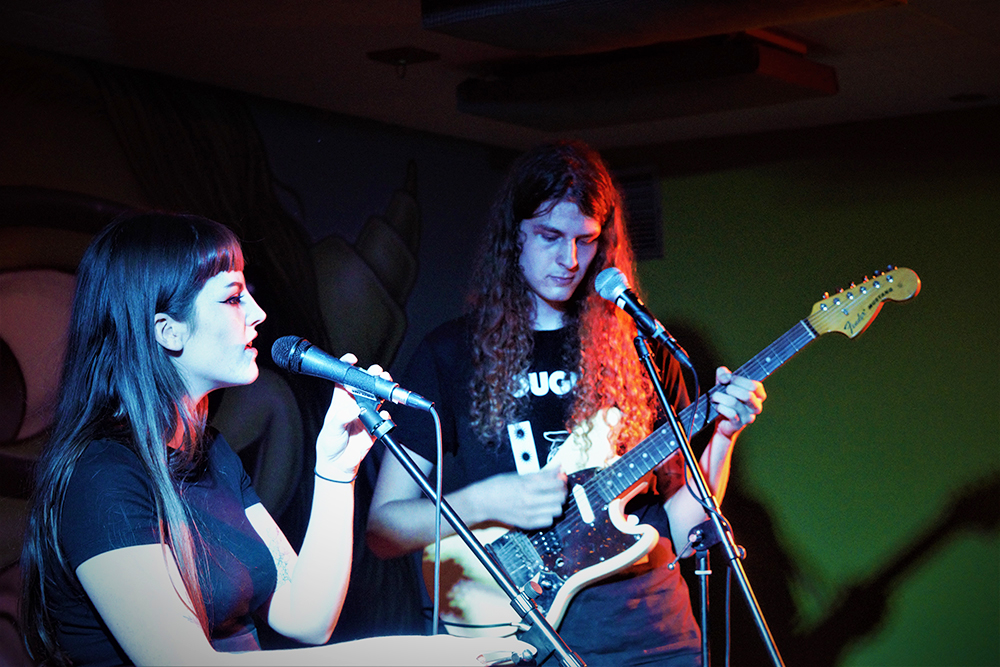 Out of every band, the final set from Best Summer Ever was the one I found myself most unfamiliar with related to my pre-show research but also intrigued by the raw quality of the performance. Fronted with a simple electric guitar, Col of Closet Goth once again took the stage, this time with fellow-frontwoman and vocalist Ally. Described on the event page as a “reunion” show and “first full-band set,” I surely didn’t expect, but did welcomingly greet the simple set-up and duo. After all, life’s simplicities sometimes offer the best solutions in music.

The set began with airy vocals provided by Ally in “That Coyote Has A Knife In Its Mouth,” with Col guiding the melody on guitar. While there happened to be a sense of nervousness on the side of Ally, the “true grit” of the act came out when Col would reassuringly encourage her by glance and she would strengthen her delivery along the set.

Compared to the caustic style of Closet Goth and Space Camp, along with the relaxed-but-masterful deliveries of Sun Conscious and Spectrum Hues, Best Summer Ever established themselves as an outlier by sticking to their indie-acoustic guns and lack of pretension. There were no prepared monologues for the story behind “Funburn,” or fancy riffs denoting major changes: Best Summer Ever is a project filled with love formed by two best friends who share a very tight bond.

As the set progressed through “Bright Eyes Are My Favorite Band” and ended the show with “Annabelle Song,” the set concluded with the same lack of fanfare as it began. While Ally and Col are certainly musicians, they are human beings who came together to write music that means something to them, and the “improv-y” nature of the performance sometimes radiated that honesty. I would rather watch two individuals perform from the heart, instead of witnessing something expertly contrived.

As I packed up my camera and made pleasantries with the bands who had recently performed, the Closet Goth Tour Homecoming proved to be a night which possessed the themes of artistic truth and honesty. If this were any indication of the “new generation” taking over, I can safely say it is in good hands. 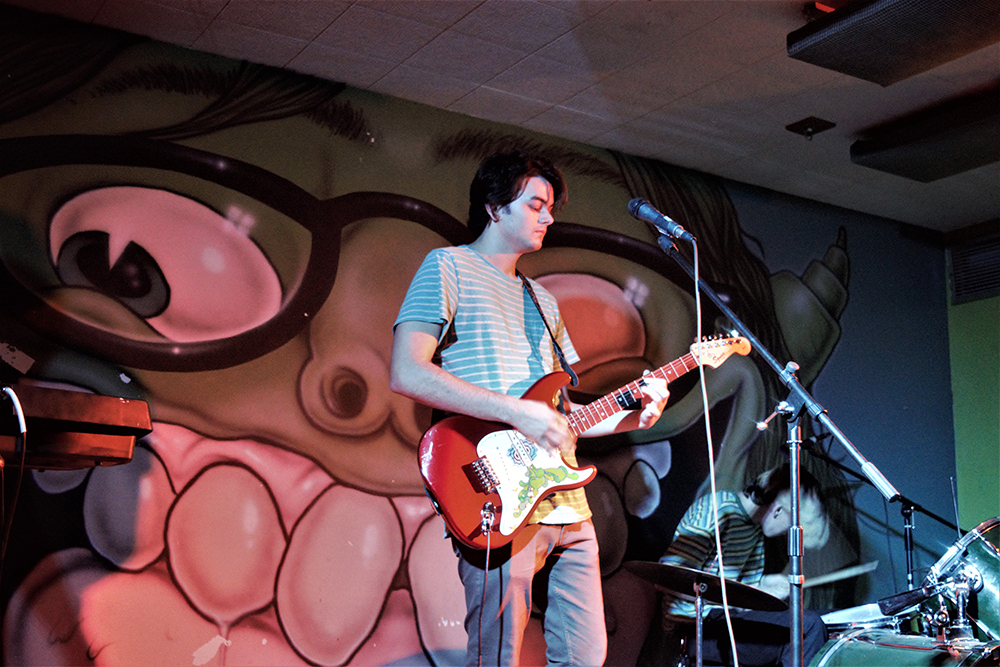 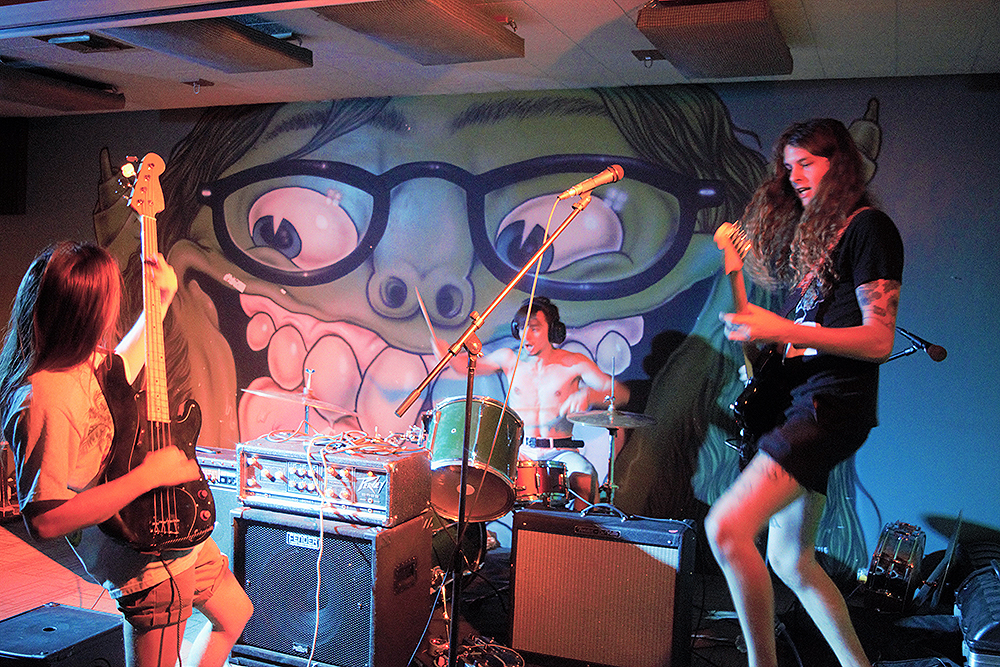 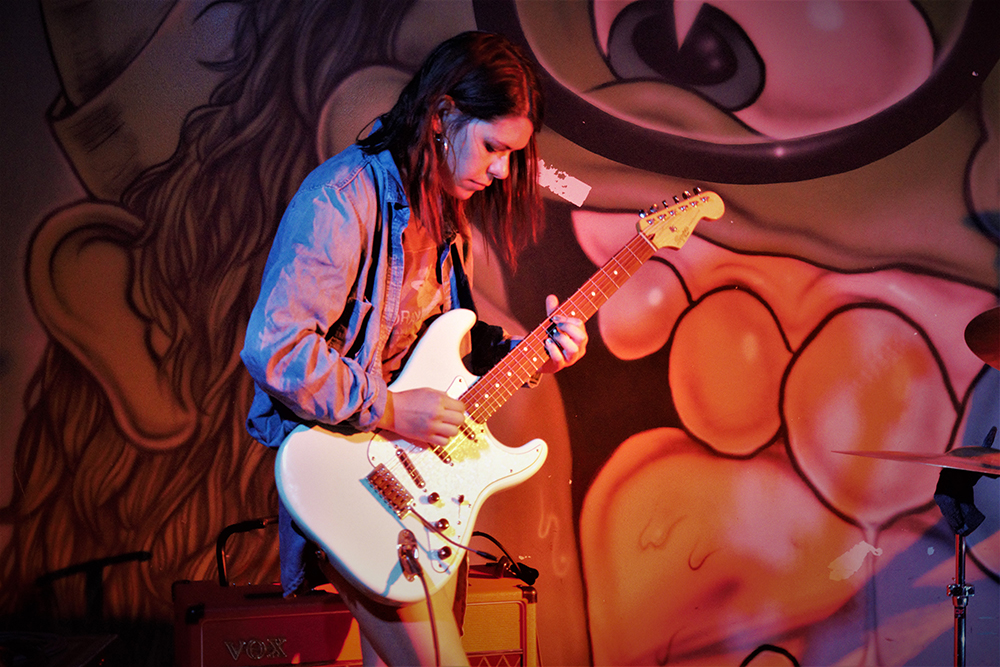 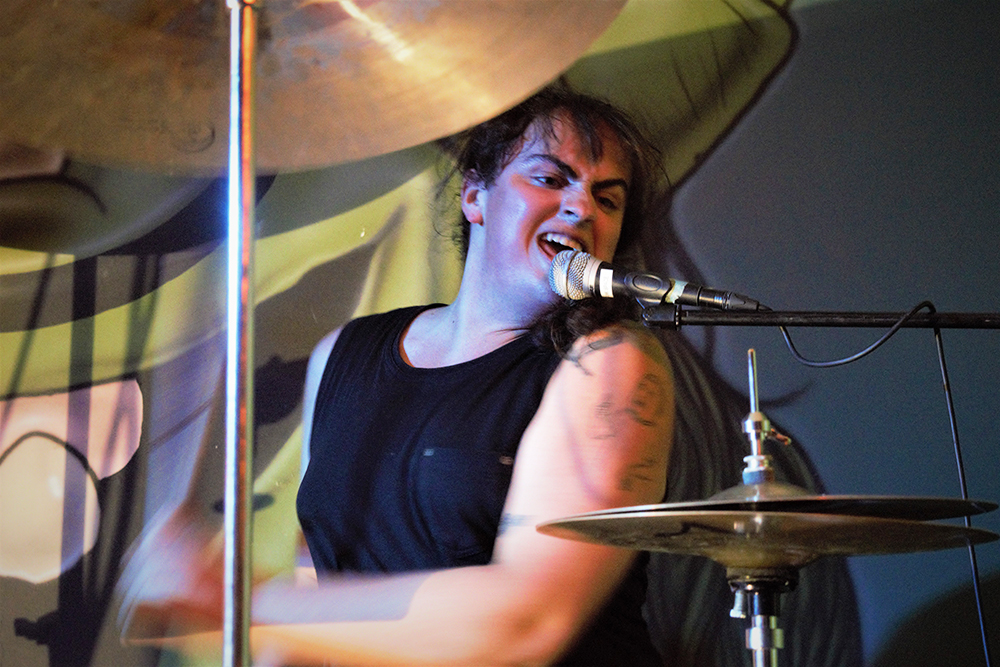 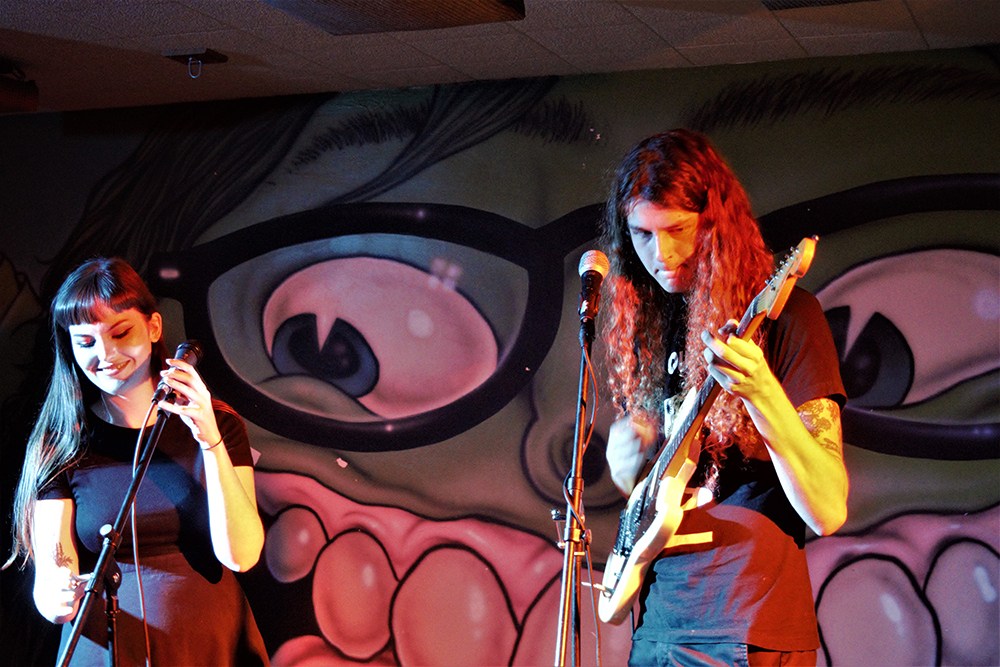 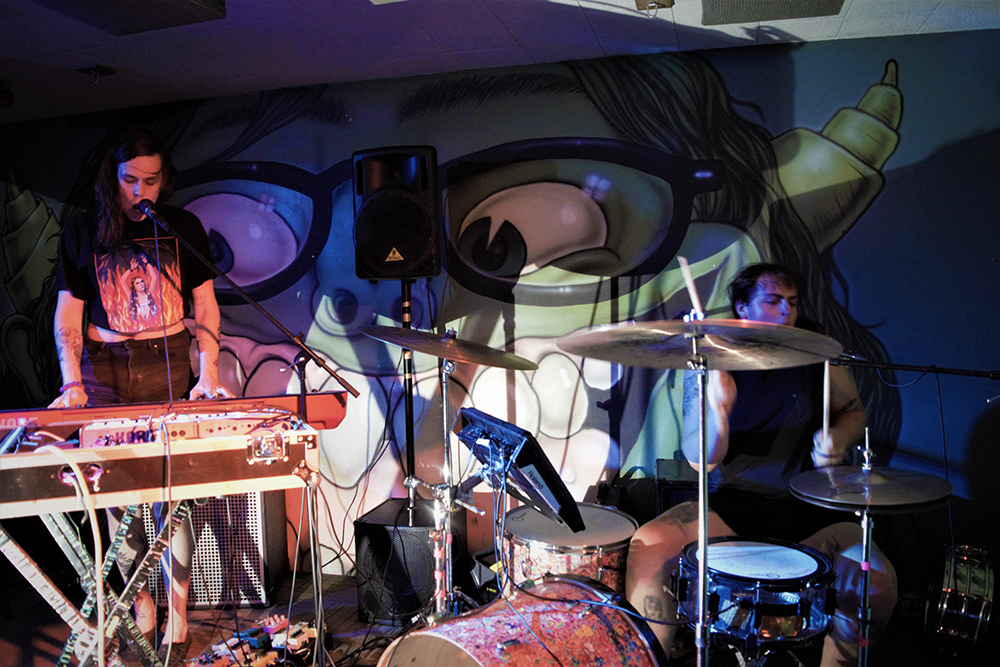 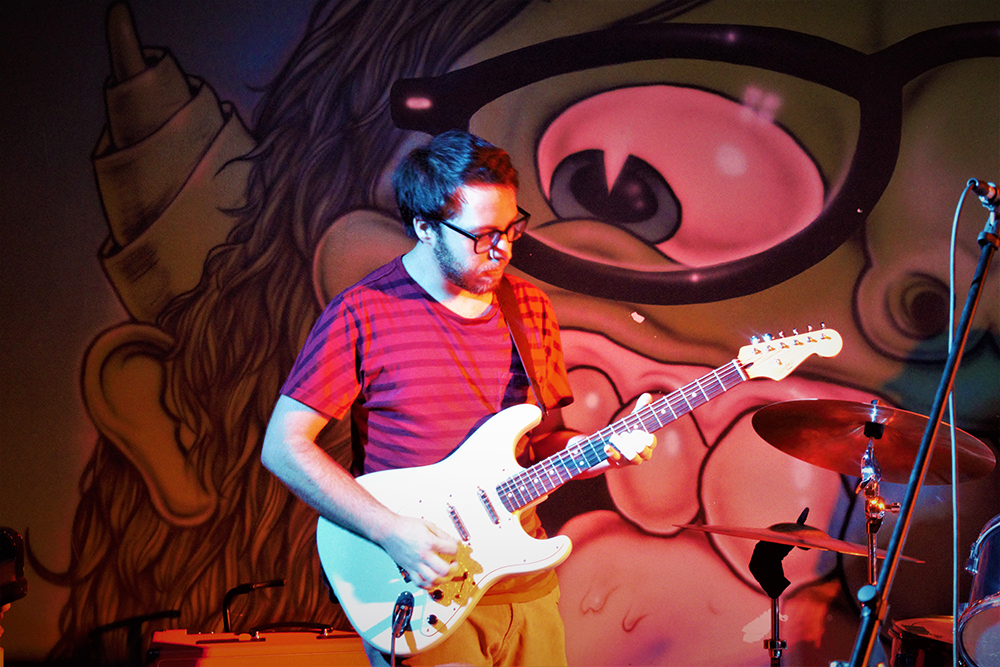