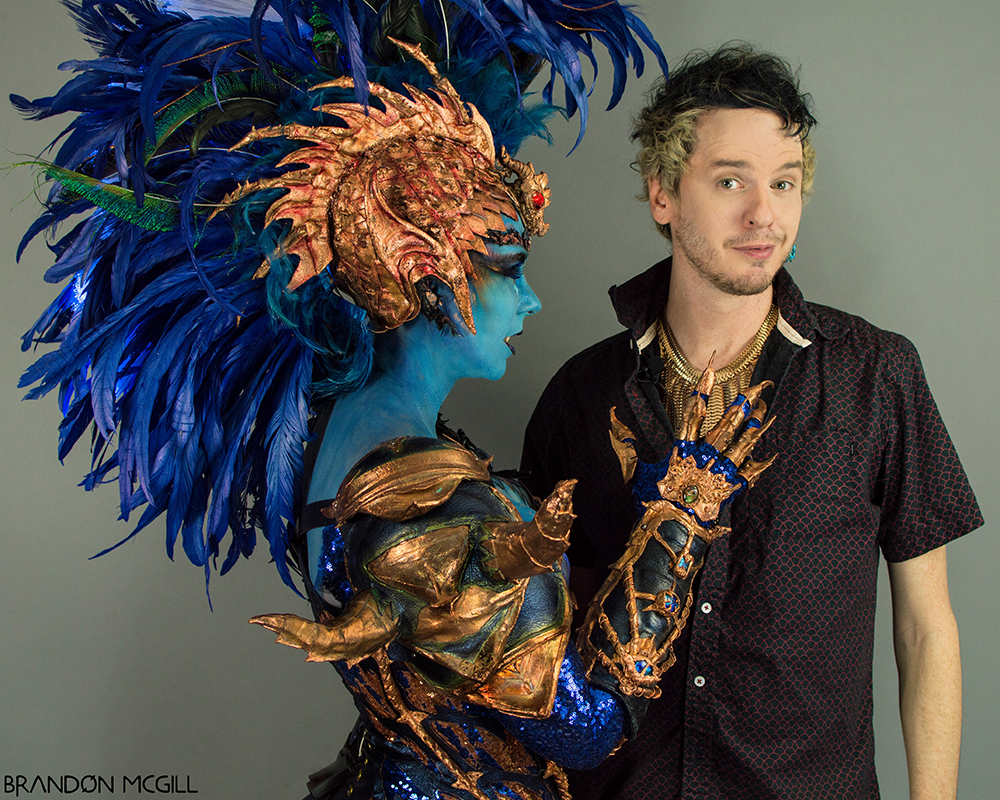 Now, I’ve been following the work of Brandon McGill online for several years so I was eager for the opportunity to explore his studio and learn more about the artist as I knocked with vigor on the wrong door in downtown Phoenix. Five minutes later, re-situated a few townhouses down, a tall and slender form threw open the correct door to reveal a black and white duochrome vision complete with black feather shrug.

Brandon McGill is more than just awkwardly cool with his rumpled chic and talent for pulling off some truly powerful statement necklaces. And, in my not-quite-humble opinion, he’s more than an artist with a vision: Brandon McGill is on a mission. If any artist is ready to destigmatize nudity in a fun and an empowering way, I’m placing my bets on the man in the raven feathers.

I toured his downtown studio and had the chance to chat with him about his journey to bodypainting, projects past and present, what it means to be an artist in the 21st Century and more over the course of one overly warm morning and two cups of coffee.

Now, over the centuries, humans have implemented a wide variety of tools to aid in their artistic pursuits. From charcoal mixed with the animal fat on cave walls to Andres Serrano’s bold use of bodily fluids, people have a long history of looking beyond the brush and canvas when striving to achieve their creative vision. For Phoenix artist Brandon McGill, it’s all about the skin. 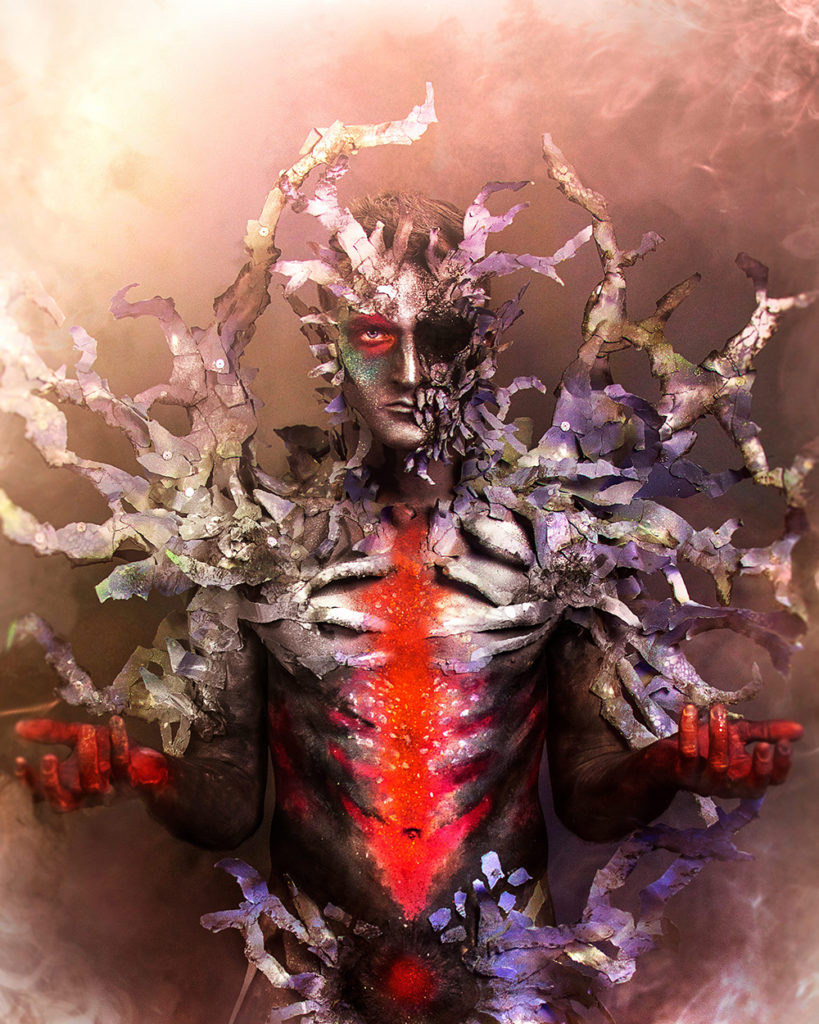 Brandon might be called a non-traditional artist for any one of a plethora of reasons beginning the path that led him to the life of a full time artist. While McGill considers himself a creative person, it wasn’t his impetus to pursue “the arts” as a profession. Rather, in his commitment to mental wellbeing, he approached art as a hobbyist seeking creative outlet and ended up with some rad wall art in the process.

It wasn’t until a friend suggested Brandon swap canvas for skin that a passion for bodypainting was born. Three body paintings and one shower drained clogged with acrylic paint later and Brandon had found his format; if maybe his process still needed a bit further refinement. Happenstance led him to his profession and, reflecting upon it, Brandon remarked that he is “amazed at how small, seemingly inconsequential decisions shape your life.”

Art became his passion. And, I feel like this is good time to address the passion part, since you’re all probably wondering about it anyway. Bodypainting is not a sexual thing. Sure, it can be a sexually empowering experience for some people, but maybe that’s just because anytime an individual feels powerful, especially naked and powerful, there’s something a little sexy about it. But immediately equating nakedness with sex or anything taboo? Brandon wants to change all that. And he’ll be the first to tell you, “[it] makes me uncomfortable when people objectify my models or make them uncomfortable in any way.”

So don’t make it weird.

McGill strives to destigmatize nudity by helping people feel comfortable getting naked and then covering them in layers of paint and maybe feathers or talons or sequins or flowers. He engages in conversation with his interactive canvases, learns about them, involves them in the creative process as it unfolds, and, when all is said and done, he photographs the results.

And that is what made me first want to dive deeper into Brandon McGill’s artistic process. For me as a writer, the act of creating art is a very private thing; not to be shared with others until reviewed and certainly not something I want other people chiming in on while I’m working. From my perspective, Brandon comes at art from the opposite end of the spectrum.

He works with his models. He draws something out of them that hides inside and pins it to the surface with paint. As I walked up the stairs to his studio space where he re-envisions and photographs his subjects, I noticed the walls are covered in portraits. Gods and monsters. Forest nymphs and water sprites. Characters from myths and fairy tales. Figures meant to inspire fear or awe or wonder. 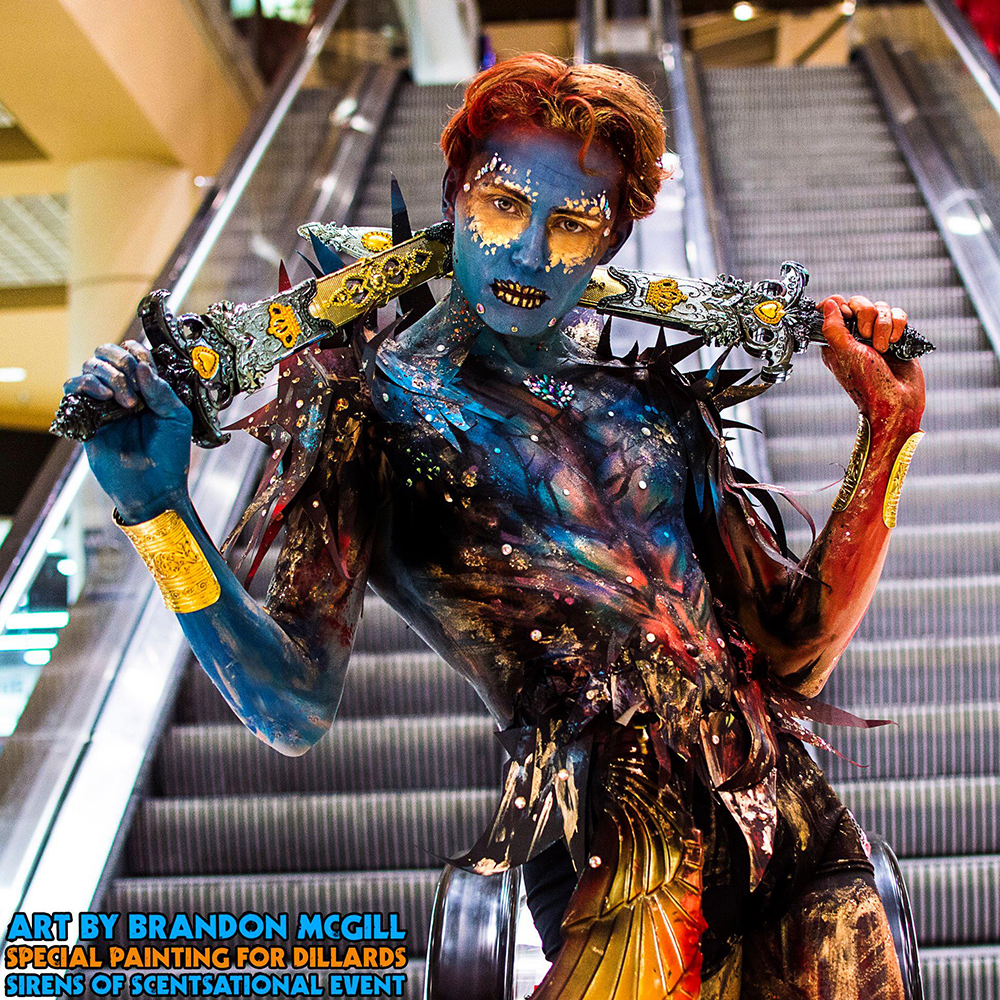 Brandon’s bodypainting skills, and the resultant photography from these transformative sessions, quickly established him as one of Phoenix’s most innovative artists. And McGill’s creativity expands beyond the “canvas”. He’s applied his unique skill set to a wide variety of projects, from music videos to film to even a live painting session at a shopping mall. Yep, right in front of Dillard’s, folks.

He’s released several collections of his work as books, including Gods and Monsters and Fairy Tales, and supports an active Patreon fanbase that requires regular feedings. Brandon is quite modern in his approach to the industry side of art. That can mean a lot of different things, but in Brandon’s case, we’re going to focus on three. First, he feels that a healthy relationship with PR (or Public Relations, for those still learning the lingo) is crucial for artists.

Second, he understands that, “Facebook informs art.” Or, as he initially put it, “Cleavage informs art.” Facebook, and other online platforms, have a direct impact on the way artists present their work to audiences (and what work audiences actually see on these online forums). If you have doubts, consider the aforementioned cleavage. Brandon’s work featuring female models is more likely to be flagged as inappropriate or denied the “boost this post” option. That can have an impact on what work an artist chooses to present or push in the public realm. And, frankly, that sucks.

But Brandon isn’t letting the Internet or any 21st Century conundrum keep him from achieving new goals artistically and his client list continues to grow.

As I wandered the stairwell and studio covered in portraits, I was struck by the ever-expanding body diversity. Brandon explained that when he first started body painting, his friends were his most frequent models, but as his popularity grew, his portfolio expanded. 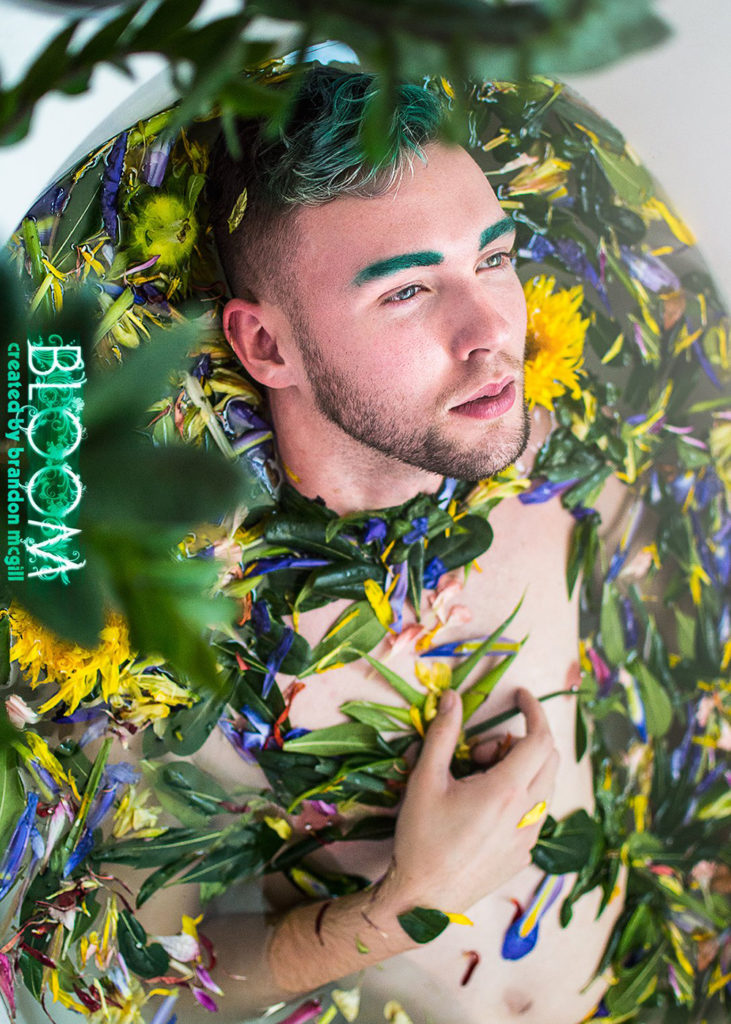 Some of his living canvases are actual, professional models. Some are normies exploring their own physical sense of self and some are just proud of their bodies (or want to be). Truth is, each person probably has their own set of reasons for stripping down and Brandon has the magic power to reveal inner beauty by pulling up that thing lurking just below the surface.

With a Patreon built to more than 200 followers, and some fees attached for the experience of body painting, Brandon was able to transition to his artwork full-time.

So, yes, Brandon charges for his services as a body artist and, once the body-painting is complete, he photographs his subjects so the portrait remains long after the paint gets washed down the drain. And, while my lawyer advises me not to identify him as a therapist, Brandon’s immersive process can prove therapeutic. His clients include a scientist who flies to Phoenix twice a year to drop by Brandon’s studio and a couple who documented their relationship with annual body painting and photography sessions, even through their breakup.

Brandon’s been hired for club events and music videos (like this one from Fairy Bones and this one from Captain Squeegee) and now he’s added a film to his résumé.  For his latest collection, Bloom, McGill takes a vulnerable turn.

Rather than presenting models in layers of paint, the subjects are stripped bare of the usual adornments we’ve seen in Brandon’s work and are, instead, adorned in botanical arrangements. Makeup is added, but more as an accent and not so much as might be considered a mask.

Bloom is just one of many tasks lined up on McGill’s to-do list right now. So, to make sure you keeping up with all of Brandon’s ever-changing sea of creativity, you should probably follow along with him through with that like/follow. Or, my preferred choice, sign up for the Patreon to score exclusive content from Brandon McGill, including access to his video series, “Let’s Make a Mess”.

The further you delve into the wondrous imagery that emerges from the mind of Brandon McGill (and the models who participate in that creative process) the more colorful your world will become. 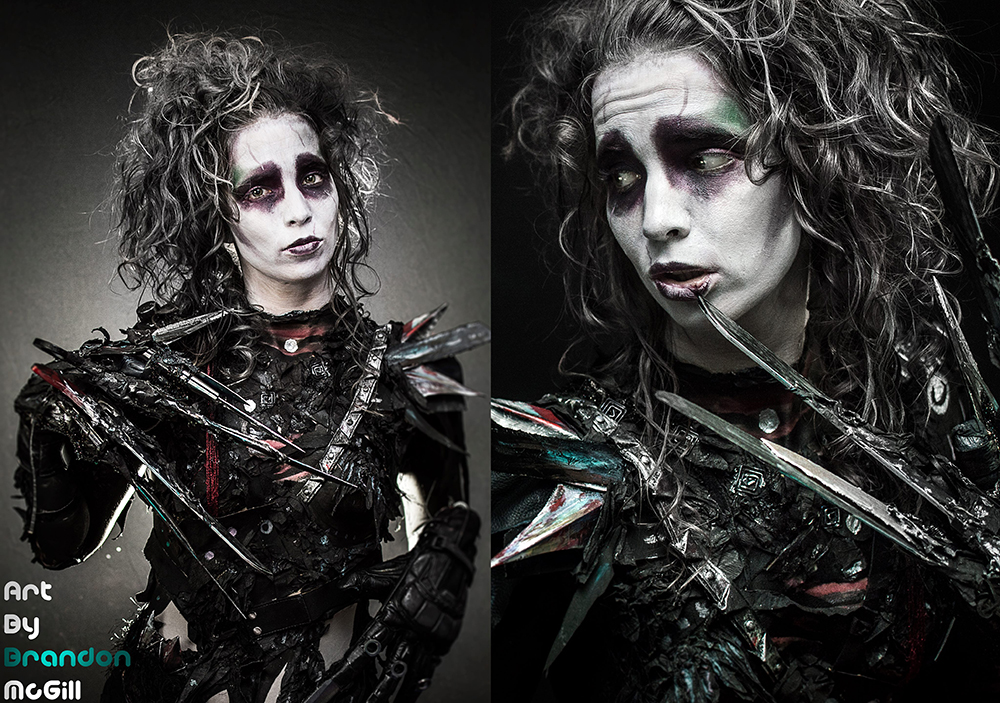 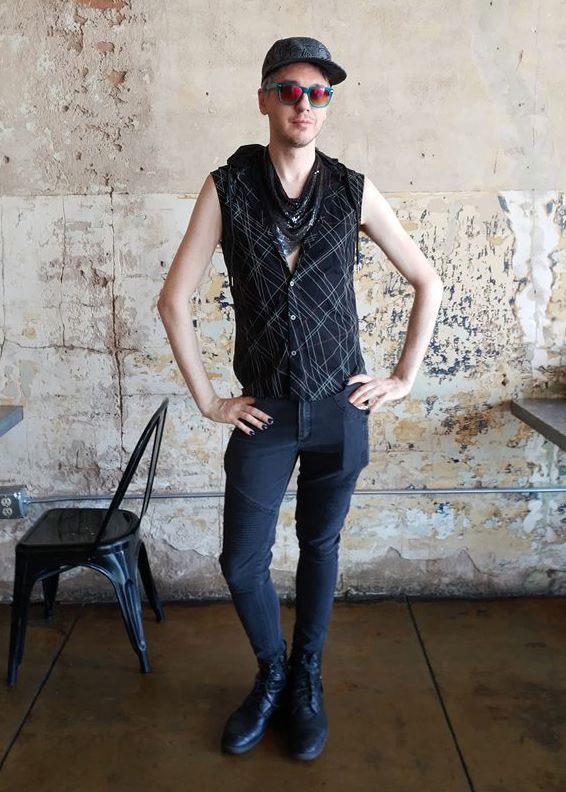