Golden Boots have been a band for 15 years.

Think about that. What were you doing 15 years ago? Half of you probably were not playing in the same band as you are now and the other half of you weren’t even double digits yet. Meanwhile, Golden Boots has trenched on. As their Bandcamp states, “Golden Boots That’s us. Come hell or hi water we will be Golden Boots.” And I believe ’em.

Tucson’s Babytooth recently issued the band’s tenth release, As You Remember Them, and it’s a prime example of that city’s lofi alternative pop sounds, although Golden Boots might prefer the terms “crumbly western” or “alt-alt-country”, which I just love.

Beginning with the uptempo “Clones and Drones”, the album quickly progresses to “Psychological Strength” showcasing the strong dynamic of songwriting As You Remember Them contains throughout. Experimental, freeform, rocknroll — all of these genres and more are covered and they transition into them well. There are also a couple of covers on the album, one I did know, “Moody Blue” by Elvis, and one I didn’t, “Purify”, from former Tucson band “Barely Bipedal”. I feel both do a good job of highlighting two unique aspects of Golden Boots’ influences and definitely recommended checking them out.

Mark Anderson: First off, a little background info please if you don’t mind. I noticed a couple of the releases on your Bandcamp page are 10+ years old. How long has Golden Boots been around? Have you always been based out of Tucson and have members changed throughout the years? Who besides yourself is currently in the band?

Dimitri Manos: Golden Boots was started around 2002 in Tucson and we’ve been based here ever since. The band started as Ryen Eggleston and myself, over the years MANY friends have been members of the band and/or collaborated with us. 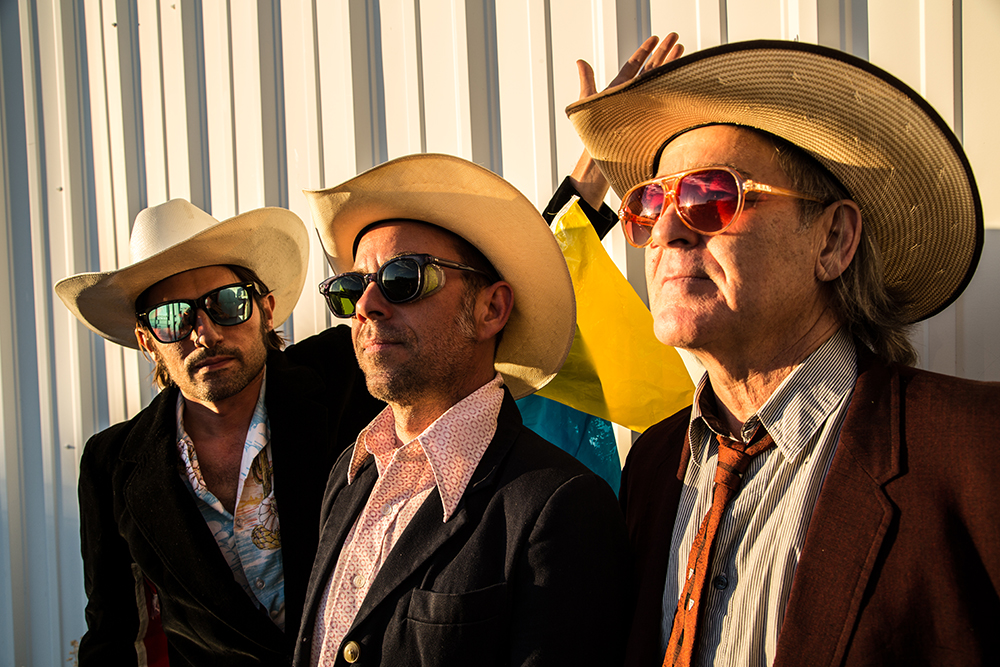 Who besides yourself is currently in the band?

I love how both you and Ryen play the omnichord and how it’s featured throughout the album. For those unfamiliar, could you please describe that instrument? How did that become a part of the Golden Boots sound?

Omnichord is an electronic version of an autoharp plus it has drum beats. We added the omnichord for the trio version of Golden Boots with Ryen, tidypaws and myself. We recorded the last two records in this trio formation (H.A.L.T. on Burger Records/Baby Tooth Records and As You Remember Them on Baby Tooth Records) plus toured around Arizona in that formation and did a Germany/France tour with Phoenix band Gene Tripp (we also played in that band).

Although this album has 10 tracks on it, you list it as an EP. Is that because of the total length I take it? When listening to it in its entirety it seems like a full album so I’m just curious…

We needed to have an EP for a European tour we did in June, so we recorded this EP, but ended up with more songs than we expected ????

Yeah, pretty much. My “home studio” is called Skull Mountain and that’s where I do all the American Monoxide stuff, there’s a space Boots record in called “I-10 Whatever” but for this EP I recorded it at Mt. Skull… so we wrote it just to differentiate it for ourselves in the future to remember where we did it.

I noticed that this album is mixed by Jim Waters at Waterworks and it seems you’ve worked with him numerous times in the past. How did you link up with him? I mean, if you live in Tucson and have the option of working with him, you might as well right??

We’ve worked with Jim in various projects over the years, and he’s mixed and/or mastered the last two Boots albums, the last three American Monoxide records and the Haboob album (Ryen and tidypaws’ project)… plus he’s great to work with. No brainer for us ????????

How about the cats from Baby Tooth who have released this album on cassette. How did that partnership come about? It looks like they’ve released a couple albums by Golden Boots and American Monoxide so clearly the partnership is not brand new…

Baby Tooth Records has been releasing A LOT of music over the last few years with tons of variety. I approached them about releasing some music and now we’ve worked together on 5 or 6 releases and I totally recommend checking out their Bandcamp to hear the great variety of Arizona music. Plus, they got an awesome record shop “Wooden Tooth” in downtown Tucson. 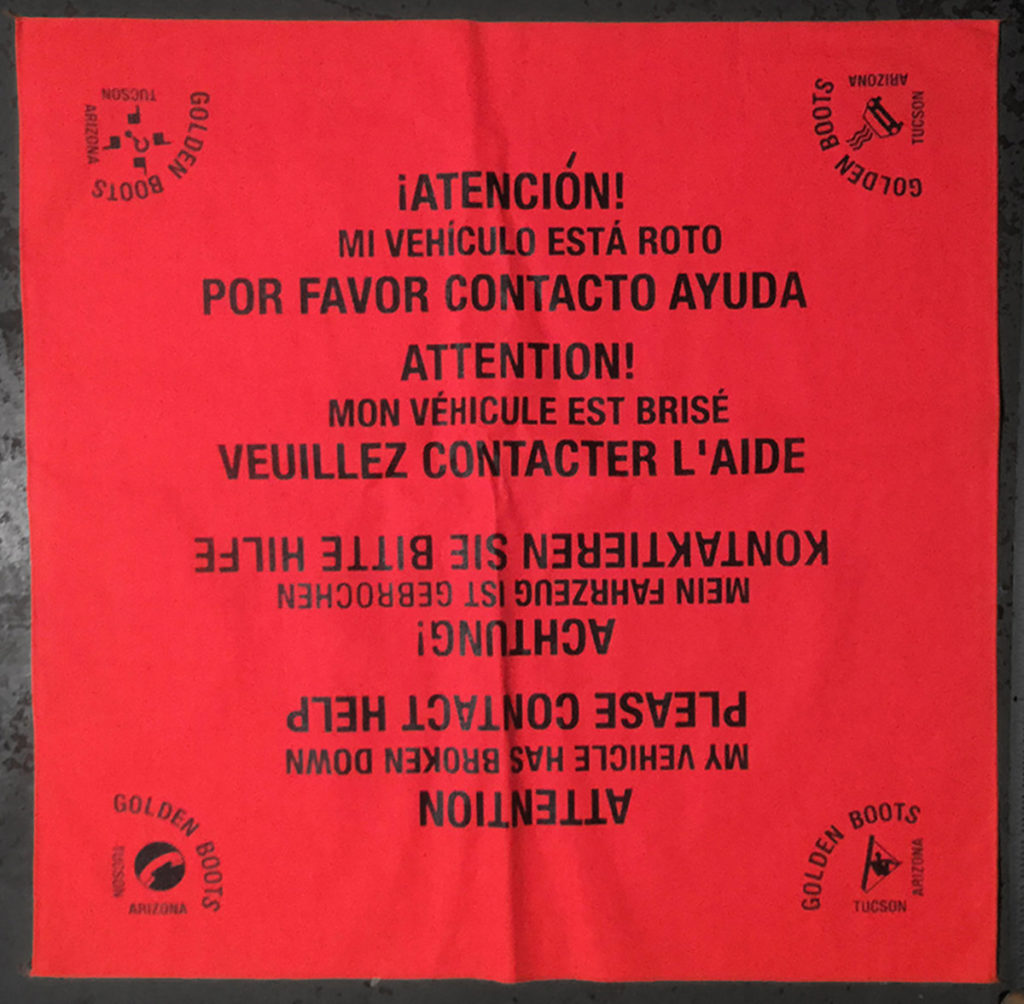 I love the “Emergency Cloth” that comes with downloading the digital album on Bandcamp. Was this your idea? It looks like you may have done other giveaways like this in the past as well. Could you highlight some of the others?

I like the idea of including something physical with something digital. The “Emergency Cloth” was a new Boots idea that we could bring overseas (it’s in 4 languages????). We’ve done a few non-traditional releases over the years, many of the past ideas were cooked up by Mike Dixon from People In A Position To Know Records (Tucson based label by way of Olympia, WA). He thought of our paint by number records, songs lathe cut onto plastic picnic plates, songs lathe cut on to x-rays from a veterinary clinic, Golden Boots hot sauce, etc. This one I thought of because I found a bunch of blank neon orange cloth squares at a fabric remnants store.

Finally, what’s upcoming for Golden Boots? Any shows or tours in the works? Are you always working on new material?

Playing around AZ ands CA this summer, plan to head back to Europe this fall. Recording a new full band album and also an instrumental album as well.

Catch Golden Boots this Saturday, August 11 at the Trunk Space or catch ’em the next day back in Tucson when they open for Poster Childern along with Freezing Hands and Lenguas Largas at Cans Deli! You could also take a vacay out to Palm Springs towards the end of the month when Golden Boots plays the Ace Hotel & Swim Club on Thursday, August 23. 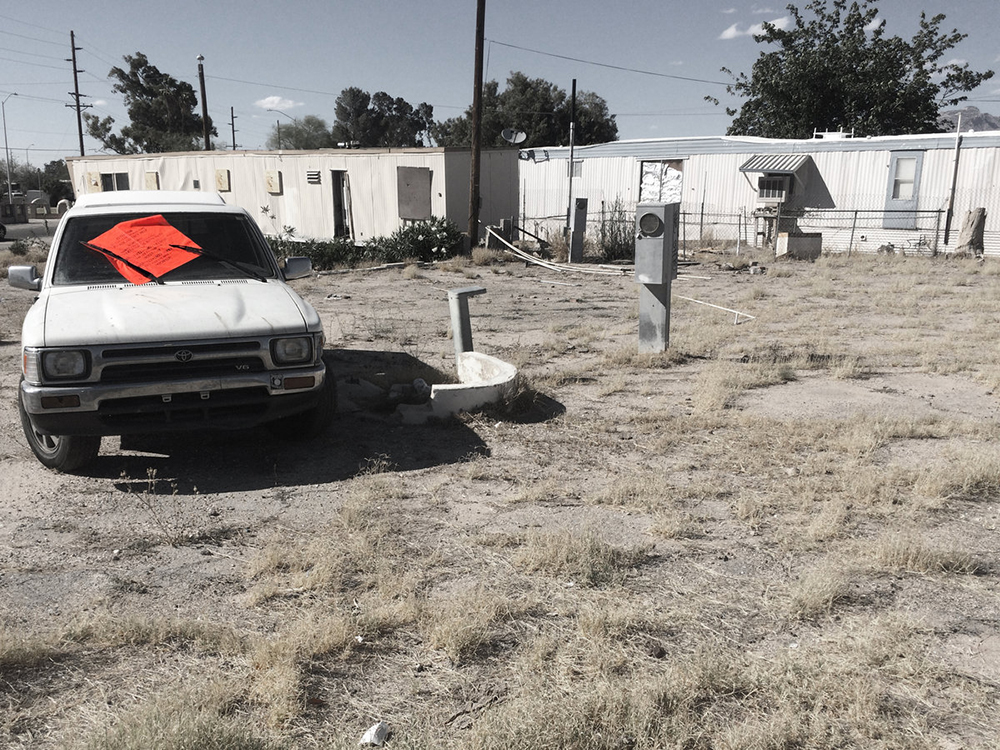