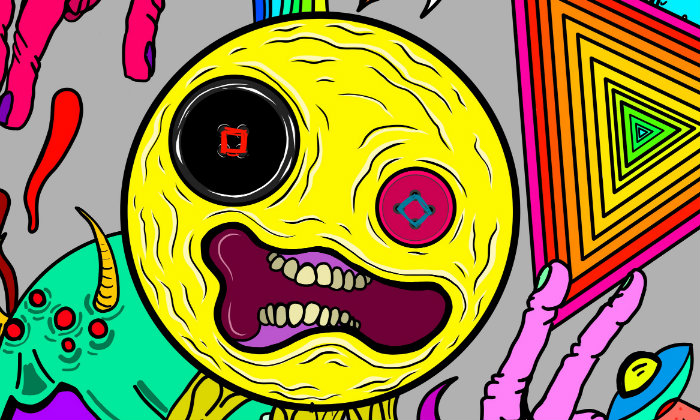 The distinctive candy grunge sound of Phoenix’s Foresteater will start to lift you out of those summer doldrums. Until, that is, the lyrics sink in. Whether dealing with some weighty topics like drug abuse or the frazzling anxieties of one’s own headspace, Foresteater charges forward in brightly colored sonic waves and a voice from Mikey Pro that borders on whimsical. “Unbutton” reminded me more of the Imaginarium of Doctor Parnassus than your run-o-the-mill indie pop number. Bob Hoag of Flying Blanket Studios, who recorded the track, is known for his ability to polish up that pop shine. The veneer is a nice addition to Foresteater’s psych pop style. Make sure you check out “Unbutton” and follow Foresteater on your preferred platform for more singles (and music videos)!

There’s an easy going air that wafts through “Surfrider” from The Jolly Llamas, but the song actually tells a torrid tale of murder and shark attacks. Funk and surf co-mingle with some modern indie for a Cali-fresh sound straight out of Santa Cruz. This track marks the second single from The Jolly Llamas’ sophomore release, Llama Star, which came out last month. Dive into relaxing beach indie sound of The Jolly Llamas whether you start with “Surfrider” below or head straight to Llama Star Soundcloud over on .

Hey, maybe you caught this song our radio show a couple weeks back? Well, if you missed it then, you don’t have to totally miss out on this lively new number from Logan Greene. “Cool Ways to Die” is less of a downer than you might expect. In fact, it just might be the bad mood antidote you need this August. (For those outside of Arizona, seasonal depression works opposite here.) “Cools Ways to Die” is dark and fun which is my favorite indie pop mix. This track comes to us from Logan Greene’s June release, Medium Place, which you should check out in its full splendor. Or you can start with “Cool Ways to Die” below…

Combining psych-garage-rock and yacht rock (yep) for their own fun sound, this four-piece from Philly are ready to release their sophomore effort this month. “Patiently 4 U” comes to us from that new album with some real summery vibes and a casual air that made for flip-flopping about the pool’s cook deck. The release of Ceramic Animal’s new album, The Horse, will kick off a nation-wide tour (with a stop at Valley Bar in Phoenix on 9/11) so make sure you get this band on your radar now… if you haven’t already. Word is, they put on a helluva show.

The Helsinki band Pastis takes the energy level up for lively summer single, “On the Run”. This track is the B-side for another fun number, “Amazon”, and the two-song release marks the band’s first on the the Stupido Records label. Turn up the volume for this one and let the bright waves of rocknroll shake you loose. There’s a carefree attitude in the instrumentation that sings to me of school-free summers and driving around with friends for endless hours to avoid being home with parents and siblings, without leaving range of the air conditioning. Trust us, Finland, it’s a Phoenix thing.