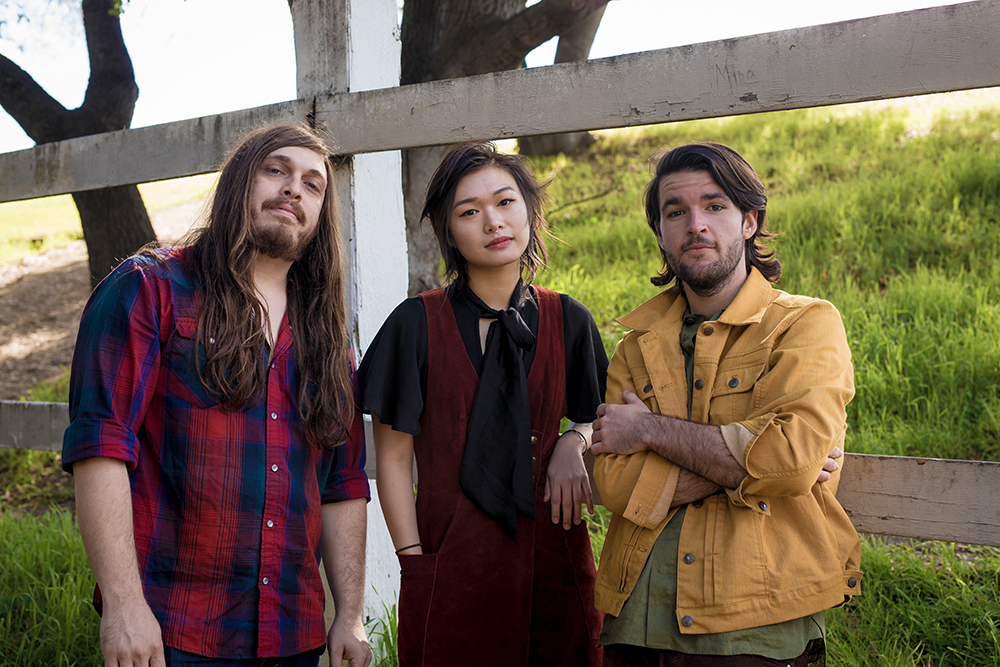 Yvette Young occupies a nearly uninhabited realm in the guitar playing universe. She does things on the instrument which require a tremendous amount of skill, but an even higher degree of creativity. She is one of the rare instances where virtuosity, musicality, and originality coincide. Her band, Covet, plays some of the most intricately beautiful math/post rock you can find.

I had a conversation with Yvette before their show tonight at The Rebel Lounge.

Jacob: You approach the guitar in a really unique way. What made you look at the guitar and decide to take a tapping, pianistic approach to the instrument?

Yvette: I started on classical piano, so that definitely influenced how I view the instrument. My favorite reference for writing is always piano. There’s a right hand and left hand, and there is polyphony going on. For me, the upper strings [on a guitar] are kind of my right hand, and the lower strings are my left hand. The two handed tapping thing–the percussive way of playing–that’s how I play the piano pretty much.

Do you ever write guitar riffs, or music for guitar, on piano?

You often end measures, or musical phrases, with quick 16th note, or 16th note triplet, licks. Is this incidental or is it a purposeful motif?

I guess it is just something I like. It’s something I gravitate towards because I like it. I use it on piano as well, but I don’t think it’s really a specific piano thing.

When you bring a riff or a piece of music to David [bass] and Forrest [drums], what kind of conversations do you have about parts? Because the music you’re giving them is so complex and potentially overwhelming.

Our conversations are all sitting and thinking things out. When I write I don’t think about time signature, I know that seems pretty ridiculous because all of our stuff is compound meter. But I actually don’t really think about it, or take it into consideration much until I bring it to drums.  Then I’m like, “OK, so this is actually a bar of 7. Or you can view it as 3 bars of 4, but I view it as a bar of 7 and a bar of 5.”

So it’s all about phrasing, and those are the sorts of conversations we really have. How to really read a certain section, then how to play the part that is the most effective for it.

Moving to a different subject, do you find people try and diminish your talent or accomplishments specifically because you’re a female guitarist.

People will usually say stuff like, “You’re so lucky you’re a girl because people see you, they click on you, and they are curious about you. So it’s easier to get noticed and you get more attention then a guy doing the same thing in his bedroom.”

I can’t argue that. It is the nature of being a girl in a niche genre. But I will say it is a double edged sword. You get more noticed, but I think to get actual respect is way more difficult. I’ve had guys literally tell me, “I watched your video thinking you would suck, but then I finished it and realized you were actually pretty good.” It’s supposed to be a compliment, but it is a backhanded compliment, because why is the preconception that a girl doing this would suck?

But it’s there. As much as I want to argue it, it is there for some reason. It’s just like innate sexism is a thing that is still present. I don’t really mind it too much because to me, I get this opportunity to prove people wrong and I also get to just…break the stereotype.

You already touched upon this, but it is strange people would say the only reason you’re getting noticed is because of your gender when only one or two other people in the world are doing anything remotely comparable to what you’re doing in terms of skill and musicianship.

I think a lot of people feel threatened. I’m not here to take anyone’s career from them or anything. I’d like to live in a world where everyone coexists. The beautiful thing about art is we can be collaborative with it and you can support each other with it. So I don’t like to be in that competitive mindset.

It would be a really lonely scene if everyone was out to compare themselves with each other. Or out to attribute someone’s success to looks or something. I think it is part of human nature to find a reason why someone else is doing better than you.

Do you have any advice for younger female musicians who might be facing similar criticism or adversity?

One of the biggest struggles I had starting out was my identity and stuff. I thought I was secure with myself. And then I was thrust into this world where everyone picked me apart in comments. Down to my appearance, even my nose ring, the way I dress, they were even talking about my body–tearing down parts of my body even though it’s a video of me playing guitar.

It’s really disheartening, because it’s like “Wow. I thought I was fine and now everyone has an opinion about me.” It really does feel like a bunch of vultures just circling and picking me apart.

At first I tried to curate myself to their tastes and their preferences. I even stopped posting pictures of myself because I felt guilty. I thought people would say, “Oh, you’re just using pictures of yourself to get attention.”

More recently I realized reading all of that shit is so unhealthy. You should make art for yourself. Even if no one ever heard any of the stuff you ever created, you should just do it because it makes you happy. That’s the whole reason I started playing guitar and making music in the first place. It makes me happy, nothing makes me feel more overjoyed, nothing makes me feel more powerful.

My advice would be don’t read the comments, even the good ones! They can subconsciously sway your artistic direction and your focus. Things can start getting clouded by what other people are saying. I think you should stay focused on your own vision and what you like doing. You don’t need to justify any artistic decision to anyone but yourself, and the only reason you need [to justify it] is because you like it and it works.

So, yeah, tune out all the haters and all the noise. Do things because it makes you happy. If you want to dress a certain way or post something just do it. There will always be people who support you and those are the people who are there for the long run. Then the people who pick you apart because you do one thing they don’t like, they’re not a true fan anyway.

Your father is an accordion player, and obviously plays a different style of music than you, but I was curious if your shared musical identity has brought you two closer or helped you bond.

Well at first he was[…]telling me I wouldn’t succeed if I did this. I think he was saying it out of fear and and out of love. He was a musician as well, so he knew the music scene was pretty cutthroat and oversaturated and he knew it was hard to make it a career. I think more recently he’s understanding more and he’s been more involved in my musical life.

Along with being a guitarist you’re also an incredible visual artist. How does your painting and tattooing inform or inspire the music you make?

When I paint something I usually hear music behind it or I listen to music to enhance the experience of painting it. Everything I do is pretty detail oriented and that comes from my theme of escapism. I find escape in going into the detail and being sucked into a different world.

I want everything I do to tell a story or evoke some kind of emotion. Both [my music and art] are related in that they’re hyper detailed and deal with escapist themes. When I write a song I envision a story or I close my eyes and try to see something happening. So I think that is a very visual portion of me coming alive when I hear things.

I used to walk home from high school and listen to music on my iPod and imagine fake music videos for it and I still do that to some extent with my own music and then vice versa when I paint something.

Last question. What do you find beautiful about birds?

Catch Covet tonight, July 22, at The Rebel Lounge with Vasudeva and local support Holy Fawn. Doors are at 7:00 PM with the show at 8. You can buy tickets through Ticketfly.