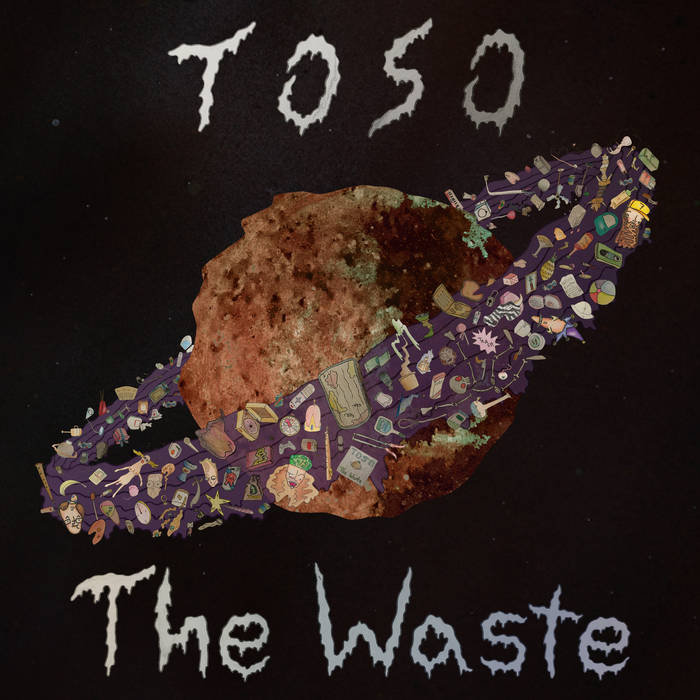 I will be the first to admit it took me longer than I expected to review TOSO’s most recent contribution to their world-building concept, The Waste.

After experiencing their album release show earlier in April, it almost feels unfair to try and compile their entire existential ethos into one measly review of their new release. The self-described “art-rock” installation inhabited by Evan Dorney, Marc Ellis, Eric Ellis, and Zac White combines elements from metal, punk, noise, and what I feel is “dad rock,” but more importantly, it showcases performers who refuse to be traditionally jaded in pace and image.

The Waste is not only the spiritual successor to their recent February 2018 album titled The Cleanse, but is the clear “point B” to the sounds and imagery they have worked hard to curate. Deep inside their insatiable lust for “rock art” emerges an aurally autobiographical heartsong; turn off the lights, pop some of your uncle’s sketchy heart medication, and prepare to enter what they call, The Waste.

In what I believe to be a nod to good ole-fashioned noise, The Waste begins with an ambient intro titled “Planet Dumpster.” While it doesn’t dive into the musical beef you’re going to devour later in the album until the late one-minute mark, the almost-five minute intro provides a soothing voice-over guiding us into the encroaching void of multiple genres. We are quickly introduced to Zac White’s flayed vocals conveying the emotions and sounds of what it must feel like to have your arm dipped into a deep fryer.

When “Ladydick & Manbitch” take on punk stylings with no hesitation, White’s voice knows exactly where to apply the cheese-grater to his vocal chords to produce some hysterical sound that held up impressively through the entire set when I first caught them. As I can now feel the assorted TOSO band members performing death rituals in my name, it can be safe to say that I mean this in the most complimentary way possible when tracks like “Psychole” are given distinct emotions because of his steadfast-yet-affected register. As I’m circumnavigating the album out of order, going back to the third track, “T.S.G.O.” reveals melodic, grunge-y harmonies that bring out a softer sound than before. The gentle instrumental riff guiding me through my stoney visage made me zone out for the rest of the duration until the vocals phased back in and I was no longer disassociating.

As we hopscotch to “Prestidigitation Nation” after discussing “Psychole,” TOSO begins speaking my language once again as I can envision them vocalizing through thick smoke with the unique diction vaguely reminding me of R.E.M. The guitar solo entering at the two-minute mark adds a simple restraint that makes the return of the vocal line even more smoother as we cruise through this strange jam-band universe. “Vortexistentialism” takes Zac White’s vocals to new heights paired with a lovely bass-like backup vocal that mixes just as well as Lionel Richie and Diana Ross, produced by Phil Spector in some acid-fever dream after they found out he murdered that actress and rocked that large white afro.

“Balthazar’s Wasteland” enters the scene with simple percussion evolving over a horizon of ambient tribal sounds. With an absence of traditional vocals or melody, the world-building concept I mentioned in the past is present in what I feel is the soundtrack to The Lion King if the characters had just a tad bit more existential anxiety and poor coping mechanisms. Even with the long length of the track, the pure tribal mix of emotions and natural sound were music to my ears which have trouble hearing high frequencies.

“Beach People” marks the first time in this review I didn’t have to squint at the screen trying to memorize the spelling of nouns I hadn’t encountered in the wild, beginning with a catchy riff and some fun, jazzy guitar improv in the back. As the song evolves into a punk hybrid of noise, the vocals, celebrated in pop punk fashion, lead into the last three songs of the saga.

“Who Cares” continues bright sounds among quirkily-paced lyrics, fitting the scene of a BBQ with plastic-bottled liquors pool-side. “Magic Boy Father” brings over early 00s folk, contemporary sensibilities, but also rounding out the psychedelic sounds found earlier in the album. In a sea of guitar solos and a sweet bassline, “Magic Boy Father” makes its mark as a possible live performance mainstay with the diverse vibes it delivers. A short romp titled “Before I Die” rounds out the sequel to The Cleanse, ending the album with similar pandemonium and a little more melody.

Listening to The Waste from beginning to end, or any TOSO material for that matter, forces you to throw out traditional narrative and absorb the unlikely combination of styles and absurdist lyrics, spoonfeeding you LSD like the MK Ultra experiments of yore. As much as I could continue to attempt humorous diatribes, The Waste is a poignant example of individuals who don’t let the absurdity get in the way of their serious intent. Among the costumes, characters and narratives reside a group of four honest human musicians who show no giggles with their careful composition.

This isn’t child’s play, this is The Waste.

For more TOSO, peep their rad website. Make sure to catch TOSO at The Rebel Lounge, Thursday, August 2 as they offer local support for ENJOY (Wyatt Shears of The Garden) along with Distractor. You can also witness the TOSO magic at the Endless Bummer 3 Pool Party at the Hotel San Carlos in downtown Phoenix with a score of other great bands on Saturday, August 4.