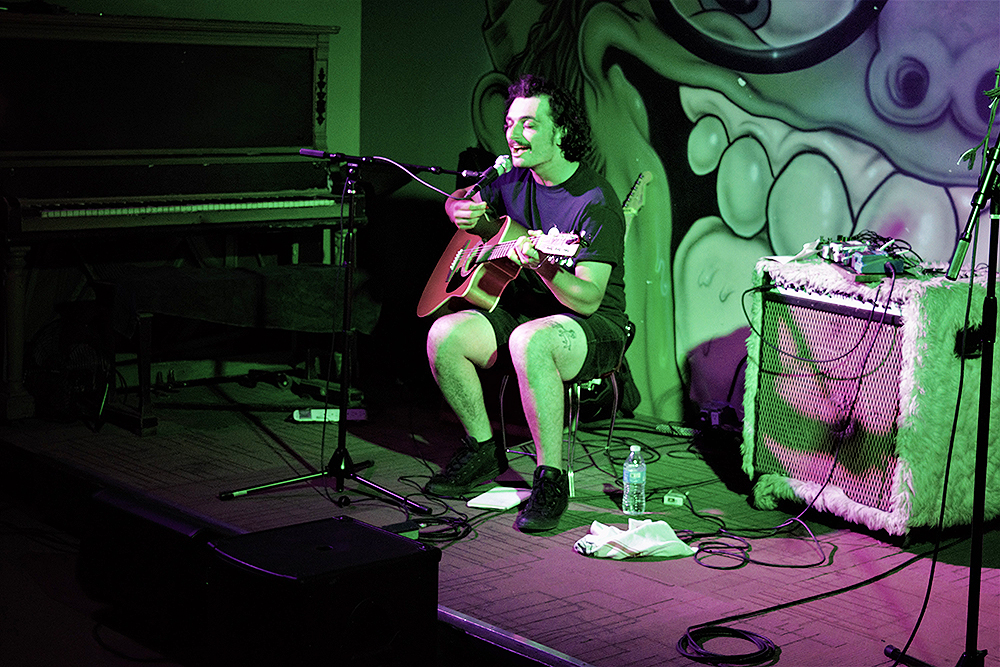 On June 23rd, 2018, six artists were slated to gather at the Trunk Space in Phoenix to play the “Summer Round Robin”.

Billed as an opportunity to show off their acoustic chops while consistently rotating between performers after each song, unfortunately, out of the line-up featuring Asa Martin, Matt DeCaro, Austin Antoine, Acne Superstar frontman Naveen Borojerdi, Sore Eyes, and Linecutters frontman Chuck Arock, changes were abound when Naveen brought the whole Acne Superstar gang along, while Sore Eyes and Chuck Arock were sadly absent.

In what was my plan of a normal event review practicing with my new camera and a night with friends, evolved into experiencing three out-of-state performers with nobody I knew in the crowd; this effectively created a pool of social anxiety around me which scared away even the most recognizable Facebook acquaintances which I’m sure they mistook for an aloof attitude. Will the crowd alienate me as I fail to make small conversation in what is perceived to be a “stick up my ass” but is really misplaced social anxiety? Let’s find out!

Beginning the night with East Coast emotional fervor, Matt DeCaro brought his Brooklyn brand of “mostly sad but kinda funny” storytelling elements to a small, yet attentive Arizona crowd. While also sharing that badge of honor as his album title, each track showcased the realistic daily routine and thought pattern of someone dealing with mental semi-functionality, but is constantly shorted one way or another by life.

While I was expecting typical lyrics of abstract angst, “Watch Cartoons and Fall Asleep” almost brought tangible tears to my eyes as I related to my own experiences with depression of wanting to “eat Chinese and fall asleep;” reflecting on my own methods for catharsis. “You can tell how happy I am by how I look when I’m naked” as a lyric pinpointed the feelings of fluctuating weight depending on the place we are mentally in our lives.

Matt’s set almost completely consisted of original tracks that were short in length but massive in intellectual bite. His lines were blunt as day in relation to grammar, but every track still managed to capture stories only Carole King and Stephen Sondheim would rival in transparent narrative. As if the Garfield comics came to life in the form of what looked like the lovechild of Freddie Mercury and Linda Lovelace, Matt DeCaro even had the ability to unironically plow through a stirring rendition of T-Pain’s “Buy U A Drank” without bringing himself to laughter. In the midst of the rapid fire jokes is the wailing gruff voice of Matt DeCaro’s soul demanding inner peace that his lyrics proved he deserves. In possibly one of the most relatable and heartwrenching sets of the night, Matt DeCaro embodied anyone in the room who felt they needed to cope with the truth of their lives through unending humor. 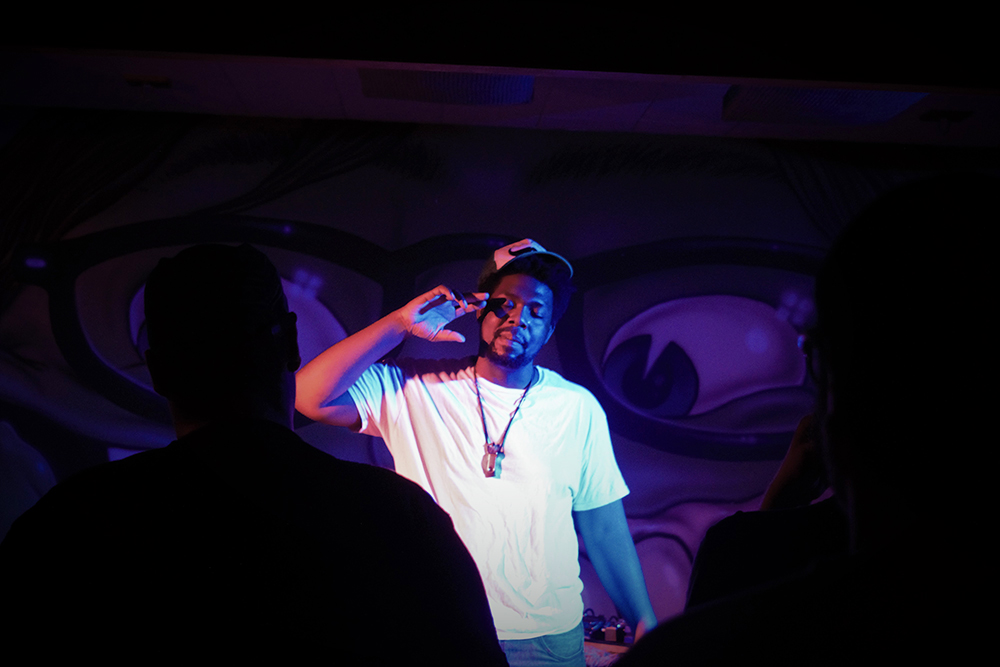 Austin Antoine was the second to take the stage sporting only a bluetooth speaker with Matt DeCaro firing off cues on a Macbook. As humble as a preacher, Austin’s calming energy and evident charisma featured in his opening freestyle brought the entirety of the crowd closer to the stage. An overtly minimalist stage design lacking even a microphone only highlighted his knack for making the most out of a little. Perfectly familiar and in-sync with his pre-recorded cues, Austin Antoine regaled the crowd with tidbits and anecdotes about his life before seamlessly transferring his energy into the next song. While Matt DeCaro’s set did feature emotional tones intertwined with humor, Austin’s style relied on his power of being the charismatic host and guide through his life instead of the court jester.

Aside from his existential diatribe featured in “No Doubt,” another facet of his talent was spotlit in a seminal cover of “Just Friends,” which displayed a steady singing voice in lieu of the rap we heard previously. With the honesty they both share in the lyrics they write and the integrity they put into their performance, there’s no question to why Austin Antoine and Matt DeCaro became friends. 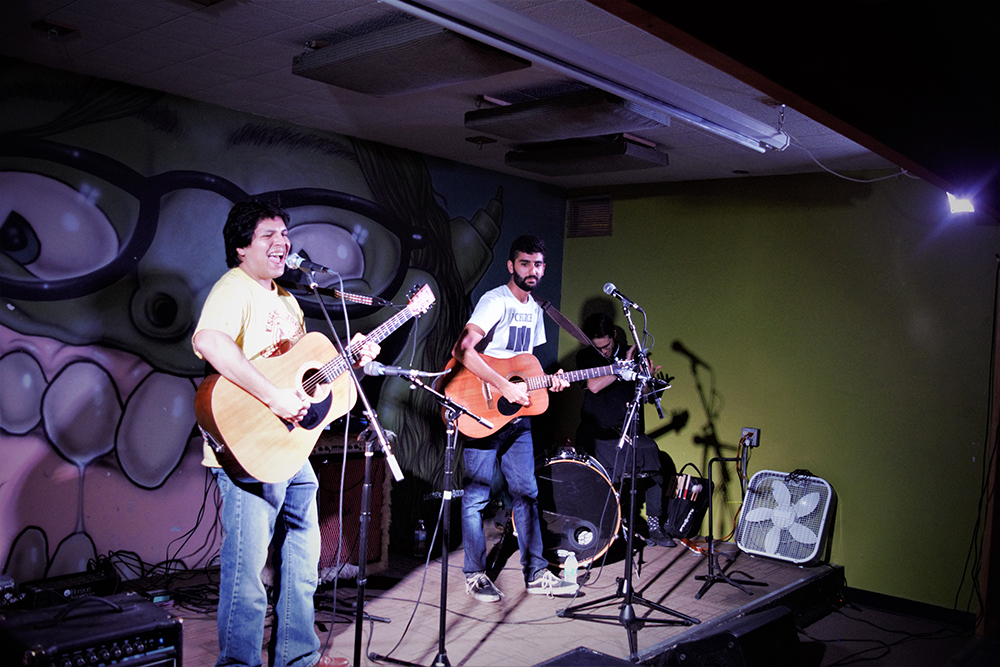 Next on the lineup in what was supposed to be a solo performance by Acne Superstar member Naveen Borojerdi ended up a complete acoustic ensemble which brought Jack Escobar, Ryan King, and Jake Smith in on the party. This not only marked the second time I’ve seen Acne Superstar, but it also counted as the third time I had to muster a professional opinion on a band I drunkenly remember off the clock at a house show during the first performance I caught. Instead of electric guitars, Naveen and Jack added a distinct indie-folk spin to their original pop punk tracks. As I heard their distinct pop punk elements through an acoustic guitar, it began to border other genres and surely gave them a catchier spin.

My favorite moments in their set were provided by drummer Jake Smith, who utilized a small percussion set-up and made the most of what he was given in this acoustic environment. His performance added a few more layers of sound and posed as one of the set highlights which carried the flow steadily. Another highlight was the handling of solos in an acoustic setting, with Naveen performing key parts in “Alien Girl” with melodic ease. My first semi-sober takeaway of Acne Superstar impressed me with their charm in a stripped-down environment, which still shined through without electric instruments. 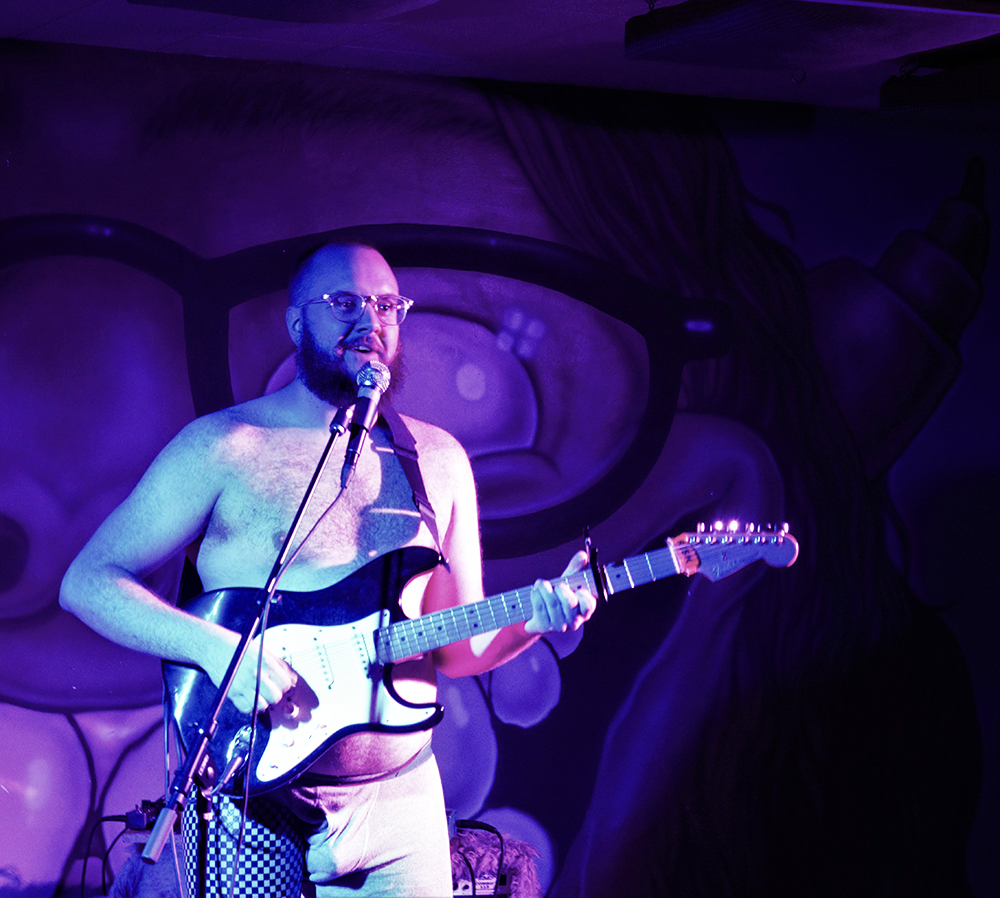 Asa Martin kicked off the last set of a relatively short night at The Trunk Space with an intimate — and I mean intimate — performance sporting only his intimates. The trademark of Asa Martin began with a speech reflecting his own journey of self-acceptance and ability to show off his body in every sense of the phrase. As he carried the most relative folk rock of styles to the stage when paired against the diverse styles of the first three acts, Asa salted his performance via electric guitar, then adding the pepper to his musical recipes through clever phrasing and calculated nouns. While his titles and online persona reflect an unassuming attitude, this humble nature was only one facet of an individual who showed clear care to the sound and execution of his lyrics.

Throughout most of the set, I felt incredibly awkward as I tried to get multiple angles of Asa without unintentionally focusing my gaze on the very obvious bulge which lurked beneath. But Logan, doesn’t it make it more awkward acknowledging its presence? The last thing I expected to photograph that night was a Hanes commercial, but I guess there’s a first time for everything. As surprisingly prude-ish as that statement came off, it could not overshadow the positivity and emotionally complicated concepts found in his deceptively diverse catalog. Unlike the humorous elements found in the former acts, Asa Martin rounded off the night with the brighter side of foreboding melancholy, telling his story without needing a diatribe or spoken word.

By the end of his set, the beating eyes of social anxiety I thought were upon me the whole time slipped away with the comfort of live music. While I missed my usual partners-in-crime, the Summer Round Robin provided a rare intimate comfort in the stark musical differences I found in each act unfamiliar to me. To anyone in the crowd I may have weirded out by existing: please don’t be afraid of me.

Intro about body positivity and stripping / Idiots and Lunatics
Tequila
Current Address
New Sunlight Two Suns Rise; One Neon Pink and One Neon Blue-After the First Ever House Show on an Exoplanet or Songs with Long Titles Seem Pretentious. (Remix) [Live]
APD
Ladybug (Original by Michael Alan Gill)
Wreck Me
Not For One Moment (unreleased) (but soon) 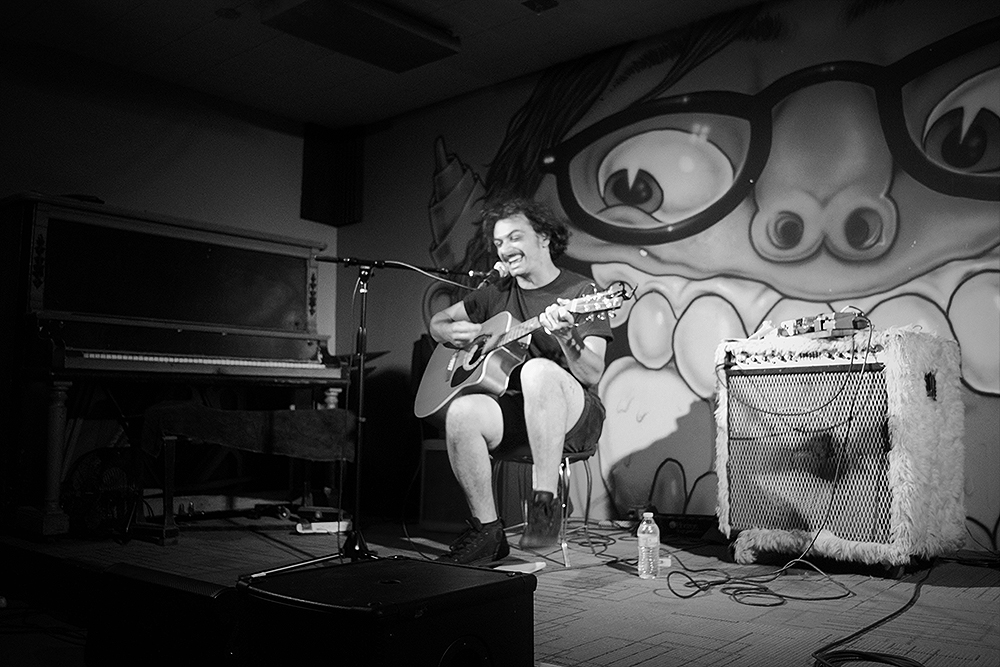 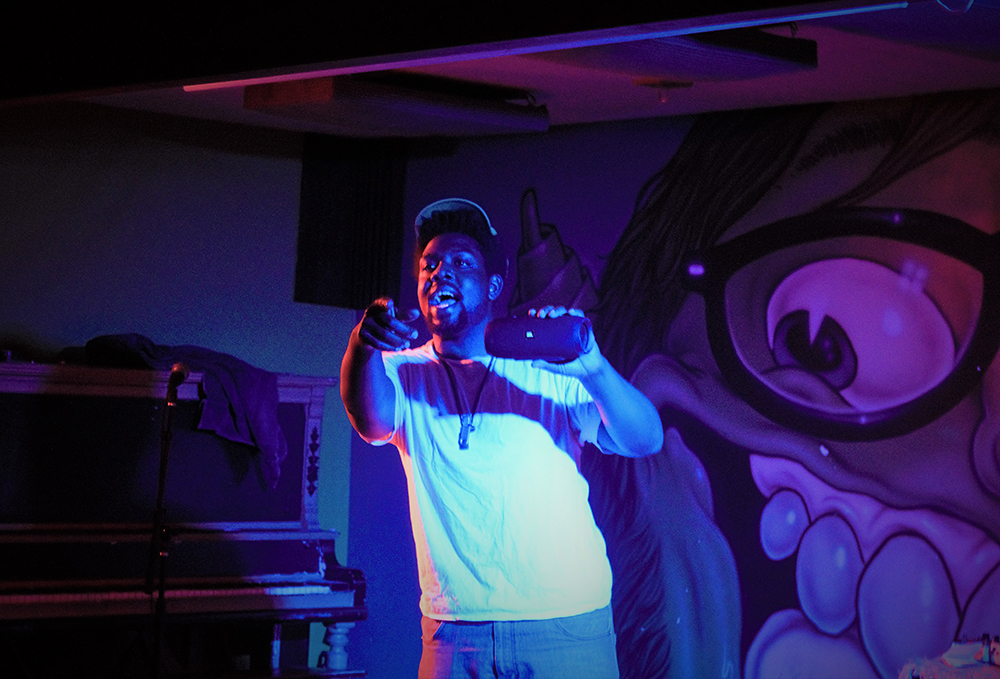 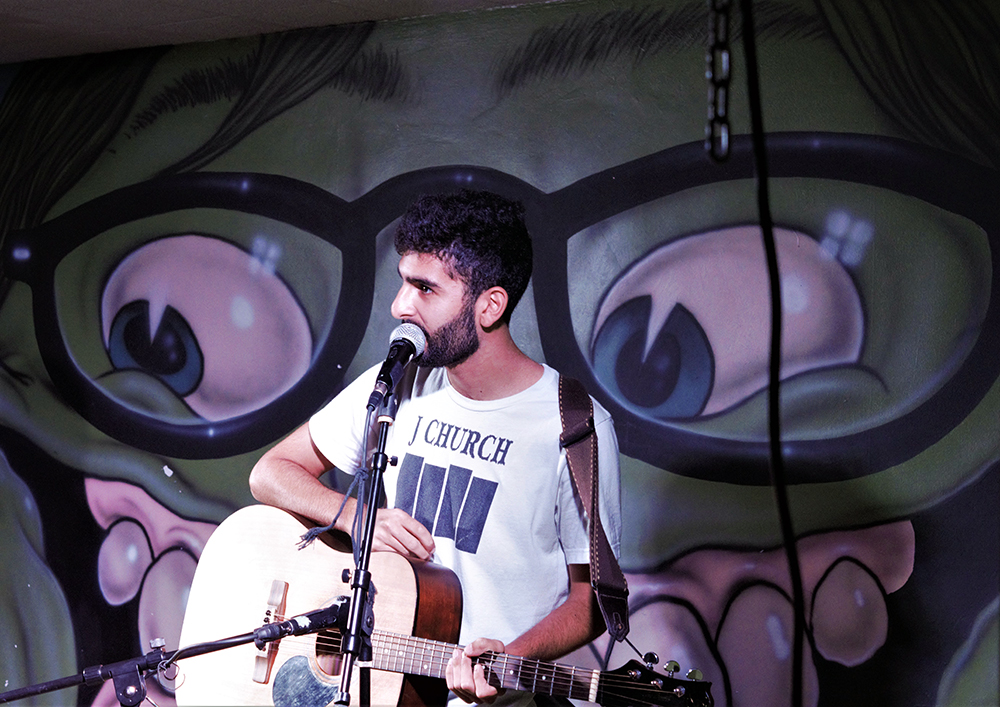 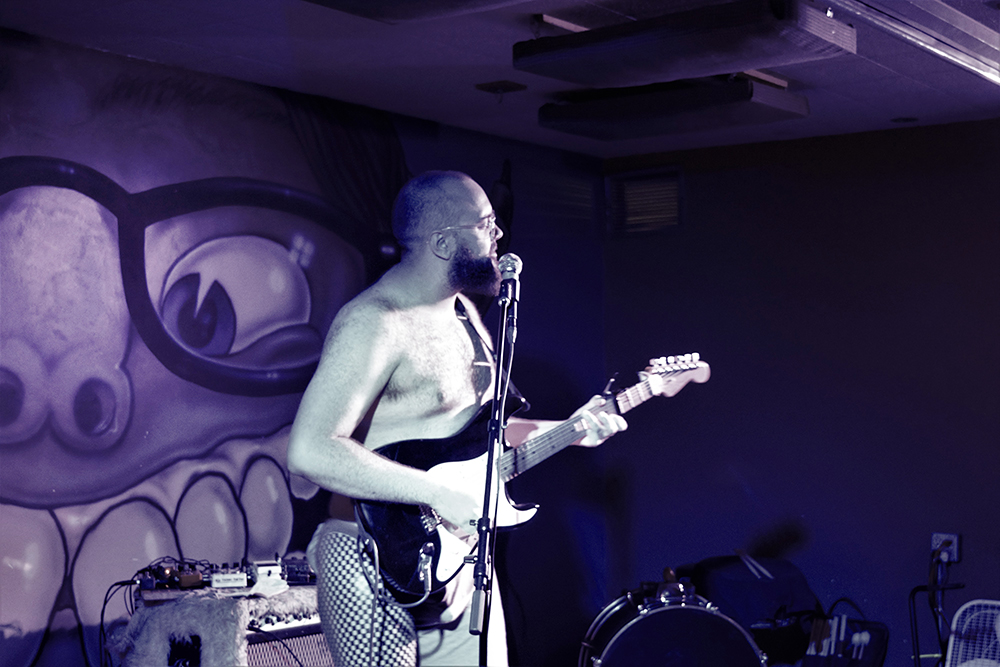 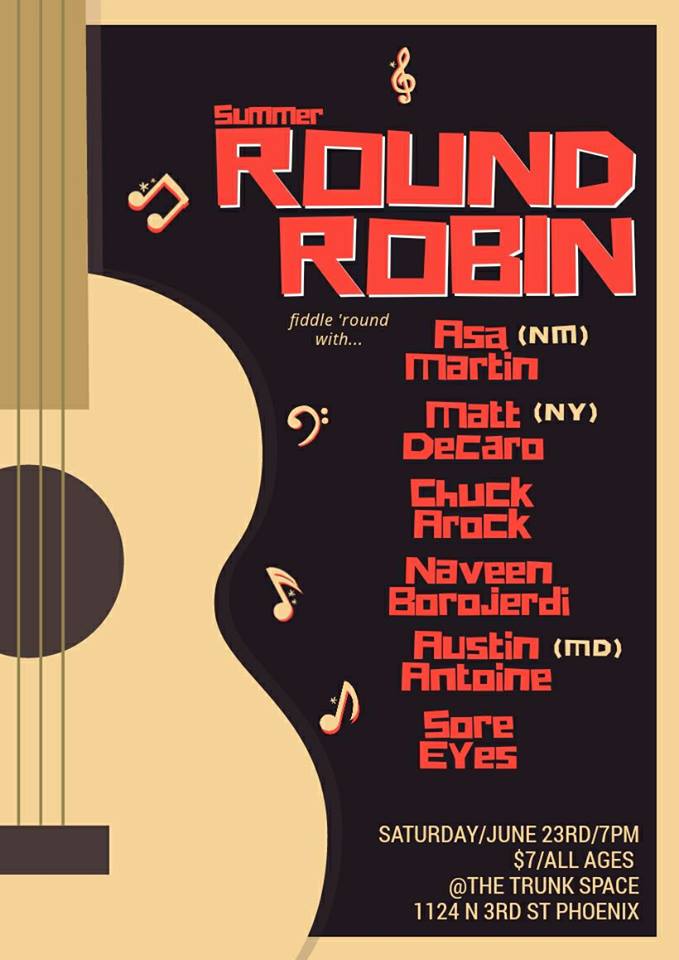