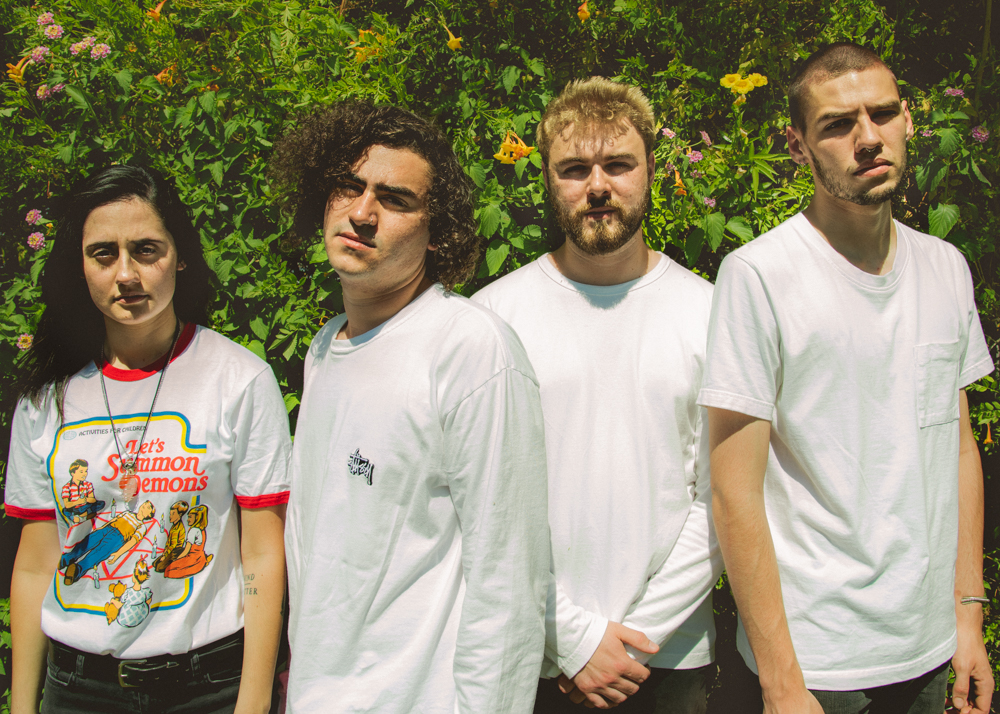 Someone Sober | All photos by Athena Burton

Someone Sober has managed to straddle a very fine musical line. They are familiar without being derivative and comforting without feeling safe. The band is comprised of guitarist/frontman, Alex Polimeni, drummer, Craig Stauffer, guitarist, Macy Santa Maria, and bassist, Anson Knopp.

Along with the four members who occupy the stage during performances, there are two other people integral to the bands music and aesthetic, photographer Athena Burton, and producer Kenny Harmon.

I sat down with the four official members to talk about how Alex does not get blackout drunk during the band’s shows.

Jacob: Someone Sober plays a pretty even mix of house shows and shows at more traditional venues. What do you guys find is the difference between the two?

Alex: They’re both equally as fun, but with house shows it’s a different kind of fun. With house shows it’s balls to the wall, and we feed off the energy. With venue shows there’s a lot better sound and production, but it’s more stressful because you’re selling tickets, and you’re always asking “Where’s the people? When is everybody coming? Are the other bands bringing people?” It’s a lot more laid back with house shows.

Macy: We’re able to experiment at house shows, too. See what works and what doesn’t and then take that to the venue.

Craig: House shows are our ground to develop vibe and energy. Then by the time we get to a venue show it’s more about the performance of the music. Whereas at house shows we’re trying to get everyone to have fun and mosh around a bit.

What is a time where you experimented with something at a house show and it either worked or didn’t work?

Macy: I think when we covered “Give Yourself a Try.” [A song by The 1975] We learned that song and played it at a house show two days after it was released, so of course it didn’t have enough time to soak in. It was fun, everyone had a great time, but we were all just tripping over each others parts.

The music you guys make feels like a modernization of the mid-to-late 2000s pop punk bands. Was that something you guys talked about when you first sat down to write music for the band?

Craig: Yeah! The initial writing process was like, “Let’s get The 1975 and Blink 182 in the same room.” Then slowly we’d feed in a little bit of John Mayer, or Green Day, or whatever.

Alex: [Craig and I] both grew up on pop punk. Then we really liked this new wave of alternative rock, so we let that influence us as well.

Anson, I’m curious, because your bass playing really stands out when I’ve seen you live, when you first heard the stuff Alex and Craig were writing, what made you think, “I’m going to put some slap bass under this.?”

Anson: The rhythms and the space. Our songs–the ones they showed me when I first started–there was a lot of room in them. I learned to play bass by playing funk, which is all about not playing a whole lot, but just finding the little nooks and crannies that feel really good. It was just a natural progression. It just worked.

All four of you are multi-instrumentalists, how does that help you write and communicate with each other?

Macy: We’re all able to see each other’s parts from that perspective or that angle. Like if we are working on a drum part, we can all be like, “Yeah I completely understand what you’re doing and what you’re going for.” Input is much easier because we all get what the other person is doing.

Anson: We all are involved in the writing process, but I’m probably the least involved, other than my parts. But it is nice when we’re actually playing, knowing where everyone’s mind is at, and what they’re listening for.

I’ve been in other bands where I’ve just played my part, and I’ve been confident in that–and in my abilities–but the band just isn’t good. It’s nice to be able to understand where everyone is coming from. Craig, as a drummer, is just a time bomb, like he is always on it, so as a bass player it’s great playing with him. 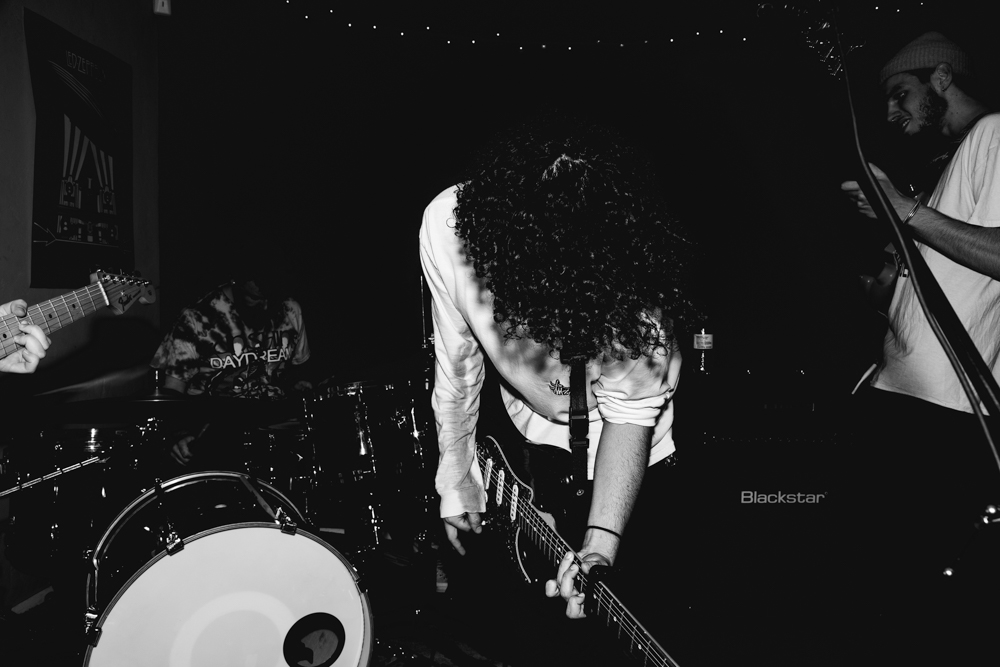 Someone Sober has a line of PRETTYFACE merch. Is there a particular message behind that phrase?

Craig: Back when me and Alex started writing, we were tossing around different name ideas. We started pulling things from our songs. We initially weren’t called Someone Sober, we just had a song “Someone.Sober.” So the PRETTYFACE thing comes from our song “prettyface.awkwardsmile.” We found that PRETTYFACE was an easy thing to start marketing.

The theme around the four songs on the EP we are going to be releasing soon, all of it kind of has to do with relationships, girls in all of our particular cases. The pretty face has always been what’s gotten us to that place and those songs–chasing the pretty face you wind up kinda fucked at certain points.

But it just seemed like it was an easy thing to grasp on to and recognize.

You mentioned the idea of having something your audience can latch onto. Along with your merch, you guys seem to have a very carefully crafted online presence and aesthetic. Why is that important to your band?

Craig: That’s the way the world runs now. Instagram especially. I go to school for that type of stuff, Athena [Burton, the band’s photographer] obviously does a bunch of photography, but she’ll send me stuff she’s designed too. We both have a strong grasp on that type of thing so we just like to execute where we can.

Anson: If I wasn’t in this band, and I just showed up to a show and then looked us up online, or maybe I see us on an explore feed. The way that we have stuff laid out, I could see it one time, and if I saw it again somewhere else, I’d say “Oh, I know those people.”

It’s a matter of keeping it interesting, so that were not putting out the same thing, but there’s a skeleton to it. Even if you haven’t heard the band you can say, “I know this band because all their stuff follows this formula.”

It seems as if there is a special community being built in Tempe right now with all the house shows and events happening at The Sunroom and what used to be happening at the Cairo House. What do you hope becomes of this community? And how to you guys hope to help?

Anson: I hope for one, people start to take it a little bit more seriously. People in the community are taking it seriously, and it shows. Shows have gotten so much better. If you think about the phrase “house show,” if you thought about that two years ago, it would be a completely different thing than it is now. I hope people see that, and they understand that Tempe is the perfect spot for it.

Macy: It’s just a good sense of community, too. You know when you go the Sunroom you’re going to be amongst all of your friends and you’re going to have the best time. It’s nice that people can associate our music with that good environment.

Alex: I know we’re going to keep playing house shows. We love it. One way we can help is just to continue doing that and not get focused on strictly playing venues. Or saying, you know, “Oh, we have to work with a promoter. We have to work with someone legit.”

Last Question. How has music made you a better person?

Alex: It’s made me a better person because if I’m in a good mood and I’m feeling it musically, I’m obviously gonna be a better person. It also opens you up to a bigger way of thinking, too. Not only writing music, and listening to all these intricate little parts, but it’s lyrics.

A lot of artists bring things to your attention to things, politically or socially, or just things about yourself you never realized other people were going through. For me, the more music I listen to the more music I can write and the better I’ll be.

Anson: I feel kinda of the same way. It changes the way you think. I know music has been in all of our lives since we were very young. I also think about people who came across it in the last couple of years. It’s definitely something that takes time to wire your brain into that kind of thinking.

Patience is the biggest thing I’ve learned from it, and that leads to happiness. Music is one of the biggest things where you can see your return on investment. Like, I’ve put in all this work and now I’m good at playing because I’ve spent all this time doing it. Being able to see physically, and hear as well, the amount of work and effort you’ve put into it is huge. Because if you’re not good at your instrument, or you’re not good at making a song there’s no real way to hide that. It’s gonna be right in the front.

Macy: It’s given me a career. It’s given me jobs. It’s given me friends. It’s given me purpose–something I can put my energy and focus and drive into. It opens your mind and makes me feel happy. It has completely changed my life since I started playing when I was ten years old. I couldn’t imagine doing anything else.

Craig: The biggest thing that I think changed all of our lives is just connection in general. Not only the people you run into at The Sunroom, but also connection on a band level. When we’re mid-set and we’re having a good-set. I don’t have to think…(struggles to find words).

Alex: I blackout during a show. (Quickly) Not from alcohol or anything! Because of the strict energy and connection between my homies. I get tunnel vision and then the shows over.

Someone Sober has an upcoming shows on August 3rd at Pub Rock. They plan on releasing a single at the end of summer, and releasing a four song EP in October (or earlier!). You can follow them on Instagram.