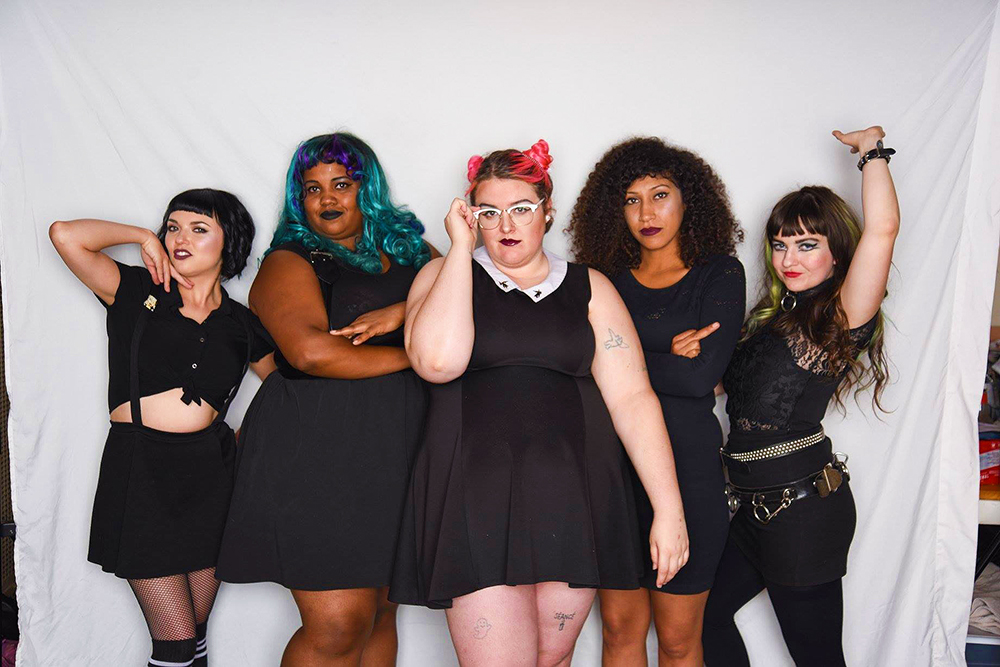 Photo courtesy of Fatty Cakes and the Puff Pastries

The pinnacles of band history have been reached by those who have created their own worlds.

What organizations like The Beatles, Fleetwood Mac and NWA have in common is that their music was only part of their appeal. Their photos screamed “badass”, their clothing was distinctive, and each personality stood out while also complimenting those of their bandmates. Even more importantly, these artists tapped into the zeitgeist of their respective time periods.

While many amazing bands exist in 2018, the majority lack the above-mentioned qualities that can turn a mere musical group into a world-changing institution. But in the magical California wonderland of Fresno, such an institution exists.

They call themselves Fatty Cakes and the Puff Pastries. Amber Fargano (code name “Fatty Cakes”) shreds at the electric ukulele and sings with a Corin Tucker-level ferocity about topics ranging from aliens to unicorns to pizza to mental illness and self-care. As for The Puff Pastries, Vishinna Crowsmith (bass) and Audrey Johnson (drums) lay down menacingly peppy rhythms, while Staci McDowell and Victoria Crow serve as the backing vocalists/dancers, making the cumulative experience a crossover between Bratmobile and The Supremes.

Their self-titled, Alice Bag-produced debut LP will be unleashed onto the world on November 9th. In the meantime, they are gracing Phoenix with their presence on Friday July 27th at The Trunk Space. They will be joined by grunge punk tourmates Squid Ink (which features Vishinna and Audrey from The Puff Pastries) and local superheroes Sturdy Ladies and Hi My Name Is Ryan. Those who have the ability to attend have been given a gift, an opportunity for an unforgettable show-going experience.

The band was kind enough to answer some of our questions, and as the reader, you are the beneficiary. You’re welcome.

Amber: I came into the world just knowing it. My mother would put headphones on her belly when she was pregnant with me, and my father is a guitarist who would practice his heavy metal licks by making up songs for me and my Casper doll. I’m a visual artist as well, but being able to express myself through my voice and through movement has become necessary for me.

Vishinna: Music has been a form of therapy for me and a way to venture outside of my traditional and cultural influences.

Staci: It’s the most fun thing to do with my best friends, duh! It’s where we get to express all the pain/joy/silliness in our lives!

What music has had the greatest impact on what you create?

Amber: Anything B-52s and Fever to Tell by The Yeah Yeah Yeahs. I’m obsessed by the wacky world that The B-52s created with their vocal harmonies and hilarious lyrics. Karen O’s vocals on F2T were hugely inspirational to me at a young age—so raw, so lusty, so full of rage and hurt and excitement.

Vishinna: Sonic Youth’s Washing Machine really brought me into the indie punk rock style. But Janet Jackson’s Velvet Rope tour is what made me want to be a performer! She was so empowered and strong, I just wanted to be that person for myself and maybe for others too.

Staci: Le Tigre’s first album, when I first heard that I was a teenager learning about intersectional feminism, and I really wanted to dance. And The Spice Girls! I am living my grrrl group dream on tour!

Explain the power of dance in your band.

Amber: Dance is another form of storytelling, and to have your friends helping tell your story and feeling your fantasy with you is just so powerful.

Staci: We’ve always been inspired by girl groups and The B-52s. We get to have a lot of fun with the crowd, let out all the middle fingers at the enemy, and be sassy as fuck. It’s cathartic!

In your newest single “Panic Attack”, you repeatedly proclaim, “I’m a weirdo.” Explain the importance of being a proud weirdo.

Amber: Before Fatty Cakes, I had a web show called Weird Grl Live. I also did a sticker series called Weird Grls where I would create big-mouthed women and femmes saying rude and funny shit. Being “weird” was my first run of taking a word back, it was me dipping my toe in the water before I started taking back the word “fat”.

Adults are still very cruel to me from time to time for being me. We live in Fresno, where it is very conservative and I am absolutely very weird. But I know it’s a good thing. I feel pride in it, when I run into kids who have never seen anything like me before. I see this look in their eyes like, “Wow, who is this giant woman with pink hair?! How did a cartoon become real?!”And then they want to talk to me. And it makes me feel like I am doing the right thing by being me.

Vishinna: Being a queer black fat-bodied woman in this society hasn’t always been easy for me, but all we can be is ourselves. So reclaiming that space in society as a self-proclaimed weirdo outside of social norms has been empowering!

Staci: “Panic Attack” is about struggling with social anxiety. Instead of isolating ourselves in fear, we can create something brighter and be weirdos together.

What are some of the key messages that you hope listeners receive from your music?

Staci: I hope listeners see that womxn bands won’t be put into any box to appease the white supremacist patriarchy. I hope they have fun with us and feel seen and validated in these scary times, know that FAT is not a bad word, and know that if they’re a Nazi they will receive our fists to their faces!

Amber: Being yourself is the key to fulfillment. Standing up for your friends is important. Fighting racism, sexism, transphobia, fatphobia and the oppressive powers that be is vital. We have made a lot of friends in the world, and sadly some enemies too. To those who have defined themselves as our enemies, we ask them to look at our hearts and ethics, to put down their weapons of words, and to join us in continuing to fight the actual oppressive powers of our city and country. We are stronger together, and we are stronger as a grrrl gang.

Don’t miss Fatty Cakes and the Puff Pastries along with Squid Ink and local support Sturdy Ladies and Hi My Name Is Ryan this Friday, July 27 at the Trunk Space. Doors are at 7:00 PM and the show starts at 8! Tickets are $7. 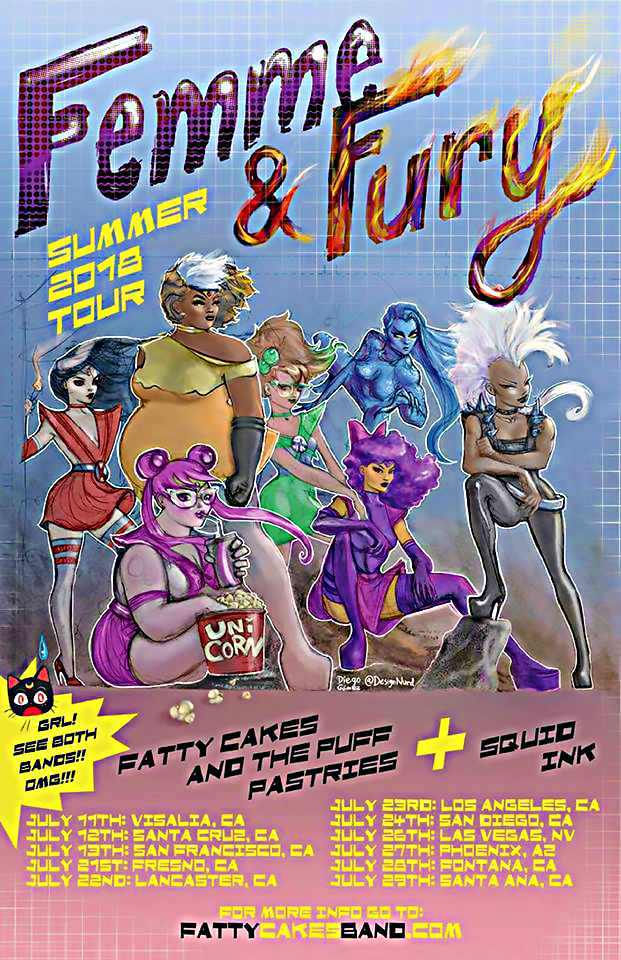