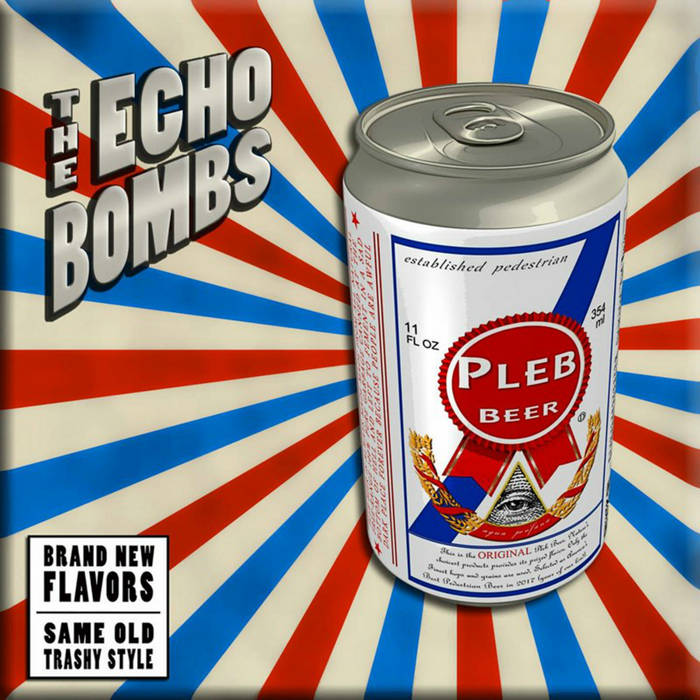 1 : a member of the Roman plebs
2 : one of the common people

1 : Short for plebeian. Someone with very basic, boring, or generic taste. They have no interest in the artistic value of things. – PSB13

2 : Someone that’s hella basic and usually relatively unintelligent too. – bishidontneednomutherfukinname

4 : Often used as a synonym for “peasant,” a “Pleb” is someone who is regarded as being of a lower standing/status. The pleb will often not realize that they are, in fact, a pleb. And may even recognize someone who is also seen as a pleb as (more of) a pleb. This is of course a falsehood a pleb will tell oneself in order to make themselves not feel so bad about being a pleb. For, deep within their heart of hearts, the pleb hates him/herself more than anything. – TheDude93

With a rally cry akin to the anthemic “Primus Sucks!” — albeit with a modern, ramped up, completely self-deprecating spin that would make Primus blush — The Echo Bombs are here to beat up all you nerds and pretty girls alike with their new album, Pleb.

Now, I’ve been a fan of the E-Bombs since the beginning — different lead singer, non-human drummer. I watched their glorious metamorphosis into the King of Uncool. I now get to witness the de(a)scension to Pleb.

For Pleb is all things: both sides of the same coin. A critique of, and comment about, the self and society. All in under one half hour.

The band sets your expectations incredibly low with album opener, “Let Down.” Essentially failure transformed into song, the woo-hoo-hoos at the end are the vodka-soaked cherries on top. I love it.

Gone is much of the reverb-swamped surf of their previous material. Vocalist/guitarist Eddie, bassist and backing vocalist Daniel, and drummer Micheal — clearly the most talented member — ditch the surf for the dirt on Pleb.

What sounds like a total loser wishing “I just wanna be cool,” totally flips one eighty when “enough for you,” escapes lips and transforms a modern rock ballad into an insta’ classic on “Cool Enough”. “We should run away/ fucking quit our jobs/ we should run away/ you deserve better than this.” Pleading, though they know nothing will ever change.

One of the highlights in this pile of puke is “Afterparty”. A truly sludgy beginning that certainly must have been recorded whilst highly intoxicated, Eddie laments, “If I get drunk/ it just might work/ if I get high-igh-ighh/ it might not hurt/ I just want to forget about you/ if I get drunk it just might work.” He continues with, “And all the jokes we had have died/ and all the songs we loved no longer apply/ and all the places we frequent are haunted/ by the ghost of jokes that died/ AND I DON’T WANNA HANG OUT AROUND THIS PART OF TOWN!” Each and every time I hear it I get chills baby, chills.

“Pistachio Pudding”, the first of two singles released prior to Pleb, is the perfect intro to the pleb lifestyle: “I was a teenage mass of flesh-eating pistachio pudding/ Now I’m all grown up/ I got a job, I got a mortgage/ I hate my life.” It also features a sick dual guitar solo, and I mean that it literally makes me sick to hear it. >hurls<

Bringing some that abandoned surf back into the mix, “Earthworm” is another personal favorite. Nothing like a song about death packaged and delivered as the new summer dance craze to really get you moving. And speaking of moving, “Gimme the Gas”, revs up the energy even further. One thing I really enjoy on this record is the constant back-up vocals that permeate the entire album. From oo’s and ah’s to primal screaming, they certainly round out The Echo Bomb’s sound and I wish I heard them more on other records from around town.

The gloom and doom returns to rear it’s massively ugly head on “Family Tree”. “I love my mom, my mom is a fuck-up/ and all she taught me, was how to be a fuck up/ it’s in my genes, it’s not my fault/ don’t blame me, it’s not my fault.” As you can tell, there is a complete lack of accountability here as this modern generation is just looking to blame anyone but themselves for their disastrous lifestyle. Rightly so, because fuck the past.

Second single and showstopper “White Beyonce” contains my favorite line of the album, well at least the line that get’s stuck in my head the most, “Oh you look so good without your eyes!” Talk about an ear-worm, I almost pity my co-workers as I’ve been constantly screaming this at them while they have absolutely no context as to what it’s from. Ha.

Alas, nothing is perfect as there are two real (SO REAL) things wrong with this album. Last autumn’s single and video “Donnie” did not make the Pleb cut, left to rot in Sub-Basement D of their Bandcamp page (the video is actually pretty good and you should totally check it out because, after all, you can’t on the album), which I believe is total lack of oversight. Big Lebowski fans will buy anything after all. But the ultimate, let’s fuck with a man’s emotions moment occurs throughout the final track, “San Diego 2012”. An outrageously pretty song is just destroyed by an off-time metronome throughout its entirety.. except that’s just the digital version.

You see, this is why you always must buy a physical copy of any favorite album a band puts out. Fact is, the internet is full of lies and deceivery. If you wanna’ get real, you have to get physical. The CD version of Pleb contains a perfectly beautimous “San Diego 2012” with absolutely no click at all, but also a secret, absolutely must-hear song that simply must be referred to as “Elvis is Dead!” (but is actually called “No Encore”).

Pleb is raw. Pleb is grit. Pleb is beautiful. And it’s one of the best albums I’ve heard out of this ‘burg in sometime.

Make sure to catch The Echo Bombs this Saturday, July 14 at the Time Out Lounge with The Exbats and The Rifle. You can also check them out at the Endless Bummer 3 Pool Party happening in August.