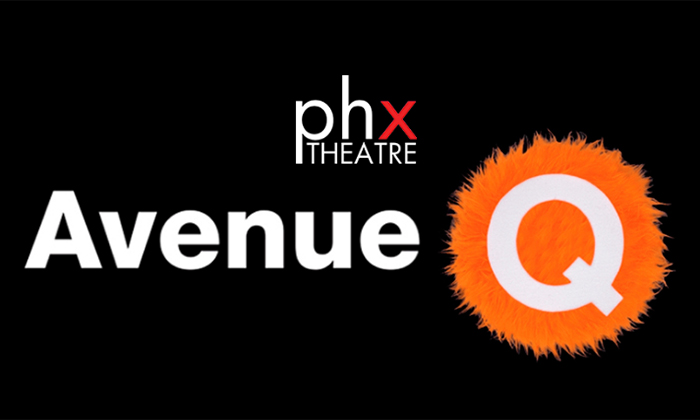 Avenue Q ran off Broadway, shifted to Broadway for over 6 years becoming the 24th longest running Broadway show, then shifted back to off Broadway the month after closing. It’s still running at New World Stages, and celebrating its 15th year this month with special anniversary performances featuring some of the original cast members. It defied the odds in many ways. Vocal New York influencers did not think it was a show for Broadway. In response, it won the triple crown at the Tony Awards: Best Book, Best Score, and Best Musical, upsetting the mega hit Wicked in the Award’s most coveted categories.

A staple in the Phoenix Theatre repertoire, Avenue Q is just plain, unfiltered, unadulterated fun and this newest iteration demonstrates the familiarity the house has with this show. The set is beautifully constructed, but not overworked. The puppets were built by Rick Lyon, the original creator of the Avenue Q puppets and its subsequent tours and international productions which explains how perfectly recognizable they are. The sound quality of the theatre is rich and full, allowing every word to be heard and every high note to soar within the space.

But in the end, what makes this production truly successful are the incredible performers on stage. There is a relatively small, and extremely solid, cast. And keeping to the structure of the original production, the puppeteers play multiple characters and brilliantly bounce between them, handing them off to other castmates and at times even voicing one puppet while holding another. This may seem like would be distracting, but it is quite the opposite. There is something quite magical about seeing the range of each performer and how they bring unique personality to each character.

Emily Mulligan Ferry, Toby Yatso, and Drake Sherman are absolutely sensational. Ferry has tremendous charisma and serious vocal chops. She plays both Kate Monster and her nemesis Lucy. These are totally dichotomous characters, and Ferry does a fantastic job bringing both realistically to life. Yatso not only does wondrous things with his voice for both Princeton and Rod, but he adds a layer of physicality on top that makes it difficult to look away from him and see the puppets and this is not a bad thing. He melds the puppets to himself, and they become a single entity. It’s quite exciting to experience. And Drake Sherman artfully fulfills everyone’s desire to hear the puppets speak as nostalgia thinks they should. His sweet gruff is absolutely spot on.

This is ultimately a show about how hard life is, and the reality that smacks each of us in the face as we shift from childhood to adulthood. Then from ‘just out of college’ adulthood to ‘after the optimistic haze wears off and we are just grown ups trying to get by’ adulthood. It’s raucous, and funny, offensive and sweet. The show strips us down to our most vulnerable and private realities while simultaneously poking fun at them. It embraces the traits and thoughts we are most shameful about, and makes light of them. It reminds us that everyone is flawed, sorrowful, and unfulfilled in some ways. It gives us permission to laugh at our shortcomings and how seriously we take ourselves. It exposes our multitude of imperfections, and frames them as perfectly normal and pretty darn hilarious.

This was a groundbreaking show when it first arrived on the scene. It spawned a generation of comedy using children, animation, and puppets to make light of adulting. So for some seeing the show for the first time, it may feel a little dated. Fifteen years ago, this show was doing something new and fresh, addressing topics that were still taboo. Some of the content is still sadly relevant, such as a man stuck in the closet, ashamed to come out to his closest friends or even to himself. But some concepts feel much differently than they would have originally. In this current social climate, it is difficult to swallow the assertion that we are all equally racist. But the sentiment of a community of very different people coming together, letting their walls down, sharing who they truly are, and accepting one another sets an example we could all use right now.

Avenue Q kicks off Phoenix Theatre’s 2018/2019 season. It runs Thursday through Sunday until September 9. Tickets are available on Phoenix Theatre’s website. Grab them now, while you still can! Opening night was sold out, and tickets seem to be selling quite quickly.

If you are someone that likes to see how shows like Avenue Q come together, there is a wonderful feature length documentary called Show Business: The Road to Broadway (2007) that chronicles the new works, as they were in development, that ultimately became the Tony Nominees for Best Musical in 2004. It is absolutely fascinating and I recommend you try to watch it in tandem with your upcoming trip over to Phoenix Theatre.