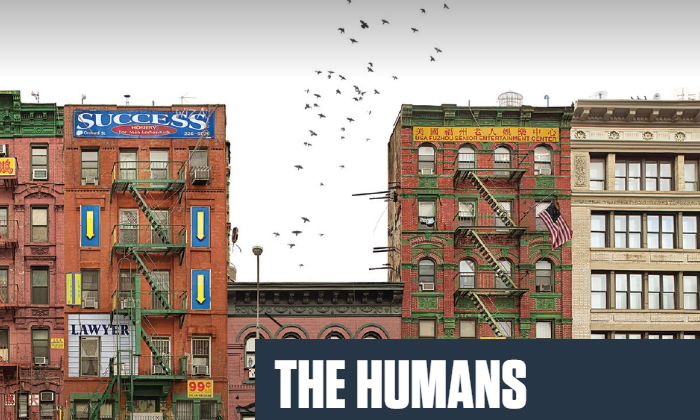 I’m going to show my cards here and, admittedly, it’s quite an uncomfortable exercise.

For once, I didn’t do my homework and went into a show nearly blind. No content research, no reading of the play, nothing. Because it was the ultimate result, I’d like to say that I did it as an experiment to test my skills at assessing a work organically, completely unbiased and unfiltered. But the truth is, opening night snuck up on me and I found very little time to study The Humans before seeing it. The result was a beautiful, powerful, funny, and profoundly reflective theatrical experience.

There was some local hype established on the star power of Richard Thomas, the original John-Boy of The Waltons, which clearly excited and intrigued many attendees. Pamela Reed, who is perhaps most famous for being Arnold Schwarzenegger’s partner in Kindergarten Cop, but holds a special place in my heart for playing Leslie Knope’s mother in NBC’s Parks and Recreation, also caused some buzz. I was most excited to see Daisy Eagan who I watched Audrey Hepburn present a Tony to for her role in The Secret Garden when Eagan was only 11 years old.

On a reality TV show from the early 2000s currently re-airing on Bravo, The It Factor, Eagan struggled to re-establish a career as a grown up while battling the expectations that come with being one of the youngest Tony winners in history. Her portrayal of Brigid Blake in The Humans felt extremely fitting in consideration of those circumstances. A character stuck in between childhood and adulthood.

In this show about family coming together to celebrate Thanksgiving, Brigid is the hostess. In her youthful ignorance, she is a loving grandchild so proud of her new two-story New York rental that she fails to consider the barrier stairs create to her wheelchair-bound grandmother, and even her aging parents. A recent college graduate struggling to find her place in the world, questioning if she has the tools to reach professional success. This was a role meant for Eagan, and it was a pleasure to witness.

Richard Thomas and Pamela Reed as Erik and Deirdre Blake were fantastic, as expected. Parents first and people second, although perspectives shift as we learn more about their relationship dynamic and the motivations that make them tick. They are dealing with their own faults and demons, while simultaneously having to go through the horrifically painful experience of caring for a parent that is transitioning out of this life.

Most of the time Momo, played by Lauren Klein, is on stage she is ‘out of the frame’. An elderly matriarch, confined to her chair and limited by a brain no longer able to process. The family members speak of her and for her, and there is a sweetness that comes from their reverence of the traditions she instilled in them. The small cast is rounded out by Therese Plaehn as Aimee and Luis Vega as Richard. Plaehn’s portrayal of the ill and broken-hearted young lawyer who, in many ways, is the glue that binds her family together, is absolutely spot on. And Vega, who is the only outsider in the family, is charming and mysterious as Richard: both loving and puzzling. As Brigid’s live-in boyfriend, he cooks the meal around which the family breaks bread, and provides an impartial window through which to view the Blake family.

This is a show about failure, rejection, and embarrassment. But it is also about the love that binds us and the bonds we build with others through shared experiences. In whole, The Humans leaves a mark because through it we are peering into our own families. Even at the most vulnerable moments. The difficult conversations we have to have as parents age and children move away and establish their own flawed families. It is a beautiful reminder than all families are made of broken, incredible, loving, and wildly different people. Because we are all just human.

The Humans tour is coming to a close, having started in November of 2017. It played ASU Gammage May 29 – June 3 then moved to San Francisco. There is still time to catch it at its last stop at the Ahmanson Theatre in Los Angeles June 19 – July 29. Tickets are available at the Ahmanson’s website. 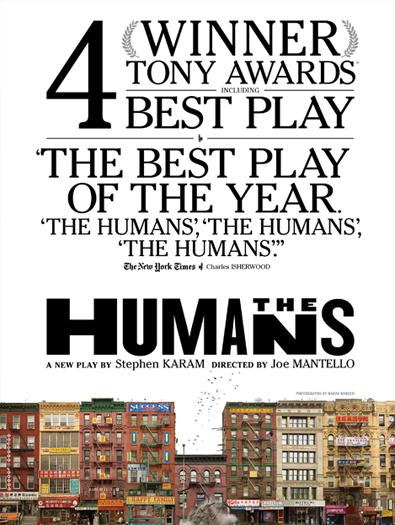