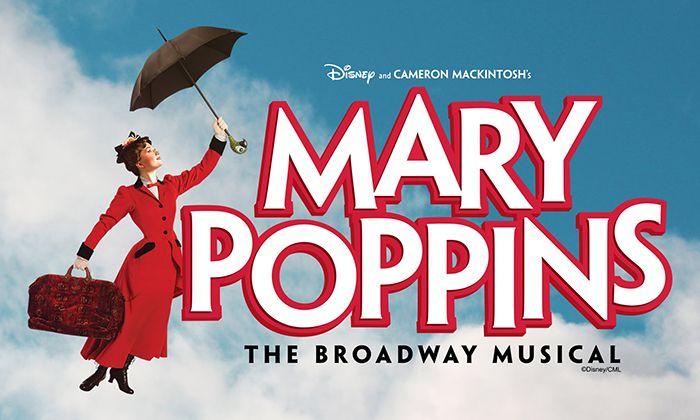 I will put this simply, but with the most fervour I can muster. Arizona Broadway Theatre’s (ABT) current production of Mary Poppins is an absolute must see! No ifs, ands, or buts.

I am somewhat ashamed to admit that I am a relative novice to ABT, having only seen my first show in early 2017 as part of its 12th season. As soon as I experienced the caliber of talent and production value this local theatre was capable of, I was hooked and could not stop telling people about it. I have since attended several shows, and proudly brought companions to this beautiful little local gem of ours. Of all the shows I have experienced at ABT in the past year-and-a-half, Mary Poppins more than takes the cake. And, aside from being one of the most enjoyable nights I have ever had at a local theatre, I think it is fair to expect that it is a profoundly strong indicator that the best is yet to come from ABT.

Rather than the standard grand drape, during dinner service a beautifully painted curtain of Cherry Tree Lane envelopes the stage. So by the time the show starts, all in attendance have a comfortable familiarity with the Banks’ street. It takes very little time for all the pieces to fall into place. The children are naughty and cannot keep a nanny, while their parents are struggling with their own personal battles. They are in need of a dynamic shift. In enters Mary. And the magic begins.

It is very quickly obvious that the show has none of the anticipated boundaries one might expect. Mary’s carpet bag is full of impossible things; a hat rack, an oversized mirror, and somehow, even a bed. Mary can fly, statues and toys can come to life and dance. Rooms can completely fall apart, and be restored instantly. Somehow Clayton Phillips and Glen Sears make flawless magic. And they make it look easy.

The cast does the same. Gracie Palmer & Wyatt Chamoff as Jane & Michael are adorable. Although they act out, it is clear that they are doing so to loudly express their desire for love and affection in a household that has lacked it for far too long. Chris McNiff is a charming Bert, exuding all of the endearing qualities necessary from such an iconic and loved character. Jamie Parnell is just right as the lost and broken Mr. Banks who undergoes the largest transformation in the show’s duration. And Renée Kathleen Koher manages to impeccably embody the character of Mary Poppins.

The stage adaptation is slightly different than the 1964 film starring Julie Andrews and Dick Van Dyke. Some songs are glaringly missing, such as “Sister Suffragette” which is one of my favorites. There is also a scene meant to teach the children to treat their toys better, that is just plain creepy. But the majority of the staples appear, different but with new life. Stand out moments include the “Supercalifragilisticexpialidocious” showstopper in Act 1, the “Step in Time” tap showstopper in Act 2, and a visually astounding closing number, “Anything Can Happen”. And the quiet and subtle “Feed The Birds” is quite possibly the most impactful moment of all. An introspective look at how a contribution of ‘nothing’ can lead to change when it is understood that ‘nothing’ is indeed everything. That a family shaken, in the face of financial crises and fighting through the turmoil of existence, need nothing more than to love and appreciate one another.

This show will leave you smiling, laughing and perhaps fighting back a tear or two along the way. I highly encourage you to get out to Peoria to see it before it closes on June 30. I did not see an empty seat in the house, so I doubt any discounted tickets will be available via Goldstar, however, you can (and should) purchase tickets directly from the ABT website. For a limited time, if you are purchasing at least two Dinner and a Show tickets, you can use coupon code VPPOPPINS2 for a 25% discount. Oh, and I suggest you splurge and order the Chocolate Smash Penguin Cake for dessert. I am still dreaming about that delicious mash-up of chocolate cake, cheesecake, and fudgy chocolate brownies.