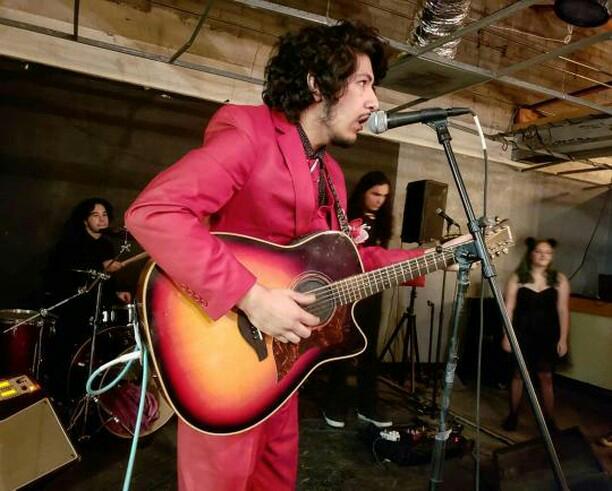 If you were in a punk band in high school, you probably thought you sounded as good as Sad Dance Party does. In reality, you probably didn’t (maybe you did, I don’t know you). Although they are young, Sad Dance Party’s music feels mature–as mature as you want your punk music to be, anyway.

I sat down with vocalist Pete Resendiz and guitarist Will Kessler in attempt to feel less old.

The name Sad Dance Party captures a lot of what young people feel at the moment. In a sense, you guys are sort of stylizing sadness. Do you think that is something teenagers are doing more of nowadays?

Pete: I think it is embedded in every person regardless of age. That’s a simple answer right there. I don’t think that’s really a question for me to answer.

Will: I think there is definitely that stylization of depression a lot.

Pete: There’s definitely a… maybe glorificiation–maybe that’s the wrong word to use, but a lot of people use it.

To follow up–there is glorification in some places. I don’t think that’s what you guys are doing. The word “capitalizing” comes to mind. You’re taking something people might not talk about and making it part of your style. Was that a conscious choice with the name?

Pete: Lyrically that has always been a conscious choice. The name actually just came from me thinking of random names and once I hit that one, I did think about that. Like, “Oh, I like to try and have a good time being depressed.” That was a good way for me to put that in the name.

Obviously, you can’t compare things, because you’ve only grown up when you’ve grown up, but from my perspective it feels like young people’s humor has gotten a lot darker. Is that something you’ve noticed?

Will: Especially with us.

Pete: I think people have always had [that darkness] there’s just a better outlet for them to be that way now. Like this [gestures around, points to a phone which is live streaming the interview on Instagram]. It’s easier to see it now. Have you seen the movie Heathers?

Pete: It’s an 80s or 90s movie. It’s one of Winona Ryder’s earlier movies. That movie was really dark and it was catered to a younger crowd. So I think it’s always been there. I think kids, I think people of all ages have always had dark humor.

Absolutely. I don’t mean to say that dark humor only exists in your generation, but it’s definitely something…

Yes! Why do you guys think that is?

Pete: Because human beings are progressive. That’s an easy answer.

Will: People are more able to speak their mind about a lot of things.

Pete: Since the dawn of time we’ve been becoming a lot more progressive and more open with things.

Will, do you think that being in a band has helped you get through high school? And maybe allowed to know yourself a little bit better than your fellow classmates?

Will: Oh, yeah! Definitely being around people, especially older people, has helped me be a lot more sociable. Being in a band, you have to work with people, and interact and have different ideas really helps a person grow.

What do you think being in a band has taught you about working with other people?

Pete: It’s a lot of apologizing and patience. It’s important to recognize and say, “Oh I was a little too aggressive there.” And just give a quick “sorry.” You really have to find the right people to be in a band with. The first year this [Sad Dance Party] existed, it was just me learning to be in a band. It was different people all the time. You have to find the right people, and it took me a year to do that.

I really like what you mentioned about the first year you were in the band, you were learning how to be in a band. What were some mistakes you made, or obstacles you overcame, where you thought, “Oh, I got to change this going forward.?”

Pete: In any business you start, because starting a band is like starting a business or a brand, you can’t trust really anybody. It’s important to be weary of who you’re talking to, and to be clear what you’re talking about. A lot of mistakes I made were just jumping on any show. Because that’s not really how you brand yourself. That’s cool for bands who are just looking to play a lot, but we’re looking to do something bigger than that.

Will: We try to be really smart about picking shows.

Pete: We try to only do like one show a month usually, unless it’s really promising. But, yeah, the first year it was a bunch of mistakes–trusting the wrong people, picking the wrong recording engineer–to the point we felt we were being threatened for our money. Then throwing out an entire album that we spent 300 dollars on. Then also, choosing the wrong label. At first we had our EP with a label I won’t name, and they sent our stuff to us all destroyed, and I lost like 400 dollars.

I basically learned to be really careful about where you spend your time and money, and what direction you take your art, because there is a specific scene and a specific crowd to cater to, regardless of how bad I don’t want that to exist, that’s just how capitalism is.

What about cassettes are cool? Because I personally don’t really get it.

Pete: From a financial perspective, a business perspective, cassettes weren’t something I thought were going to sell out immediately. But I noticed a spike in them being more popular once Playboy put out their last album. I have cassettes right here from bands that have just passed through. They’re just so cheap to make, and are like five dollars to buy from any band.

Will: There’s a very good aesthetic.

Pete: Yeah, it’s very appealing. I haven’t figured out why either, but it seems to work, so I’m just gonna keep going with it.

What about your music are you the most proud of?

Pete: That’s a really cool feeling. I remember when we started we weren’t all into it, and I think we knew that. But we just kept doing it because there was nothing else to do. There wasn’t anything else to do but get jobs. I’m really proud the songwriting is getting more eclectic and emotional. The way we play our instruments is more reflective of the songs and their character.

What do you mean by that?

Pete: Each song has a different personality. I don’t think all of our songs sound alike. I’m proud of everybody. I’m proud of you guys [the rest of the band] for sticking with it and getting better. I’m also proud of myself. I feel like I’ve been better able to approach myself emotionally and put it into songs.

What was one of the most challenging, either songwriting or performance, obstacles that you guys have had to overcome?

Pete: Yeah playing on stage you fucked up an amp once.

Will: Yeah I fucked up an amp, really bad.

Pete: It was a big show too. It was Broken Hearts Ball. We set up this thing with our friend Travis James called Broken Hearts Ball that he did two years ago. It’s basically just punks having Valentine’s Day. Will was just dancing too hard and he broke the input jack on the amp.

Will: Yeah the input like fell in and I couldn’t…

Pete: He just took his guitar off and ran into the crowd and I said “Ok, if anyone knocks him down you get a free cassette.” You just gotta roll with things.

Did anybody knock him down?

Will: No. I’m a pretty sturdy guy.

Pete: We certainly did not give out a free cassette. I know that much.

Sad Dance Party have just finished mixing their new album to be released in Fall 2018, Spontaneous Human Combustion. For more SDP visit them on Facebook or Bandcamp.