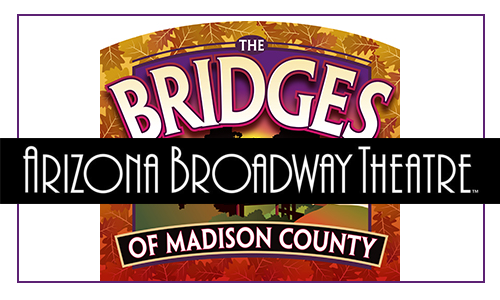 Every time I step into the mainstage at Arizona Broadway Theatre (ABT), I am stunned with how beautiful the space is.

Part formal restaurant, part performance venue, attending is the epitome of a ‘night out on the town’. The beautifully red-draped stage is clearly the epicenter of the evening. But it stands silently and non-invasively as a backdrop during meal service, a constant reminder that your meal is merely a cherry on top of the fabulous entertainment yet to come.

I absolutely love the ABT format. Theatre-goers take their seats, up to 2 hours before the show begins, and enjoy a delicious prix fixe meal inspired by the show. A starter (often a choice between a soup and a salad) is served first, along with a bread basket. The included entrée options are diverse, appealing to vegetarians, pescatarians, and meat-eaters alike. The menu also provides add-on options such as appetizers, drinks, and upgraded entrees while your meal is served by a very attentive wait staff. Leftovers, should you have any at the end of the meal, are carefully packaged and refrigerated for the duration of the show. And at the end of the meal, you have the option to order dessert, coffee, and additional drinks to enjoy during intermission.

The shows are always full of serious talent, some local and some not. The Bridges of Madison County, which recently closed, was no exception. Bryant Martin was charming and charismatic as Robert, and Kaitlin Lawrence was captivating at every moment of her limited time on stage. Cassandra Klaphake’s beautiful voice often felt too operatic amongst the country and folk music surrounding her. With roots in Italy, and thus in opera, Francesca is a foreigner and an outsider. It was an interesting directorial choice to never make her feel otherwise.

At its core, The Bridges of Madison County is a show about love so intense that it cannot be avoided and it cannot be contained. This particular rendition did not feel like a passionate love story. The performances were individually solid, but the chemistry was strained. Andy Meyers as Bud demonstrated the greatest amount of sincerity in his love with Francesca, making acceptance of the betrayal of he and the children even more difficult. But the staging was beautiful, the talent threshold was high, and it made for a wonderful night out. All while supporting local theater. Still definitely worth the cost of admission!

Mary Poppins is currently in it’s run at Arizona Broadway Theatre. It opened June 1 and is running the entire month. I’m looking forward to catching that one, and taking friends and family along with me! I have seen many shows at ABT and always walk away stunned and proud of the caliber of work being showcased in our local valley theater.  If there are shows you know you want to see, you can get tickets in advance by subscribing or purchasing from the ABT website. There are also last-minute tickets available through Goldstar for 50% off. And remember, these include the meal so the half-price seats are a total steal!

Perhaps you’re interested in the performative? Arizona Broadway Theatre is holding adult (ages 16 and up) auditions for singers/actors/dancers for their upcoming 14th season this Thursday, June 14 from 5:00 to 8:00 PM at their theatre in Peoria. Scope the Facebook event page for more details.