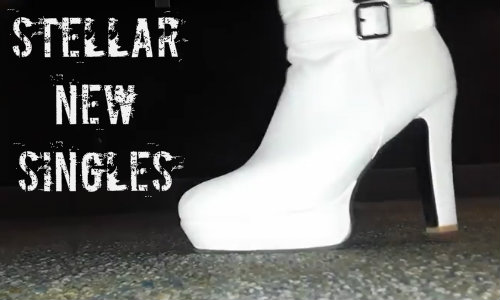 “Strength Was Always Your Weakness”

Nicole Laurenne (of The Darts) and Bob Hoag (of Flying Blanket Recording) join The Breakup Society on their new single for an all-star summer smash. “Strength Was Always Your Weakness” shines a bright ray of sunny pop into the overheated darkness of garage rock and offers listeners a little sample of the band’s much antipated new album. The Breakup Society has a show slated for July 28 at Pho Cao with Weird Radicals, San Jacinto Prison Death Row Band, and The Burnlackers. Maybe, just maybe, they’ll have a fresh new album ready for you. Maybe not. We’re not trying to rush those sweet Breakup Society sounds…. but…. it would be a nice addition to our summer listening. Just sayin’.

“Shaky in the Knees”

L.A.-based five-piece might come from the alt-rock sphere, but their latest single has me feeling all kinds of indie-folk fabulous. Grizfolk released their debut EP back in 2014 and followed up with a full-length two years later in 2016. This year, it looks like the band is focusing more on providing fans a steady stream of new singles — “In My Arms” (feat. Jamie N Commons), “Endless Summer”, and this latest track that has a dreamy feel I found instantly enchanting. Check out “Shaky in the Knees” from Grizfolk and keep watch for new tracks from the band this year on Spotify.

“Thank You for Alphabetising My Spice Rack”

If you can’t tell from the spelling in the title of this track, My Pleasure comes to us from across the Great Pond from a place called Hull [UK]. This quirky number from the politely (or narcissistically) named band, My Pleasure, can add a short uptick in energy to any playlist. “Thank You for Alphabetising My Spice Rack” starts off as an innocent joke about “dad’s obsessive tendencies,” but like most jokes about our parents, the song takes a darker, far more Freudian turn. And, as some of you may know, I’m quite the sucker for upbeat expressions of deep-seated anxieties.

Here we have another Los Angeles alt-rock band but I feel that Squid Cult has a bit of a Brit Indie style with the vocals that move from drab to dreamy and back again. “Baby Blue” was inspired by the “desolate Chaco Canyon of New Mexico” so maybe that’s why it strikes such a tender chord in this desert rat’s music-loving heart: a certain windswept starkness hidden beneath the bouncy waves of mellow indie rock. This track marks the debut single from Squid Cult so I’m expecting great things to follow.

The Phoenix songwriter and performer known as The Doyénne proves once and for all that you don’t need some big dollar backing to make some compelling pop hits. “Strange Kind of Love” takes DIT to a whole new place, aurally and visually, while reminding us that love is an unconfined concept. Oh, and Travis James from Travis James and the Acrimonious Assembly of Arsonists makes a special cameo appearance in the music video. The Doyénne has a show at The Trunk Space later this month with Bitter Inc., PLASMIC, Aerico, and Todash Chimes so make sure to get that on your calendar (more info here).