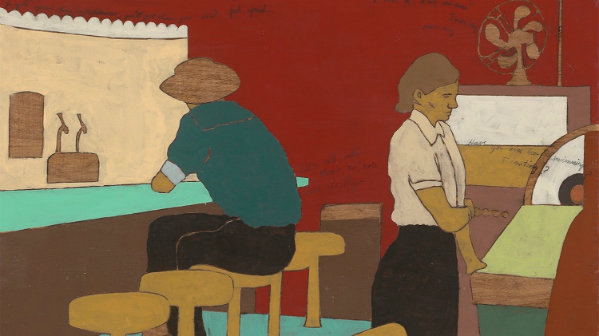 If you don’t know Erin Rae yet, you better make that a priority today. This Tennessee-raised songwriter approaches modern indie folk like she’s stringing together a flower wreath in 1971.  There’s something forthright about the earthy Americana of Erin Rae and “Putting on Airs” really exemplifies that feeling as her voice paints haunting lamentations for the downtrodden. This track is the title song from Rae’s brand new LP which came out just last week on Single Lock Records. You’re probably going to want to secure your copy of Putting on Airs on vinyl quickly before they’re all sold out.

Tyler Costolo is the man behind Two Meters moniker. Costolo only began to dabble in the realm of recorded music last year and now he’s ready to release his debut s/t EP later this very week. “Left Behind” has a somber sensibility tinged with anger and sorrow that sneak into the soundscape as the track progresses along on its dark course toward a tumultuous sea of sludgy sounds. The song addresses the loss of a loved one and the emotions “Left Behind” elicits are both real and powerful. Get that pre-order in before 6/15 when Two Meters drops Two Meters because this limited edition cassette won’t last for long.

Singer-songwriter (and harpist) Naomi Greene possess a haunting voice that will linger long after you listen. On her new single, “Collision”, it’s Greene’s voice that defines the soundscape like a will-o’-the-wisp seen in the distance that sets your mind wandering on fantastical speculations.The Paris-born, L.A.-based songbird hones in on that precise moment when your illusions crash right into your reality. According to the artist, “The song talks about distance and walking out of love with someone that you know isn’t good for you, all the while feeling the painful roars of your heart’s longing.” Naomi Greene captures that emotional stillness and turmoil on “Collision” while the lush instrumental landscape reinforces that otherworldly feeling in Green’e voice.

The British songwriter known as Ed The Dog has a bit of a cynical edge tucked down into that effervescent BritPop sound on his new single, “Funny Turns”. Ed The Dog, the music project, took shape after Ed Wetenhall (formerly of Fish Tank) suffered a bit of a quarter life crisis after his band split up and he quit his job. Rather than wallow in what might have been, Ed faced down his demons with a cocktail of “crippling fears, dry wit, and tentative optimism” and walked away with his debut LP, Shame, from whence “Funny Turns” comes to us. If you like your cynicism with a hearty dose of humor and some dance-able energy, Ed The Dog is for you.

“You Shall Be a Blessing”

Elliah Heiftez has the kind of American bootstraps story that shows he’s got the kind of chutzpah needed for the modern music industry. Born to Soviet immigrants, Heifetz found an early love for music and poetry and ended up studying Literature at Yale before setting out to find his songwriting ways. Elliah Heifetz’s indie folk style has a heartland feel (despite the Brooklyn zip code where the tune was probably penned) and his narrative approach on the lyrics serves to strengthen that sense of earnestness. “You Shall Be a Blessing” is the debut single from Elliah Heifetz and we’re hoping there are many more yet to come.