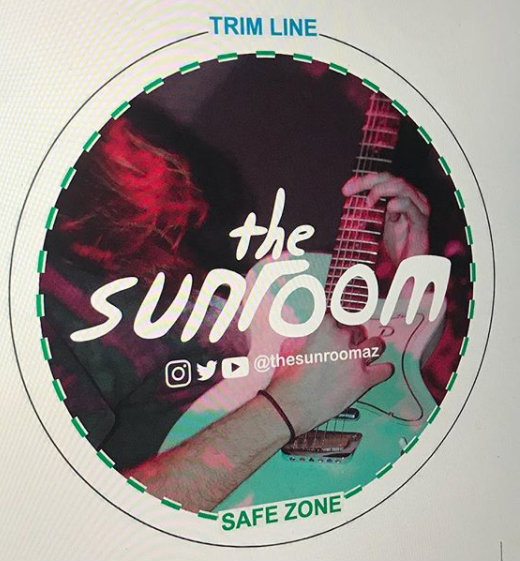 The most organic artistic spaces are always only half-planned and The Sunroom is no different.

The collective ‘collected’ two years ago when a group of four friends moved into a house in Tempe. Andrew Robinson, Alex Gross, Daniel Vogt, and Mario Esposito grew up together, and during their adolescence they attended shows in what they called, “the Tempe House Show Circuit.” There was a casual agreement between the four of them; if and when they moved in together, they would become part of this circuit.

What started as a loosely defined pact has become a concrete reality. The Sunroom’s house shows are steadily becoming a staple of the Arizona music scene. But the Sunroom is more than a prominent DIY venue. Along with videographer/editor Pete Magine, the four inhabitants at the Sunroom have started filming a visually stunning series of live musical performances. These performances feature great music, meticulously designed sets, and interactive video projections.

I had a chance to sit down with the four roommates and discuss media design, group aesthetics, and squash. 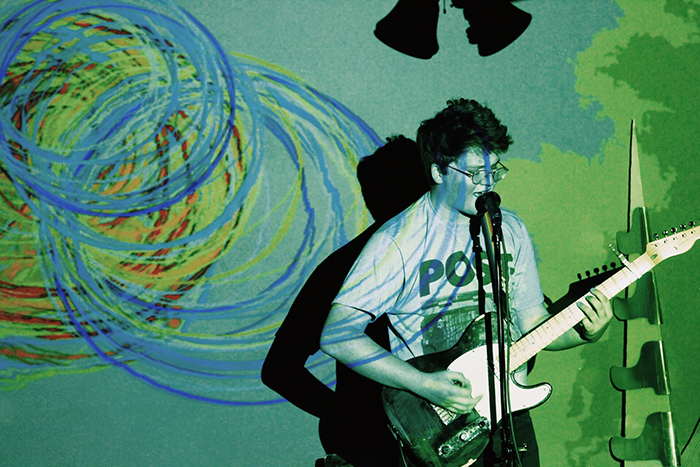 All photos courtesy of the Sunroom

Jacob for YabYum: You guys cited Odd Future and Brockhampton as groups you appreciate saying you admired their cohesive aesthetics. What is the aesthetic of the Sunroom?

Mario: I don’t know about our general musical aesthetic. It isn’t exactly centralized or focused to anything in particular.

Alex: It is kind of all over the place, like even the bands we’re in don’t sound like each other. Some of the music I make is dark, industrial dance music. Loveyourself, which is the band Mario is in, is more like post-pop-punk. I guess the only cohesive thing is we’re all the type of people who wear jeans in the summer…I also think the words organic and friendly are adjectives you could use to describe us.

That’s what I was going to follow up with. If there’s not some sort of genre or musical identity that ties your projects and the bands you work with together, is there some sort of personality or attitude similarities you all share.

Mario: I’ve always said we were semi-friendly. I feel like a lot of people have said about us in the past [pause] we’re sort of cliquey.

Andrew: Well it’s not like we’re excluding anybody, but some people have had that perception. We have a strong, core group, and people have been intimidated. They think we’re tight-knit, and closed off.

Mario: I think it’s because we don’t go out of our way to really be social in every situation.

Andrew: I think we’re pretty friendly! Especially recently. Another defining thing we all share is we are all really silly. I feel like dumb inside jokes are really important to what we do. 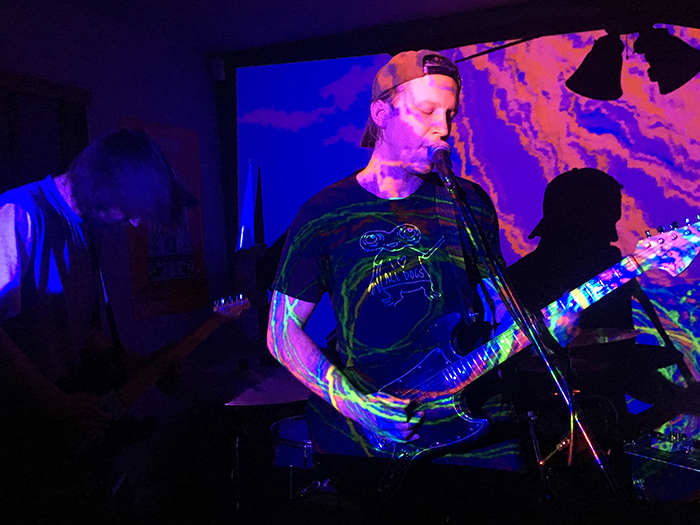 I’ve often heard your shows and your videos described as trippy. Personally, I’ve never liked that term because it could imply something accidental, and the stuff you guys do seems really well planned. Do you guys see a difference between the term trippy and maybe something like psychedelic. Is there a term you prefer?

Andrew: I mean, I think those are both really cool adjectives. When people tell me some projection I’ve made is trippy it’s usually a good sign because I think they mean it has a quality beyond digital–as if it’s moving in an organic and unexpected way.

Mario: I think if we had to use other words, they’d maybe be abstract, or surreal.

Alex: I think on some level psychedelic might not be the best adjective, because not all of us are involved in psychedelic culture. It makes sense aesthetically, but it doesn’t definitively represents group. But overall, I don’t see any negatives in using those terms.

In the latest video with the band Herbert Walker, you guys had a reactive light set up, was it triggered by the snare drum specifically?

Andrew: It was actually triggered by all of the audio, but the snare is much louder than everything, so it triggered the lights the most.

Got it. So how did you set that up? How did you achieve that interactivity?

Andrew: My specialty is interactive media, so all of the videos before the Herbert Walker one had some kind of element of interactivity, but it was only in the projections. For the lights in this video I got this DMX dimmer which controlled how much voltage was sent to the lights and then I wrote some computer code which mapped the incoming audio to the lights. So the louder the band was playing the brighter the lights would be.

I’m assuming that took a lot of work.

Andrew: [laughs ruefully, contemplating the time he dedicated to the setup…]

Andrew: Hmm. That’s a good question. First off, I think it adds a lot to a show. Having interactive elements in our house shows takes them to the next level. When the audience members realize the projections are moving with the music it’s usually mind blowing for them. Watching a static image for 10 minutes and then seeing it go crazy soon as the band starts making noise–when people see that connection it’s just [pauses, searching for the word] it’s cool.

Alex: I think it adds a lot of personality and character. I’ve never been to another DIY show that does anything similar. It’s a good way for us to stand out.

Alex, you handle the set design for the Sunroom videos. What is your approach to building the sets since there are so many digital elements to account for. How do you use the tangible elements to balance everything?

Alex: Well there are moments where it feels like we might have too much stuff going on. So it is about trying to balance and not…overwhelm. It’s important to find little details that are interesting, but aren’t overpowering, or fighting for attention. It’s also approaching each video as its own thing. For Go Outside’s performance, I wanted to incorporate a lot of natural elements to fit with their imagery. For Hypercult, I built those LED towers that were mapped to the MIDI, because I wanted this weird, future, grungey aesthetic. It’s all about enhancing the digital elements instead of clashing with them. 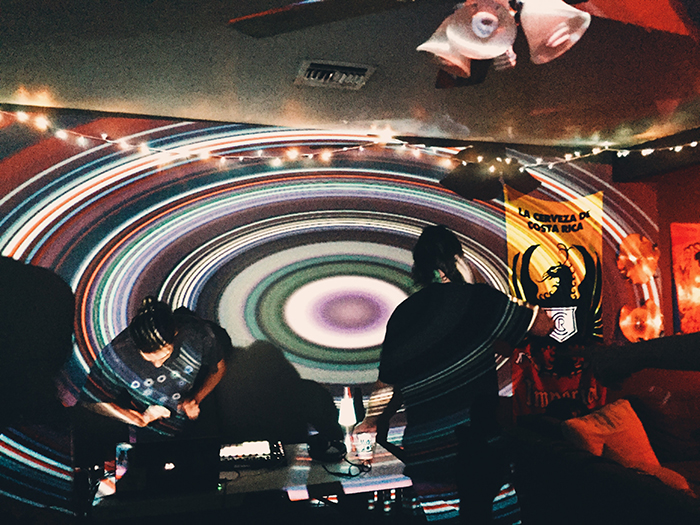 Andrew, this question is specifically for you. You do projections for live shows outside of the Sunroom, including a lot of Playboy Manbaby’s shows, and some events at ASU. What is it like being at a show where you’re having a significant impact on the experience, but you’re sort of an anonymous member of the crowd.

Andrew: Honestly, it can be pretty nerve wracking. The first show I did live was Playboy’s last album release show at the Trunk Space [Feb. 2017], and I kinda messed up the beginning. I spent days preparing and everything was perfect. They came to me the day of the show and said they wanted me to do a reveal, where I would cover the projector up and then uncover it right when they started playing. Which is easy, so I said it would be no problem. Except when I went to uncover the projector I accidentally knocked it over and the image went all over the place. It looked really unprofessional. I felt so bad. That’s kinda the challenge; if everything goes smoothly, people think it’s cool, and they just kind of accept that it works. But if things go wrong, your mistakes become the thing everybody is focusing on.

Last question. Do you guys ever worry about being bad neighbors?

Andrew: We really try to be respectful.

Alex: In terms of noise, we think we do a good job of being quiet, but I don’t know if we actually do. Because we were jamming the other night, and the band DREAMERS happened to be eating at the Thai restaurant next door, and they heard us and they thought we were having a show, so they knocked on the door and we hung out all night. So I think we might be louder than we think.

Daniel: That was such a cool, random thing. Our band [points to Mario], Rival Coast, opened for DREAMERS like a year ago at Tempe Marketplace, and it was probably our biggest show to date. Then a year later, by some coincidence, they’re just eating Thai food next to us and happened to hear us and come over.

Mario: The neighbors over here [points North] are pretty cool. They work at Taco Shack and have bonfires a lot. And then nobody really stays in this house [points West] for long, so we haven’t had any issues.

Daniel: Oh I forgot to tell you guys! [Those neighbors] offered me squash from their garden yesterday.

Did you take it?

Daniel: No, but I should have.

Mario: No you shouldn’t have. Squash sucks.