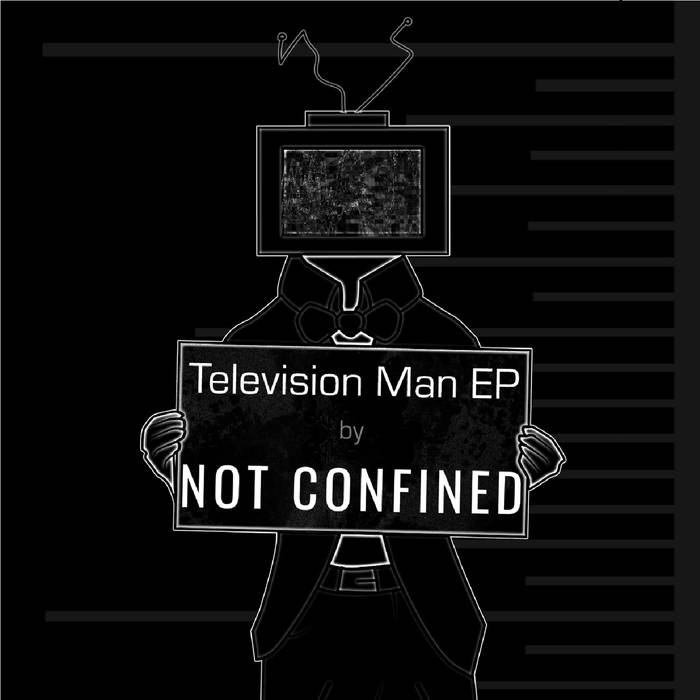 Since I attended their feverish album release show featuring sets from a slew of local mainstays, Not Confined managed to stab their way into my heart with their unrepentant attitudes and hardy yet good-natured stage presence .

With my trusty bong in hand prepared to type this review, the only thing separating me from reviewing our own hometown’s Not Confined and their newest EP Television Man was my crippling anxiety and my coping mechanism, [adult swim].

While I enjoyed the selections I heard from their EP release set, it is incredibly refreshing to get a proper listen to the band in a studio environment. My love of music in live settings knows no bounds, but any fan of sound design can admit the unfortunate limitations local venues typically befall in architecture, equipment, and cost. Their set at The Rebel Lounge had quality sound, but the licks found on Television Man have plenty of “blink-and-you-miss-it” moments you might miss in the world of live music.

The digital edition of Television Man begins with the short-and-bitter “Dead Reputation,” which introduces vocalist Bailey as an individual crossbred with the anger of Alanis “You Oughta Know” Morissette and the staunch one-liners of Nina Simone during her dark “protest” years. The punctuating moment of clarity for the aim of the EP comes from the rhetoric of “Do I know who I am? Fuck no!” Even in their name, the band is quick to honesty about their life experience, which makes the ride all the more smoother in a world of know-it-all cynics.

“No Coincidence” enters the scene with a more playful zeal and a clear display of drummer Michael and guitarist Jake. With a guitar riff that reminded me of some hazy-day punk music video, this second track features a few fun, call-and-response vocals and assorted harmonies which help round out the acerbic tempo the lead vocals were written in. Vocalist Bailey retains the enthusiastic intensity displayed on the first track, but the pacing of vocals and the lyrical choices prove a challenge for breath control at the end of phrases.

“Out Of Control” brings back stronger diction and a brighter sound than the first two offerings, playing best as a “party” track to get the room going. Clocking in at a short 1:43, Bailey uses their short-but-sweet time to explore unique vocalizations, while bassist Torri and guitarist Jake play with a melodic style. This track on the EP acts as the midway point by introducing a light-hearted sound to their blunt lyrics. After Bailey closes “Out of Control” with an impassioned battle-cry, “Entitled” proves why it is a highlight in their live performances.

Not Confined brings on the suburban angst shared in common with many bands who form in the outskirts of the Phoenix metro area. Although they never call out their specific target, “Entitled” is much less your usual middle-class hate track and more of an attack to the specific behaviors which cause the inspired title. Ambitiously making this the longest track on the EP, “Entitled” features some sweet guitar licks from Jake with Bailey repeating the chorus line “It’s time to find the time of letting go.” While they decry the behavior of those who are entitled, the redemption for change is never lost.

“FUK82” amps up the temp for the second-to-last track and puts their heady attitude to the test as Bailey husks up their vocals and Jake and Torri give the track a little ska-punk fusion. Compared to “No Coincidence,” Bailey handles the faster tempo of the vocals with ease as the guitar and drums blend seamlessly behind them.

The Television Man EP comes to a close with the title track and acts, in spirit, as the perfect companion track for “Dead Reputation”. While the first track of the album begins with the narrative of “self vs other,” “Television Man” neatly ties the work up by presenting a 1984-esque “self vs society” lyrical theme, also tying up the origins of the album cover. “Dead Reputation” chooses to address the discriminating person with indifference and angst, while “Television Man” delivers the proper “fuck-you” to society and rounds out their vision.

Not Confined comes out of the gates with a solid start by strengthening the messages and image of their live show and displaying a clear connection between their work on stage and in the studio. Although their youth on stage may convey a less world-weary theme than a Tom Waits tune, the band brings their intensity together as a needed wake-up call to the young who wish to fall in line with society and end their life at 30.

Television Man isn’t telling us anything we don’t already know, instead it’s kicking our shins for ignoring the problems right in our face this entire time.

For more info on Not Confined, check out their website. You can catch them perform at The Rebel Lounge on Sat. June 16 with the School of Rock Sugar Skulls, The Joeys, and Plants After Dark and also opening for Sponge at BLK Live on August 1. 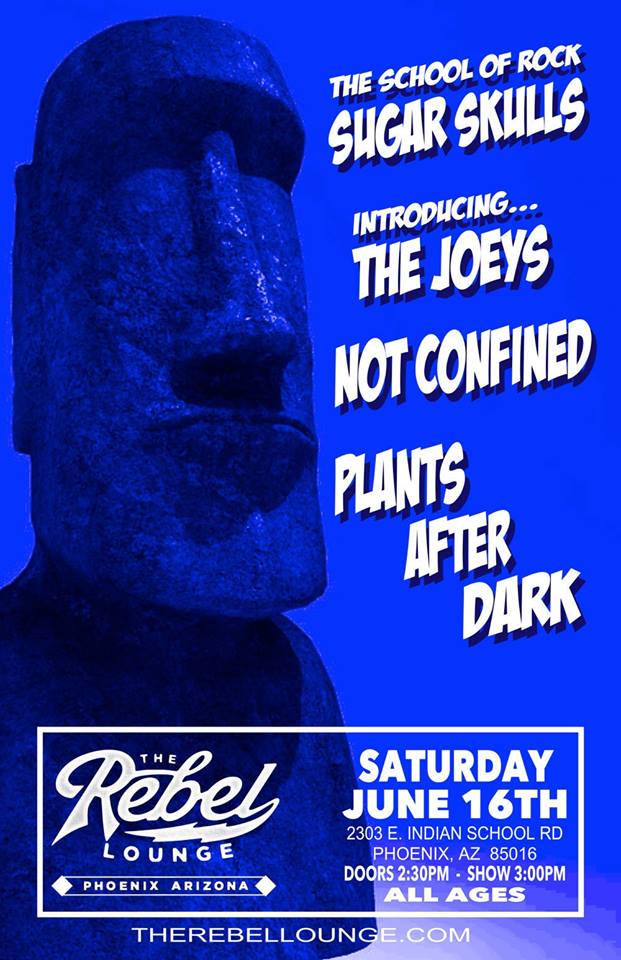