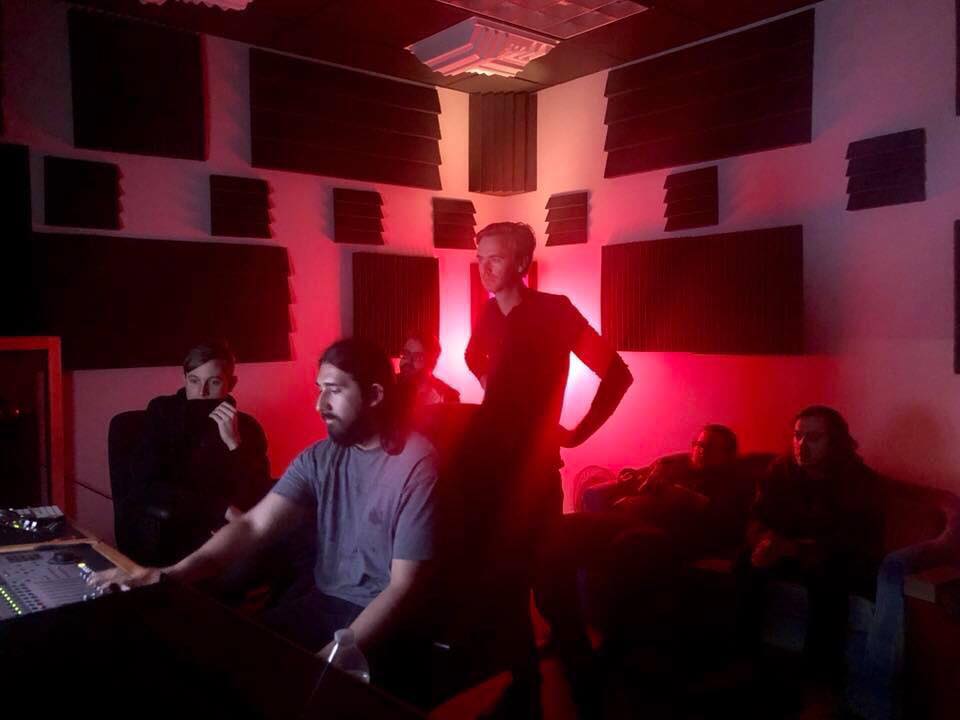 Josh Medina is a remarkably talented audio engineer. He is also the Kevin Bacon of the Arizona Music scene. If you’re in a local band, odds are you’re not more than two degrees of separation from Josh; either you’ve recorded with him, or you’ve been in a band with someone who has.

Josh has been making records in Arizona for almost ten years. In the decade since he started, he’s done albums with local stalwarts like Goya, T.O.S.O., Instructions, and Playboy Manbaby. When he is behind the console, he is a man of few words, content to use his calm demeanor to pacify any tense situations that arise during the recording process.

But just because Josh doesn’t usually say a lot, doesn’t mean he doesn’t have a lot to say. Which is why I was so excited to hear him reflect, quite poetically, on his career thus far.

Josh Medina: Oh, absolutely. Especially when you’re like me–heavily introverted. It’s very difficult to manage people. Every band is different. And I’ve definitely found it difficult at times to relate to people. I mean, I am who I am, and I try to keep it fun, chill, and relaxed, but when I get a band full of really eccentric people, I feel like, “Ah, shoot! I gotta really try harder to keep these people entertained.”

Oh, yeah, yeah! To be honest that’s a bit of an inner conflict, ’cause once again it stems from my insecurities as a person… socially speaking–since I am so introverted. I do enjoy being around people, yes. I just don’t enjoy being the center of attention at all, ever. I would much rather shine the light on someone else so that it stays as far away from me as possible. I’m not perfect at that either, but I try my best, and I think that’s where I excel [as an engineer]. I make sure it’s not about me at any point. The best thing about this job for me, is making other people happy. I like seeing people leave feeling better than when they walked in.

Do you think you have to like people to be a good engineer?

Well… I think any job where you’re working with people you have to like people. It would be really hard to do [this job] without that. At the very least you have to love the idea of an artist. But, yeah, I can’t see how anybody could do this while having trouble liking people. I think it would be pretty impossible.

You don’t have to name names, but is are there any notoriously cranky engineers you know of who don’t seem to like people?

I think every local scene kind of has its people that develop reputations over the years as being one way or another. And to be fair, I think a lot of that is based in the hardships of the industry itself. I am just as susceptible, you know I could be that guy in ten years. Maybe the job beats me down and I turn into a grumpy old haggard. That’s totally possible. I think anybody who does fall victim to that reputation, it’s because of the hardship and the turmoil of this job. It’s easy to lose focus and become dispassionate. I try to keep myself honest and stay aware and if that ever happens to me, I hope I walk away. Because that’s the nasty side effect–you start to outwardly express yourself in a negative way. You treat people poorly and everything suffers.

As an engineer, I’m sure you’ve had a lot of requests to make things sound “vintage.” Why do you think people are so bent on recapturing the past?

The same reason people in the past wanted to capture things perfectly.

I think the basic level of it is we want things we can’t easily get. I think that’s where it starts. In the past, when things sounded the way they sounded, by technical fault mind you, they were searching for perfection. They wanted cleaner things. When you talk to engineers that are 50 and older, they’ll tell you “What are you doing bothering with tape machines? What are you doing bothering with all this equipment that’s gonna break?” But then you talk to younger people that grew up with devices that could capture things very cleanly, and we think [that stuff] is all sterile. We want character and color. Ultimately, we chase something different from what we find easily.

Do you think the pursuit of these sounds, just for the sake of doing something difficult, is misguided? Do you think it limits people at all?

I’d be lying if I said I didn’t listen to records which had that sound. Even modern records which were purposely designed to sound that way. I do enjoy them. I try not to think about it now, just like I don’t think about analog vs. digital or any of that stuff. Whatever makes you happy, and whatever gives you what you want, ultimately that’s all that matters. I don’t think it ends up hindering anybody.

Is there a record you wish you could do over?

[Laughs] I don’t really consider myself a pro, yet. I know other people might look at me that way, but I don’t think of myself that way. So in a way, every record. I haven’t put out a record where I’ve thought, “I really nailed everything on that.” And maybe that’s just how I’m going to feel until the day I die. Of course some regrets are smaller than others.

On some records, I look back and think, “I really wish I would have done one small thing differently,” and other ones are like, “Whew, that shouldn’t have been released.” But there is probably something on every record I wish I could do over.

Last question. Who is a person, or what is a situation, that doesn’t have anything to do with music or production, that taught you the most about being an engineer?

It would probably be my ex-girlfriend, or family, or friends explaining…man, it’s hard not to make it about music. I think watching the way people feel music, which deals with music, but I think it’s the furthest away I can get from it. Other people relating their experiences with music to me has allowed me to shut my brain off, put myself in their shoes, and say, “Ok, I’m freaking out too much about this sound or that frequency.” It kind of keeps me in check.

Having insight into, “This his how people who don’t do this for a living are experiencing a song” has taught me a lot. In many ways, the way they experience a song is more important than how I am experiencing it. That’s the closest I can get to answering that question without spending a long time thinking about it.

To be fair, I think you may have already kind of answered that question when you said you’ve used your experience in previous relationships to find new ways and reasons to love your job as an engineer.

Yeah! That’s a better answer, so we should roll with that one.