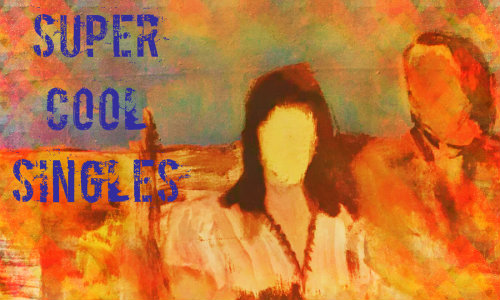 The garage rocking femmes known as The Darts are getting ready to drop a slick new vinyl 7″ next month in a collaboration between Alternative Tentacles Records and Dirty Water Records USA. The two-track release features the song “Bullet” which the band released in prelude to the 45. Altrock guitars create a wall of sound while the organ incorporates a hip retro-psych feel on “Bullet”. Pre-order the Subsonic Dream b/w Bullet 7″ (on yellow vinyl) from The Darts today through Bandcamp. The release is, after all, limited edition.

This trippy single from Polyan (fomerly Polyan & the Johnson Sisters) came out on the band’s LP last Autumn but I feel the track has a summery sound that will definitely be enjoying some frequent replays on my seasonal playlists. This L.A. act has a grungy sound, but in the way Modest Mouse is grungy, and their sense of movement brings to mind the somewhat disembodied feel you get with Panda Bear. If you dig “Ruby” like I do, I suggest diving into Lonely Bologna, the complete LP from Polyan, available through Bandcamp for preview and purchase.

The highly stylized indie rock of Mr Gabriel will have you riding a 1960s Mod vibe right through your workweek. “Tambourine” is a buoyant, Gary Glitter-inspired number that will make you shake your moneymaker long before you realize the song is actually about taxes. Yes, folx. Taxes. But, if the tax man has you down this time of year, Mr Gabriel will flip those feelings around with this “light hearted [sic] fuck you” to Uncle Sam.

New Jersey songwriter Seth Carpenter makes music under the moniker Bucolic and, as such, he released a new EP in April. “Dendroid” is the closing track from the whimsically titled Glow Worms. That sense of whimsy branches out through the song’s pastoral imagery and spirited sound.  The lo-fi indie sound of Bucolic intentionally keeps to that borderland between pure and puerile. A feeling well-matched to the lyricism. You can give “Dendroid” a spin below, but then head over to Bandcamp to check out Glow Worms in its entirety.

What is up with this awesome psych rock? Is it like a little present just in time for the hellacious moodswings of summer about to hit Phoenix? Whatever the reason, I’m about it. Disgusting Beauty brings its brooding brand of retro psychedelia to us all the way from Germany. The psych-punk duo based outta Berlin has a real 21st Century Jim Morrison thing going on that really shines through on “Mad Dog”. This track comes to us from Disgusting Beauty’s latest s/t EP which dropped in April (and is available on Spotify).