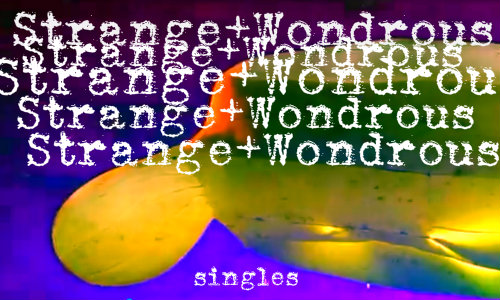 RPM Orchestra cooked up something special for their new two-track Onus Records single including this new personal favorite from the camp, “Hey You”. The experimental orchestra perhaps best know for their innovative silent film soundtracking at Filmbar even created a visualizer (as the kids would say) to accompany the new track in proper RPM Orchestra style. Jocelyn Ruiz provides the vocals and lyrics that are just the right amount of eerie. Ruiz unleashes that untamed edge as the instrumentation builds into some sort of wild circus. More than just a frenzy, there’s a rustic quality, a rawness, that lends the flurry a mystical aura. A primordial carnival.

There’s a brooding air to this new single from the artist known simply as Jimmy. That might have something to do with the gravity of the topic addressed within the narrative of “Smile”. The follow-up to Jimmy’s s/t debut single, this trippy new number takes an intimate look at the opioid epidemic happening across the nation. The music moves from a serene and somewhat hallucinatory soundscape to more brutal moments and then back again. What really hooked me in with this track is the completeness of the narrative, and the dynamic motions of the music accompanies the story in cinematic style. Give Jimmy a listen.

LETRONZ is the musical persona of Phoenix producer and songwriter Braden McCall, formerly of  The Holy Coast. “Wait4U” starts off pretty chill before the soundscape shifts into a bit more tumultuous terrain, just to keep things interesting, before returning to its dreamier state. The three acts of “Wait4U” fit together seamlessly as the sounds build and disintegrate. If you dig this track, hop back to 2016 (on Soundcloud) and check out LETRONZ’s debut s/t EP.

LP Giobbi received training in jazz piano from UC Berkeley before moving to Los Angeles to achieve “synth warrior goddess” status. After meeting Tucker Halpren and Sophie Hayley-Weld from SOFI TUKKER, the trifecta began to give shape to Animal Talk Records. “Amber Rose” is the debut single from that label. Borrowing a line from Hermixalot’s 2008 poem, LP Giobbi gears up to “Amber Rose on these hoes” over a funky bossa nova-inspired backdrop of dance music to amp up your attitude before you hit the club.  I’m excited to hear what more might be coming out of the Animal Talk camp in the years to come.

Often, when entering the realm of ambient eletronica, the music carries a cinematic feel. It’s trying to convey an aural, not oral, narrative. The artist known as UnknownArtist sends us into a bit of a chicken-egg paradox with the creation of “Jump Cut / The Broadcast” with its accompanying music video. Did the story for the video come first? And, if so, is this not a soundtrack? And, if not, was UnknownArtist thinking of the visual elements when constructing the sonic atmosphere? Or, did the two spring forth together, fully formed, like Athena from the head of Zeus? Basically, I have questions.