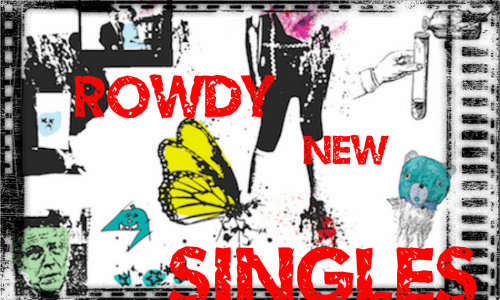 The first single from Shovel’s forthcoming LP has all that fiery energy one gets at a live Shovel show. This punk two-piece from Phoenix packs the punch of a full band experience and fans should be excited for a new take-home experience, It’s Fun to Be a Nothing, which comes out on May 20th through Dirty Water Records. The new record will be released on slick blue vinyl and you can preview/pre-order the new album through Bandcamp. I suggest you get on that before this one sells out. If “Monty” is any fair indication of what to expect from the new Shovel LP, it’s going to be really fucking rad.

Low Cut High Tops is the music-making moniker of David Burns and this feisty new track marks his first single since 2016’s Eh, Whatever. “Typical” just might be my summer anthem. The ruckus, richly textured soundscape of chaotic guitars suggest Burns is backed by an entourage of flannel-clad rockers in his hometown of Seattle, but he made this one all by himself. “Typical” is super catchy so make sure you know that going in and allot yourself the appropriate amount of time before that first spin.

The rowdy rockers known as The Bellwethers bring blues-fueled rocknroll to the mix with their latest single, “All I See”. There’s a 70s “serious psych rock” vibe happening here that really riles up a bar full of vintage rock lovers. As it stands, The Bellwethers will head to Mexico in May to perform in Puerto Peñasco so you’ll have to try to catch them on the flipside, if you haven’t already. This Phoenix five-piece delivers on the energy, in person or in playback.

Ecstatic Union comes to us from another point along the psych rock spectrum. The band’s new single, “Neurons”, is something a little more retro as it reaches back to the verdant sounds of 60s psych, and also a bit more modern with its SoCal indie rock vibes. This single reverberates with psychic energy and performative power as you traverse through the candy-colored sounds of Ecstatic Union.

This Delaware trio busts out the fuzzy garage rock to amp the femme angst on their latest “moody tune”. This single comes to us from the band’s soon-to-be-released debut EP, Gutterbawl, which is due out on May 15th. Eyebawl has a grungy kind of sass on this single and “Prom Queen” could have been the anthem of a teenage Marla Singer. I’m definitely going keep watch for Gutterbawl next month.