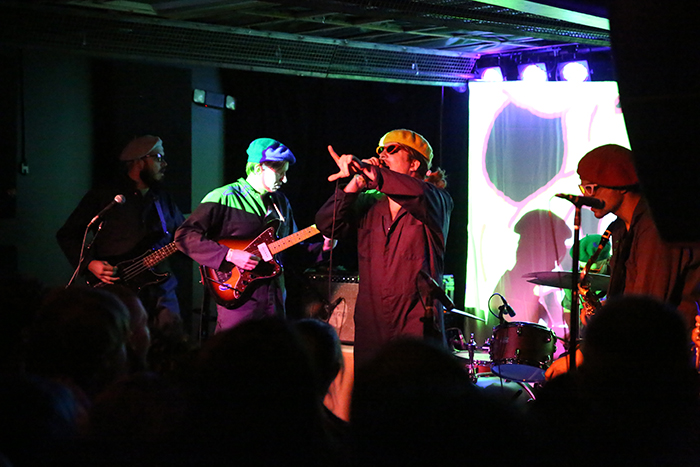 A bubbly mixture of feelings set in regarding my attendance to the album release show of three seperate bands — Playboy Manbaby, TOSO and Not Confined –along with Exxxtra Crispy at the Phoenix-based Rebel Lounge, but one thing was certain: these bands had the heart of the local music scene resting in the palm of their hands.

As my photographer and I packed into the dimly-lit venue, my first surprise was the diversity of attendees spotted around the room. With a nicely formatted space dividing the 21+ area (yay booze) and younger sections of the crowd, I found it a fun pass-time to people watch and get a deeper sense in what the audience was about. This was easier said than done, since my photographer wore heels to get good shots over the crowd, and effectively made it harder for a portly journalist and his stylishly chic photographer to blend in without towering over the other fans.

With the crowd comprising of budding punks, local scene veterans, and one weird lady writing on a yellow notepad in the corner before anyone was playing, I deemed myself intoxicated enough to nestle into a nice spot on the side of the stage. 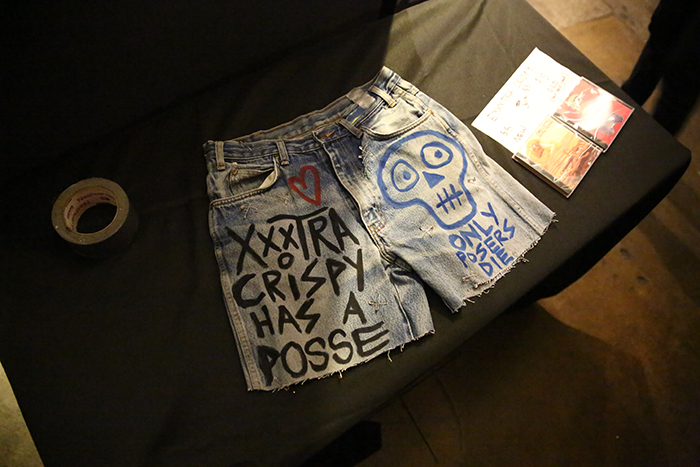 With the Exxxtra Crispy merch table proudly showcasing homemade shorts with incredibly aggressive slogans, I was both shocked and enlightened by the polar sounds of their style. Armed with a trombone, sax, and the normal slew of rock band instruments, the initial shock from seeing horns prominently displayed in the mix acting as rock instruments turned that feeling into pure admiration. 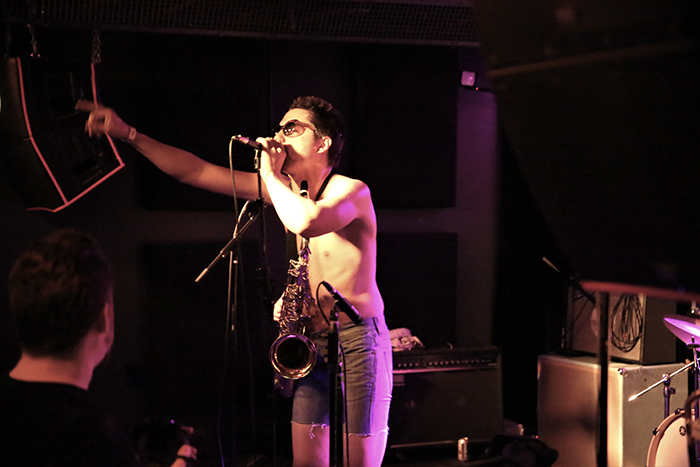 While they were listed under the “special guests” category, opening songs like “Brain Salad Surgery” and “Andromeda” proved them to be capable of being the perfect headlining party band. As much as I can’t comment professionally on their musicality, every member proved they were unapologetic performers at heart throughout the set. 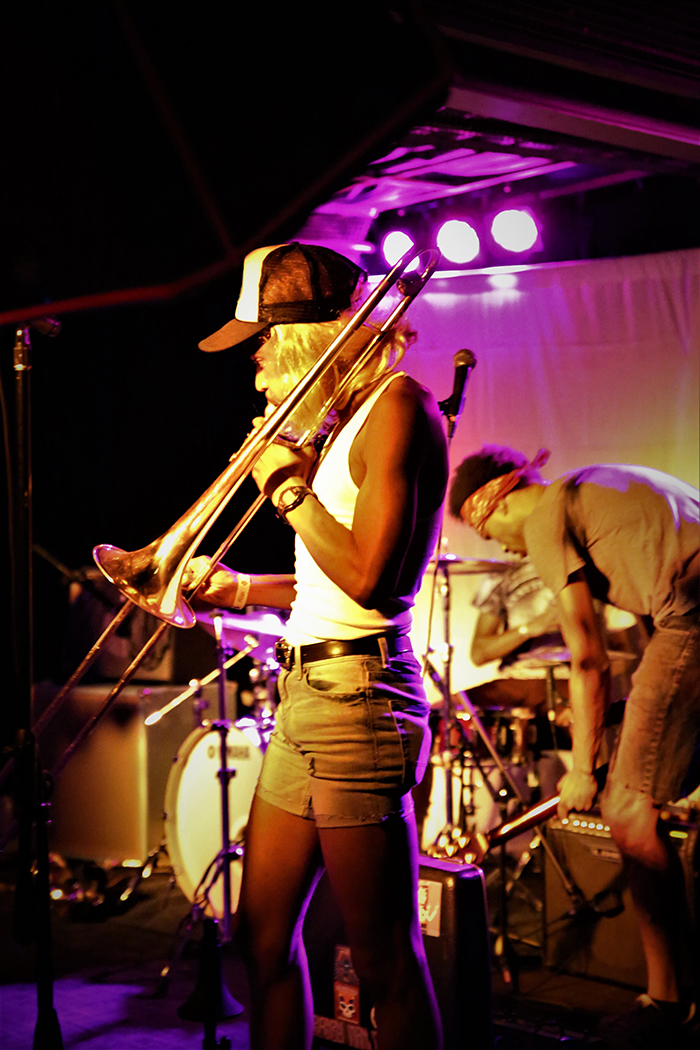 With needed little to get the crowd going and only exuding pure energy, there were plenty of youths who took to their matured sound and musical capability. Have you ever seen someone play a sax solo like a guitar solo? Make sure you order your sandwich “Exxxtra Crispy” next time.

By the time Not Confined took the stage, I managed to find my way to the bar in-between all the battle jackets and sweaty anticipation. As the gin and juice managed to settle in my empty stomach, the mixture of nausea and heightened effects from my medication told me I was ready for the next set.

For a group comprised of what seemed to be young punks between the ages of 17 – (maybe?) 22, the humility of their on-stage banter and thankfulness to their loyal fans were refreshing to the usual on-stage persona of the cocky frontman who doesn’t give a fuck what you do. 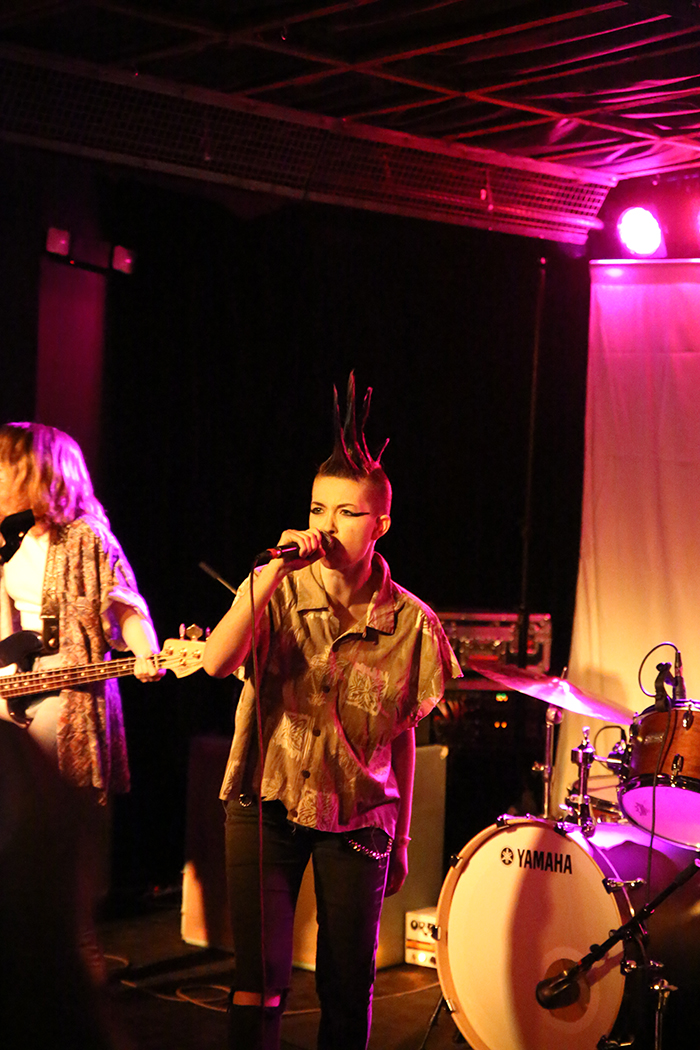 The vocalist of Not Confined displayed cool confidence in their lyrics based upon 21st century social activism and didn’t shy away from the harder topics on songs like “Object of Society” and “Entitled.” With a “blue-steel” type stare that would penetrate any Fox News anchor facing the loss of advertisers, their properly mohawked and jean-clad vocalist possessed the same disconcerting honesty as Fiona Apple in their performance with the entire band reflecting that vibe; these are the type of people who would accept you with love regardless of your style and life path, but don’t even try bringing out old-school prejudices and tired world-views. 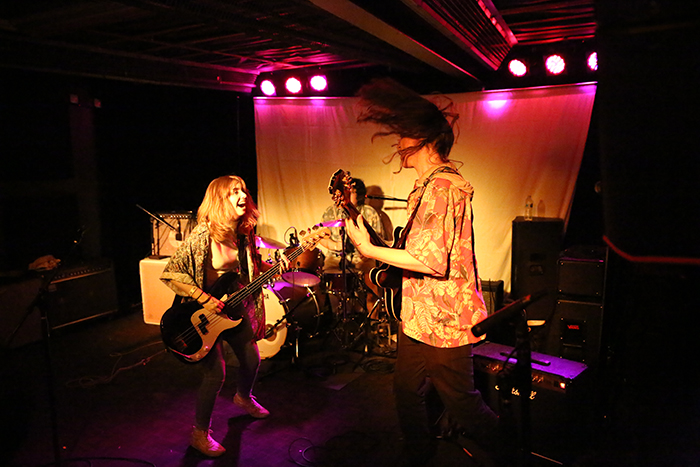 Not Confined is the modernized, musically political answer to punk bands stuck in circles talking about dead socialist thinkers and LSD-induced visions of society. 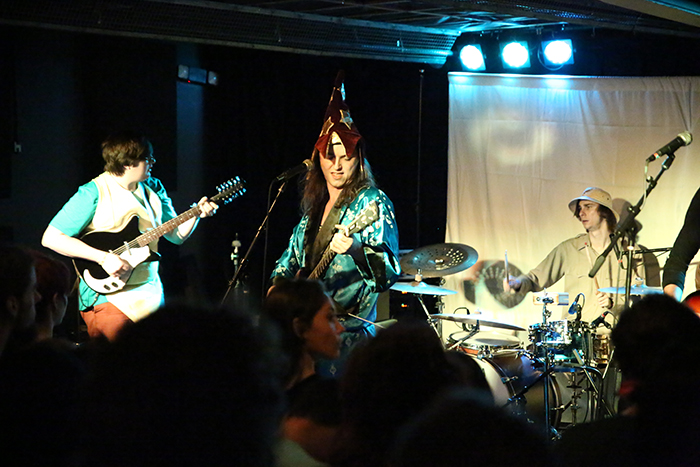 With my adrenaline charged from Not Confined, I immediately needed a solution for this rush before the next band and took a quick break on the smoking patio to emulate sardines in a can. Before I caught TOSO on stage, I truly didn’t expect this level of showmanship I was about to be exposed to.

While every band puts in a certain level of care to their brand, there aren’t many acts I know who utilize interesting composition, costumes, and story line as much as TOSO does. Their musical abilities are more than good enough to bring on stage alone, let alone combining these elements with medieval outfits and some seemingly scripted lines refreshingly rehearsed and too good to be improv. 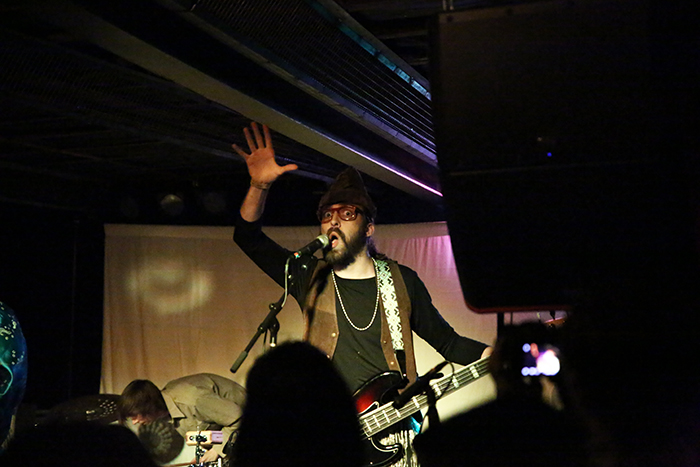 TOSO is a psychedelic mystery machine of theater and music you truly didn’t know you needed in your geek-consciousness until you get the live experience. Songs like “Planet Dumpster” and “Magic Boy” evoke narratives that could only come from a few fandoms and 10 tabs of LSD; and what’s wrong with that, folks?

Being a local mainstay and favorite, TOSO knows exactly where to put their creative guns and shoot them at just the right time. While frontman Zac White did enlighten the crowd with jokes and charisma, the true magic came out when each member played their respective parts in this confusing land of wizards and guitars. 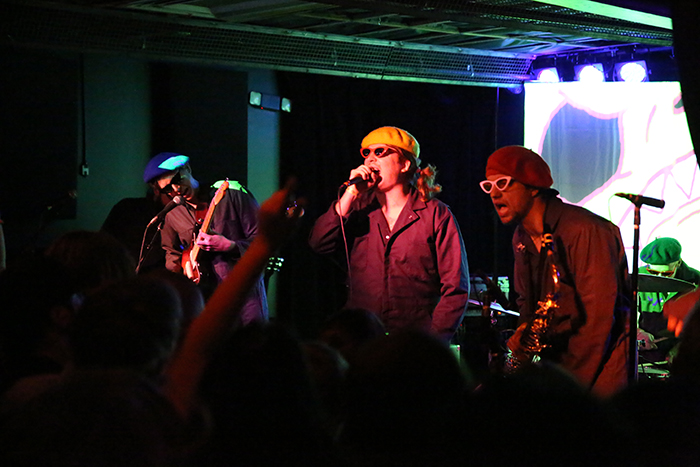 As the suspense for Playboy Manbaby mounted after the visually appealing energy brought by TOSO, my photog’s heels were beginning to give out and I could smell the speedstick in the air. Luckily for PM, they were no strangers to sharing their sweat and tears with the audience as well. With hats which made me reminisce to a few ska bands, that notion was quickly thrown away when their diverse ensemble played the first note.

The confident noises which bellowed from the bowels of vocalist Robbie Pffeffer flowed with the musical insanity donated by David Cosme on Trumpet and “Ricky” on sax. I don’t know where I’ve been mentally for the past few months, but clearly I’ve been missing horns in live mixes for quite a while.

As a complete package, Playboy Manbaby are a group of professional punks who insult the normies and inspire the masses with a heavy scoff at the word, angst; songs with titles like “Profit” and “Impatient” convey a deeper anger at the system most bands try to reach and evolve, but never get there due to repetition. 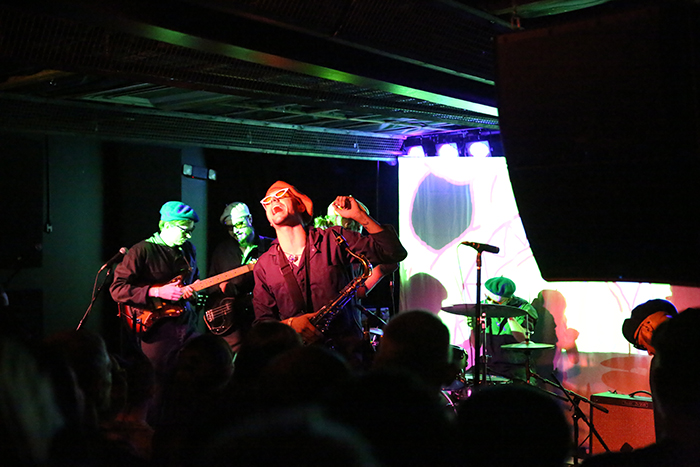 Their song lyrics do reflect irony and have a wicked sense of humor, but no performance of the night made me relate to my mid-20s crisis I was experiencing at the moment of writing. With the energy of an angry Helicopter-parent at a conference who possibly smoked crack in the 80s, I realized the energy of Playboy Manbaby had a purpose no matter how ridiculous their Facebook bio made them seem: intelligence can be found in absurdity, and there are many ways a punk can age gracefully in their lyrics and music.

Armed with an enticing intro video that only added to the performance along with an encore Sting would be jealous of, I can only hope next time I experience them sober with all my insecurities and anger in tow.

Populist Politics
Cadillac Car
You Can Be A Fascist Too 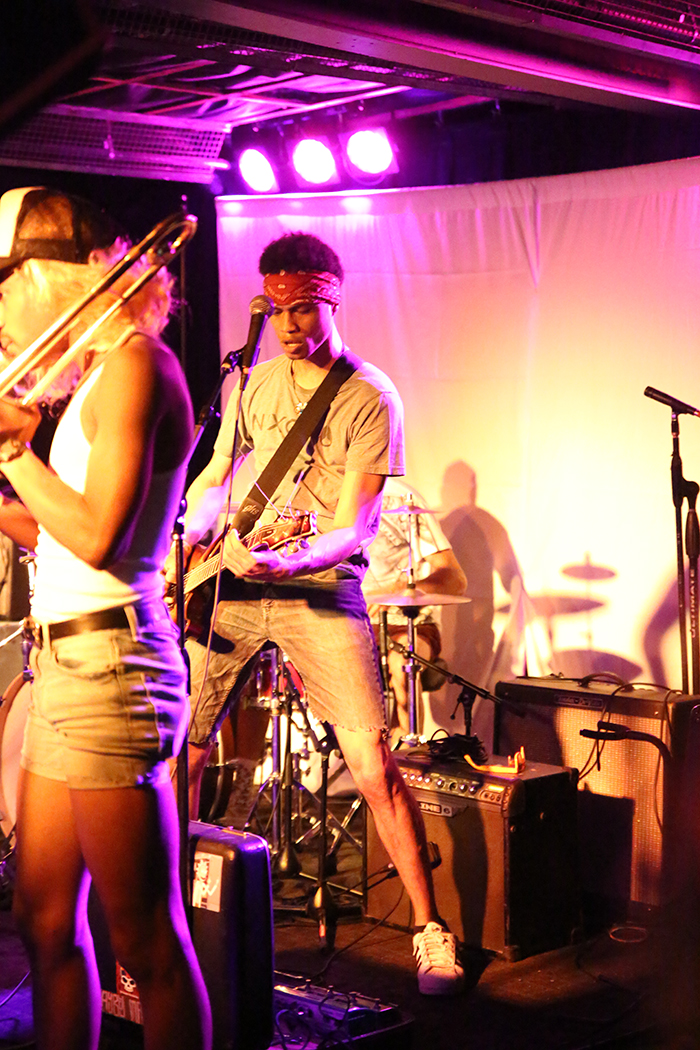 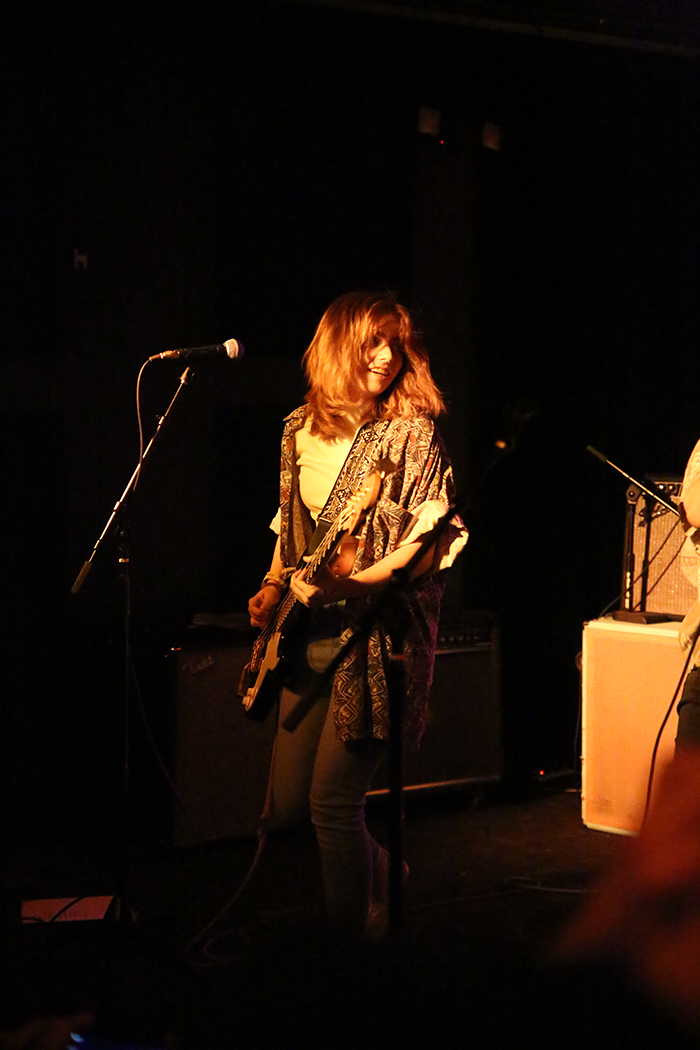 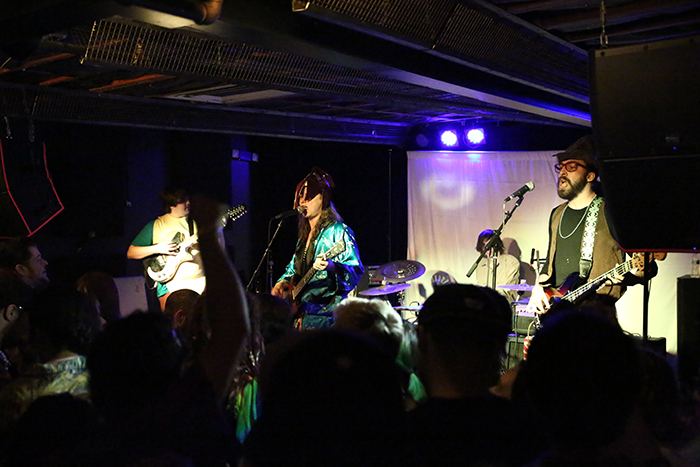 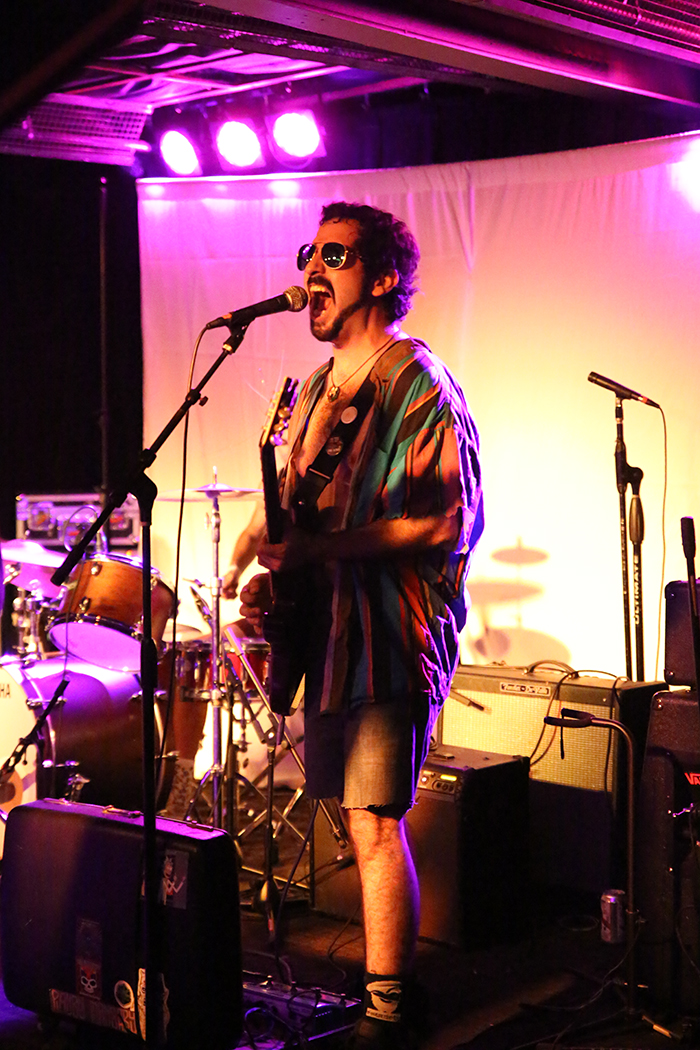 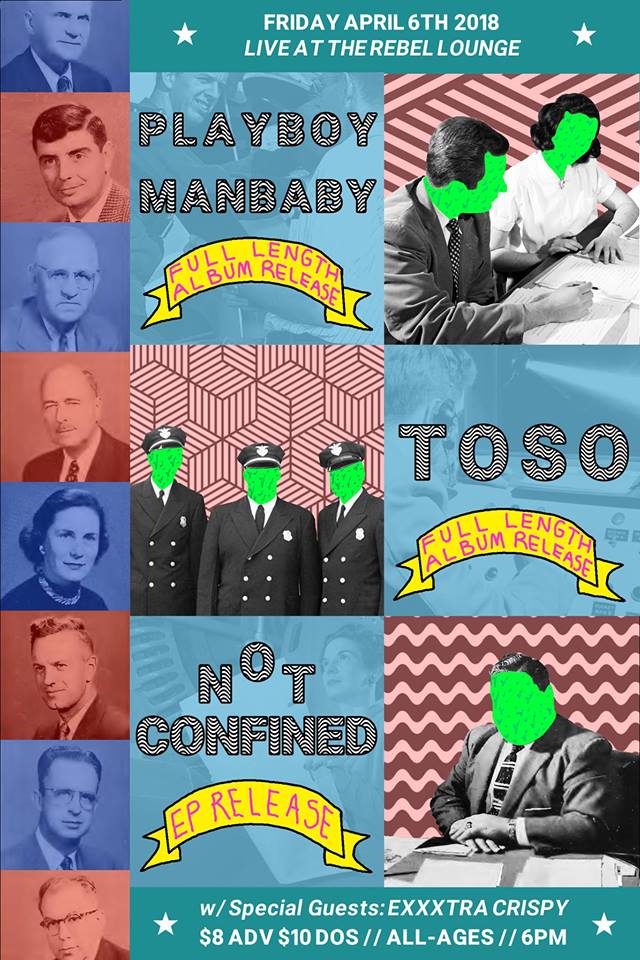