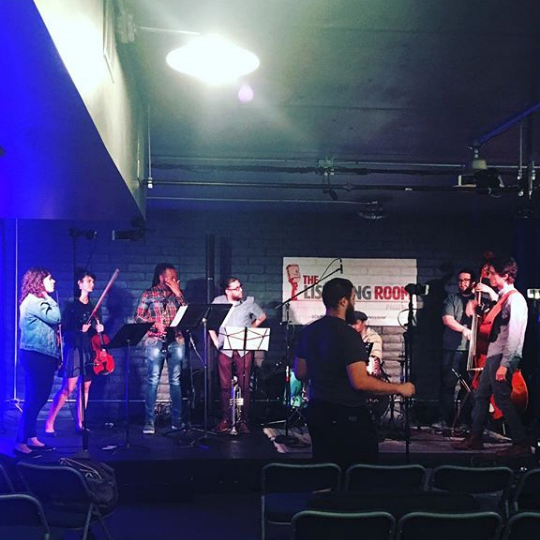 Plus, make sure you continue on below the video to our interview with guitarist/vocalist Perry Allen where he talks about his songwriting process, as well as what’s coming up for The Foster Family Band, including the release of their new 7″ record…

Perry Allen: “Masquerades” was written in spring 2017 and then Allyson [Wuenschel] worked on the arrangement through that fall.”I had been in the midst of an intense writing practice – for a year I was writing one song per week. Most songs were just sketches… a few of them stuck. This is one of those few.

It often manifests differently. Maybe with a lyric or two that inspire a melody, maybe a chord progression or rhythmic pattern that then develops. Taking time to edit and manipulate that rough sketch has been really important too. I love when a tune just comes out complete, but most of the time a few revisions need to occur (and sometimes playing the tunes live too) in order to reach a comfortable form.

Often inspiration swells and I am compelled to work on a tune despite whatever else I was doing at the time. That being said, I also structure songwriting into my regular practice.

This is an incredibly tough question. Lately, we’ve been leaning into so many folk works that the author is often anonymous – as well as listening to the breadth of local songwriters throughout the valley.

We have a new record , a 7” vinyl pressing, coming out soon! There will be a release show at Valley Bar, May 12 – it’s going to be a pretty special line-up, we’re really excited about it!