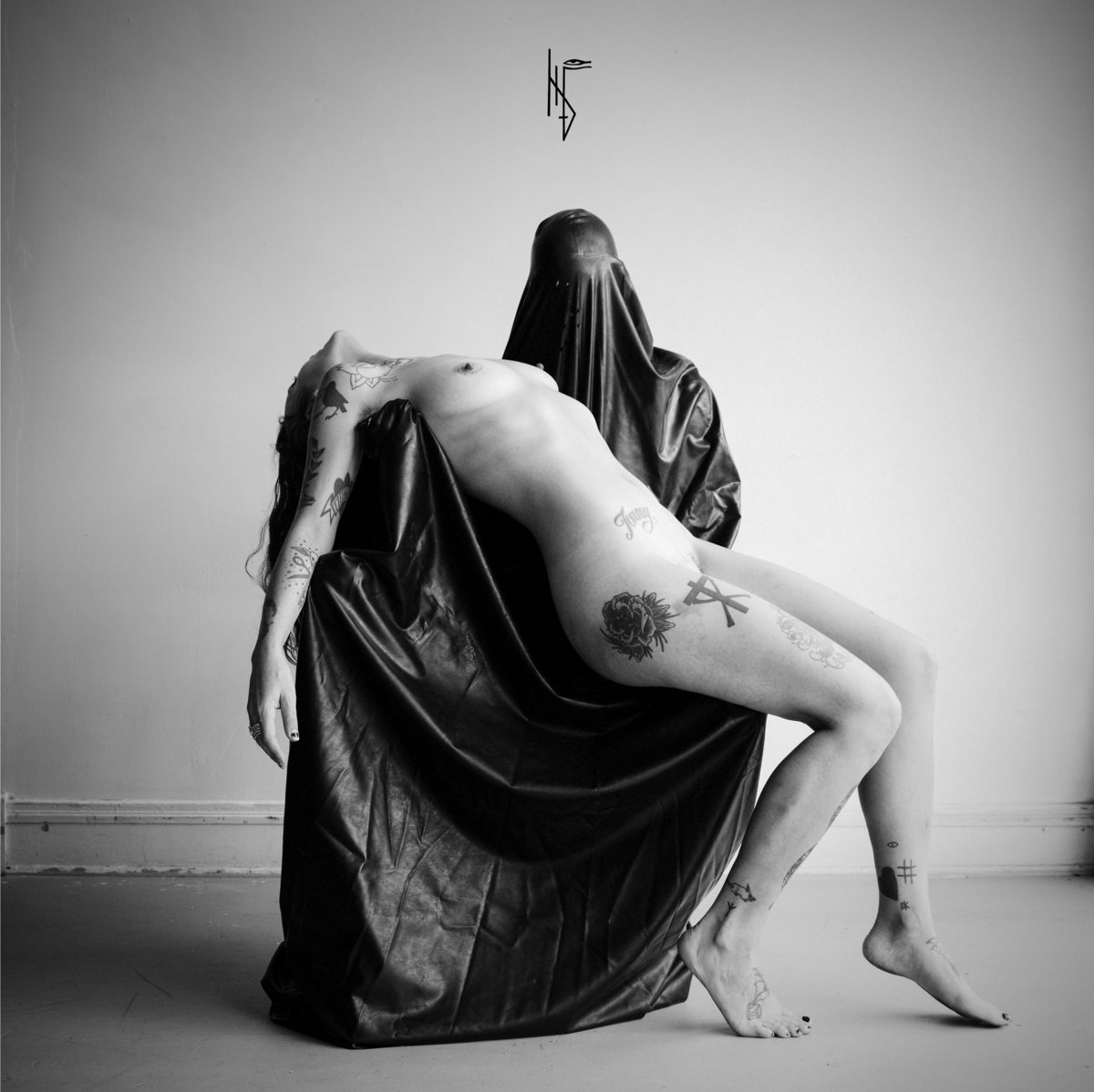 “Somewhere in these piles of shit I found heaven,” HIDE’s Heather Gabel snarls on their debut album. Castration Anxiety is a visceral piece of work: the sound of two people crawling through broken glass to get to somewhere better.

And for all the noisy textures, industrial stomping, and howling vocals on the Chicago duo’s 2018 LP, there’s traces of transcendent beauty and grace that reveal themselves through repeat listenings – a glimpse of Paradise at the bottom of filth.

HIDE’s Heather Gabel and Seth Sher have been active in Chicago’s warehouse scene, releasing tapes and unnerving audiences with their confrontational performances. Before starting HIDE, Gabel worked for years as a graphic designer for bands like Alkaline Trio, AFI, Rancid, Green Day, and Joan Jett.

For someone who’s spent so much time working behind the scenes, she’s a natural at creating them: taking the stage wearing burkas or scantily clad leather outfits, Gabel growls & screams on the mic with a feral intensity that makes Lydia Lunch & Courtney Love sound like kittens. Seth Sher uses his experience as a producer and experimental musician to give HIDE’s songs a crackling, queasy energy.

On Castration Anxiety, Gabel and Sher create the sound of a shotgun wedding between Throbbing Gristle and Crystal Castles. It would make make the perfect soundtrack for a cyberpunk horror movie.

I recently chatted with the duo about their “punishing and empowering” sound, their stunning album cover, and how they reacted to getting booed by Marilyn Manson fans.

Ashley Naftule: What bands do y’all pull inspiration from? What groups inspired you when you were recording Castration Anxiety?

Heather Gabel: We don’t really do that – not consciously. We both like a lot of the same things. I mean, Seth likes things that I don’t like, and vice versa. The first song we ever wrote together, it was like ‘this is great.’ And then we realized, ‘Oh, this is that Cure song.’ If something ever sounds derivative, we’d ditch it. We’re not trying to make anything that’s like anything we like.

The cover to the album, with the burka and the homage to Michelangelo’s Pietà, is striking. It’s one of the most distinctive album covers I’ve seen in a long time. How did that image come together?

I came up with the idea after we finished the EP that came out before this record. It’s called Black Flame – it’s sort of a concept EP about human rights violations in Iran and a woman named Reyhaneh Jabbari. She was hung in Iran for allegedly killing a man who was trying to rape her… she was 26 years old. That’s where I was at with the lyrics to that.

We had done an installation with burkas, and I’d sometimes perform in one. My dad’s from Egypt. I wasn’t raised Muslim, but he would take me to the mosque. It was a part of my childhood. My whole family on his side lives there still, so I have a relationship with that imagery.

Also, from going to Catholic school, comes things like the Pietà. The cover is bringing all these images together. It turned out really beautifully; our friend photographed it for us in Chicago.

Another striking aspect of your work is your distinctive, B&W music videos. Videos like “Forced Fed” and “Wildfire.” Who’s responsible for those? Is it an aesthetic that the two of you conceptualized together, or is it something you’ve created as a collaboration with other artists?

Heather: For the most part. They’re all collaborative processes. For “Force Fed”, Seth and I just made that video on our own. With “Wildfire,” we worked with two photographers and an editor – a filmmaker friend of ours – and we had a loose concept going into it. That was super-collaborative. Overall, the aesthetic of those videos comes through our filter.

Heather, you’ve spent years working behind the scenes with bands as a graphic designer and artist. Has it been a weird transition for you, moving into a more extroverted role as a singer? Going from being someone who’s backstage to now being someone who’s in the spotlight.

Heather: Yeah, definitely. It wasn’t anything I was interested in doing before. When I was touring before and working for bands, I was doing art and painting. After awhile, I didn’t want to paint anymore so I started doing collage. I did that for fifteen years. And then I wanted to do something different so I made short films and I was doing performance pieces. I was trying to do things that I hadn’t done before and I wanted to do something that sounded scary. It was a natural progression with where I was at in my art practice. 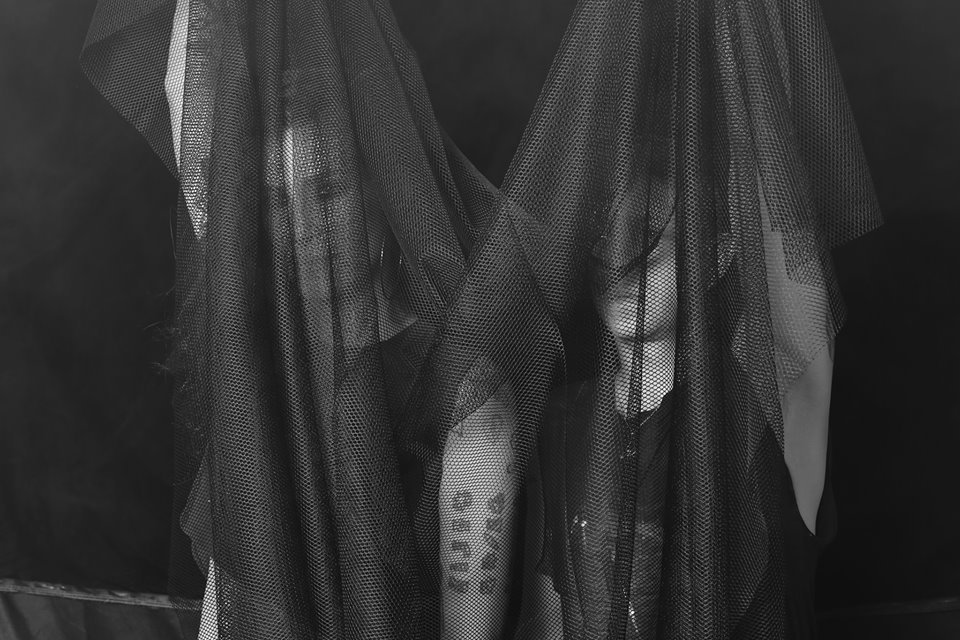 There’s something you said in a past interview, Seth, that I found fascinating. You had said that “the thing that makes HIDE, HIDE is our mutual desire to punish/empower ourselves and our audiences.” I was wondering what you meant by that. In what way is your work punishing and empowering?

Seth Sher: I think that people need to be physically moved or affected to shake them out of a certain mindset — that Internet, information-focused mindset — and back into a physical reality. I like to make music that’s super heavy and big and enveloping. Music that makes you feel like your physical body is being shaken… I guess that’s the punishment.

And then it empowers you by waking you up. I think it’s important for people to realize that there is a physical reality they need to interface with and that they need to be more in that zone so they can be more grounded and centered.

I heard that y’all got booed opening for Marilyn Manson. Considering the confrontational nature of your performances, do you take that as a badge of honor?

Heather: Totally! It was only one crowd, but it was a big crowd in Milwaukee. We were in this beautiful ballroom, an old Masonic Lodge, and I was so psyched to play there. It was the day before my birthday. We got booed after playing our second song — 6,000 people booing us — it sounded amazing. Bumming that many people out is as exciting to me as that many people being into what we’re doing.

HIDE are coming to Phoenix on Wednesday, April 25. They’ll be playing at The Lunchbox with Lana Del Rabies, Early Tongue, and DJ Jackie Cruz. Tickets are still available via Ticketfly.