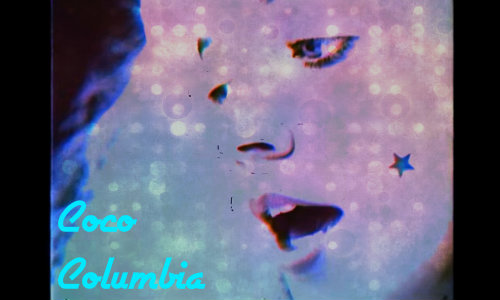 “Under Clouds” is the first single from Coco Columbia’s new record which is due out this coming Fall. The songwriter recently relocated to Los Angeles from her home state of Oregon, but some of that rainy day temperament shines through in the video.

So, without further ado, check out “Under Clouds” directed by Coco Columbia and Cypress Jones. And make sure read our Q+A with Coco Columbia about her music, the new song, and the transition to sunny SoCal from Portland…

What first led you to music-making?

I started playing drums when I was 12 and learned to play rock, jazz, funk, etc. Growing up, I was listening to a lot of classic rock & oldies and I loved the Beatles & and all the cheesy pop of the 90’s. Studying jazz for a few years in college, I went to school for drums but dropped out of music school in 2012 and began teaching myself to sing, make beats, write songs & play keys. It’s evolved over the last few years; I’ve released a few albums, currently working on my third.

Who helped you create the music video? It sorta’ has a Harmony Korine quality I really love.

Thank you! My friend Cypress Jones and I filmed it in Portland, (right before we moved to LA). We made two music videos in a day, one for him, one for me…it was fun! We edited together…I wanted it to portray the feelings that inspired the song. “Under Clouds” in similar to the concept of The Bell Jar — that feel that no matter where you go or what you do, a dark force looms overhead and never gives you a god damned break.

Can you tell us a little about your songwriting process? Did you work with other musicians to help bring “Under Clouds” to life? If so, who?

I usually write everything myself & make my own demos… BUT this is a new collaboration with my friends Grant Sayler & Alex Meltzer. They created the track and I wrote over it. I love collaborating and I’m really happy with the way it turned out. I’m discovering that (often) the more hands that touch something, the better it becomes. I learn a lot when I write with other people.

I love the aesthetic of both the song and music video (and feel they’re well matched). Just curious about some of the artistic influences you draw from in your own work?

For the video, well, I really love lo-fi trap videos. I wanted to recreate that disorienting, shaky, kind of blown-out look that artists like Young Thug, Travis Scott & Yung Lean have in their videos. Trying to take it a step further, I blew things out until you could only see my eyes and lips. I wanted it to feel intimate with the close-ups. Depression is a dirty thing that can’t really be explained unless it’s felt. Watching the video makes me feel physically uncomfortable and that’s how I knew it was done.

Is this single part of an album? Already available or pending release?

Yes! I have a new album coming out this Fall. Title and release date pending…

Are you Portland-based? I think I might have gleaned that somewhere…

I’m based in Los Angeles as of two months ago. I grew up in Oregon and lived in Portland for 7 years. I decided to relocate for music….and to leave behind the feels of this song. Haha.

How’s the L.A. transition going? Do you have some new SoCal hangs?

I love it here! It’s everything I’ve always wanted and could never afford! [haha] I love the bluewhale — that’s probably the spot I’ve been to the most. Aside from checking out shows, I’ve been recording, working and eating a lot of delicious food!

What was the inspiration for “Under Clouds”? Did that help inform your direction on the music video?

The last 8 months in Portland (before I moved to LA) were hellish on many levels. My personal life was falling apart…illness, broken relationships, financial problems, a death in the family and I had to move around a lot. I couldn’t catch a break and started going crazy. I’m a person with bi-polar tendencies and that environment made it so much worse. This song came out around that time. It’s about being knocked down over and over and over and over.

I often get in this mood where I’m so utterly and undeniably sad that I start to think it’s funny, I let go a little and then everything gets light. It’s like I’ve temporarily lost care for anything and I can just be. I start to laugh at EVERYTHING, especially my own ego, and I let go of it. It’s inspiring in a fucked up way, and usually leads to me pulling myself up again.

The constant rain and dreariness of Portland really got to me too. I guess that makes it figurative and literal. It wasn’t hard to act the part in the music video because I was quite literally living that life.

Anything in the works that we should all keep watch for?

I will be releasing new music videos & singles every other month until the fall. I plan to release my third record in November. Either independently or on a label, but I’m currently on the hunt for a label.