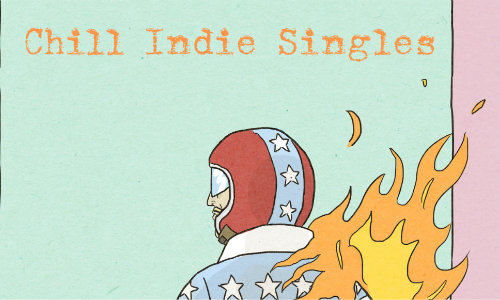 Bobby Baritone has a low-key indie style that makes me think he’d mesh well with in Phoenix. Maybe we’ll get a chance to find out this summer when the Seattle performer sets off on tour. Matthew Fildey is the songwriter behind the Bobby Baritone moniker, in a sorta Diners/Tyler Blue Broderick situation. And, truth be told, “Shaving Private Ryan” reminds me a bit of that hometown favorite [Diners] in its innocent and unabashed feel, both in the songwriting and in the delivery.  The single comes to us from Bobby Baritone’s new EP, Scum Rock, which is due out later this month. Pre-Order is available through Bandcamp!

Phoenix-based songwriter Mikey Pro launched Foresteater in 2015 as the vehicle for his trippy brand of buoyant indie rock “after a dream he had about a band playing on an island in outer-space surrounded by electric rainbows.” That’s actually the perfect way to describe the Foresteater sound. Blurring that rock/pop line, Foresteater’s “Pretend Land” takes some of the grounding of grunge to help tether that candy-coated sound and we love it.

“Born in the Right Country”‘

The indie-folk-rock act known as River Whyless is gearing up for the launch of their new album, Kindness, A Rebel, which is due out through Roll Call Records this coming June. Annnd releasing “Born in the Right Country” as the first single from that record is definitely a bold step in putting your message where your music is as the N.C. questions the random luck of birthright and concept of the American Dream. Of course, River Whyless does this all in a Baroque Folk / Indie Pop style that has counting down days until the June 8th release date of Kindness, A Rebel. Pre-order the new album through Bandcamp today!

Truth be told, I’ve only glimpsed windswept plains of North America, but I imagine that if they could sing, they would sound a lot like Erin Rae. Riding along that sometimes indetermintate line between indie-folk and Americana, Erin Rae’s latest single, “Can’t Cut Loose”, showcases the artist’s talent for translating the heaviness of earthly sorrows through her ethereal voice. “Can’t Cut Loose” is the first single from Erin Rae’s forthcoming LP, Putting on Airs, which is due out in June through Single Locke Records.

Laura Jean Anderson also comes to us from the great state of Washington, but this time from Olympia. After moving to California to study classical voice at CalArts, Anderson spent some time picking up farm work in South America, and back in Washington, before returning to her newfound home in Los Angeles. Some of you might remember she passed through Phoenix last year while working on new material. “Silence Won’t Help Me Now” is the first single from that new collection from the songwriter.