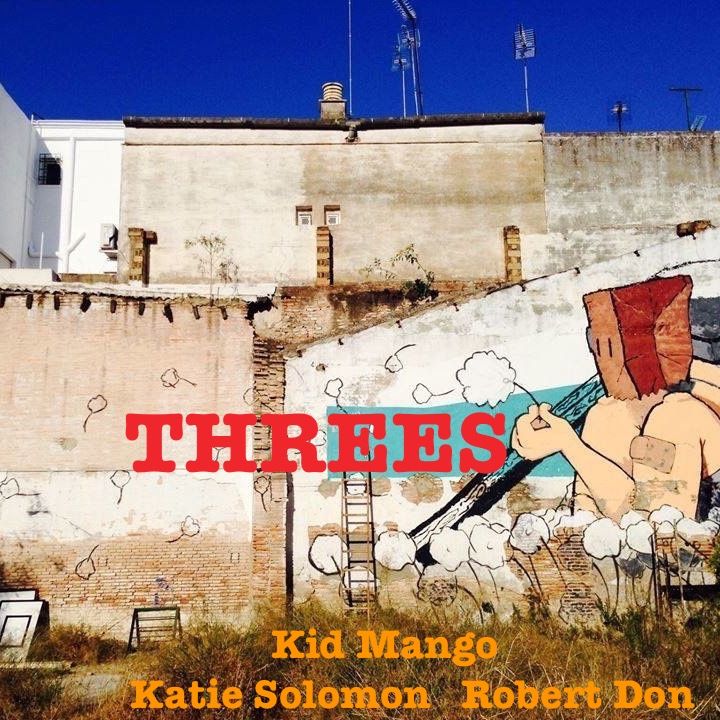 The D.C.-based artist known as Kid Mango has a sweet new single to share today. There’s a conversational framework to the music that lends the hiphop track a jazzy, spoken-word vibe as we move through this triptych aptly titled, “threes”.

We gave radio listeners a sneak peek of the track a couple weeks ago, but we’re super excited to share the official premiere of “threes” from Kid Mango. Smash that play button so the song can set a chill vibe while you peruse our Q&A with the man, Kid Mango, himself…

YabYum: What first led you to music-making?

Kid Mango: My Grandmother ran a Western classical music school in Bangalore, and until I was like seven or eight, it operated out of the house I grew up in. So I was constantly surrounded by kids butchering, like, baroque composers. She decided the violin was the way for me and that I was going to be the next Paganini or something.

I wasn’t bad, honestly, but it never took. While I do have love and respect for Western classical music, hip-hop (which was also from the other side of the world) always resonated more with my reality. I ended up moving to the States at eleven and from there I was hooked.

I tried to make some music with friends in high school, but we got nothing recorded. Robert [Don] is a roommate of one of my best friends from college and he’s a really talented musician. I was at his house one day and was saying if some of these dudes I ran into at parties could call themselves rappers, I should too. He was like, “aight,” and next thing we were in his room making beats. I think neither of us was taking it too seriously, but then we started making something interesting.

Kid Mango is an interesting moniker. Is there a story behind the name?

I really wish there was something. Here’s where I could throw down the Indian shit heavy. A perfectly ripe mango is a symbol of perfection. I’ve had to literally chase monkeys out of my grandmother’s living room who had come in feast on the mangoes that were bought for me. Also, I’m always telling people in the Western Hemisphere they’ve never really had a mango and I’m trying to get back to that childhood bliss of passing out from gorging myself on mangoes.

I feel like that is all in play, but I just had pick something. We were sitting on music, unable to move forward, because I lacked a name. I suggested it as joke, and really laughed myself out the room.

Who helped you create “threes”?

This was probably the most collaborative track on the tape. Robert Don produced, mixed and mastered. You can find his other stuff at http://www.robertgdon.com/. Katie Solomon sings the chorus and is the frontman of jakals (http://jakalsmusic.com/). Oluwaseun Odubiro slays the bass on the track. The underlying image accompanying the track is some street art in Spain by Daniel Shkolnik.

Did you record all the instrumentation yourself or did you draw from samples or both?

I had flu when the beat was made, so I got there and slept through the session, waking up at random points to throw in an inane suggestion. One being we needed a non 4/4 time signature, so Robert met me in the middle with 9/4 for the chorus. It was a mix of samples and live instruments. Robert played the organ and Olu played the bass, then their parts were sliced and laid back in.

I see the album was recorded in Brooklyn. Are you from the area or did you matriculate to BK?

I’ve actually never lived there, couch surfed for minute, mostly just leeching off the rep. Honestly, I have stopped saying “recorded in a bedroom in Brooklyn” because, while true, makes me seem like the ill poser.

Robert lives there though. We produced and recorded it in his bedroom. It’s funny, he was working at a studio at the time too, so he got free actual studio time, but I never liked the vibe. Plus, it felt ridiculous making someone who has won a Grammy listen to my songs and be like “not bad, dude.” My friend Olu plays bass on “threes” and he’s actually from BK tho.

Oh, and I worked at a bagel shop in Crown Heights for, like, six months.

Can you tell us a little about your songwriting process?

Yeah,  so I’d go in on Tuesdays. I’d like get wasted in the corner and make unhelpful suggestions as Robert made the beats. It was really important to me to be there for this part of the process. The beats were an attempt to try to capture emotions. I had the idea that the tape would be the emotional roller coaster of some random night out so we tried to fit into a mind state following that progression.

Then I just listened to the beat over and over again, like over a week, until I felt I was in it and just rap over it where ever I went. I write down what was good and then just sit in my room and see what hit.

What was the inspiration behind this single?

This is the stage of the night where you are getting into some faux/real deep shit, as the people start to dwindle. The beat was initially split, so I thought it would be cool if we could come in on a story and then break into the rap. We tried out a couple of ways and this one really seemed to build well with the beat. The train really fit with the forward momentum of tracks.

The “three pieces” were the most interesting part of the story and, culturally, we also put a high value on that number. Things like the holy trinity; story structure; the comedic rule of three; primary colors; the colonially split of India. People are about the number, it feels significant, just like this event did to me.

Robert came up with the chorus and we thought Katie (from the Jakals) would be ideal or it. The middle was crazy so I just wanted to have fun with it and then bring it in for the end. That heartbeat shit at the end was low key giving me panic attacks as I listened to it, so I wanted to say something grounding over it.

What do you do when you’re not making music?

I do a little sculpture, act a little. I’m trying to drink more tea. Mostly shoot the shit with my friends and toil away at something.

What’s next for Kid Mango? Mixtape in the days/weeks to come?

Big things I hope. Dropping the mixtape/EP ‘Same Outfit’ March 22nd wherever one get’s their music, so get hype for that. Looking to make more cool shit, so feel free to hit me up.