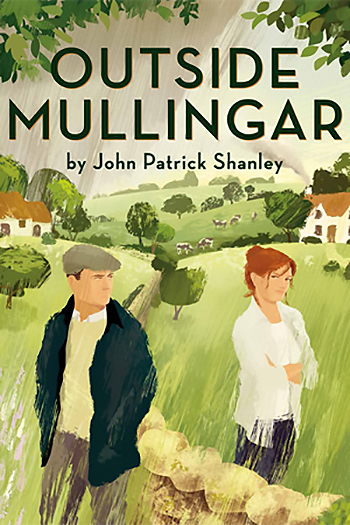 In less than a month, St. Patrick’s day will be upon us and, with it, all the usual tropes and clichés of the holiday. As usual, St. Patrick himself will be quickly overlooked by all but the most orthodox of celebrants and the revelry will center on “being Irish.”

Or maybe it’s just “the Irish.” Could be “Ireland.” It depends on who you ask, really. It’s not like Irish people are the only ones wearing green on the 17th.

But whatever people are toasting with their green beer, by the middle of March, we’ll all be walking hip deep in cardboard four-leaf clovers and cartoon leprechauns, corned beef and cabbage salesmen will be having their best month of the year, and whether anyone wants it or not, there will be a bumper crop of awful impressions and painful adventures in dialect straight out of breakfast cereal commercials.

Knowing what’s coming then, it’s reassuring to have a reminder that Ireland is a real place with real dirt under real rain, and the people who live are exactly that – people, not caricatures or cartoons, but actual people with histories, loves, losses, dreams, stories to tell and a language of their own to tell them with.

Outside Mullingar, the fourth production of Arizona Theatre Company’s 2017-2018 season will serve well as that reminder. Playwright John Patrick Shanley spent twenty years ruminating on the stories he heard and the people he met on his first visit to Ireland before writing the show, which was nominated for a Tony for Best Play in 2014. This production, the directorial debut at ATC of Artistic Director David Ivers is an intimate, unpretentious and quietly soulful production. 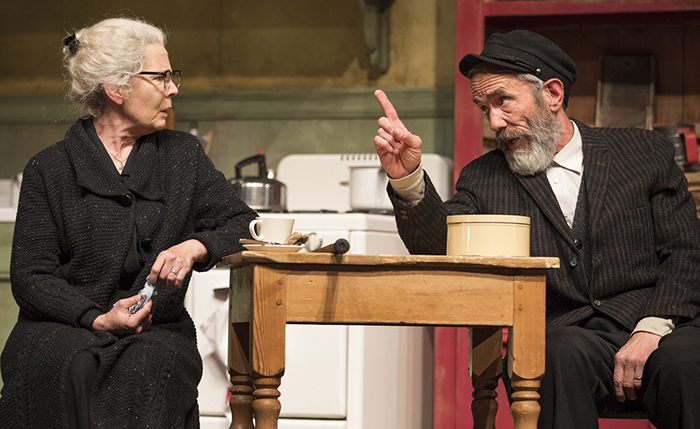 Robynn Rodriguez and John Hutton. All photos by Tim Fuller and courtesy of Arizona Theatre Company

This is a love story, though not simply about romantic love, but also about the love of parents for children, children for parents, love of the places we grew up and love of the dreams we have of escaping them. There’s also a romance, too.

Scenic Designer Scott Davis’ unassuming composition conjures two adjacent farmhouses in rural Ireland, and occasionally the fields around them. Worn lumber, stained a weathered emerald, forms a tightly constructed frame around the action, neatly symbolizing the bonds between the characters – tightly crafted, if not always intentional.

The houses themselves – or more accurately, the rooms, as we only see one room of each house – are neither stylized or showy, though they serve to paint clear pictures of the people living within them – a pair of grown bachelors in one, a proud and capable woman putting up a good fight in a solitary life in the other. 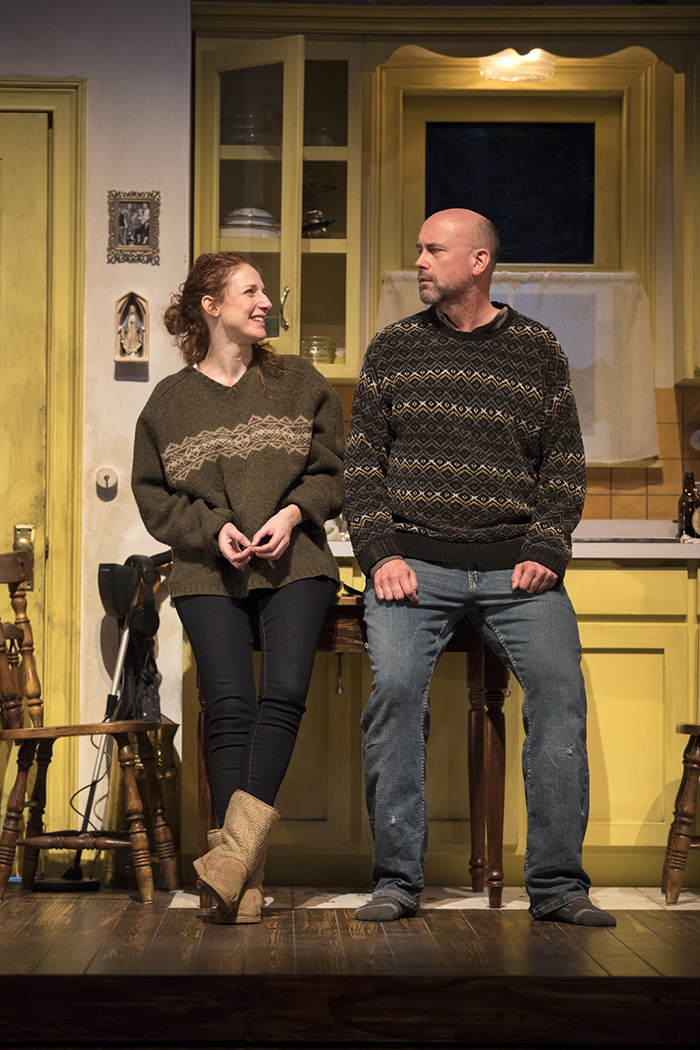 The land outside these homes, a land the characters each have a complicated relationship with, and which complicates their relationships with each other, is evoked through sound, light and shadow by Sound Designer Brian Jerome Petersen and Lighting Designer Xavier Pierce.

In a story where the spaces around things and people is so important to the narrative, their designs handshake both eloquently and unobtrusively, mostly by suggestion. When it rains on stage, it’s easy to imagine the smell of wet soil under old boots, which is a credit to their work.

The cast of characters is not a large one, though the show doesn’t suffer any dearth of personality as a result. Two generations of Reilly men, Tony and his son Anthony live next door, as the play opens, to the Muldoons, Rosemary and her mother Aoife. Aoife’s husband, an old friend of Tony’s has just passed, and Tony is hopeful of convincing Aoife of a business offer he’d never convinced her husband of when he was alive. 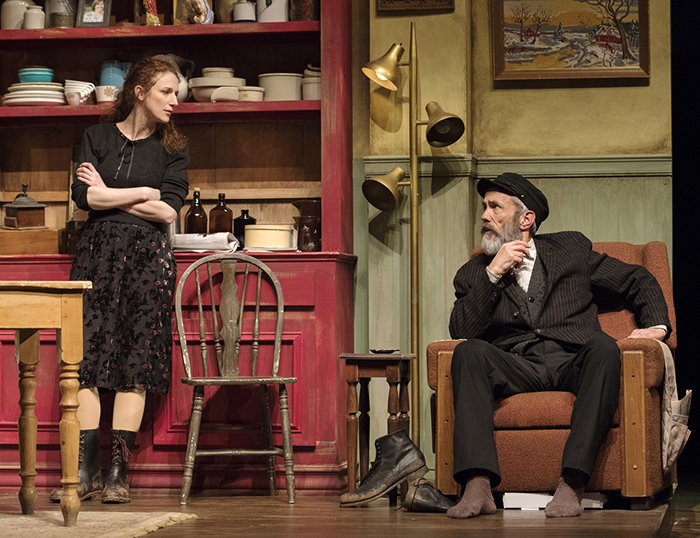 As a result of his efforts, old grudges and long-held secrets begin to drip out, though only slowly, as each character is model of ornery stubbornness and less-than-tender sensitivities. The dialogue is not only sharply funny, if often heartbreaking, but under the ministrations of Dialect Coach David Morden, achieves that rarest of accolades in productions requiring dialects: It’s consistent. The musicality that compelled Shanley to scribe the play in the first place resounds from the stage like a score by turns brassy and enchanting.

Aoife and Tony are embodied by Robynn Rodriguez and John Hutton, respectively. Neither is burdened with an overabundance of stage time, but neither fails to make a meal of the time given their characters. Hutton is particularly effective, especially in the first scenes of the play. He’s funny and frustrating, dropping sharp lines impossible not to laugh at, then lobbing casual cruelty at his son and neighbors. Tony walks an impossibly fine line, being somehow mean without coming off as malicious or unlikeable, and Hutton is clearly having a ball with him.

The younger pair, and the characters which the script deals with most directly and often are Anthony and Rosemary, played in this staging by Larry Bull and Cassandra Bissell. That there’s a romance simmering between these two is established to the audience in the first minutes of the play, but the authentic walls each of them erects out of pride and spite make the question of if they’ll ever realize that fact themselves a compelling one until the lights come up at the end of the show. 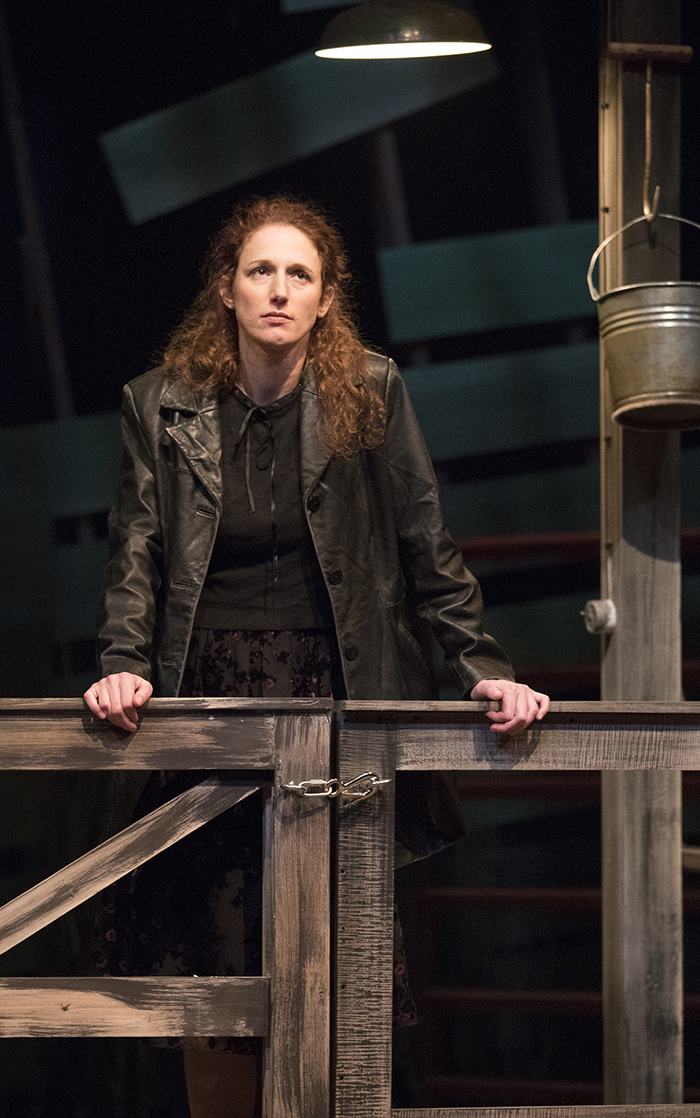 Bissell is a powerhouse. Sleight of frame, it sometimes seems that her temper and her contempt move her against her will. But even for her touchiness, Rosemary is a character who aches, and her aching is palpable.

Not every moment is a treasure, as there’s a joke or two that doesn’t work, a bedroom scene that treads on some unearned reconciliation, and revelation late in the show that crosses the line of non sequitur, but the actors are to be commended for throwing themselves into it. If the moment doesn’t work, it’s because it doesn’t work on the page, and the thud is easily forgivable, considering how the rest of Shanley’s script booms.

The odd misstep aside, Outside Mullingar was a fantastic production, that was both simple and complex. And, I reiterate, no leprechauns.

For more info and where you can get tickets to upcoming Arizona Theatre Company shows (including the stellar looking Low Down Dirty Blues), head to their website. 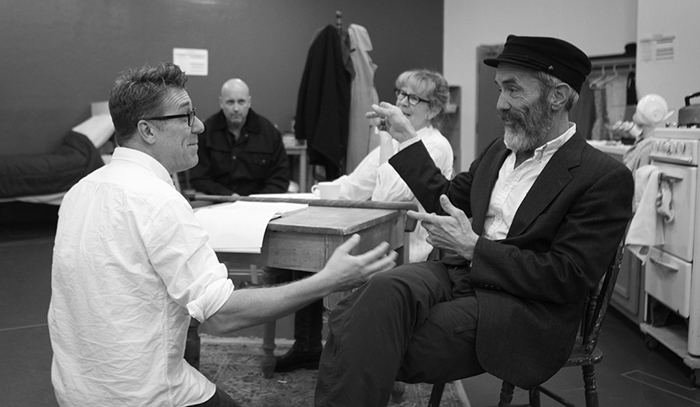 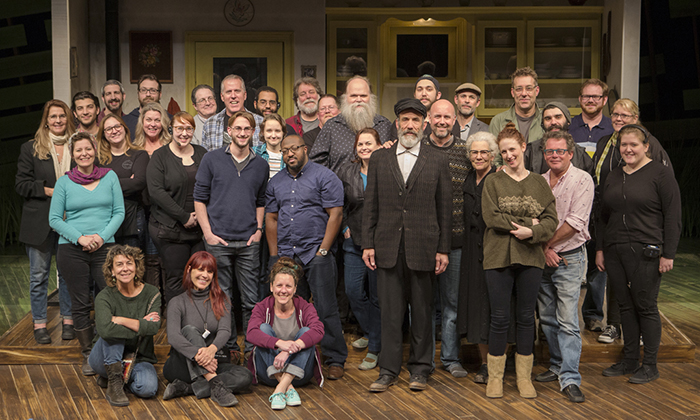