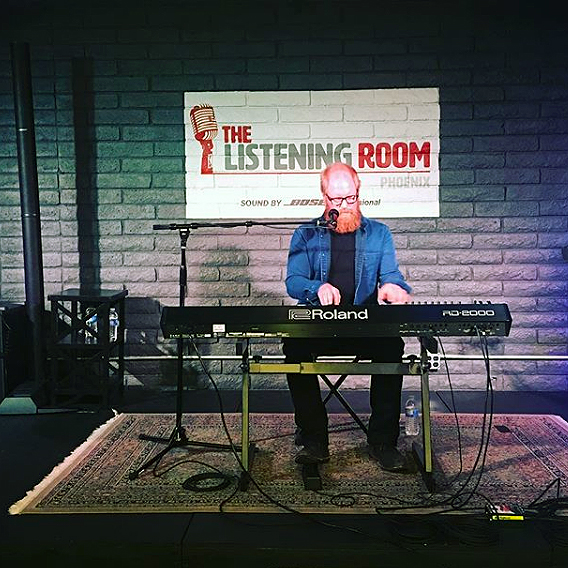 Check out his performance, and then read a short Q+A with Robin about this song, some of his influences, as well as what’s upcoming for his band SweetBleeders as well as his new project, Two Swords Quintette.

YabYum: So, please tell us a little about the song you chose to perform. When did you write it? Anything prompt its creation?

This song, “One Day/Can’t Remember”, or I’m also calling it “One Day Everyone Will Know”, is a companion song with another one called “Bunny”. They share some of the same melodies and are telling two parts of a story. I started this one a couple years ago and forgot about it before I wrote “Bunny”, and then rediscovered some lyrics in one of my notebooks, did some digging through audio messages I left myself and found some basic melodic ideas there which I had unconsciously self-plagiarized.

It is about trying to stay in control versus losing control of feelings and actions, about being afraid of losing control of sanity, about living with grief and the loss of loved ones and also the loss of memories that were once clear but start to fade or even disappear. Sometimes a person can shove some powerful but unwanted or inconvenient feelings down just to get through the day, but something seen or heard or read might suddenly trigger unexpected explosions of emotions and you’re at their mercy .

It’s also a kind of a deliberate dig at the notion that it’s embarrassing or uncool to be open and candid about your feelings.

I try to keep aware of ideas. Various thoughts are flying through and around all the time, but some of them stick out as being interesting. If it’s a word or a phrase or concept, I try to remember to write it down as soon as possible, just to refer back to later. If it’s a musical idea, I’ll sing it into my phone or try to hold it in my head until I can get to an instrument and a pen and paper, draw five lines and chart out the melody.

The worst thing is to forget a potentially good idea, or to only partially remember it like, “the notes are right, but how did the rhythm go?” So it’s important to document these things… but you can’t document everything, there’s not enough room.

Sometimes I’ll get lucky and have a deluge of compatible ideas, and sometimes it’s just garbage, but you know what they say about trash and treasure. Whether I’m excited or embarrassed about something I just came up with, it’s hard to tell if it’s any good to me without some time and perspective.

There have been times when I’ll play a basic brainstorming game to get ideas going: pick a subject, write some words on small pieces of paper that relate to the subject and scramble them. Choose some words to turn into phrases and sentences that relate to the main subject. Sing the phrases and find the chords that support the melodies. These song games may turn out stranger than you expect. I think it’s good to disrupt natural (and acquired) tendencies. One can always employ some Oblique Strategies to get things going or to help make a wild decision.

Most days, I sit at the piano and work on various things. I’ll improvise within certain frameworks, making up rules and breaking them. Swimming easy in familiar territory and then do some deep sea fishing. For every song I’ve finished, I have many unfinished / partially realized song ideas so I’ll pay some of them a visit and see if any of them are begging to be put to work. If something I’m working on feels like it’s going somewhere, then I’ll record rough versions of it and start listening .

Going for long walks is probably the best way to work on songs.

I’ll often be ready to give up on a raw idea, but I’ll introduce it to Steve (Dueck, drummer for SweetBleeders) at rehearsal or send him rough demos of things to get his feedback. If he gets excited about a certain song, then it can give me more momentum to want to bring it to life.

Imposing a deadline and having limited time can definitely help make ideas come though.

I think the first music I remember really being aware of and interested in when I was a child were the cassettes my parents had in the car: Holst’s The Planets, Billy Joel’s The Stranger and Edith Piaf Live at Carnegie Hall... those are the recordings that have probably had the most formative and continuing effect on me. There was an abundance of musical theatre in our home too, and we all sang the songs from Cabaret, West Side Story, The Music Man, Peter Pan, Singing in the Rain, The Sound of Music, etc. That music is just in my bones.

Lately, I’ve been slightly obsessed with Luiz Bonfá’s Gentle Rain (English lyrics by Matt Dubey), especially the Astrud Gilberto version… It’s lovely, sad perfection. Garrett DeVoe, of Pure Horsehair (Brooklyn-area artist), is a good friend and great human being and keeps self-releasing albums of some of the best and strangest songs. Mike Montoya of Fatigo is also one of the most original songwriters I’ve ever heard; I’m lucky to get to play music with him a bunch.

I’ve rattled off a list of various other artists but I can’t overstate the influence that Mark Erickson has on me. We collaborated and were pretty artistically intimate for about 12 years in Colorstore and SweetBleeders… and he continues to haunt me, especially in my songs.

The newest batch of SweetBleeders songs is really coming together now, so possibly within the year there will be a new record and definitely some more shows in and around AZ. Also, there’s a new group, Two Swords Quintette, in which we are collaborating with some of our kids and will be making its debut soon.

Follow Robin Vining on Twitter and Bandcamp and  catch him performing at the When in AZ Vol. 2 event at The Rebel Lounge with Fatigo, Soft Deadlines, The Edisons, The Invisible Teal, + Bearistotle on Friday, April 13. The event is free with donations accepted at the door.