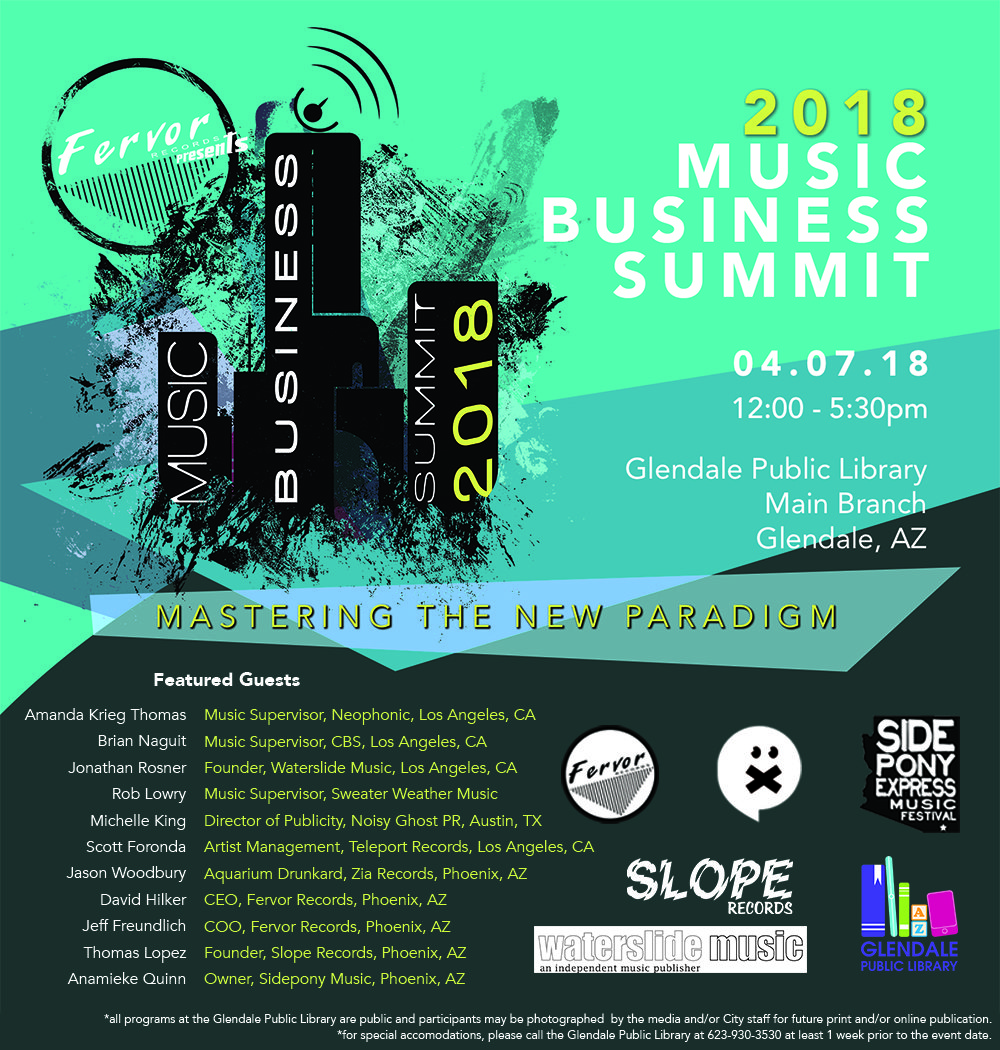 Hey all you musicians and music industry mavens in the making, Fervor Records is hosting a music business summit titled, “Mastering the New Paradigm: Forging Your Path in Independent Music”. Now, that sounds like some information we could all use.

For this event, the Fervor crew has assembled quite a group of speakers to guarantee everyone who shows up will leave a bit more knowledgeable on a range of topics from “What the Hell is a Music Publisher?” to “The Relationship Between PR and Journalism”.

And, the event is FREE. You just have to jump on that registration early to secure your seat. We had a chance to ask David Hilker of Fervor Records a few questions about the label, the industry, and the summit on April 7.

YabYum: How did you get your start in the music industry?

David Hilker: I joined my first band when I was 14 and was hooked. We gigged so much I dropped out of high school to pursue music full time. I really set out to learn everything I could about all aspects of the music industry. When I quit school my parents told me, “We think this is a terrible decision but we love and support you in every way… just never ask us for any money.” For me it was really sink or swim and I made a commitment to forge a career in music. I guess I had something to prove to my parents but it also served as a huge motivator. 42 years later it continues to be a fun ride!

What prompted you to start Fervor Records?

I started the label in 1989 with a few friends, Michael Charlesworth, Ron Pick, and Ted Bulger. We were working musicians that wanted to learn more about how a label operated. However, we had no money or funding. We decided to get an education by donating a year of our time to Central Arizona Shelter Services, a charity benefitting the homeless. In order to do so we operated under their non-profit status.

We started working in January of 1990 and released the first Christmas compilation album in Arizona, entitled “Southwest Holiday,” that November. We were able to get everything donated for the project from commercial office space, studio time, artist recording and performance fees, artwork, manufacturing, etc. Handling all PR, distribution, and booking events — we even got a proclamation from the Governor. We generated a ton of press for an entire year and ended up selling 4,000 cassettes in six weeks locally. One hundred percent of everything was donated to Central Arizona Shelter Services. Eventually my business partners moved on to other endeavors but I carried on with Fervor Records.

Is there a particular focus for the inaugural Music Business Summit? Or is the event aimed more at providing a broad overview of industry info for burgeoning artists?

The idea is to continue the Fervor tradition of giving back to the community. The Summit will speak to the business side of music, the space where art and commerce meet. So artists yes, but also anyone interested in music publishing, music supervision in film & TV, public relations, artist management, etc.

I went to the school of hard knocks — I started as a musician who segued into recording, songwriting, recording studio ownership, management, publishing, licensing, etc. My business partner Jeff Freundlich is a college grad who worked at EMI Records and some tech startups. We have an interesting dynamic and we wanted to share some of our real world experiences with the creative community.

To help, we’re bringing in some friends from Los Angeles including a few of our top music supervisor clients, music publishers, artist management, our PR firm from Austin, and some journalists. We will have panels moderated by some local greats including Jason P. Woodbury (Zia Records, Aquarium Drunkard), and Anamieke Quinn (Sidepony Music).

Just wanted to confirm that the event is free but interested participants should R.S.V.P., correct?

Ivy Jarvis from the Glendale Library has been incredibly generous in donating their awesome facility. Fervor Records is picking up the rest of the tab entirely. Some generous folks have also been reaching out to provide cool swag bag goodies as well. So to answer your question… Yes, the event is 100% free! However, there are only 250 seats available and you have to reserve your seat [here].