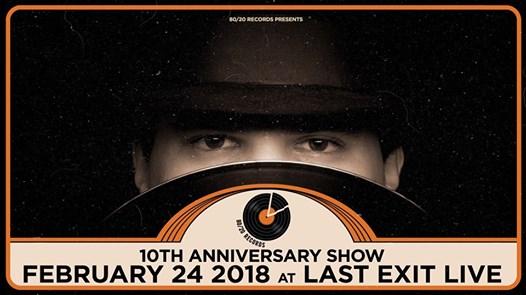 The music industry has set the standard for giving artists a raw deal, but a decade has passed since Mike Zimmerlich set out to change all that with 80/20 Records. In the ten years since the local label has launched, Zimmerlich has worked with some of the Valley’s finest including Captain Squeegee, Dry River Yacht Club, Future Loves Past, Zero Zero, and other notables in the annals of Phoenix Music History.

This weekend, 80/20 Records will be celebrating their decennial anniversary with members of their roster both past and present. Captain Squeegee, Bear Ghost, Ben Anderson, 42 Eternal, and others will take over Last Exit Live on Saturday (more info here). To mark the occasion, Mike Zimmerlich took some time out of his schedule to answer our barrage of questions about running a record label and what’s next for 80/20 Records…

YabYum: So, when did you start 80/20 Records and what led you to that decision?

Mike Zimmerlich: I started 80/20 Records in March 2008. I’ve known I wanted to be an entrepreneur since I was 18 years old in high school after selling ‘yearbook DVDs’ to my fellow classmates.

When I was in college I had two notebooks, one for the classes I was taking and the other for any business ideas that popped into my head. I’ve always had a passion for technology and being a musician myself, playing trumpet, piano, and guitar, I wanted to find something that would pair my interests.

My first venture was a website where independent musicians could upload their music to internet radio stations that we hosted. After two years on the website, we launched a beta version and let our friends try it out. However, at that time, Pandora and last.FM became hugely popular so my partner and I decided to go in a different direction. That’s when out of the blue my partner suggested starting a record label.

At the time I was watching closely on the articles being written about the RIAA suing people for illegally downloading music and how some record labels were mistreating their artists. I told my partner that I didn’t just want to start any label, I wanted to create a record label that would be a role model for the music industry where our priorities were to treat our artists, their fans, and music consumers with fairness and respect. That’s when I suggested what if we gave back 80% to our artists, hence the name 80/20 Records.

I love the concept behind the label’s creation. Can you tell us a little more about how it works? What can artists expect by way of support for that 20%?

80/20 Records is an independent record label and management company. On the label side we handle music and music video releases. Until you drop an album as a musician you don’t realize how much work is involved. We help with making sure everything is uploaded correctly to digital stores and streaming services, ordering CDs, vinyl, etc. and shipping them, scheduling the release in conjunction with marketing and press, getting the music ready for placement opportunities in film and television, and many other things.

On the management side we handle the artist’s career overall, things like finding them opportunities like performances and partnering with companies, help on tour planning, overall branding and marketing, and finding other people such as PR agencies, booking agents, and so on to make the ultimate team for the artist.

Also, forgive my ignorance, but how is the 80/20 breakdown different from other labels out there?

Usually, independent record labels will do a 50/50 split.

I see that Captain Squeegee is currently on your label. They’re quite the heavy-hitters and always seem to go big on albums and music videos (of course). What prompted the partnership between Captain Squeegee and 80/20?

Funny story! Captain Squeegee has been on my radar for a long time. In fact, I found out about them when checking out bands on MySpace. However I never ended up seeing them perform live. Four years later one of my colleagues, Jason Shoff, suggested we meet up with them.

So we got together in their rehearsal space and when we got there the space had NSFW material all over the walls, which I found out later was an inside joke with other bands in the space. All of them were extremely nice and enthusiastic but still wasn’t 100% sure if they were a right fit.

So, finally, I got a chance to see them perform at Crescent Ballroom with the ASU Jazz Band. Immediately I fell in love with this band and knew whatever it took I would help them get into the studio to record their next album. That album was To The Bardos!.

Captain Squeegee has been an absolute pleasure to work with, every single member of the band has always shown their appreciation and commitment. This is one of the most crucial keys to success and I’m very grateful to have them as part of the 80/20 family.

Looks like 80/20 has a pretty stellar back catalogue as well, including the bands Future Loves Past and Dry River Yacht Club. What do you look for in artists you are considering signing?

Second, there has to be chemistry between myself and the artist. Trust is so important because the artist is literally entrusting their music and their careers with the work that I do. That’s why I usually like to meet up with the artist a couple of times or have worked with them before either on a show or some other collaboration before making a decision.

Now that we’re coming up on the 10 year anniversary of the label, can you share with us any highlights from your musical journey that really stand out for you?

My fondest memories are some of the smallest ones. One time one of my artists, 42 Eternal, whom are doing a special reunion for the show, were hanging out at the lead singer’s house.

The band had a new song and wanted to play for me. I was sitting in the center of the room and they performed acoustically this incredible ballad that almost had me to tears. It was such a beautiful song and I had the honor of being there while they were performing it for one of the first times. They never ended up performing that song live.

Another moment I was hanging out with Danny from Captain Squeegee and he turned to me and said “I have something for you”. Then, he puts down a toy bus and says, “I just want to let you know how serious we are about touring.” From that moment I knew we were a match!

What do you suggest bands do when looking for a label? Any specific pointers for folx looking to land on your roster?

My best suggestion when looking for a label is to put yourself in a position where the label comes to you. I would be lying if I said we don’t look at social media numbers, streams, previous sales from albums, attendance at shows, etc.

A record label is best useful for an artist who already has something they are bringing to the table and the label can help them get to the next level. In the meantime, learn as much as you possibly can, write just as often, and build up your numbers across the board. There are people out there that are more than happy to mentor upcoming artists, including fellow artists. Not to mention workshops, webinars, etc.

Specifically for us, look at our current roster and see if your music is a good fit. Be brutally honest with yourself if the production is at least on par with the material on our label. If you feel it is, we are always more than happy to listen. Bottom line, most of the artists I’ve signed, I’ve approached them. I’ve seen them at shows either performing with my other artists, was recommended to check them out by a colleague, or they keep on appearing in press. If other people are talking about you, that’s the best way for me to know there’s something there.

What’s in your next ten-year-plan for 80/20 Records? What can folks look forward to?

Our ten-year plan is to expand our team so we can do even more for artists in the future. One of the exciting aspects of running your own business is you really don’t know what lies ahead ten years down the line. It may look very different then! However, our core is always to adapt to the needs of the artists and how people are experiencing music. In the immediate future, we have a lot of incredible things we are announcing and launching in 2018. In fact a couple of them we will be sharing at the 10th Anniversary Show!