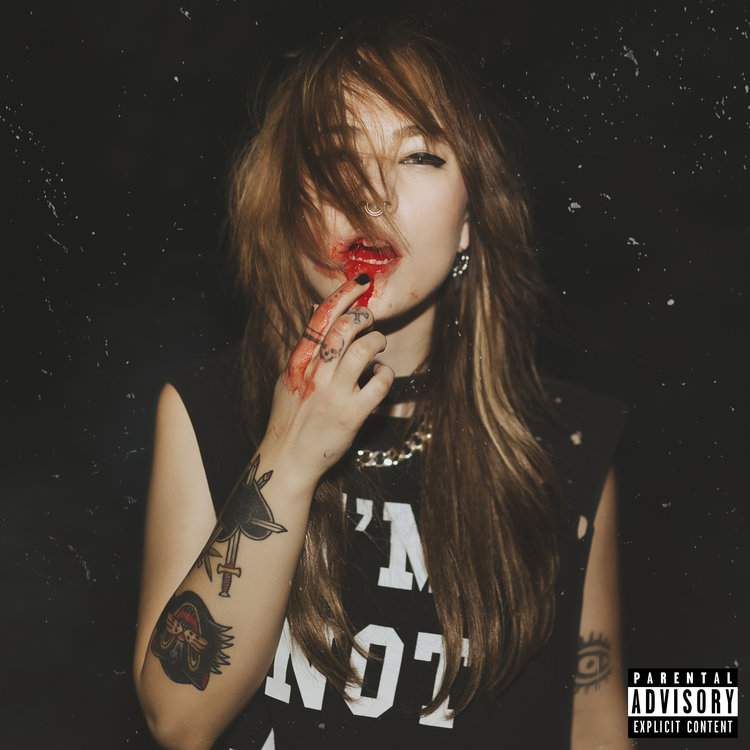 I’m going to come clean here. While I’ve long been a fan of Fairy Bones as performers, I felt their debut LP, Dramabot, didn’t quite live up to the band’s full potential. Certainly, there are a couple standout singles and some moments that reinforced the idea that Fairy Bones was exactly that: a band with a tremendous amount of potential.

But Dramabot came out in 2015 and Fairy Bones is now gearing up to release their sophomore effort, an often-maligned undertaking. I have to say, after diving into 0% Fun, Fairy Bones cold crushes the stigma of the sophomore slump with the glorious culmination of all that predicted potential.

The band’s grungy glam style finds just the right mix of alt-pop to serve up alongside the sardonic lyrics. There are anxiety-inducing moments for anyone who has had to brave the treacherous waters of their 20s. A vibrant example waits on the song “8-Ball” as Chelsey Louise belts out, “The 8-ball fucking lied to you. You won’t grow up. You have no clue.” That line hits hard and, I’m sorry to report (from half past my thirties), this anxiety might not ever go away.

“Incapable” was really an unexpected jewel for me on 0% Fun. Maybe I’m partial to the self-conscious exposition on self-doubt because it’s just so painfully human and real. That’s what sets the songwriting of Fairy Bones apart from other acts. They manage to capture the awkward realities of the every day – to encase those moments so you can take a hard, long look later. It’s enough to make you want to cry in the shower except the music is fun (contrary to the album title) and makes you want to dance your way through the discomfort.

0% Fun is the Fairy Bones’ album we’ve all been waiting for since the day the band first appeared on the Phoenix scene. Smart, sarcastic, and just ever so slightly sullen, 0% Fun pulls all the independent powers of Fairy Bones’ cast of characters into a fully unified force for the betterment of rocknroll. And you know what, I’m not sorry about holding back excessive praise because now you know I really mean it. This album fucking rocks.

I had a chance to ask Fairy Bones a bit about the making of 0% Fun and the inspiration behind the album as part of our For the Record series. You can check out that Q&A below, but first a little sampling from the album in music video form…

So this definitely isn’t a case of the sophomore slump with 0% Fun. It definitely feels like the band has solidified a distinctive sound, one that’s more fleshed out, on this album. In the two years since your debut LP what have you been doing? Real fast catch-up. Touring? Writing Songs? Cohabitating? Daily practices? Ritual sacrifice?

Chelsey: We toured with Highly Suspect. Opened for Marcy Playground, Fuel, Jessica Hernandez & the Deltas, Vundabar, Rozwell Kid and The Dollyrots in the Valley. Released four singles and three music videos. Wrote a bunch of songs. Chilled the fuck out. Binge watched a lot of TV. Became obsessed with The Room. Adopted four chickens and a cat. Cut down on smoking and picked up more yoga. And yes, we are still cohabiting, but we upgraded to a house in Tempe – with air conditioning!

Fans have been given some early hints at what’s in store for them with some of the singles you released last year. And, if memory serves, there were some pretty rad music videos to accompany those singles. Are they all DIY from the Fairy Bones crew or did you work with outside directors?

Chelsey: “Pink Plastic Cups” is a DIY music video, but we didn’t plan for it to be. I had asked a bunch of parents to bring their children to Matt and Ben’s house and then didn’t have a videographer, so we grabbed some camera equipment at Fry’s Electronics and shot it on my iPhone 7 Plus! I knew I wanted it to be in slow motion but everything else was just thrown together on the spot.

“No One Can Suffer Like I Can” was filmed by Jeremy Tremp in the desert somewhere (with the help of Stanley Ellis who showed up with the coolest car) and “Killing Me” was shot by Rachael Smith in an alleyway behind our house.

Back to Bob Hoag at Flying Blanket for this one, right? Do you feel that working with Bob over the years helped give shape to your sound? I’m getting some retro-pop hues that tie in well on this album, like “Look Good for the Radio”. What were you looking for when you set out to find the right studio for Fairy Bones?

Chelsey: Yup, always with the Hoag. He’s like our “fifth Fairy Bone” at this point. It has definitely helped shape our recorded sound, but we are also learning more about recording in general and we’re applying that knowledge to our sound. We’re really comfortable with Bob now, so although we don’t get into ‘fights’, we have no problem telling each other our real opinions on arrangements, sounds, etc. I think that really helps the songs.

When we first started looking for a recording studio, we had 3 appointments scheduled and Bob was the first. After meeting him and seeing the studio, we canceled the others. That’s how sure we were he was our dude.

Is there a principle lyricist for Fairy Bones or do you share that responsibility? The songwriting feels very self-conscious and, while it makes for some wonderfully pensive lyrics, that seems like it sucks. How do you balance the personal and the performative as a songwriter?

Chelsey: Matt (drums) wrote some of the songs on this album. He wrote “Killing Me”, “Radio”, and “Into The Void” and we co-wrote “Cups”. Matt and I especially went through some personal growing pains and I think that’s reflected wholeheartedly on the album.

“Incapable” was a really surprising gem on this album for me. I feel like it’s a perfect example of how the band has reached a new epoch of fluidity in the Fairy Bones’ sound. It’s dynamic, emotional, and totally fierce all at one time. So, basically, I have some questions the different members of the band to get a sense of influences… so…. What is your favorite album ever?

What was the best live performance you ever saw?

Is there an artist outside the realm of music that has an influence on your own artistic direction?

Chelsey: I’m inspired by a lot of authors, one of my favorites being Douglas Adams. I like his satirical take on everyday, mundane things.
Matt: I’d say the other members of the band are the biggest influence. Without them, it would be meaningless noise. It’s what they all bring to the table that inspires me.
Ben: Bob Ross.
Robert: Jim Carrey.

If Fairy Bones had to side-gig as a cover band, what band would you chose to cover? Bonus points for naming said cover band.

Chelsey: I’d round up a bunch of lesbian friends and start “Les Zeppelin.”
Matt: “The Karma Police.” We’d do Radiohead versions of Police songs and Police versions of Radiohead songs. It would be perfect.
Ben: We’d play Bon Jovi songs and call it “Chelsey and the Jovi Bones.”
Robert: The Forrest Gump soundtrack cover band called “Jukebox of Chocolates.”

I would say this album is a lot of fun in spite of the title. What led the band to the name 0% Fun for this new release?

Chelsey: It’s called 0% Fun mainly because everything is pretty 0% fun in the world right now. Things are little scary. That reflects in everyday life, for example, anxiety and depression are at an all time high. We’ve been saying the record is like dancing in hell – if you’re going down, at least kick ass on the way.

What’s in the works for the release show? Fun bands? Balloon Animals? Or should folks show up expecting 0% fun?

The tagline for this album is “0% fun or your money back” so, hopefully, it’s 0% fun because we cannot be doing refunds, man!

But for real, the line is up is literal fire. Doll Skin, Bear Ghost and Paper Foxes are our favorite Valley bands. They’re all different but fall under the “rock” genre. There will definitely be some funny videos and probably confetti and photo booth. We like to be over the top.

Make sure you head out to Crescent Ballroom on February 23rd to catch the release show for 0% Fun from Fairy Bones! More info on that event can be found here.  To keep up with Fairy Bones, follow on your preferred platform (or all of them)…