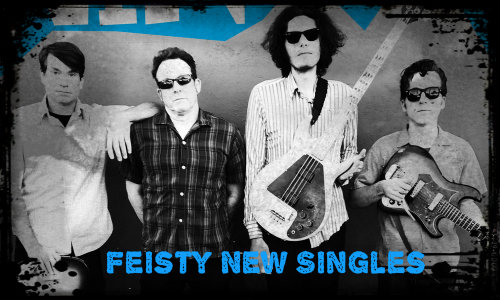 The Freaks of Nature are gearing up for a slick new 45 they’ll be releasing this year through Related Records. The Phoenix band crafts some serious 60s garage rock grit for you 21st Century listeners who want to harken back to an earlier era of music-making, the days of minidresses and wood-paneled sedans. Make sure you stick around for “Now You Say We’re Through”. Truth be told, I might prefer the B-Side track just a smidge.

Sunday At Noon reaches for arena-rock power on their latest single, “Honey”, and they don’t fall short. This new track definitely demonstrates that this band is ready for the stadium-size crowds. Fans who have caught Sunday At Noon can vouch that it’s not the studio punches that brings “Honey” to life but you can head out to Pub Rock on April 13th to catch the band live with Red Jumpsuit Apparatus and find out for yourself (tickets here).

Bummerville is gearing up for the release of their debut LP on Graveface Records later this month. Gritty garage punk and a devil-could-care vocal delivery pair up perfectly on “Time it Takes”. The single might clock in at under two minutes, but it was enough to secure my interest in diving into Bottom Feeder from Bummerville when it comes out on the 26th of this month.

Get ready for the prog-rock powerhouse that is the People’s Blues of Richmond. PBR might only count three players in its ranks, but you’ll swear they have a circus-tent full of musicians to get the amped up sound you’ll hear on “Cocaine Powder”. Or, maybe the song’s narrative topic is more than just a funny story…. Anyway, People’s Blues of Richmond originally released an acoustic version of this song on their album Good Time Suicide, but they decided to revisit with some electrifying folk-punk energy and I’m certainly glad they did.

“GroovyLove” is the opening song from ParkBench’s 3-track s/t debut which came out in December. Despite the hippie leanings suggested by the title, ParkBench has some suburban garage punk angst that comes through on the instrumental end of this song more than in the lyrics. If you like your punkrock lofi and rowdy, check out GroovyLove by ParkBench from Gilbert [AZ].