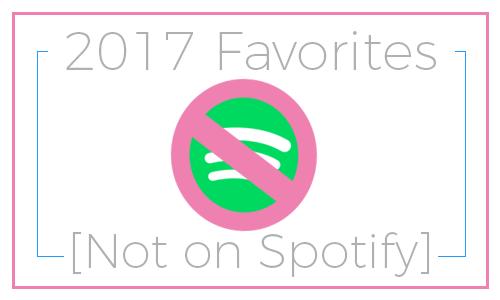 Let’s go back to YabYum’s core principle: connecting new artists to new audiences. What does that mean exactly? It means we want to help artists on the rise. We like hearing those first demos, those debut EPs, the music video your friend helped you make over the weekend. We’re certainly not above it. We live for it.

And, so, even though we’re focused on moving forward this year with new endeavors (podcasts! playlists!), we’re not giving up our core values. We still want to be the first to cover your band and we still want to be the publication that doesn’t care about your Facebook “likes” or how much you spent on recording your single.

So here are our 2017 favorites that you can’t find on Spotify (at least not yet). We love Bandcamp, Soundcloud, and YouTube for their accessibility and we’re not leaving them out in the cold this year.

The SunPunchers 2017 album Levity just blew us away. Brooding, breath-taking Americana from start to finish.

Every damn song is so good off the 2017’s Make It All Right EP from Nanami Ozone. The chorus of Sophie and the boys crooning “I only want to have fun” on “Careless, Wow” might just pop in your head at 3:00 in the morning so beware. With new tracks recorded at Midtown Island in Tucson, we’re eagerly anticipating our next fix.

Although we really, really love the new Andy Warpigs album, Counter Culture-Shock! from start to finish, there is a special place in our hearts for the anthemic track “Bowie Kids”.

Lumberjerk Records pulled together a rather stellar group of local heavy hitters for their first compilation: STRAIGHT OUTTA COMP Vol. 1. Let’s hope there are plans for Vol. 2 in the works…

If you’re not a Travis James fan, than get da fucc outta here. Equal parts fun and dismal (and I’m describing both the songwriter and the music), TJ+AAA teamed up with Diego Galvan for a stellar split release: Hostility​/​/​Heartbreak. Get on this release for pop-punk with extra grime.

The Breakup Society
“Slow Day at the Outrage Factory”

Released by Onus Records, The Breakup Society’s “Slow Day at the Outrage Factory” is  jangly garage pop at its finest.

Just one of the many stupendous releases from Tucon’s Baby Tooth Records, The Wanda Junes create magic on their 2017 release Kinship. Tracked at 513 Recording, it’s the hidden gem of the year.

Young Mothers
“They Were Right”

Zach Toporek and his band, Young Mothers, returned with two new singles in 2017 and they sound better than ever. Just as snarky as his “Come On, The Cross” days, lines like “I’ve got a big fucking problem with all the little things” demonstrate Zach’s lyrical prowess and perk our hopes up for more releases in the future…

Wooden Tooth Records in Tucson released this sweet 7″ featuring Whispering Wires and Free Machine. The vinyl version is, of course, limited edition so score your copy while you still can.

Geez, it was just the year for super cool split releases. This one, featuring Snailmate and Genre, is a fun and feisty EP that was put out in April. We’ve been rocking it ever since.

French for research, Recherché is the latest compilation put out by Related Records. This record label has been on the front lines of the movement to keep Phoenix weird way before it was ever a hashtag. Even before hashtags.

We were sad to see Good Friends Great Enemies part ways but they gave us one final present in parting: Esoterica.

Submerge yourself in the dark and mystical sounds of Tucson’s Burning Palms. The band released False Prophet in September but you still might be able to  land a copy on cassette if you act fast!

What can we say about the Sturdy Ladies other than that they’re awesome  AF. While we certainly hope more tracks appear on the horizon, our hunger is assuaged with both “Secret Weapon” and their other brilliant track, “Cat Olympics”. Listen below — I dare you, I dare you.

Laura Jean Anderson
“”Wont Give Up On You” (Live @ Kingsize Soundlabs)”

Laura Jean Anderson’s riveting performance from Kingsize Soundlabs was originally featured in one of our “Live Music Video” posts and her haunting performance stayed with us ever after.

These feisty youngsters don’t hold back on their 2017 album, They Don’t Think It Be Like It Is But It Do. This funk/punk powerhouse is pure purge of all that Post-Human discontent.

This early single from Justin Moody’s forthcoming album should offer you a little bit of hope for the year. Afterall, it means there is a new album due out from the Phoenix songwriter.

The Venomous Pinks
We Do It Better

The Pinks are back, kicking ass like usual. Released on SquitHat Records, We Do It Better has all the face-punching punk-rock energy we’ve come to expect from The Venomous Pinks.

Dadadoh’s 2017 album You Can’t Rap Forever is a huge departure from his previous work and we couldn’t be more impressed. With all the instruments played by the artist himself, think about that as you rock to his rad rhymes as well..

Flower Festival released two singles this year in an ongoing effort to tease fans while still refusing to put out a full-length. We support Flower Festival’s right to make their own decisions, but….

The Echo Bombs are a crowd favorite and their single, “Donnie”, manages to capture the spirit and energy of those live performances. If you haven’t already, add The Echo Bombs to your list of bands to see this year.

Hesperus
Dark Corners In My Circle

Avant-garde, experimental art rap made right here in the PHX. Really, I don’t think I should have to say anything more than that. MC/DC adds the lyrical finesse that really makes this album stand out.

Captain Squeegee is more than just a band. It’s a Legacy, a movement, and, in recent years, a multimedia experience. That’s because Captain Squeegee sets their singles to sweeping visuals in their music video productions. This year brought us “Our Children” which was directed by Danny Torgersen & Cory Davis.