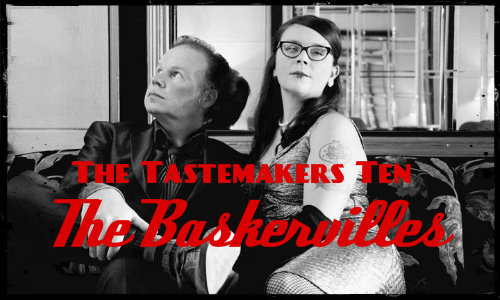 Megan and Shane Baskerville are two of the coolest rockers in the Valley Metro Area and, if you haven’t heard of them yet, chances are it’s because you’re just too old. This duo is helping shape the future of Arizona music through the School of Rock. The Baskervilles opened their first musical education center in AZ back in the summer of 2012 and have been shaping the wily rockers that are now making their way across stages both here and beyond.

And, they also happen to be super rad rockers in their own right. Yes, Shane and Megan Baskerville are founding members of the neo-soul force that is Aunt B, in addition to being educators and musical #tastemakers. As in both their professional and creative endeavors, the Baskervilles decided to tackle their Tastemaker’s Ten list as a team. Now, that’s real love.

Note from B: Our house is filled with music all of the time. When Megan cooks, we have the record player on or we have the guitar out writing songs. Here are a few of our favorites that inspire us and fills us with happiness.

The simplicity of the piano and voice is very moving.

Sam Cooke
“Nothing Can Change This Love”

We got married to this song at the Stax Museum of Soul in Memphis. This song always has and always will move us.

From the intro to the acoustic guitar chords when it kicks in…this is one of the best “Hair Band” songs ever! Throw your fists up and sing along!

The Band
“The Weight”

Megan says, “THIS SONG IS PERFECT!” also, with this version…you get Mavis and the Staple Singers! Perfect segue to the next song.

Mavis Staples
“You Are Not Alone”

This song is a warm embrace on a hard day.

One of the songs that made me pick up the guitar and want to be in a band.

Durand Jones and the Indications
“Make a Change”

We found him when we started Aunt B. He just started and now he’s blowing up and a totally nice guy. He’ll be at the Valley Bar March 23rd. Don’t miss it!

[Shane] I’ve always wanted to cover this since before I played guitar. We’ll get to it. But this song’s lyrics and melody are amazing and moving.

Roger Miller
“King of the Road”

The Clash
“This is Radio Clash”

This is the coolest band that has ever lived. We could have picked any song and it would have worked. This song though really embodies today’s style of music mixing EDM, electronic, punk and funk. This band really bridged all the styles together.

And, for good measure, let’s include one from Aunt B!