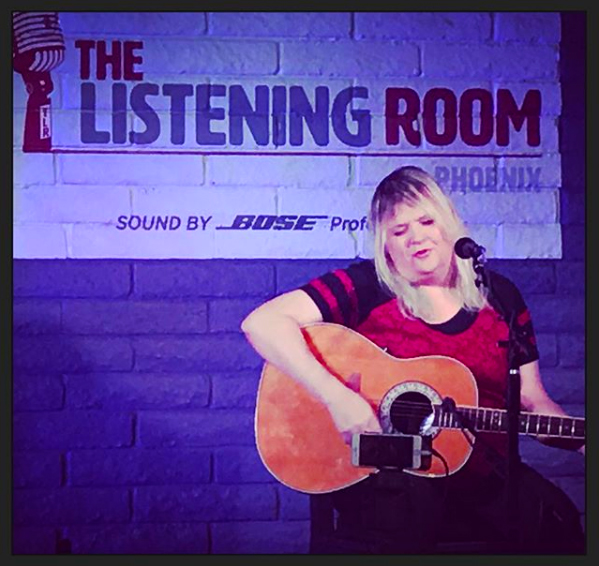 Listening to Cait Brennan perform in The Listening Room Phoenix proved a hallmark moment in my journalistic career. The power and versatility of her voice commands attention and this venue is an ideal setting (#sponsor). Check out Cait performing “Bad at Apologies” for our Songs from the Listening Room series and read our Q&A with her below..

“Bad At Apologies” is pretty much a true story. In the spirit of professional wrestling I figured it’d be a little funnier to cast myself as the villain, so I exaggerate my fiendish crimes a bit, but it’s mostly just the facts. I started seeing somebody not long after they’d split from someone I really like and consider a friend, and even though I had nothing at all to do with the split, I still felt like a huge jerk for doing it, and so naturally I had to write a song to announce that to the world.

Mostly written it in early 2016, the bridge part was written in December at Ardent Studios in Memphis literally about ten minutes before we recorded it; I was still calling out chords to my collaborator/co-producer while we recorded the version that’s on the album.

For the most part, it’s more like channeling than actual composition. I’ll suddenly get some complete or nearly-complete idea for a song in my head, and I quickly play or sing it into whatever recording device is handy. I try really hard to keep editing to a bare minimum–I sing whatever comes out and I try and leave it alone. It’s a weird process and I don’t claim to understand much of it.

On my current album Third, the final song on the album “Goodbye Missamerica” is entirely spontaneous like that; we just took the original home-recorded improv demo to Ardent and added drums, bass and Mellotron, otherwise it’s untouched. Whenever I try to intentionally write a song, absent the weird inspiration/”channeling” thing, it’s usually brutally awful, so I just try and stay out of the way.

I’m very streaky. I’ll go a year or two without writing a song sometimes, and then sometimes I’ll write ten a week. We recorded my first album Debutante in July of 2015, and five months later we’d nearly finished a second one; by June 2016 we had yet another one in progress and then in December we went to Memphis and recorded Third, also completely from scratch. It was an insanely productive time. Since then I’ve been kind of on a writing break, but it’s been starting to come around again, so maybe 2018 will be another rush of songs.

I think in the sort of classic sense, Bowie, Prince, Harry Nilsson, Judee Sill, and Kate Bush are the songwriting influences that I hear the most in my songs or tend to get singled out a lot, and I love all those people so much. But I’m not much of a sentimentalist and I’m basically always listening to recent music–lately a lot of Lorde, Shamir, Janelle Monae, Michael Kiwanuka, Frank Turner.

Music for me is a way of understanding and dealing with life, and life 50 years ago has nothing to do with what we’re all going through now. Rehashing the past to death or worshipping some long-gone and probably fictional golden age is a waste of everybody’s time.

We’re just about to finish up the next album, which should be out probably around the middle of 2018. It’s weird and different and I think it’s the best thing I’ve ever done. But we’ll see in a few months, I guess.