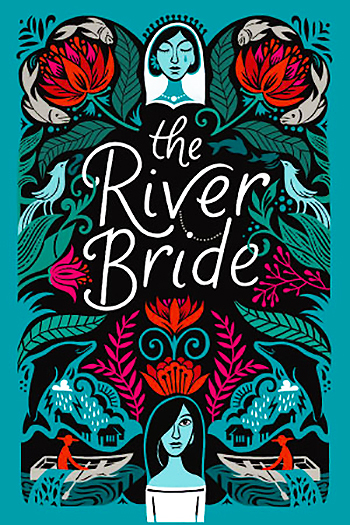 This week, around the Valley, children will return to their parents’ homes, families with gather around dining room tables, and proclamations will be made about what they’re thankful for this year.

Then, over a handful of hours, old resentments, grudges, and disappointments will be removed like grandma’s china from the dining room cabinet and laid out in orderly patterns, just like happens every year. If, between the jellied cranberries and screaming diatribes about “just giving the President a chance,” you find yourself in need of a respite, the Arizona Theatre Company would be excited to offer you the option to see a return they are thankful for.

Last week, ATC opened the second show of their 51st season, Marisela Trevino Orta’s The River Bride which was recognized with the company’s National Latino Playwriting Award in 2013; a tale in which familial resentments, grudges, and disappointments take center stage.

Orta’s story, the first of an intended “grim Latino fairy-tale cycle,” is one of those plays that, like the best bedtime stories, feels both immediately familiar and strangely menacing at the same time. Set against the Amazon and drawn like river water from Brazilian folklore, the story concerns itself with the Costa family; especially its oldest daughter Helena and her younger sister Belmira.

As the play opens, it is three days until Belmira’s marriage to a local fisherman, which is the most exciting news in the household until a strange man is pulled out the river in Senor Costa’s fishing nets. From there, for the next hour and a half, Orta takes us on a cruise through themes of jealousy, love (romantic and otherwise), loss, loneliness, mystery and regret. 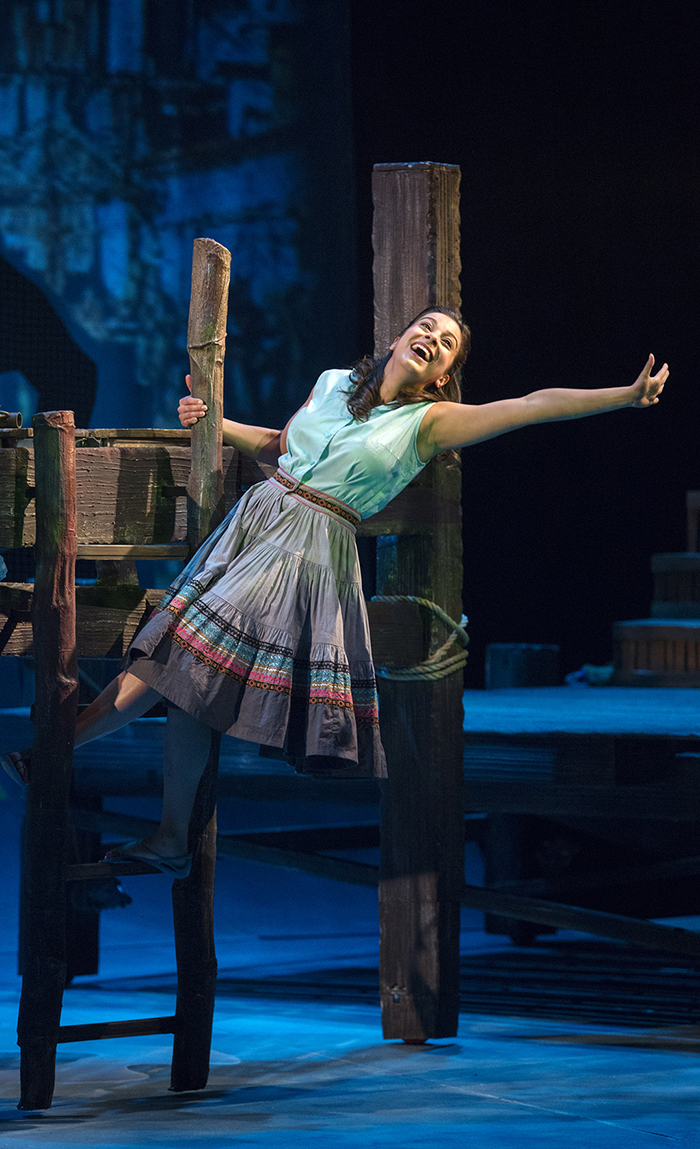 If that sounds like a downer or a buzzkill, well, frankly it kind of is. But as downer buzzkills go, it’s a moving and haunting one, even if not every theme is given equal measure. Under the direction of Kinan Valdez, The River Bride is a balance of successes and near-misses, but the overall effect is still a powerful one.

Regina Garcia’s scenic design is a highlight. A handful of simple wooden pieces slide away or silently fly in as needed, moving action from the family home to the docks nearby in less time than it takes to realize that it’s happened. It feels like the way things move in dreams, and that dreamlike quality is a large part of why this fable is so effective. Shows probably shouldn’t be recommended on the virtue of their sets alone, but when the set is this good – and used this well – it’s easy to be tempted.

However, as impressive as I may have found Garcia’s set (and here I should mention David Lee Cuthbert’s lighting and projection design as well), it wouldn’t be much of a fairy-tale without characters, and Orta’s story is told by an impressive cast. The sisters at the heart of the story form a strong core. Paula Rebelo’s Belmira deftly walks the line between wide-eyed ingenue and the closest thing this story has to an onstage antagonist. You want to slap her, and you want to see her happy, and, in that, her “little sister” game is strong. Sarita Ocon, on the other hand, is easily believable as the older sister who long ago got used to bowing to Belmira’s whims, and it’s not hard to find yourself rooting for her. 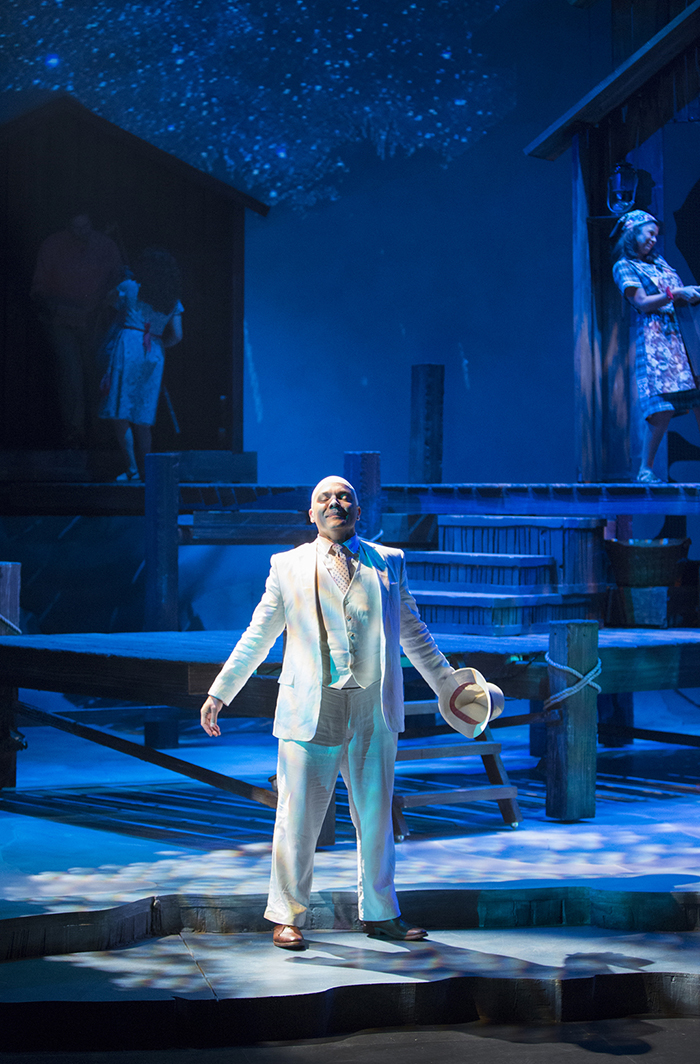 Dena Martinez plays their mother, and in the manner of mothers in fairy-tales, Senora Costa is suitably wise, warm, and patient, but it’s in her husband, portrayed by Leandro Cano that the cast finds its standout and the production finds its most satisfying element. Cano’s Senor Costa is a hulking bear of a man and the evergreen love of Helena and Belmira’s parents is, without question, the most infectious element of the show.

Unfortunately, the production’s central love story, and the mystery surrounding it, aren’t the same unqualified success. As far as the mystery goes, we’ll avoid veering into spoilers here, but Orta’s script won’t make you wait long for the goods. The identity of the handsome stranger won’t be stated out loud until near the end of the story, but it won’t take more than a handful of scenes to put the pieces together, which makes it easier to focus on the love story, which isn’t to the production’s benefit.

Ocon’s Helena is both stalwart and sacrificing, and Hugo E. Carbajal as Moises, the bandaged and amnesiac stranger, is both charming and engaging, but the connection between them feels more like the beginning of a beautiful friendship than a passionate romance. They’re both likable and trustworthy, so when they say they’re in love, I guess I believe them, but you’ll have to take their word for it.

The production isn’t heavy on surprises, but fables seldom are, and what is here is presented in a way that seems both fresh and familiar, comfortable but not safe. Disney, this is not, and no guarantees are made for a feel-good ending, but if you don’t let that deter you, you can not only catch a great show this weekend, but maybe get a few hours away from the debate your cousin is having with your uncle in front of the TV.

The River Bride continues at The Herberger Theatre through December 3rd. Up next for The ATC is Man of La Mancha which promises to be a highlight of the season. Tickets to both shows (and others) are available through the Arizona Theatre Company here. 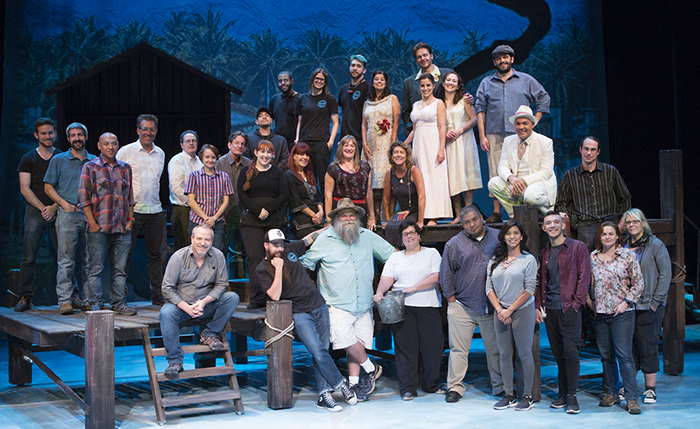 Cast and Crew of The River Bride | Tim Fuller